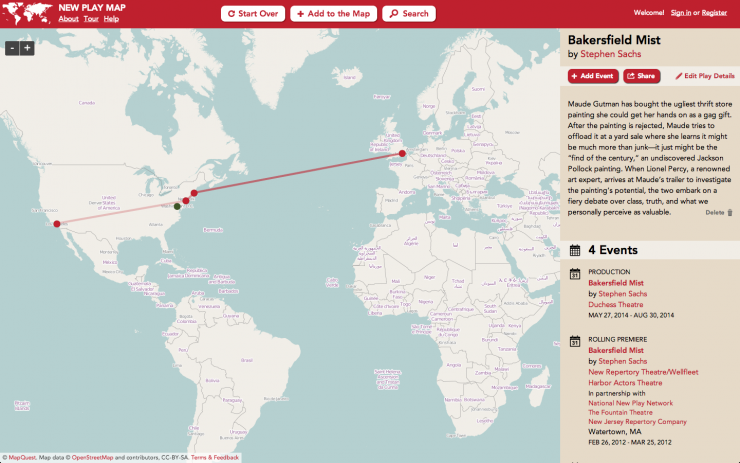 (Click on the image above to view the interactive new play journey of Stephen Sachs' Bakersfield Mist on the New Play Map.)

1. How did the different communities (creative team, location, audience) influence the development of Bakersfield Mist?
Each NNPN Rolling World Premiere taught me something valuable. Each creative team brought something new to the table. Each company of artists contributed meaningful insight and feedback that helped shape the script as I continued rewriting. Not surprisingly, the different pairs of actors in each production offered the most influential input as the script developed. Actors are extraordinary creatures. Each pair of actors who performed the play at each theater contributed to the development of the script. But the audiences in each city were the final arbiters. Overall, having the play produced by three different companies in three different states serving audiences in three different communities demonstrated to me that the story worked wherever it was performed. The play did well and was extended at each venue it was produced. It was popular with audiences in each community where it was presented. That reinforced the hope that the characters and story were universal and the play would have a long future life. 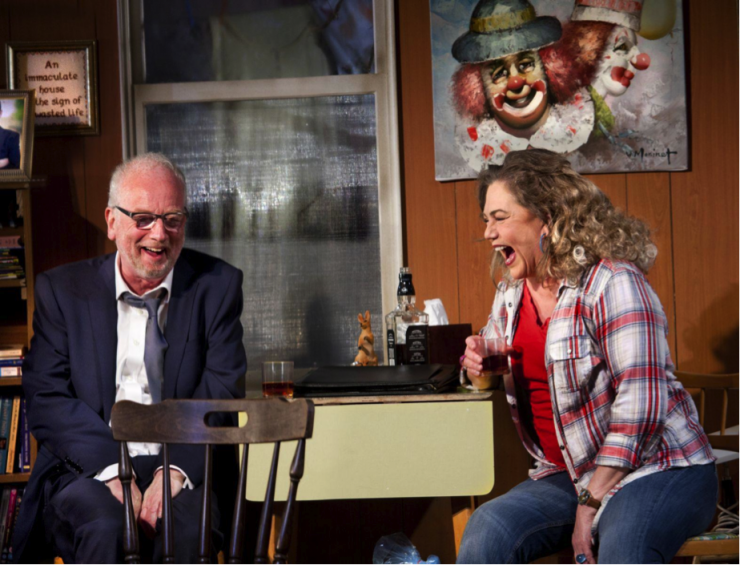 2. Did you rewrite after the first premiere? Second?
Yes, absolutely. I continued to tweak and massage the script after each NNPN Rolling World Premiere based on what I learned from each production. That’s the purpose of the NNPN program: to provide playwrights the opportunity to monitor the growth and development of a new play over the course of three productions. Tremendously valuable. I was rewriting Bakersfield Mist throughout the play’s entire three-year journey from world premiere to regional productions and now the London opening. I did an entire rewrite before going into rehearsals in London based on what I learned in the previous NNPN productions and then continued tweaking the script with the London cast right up to opening on the West End. Sometimes it seems that the playwriting software Final Draft is a misnomer. There is never a final draft. 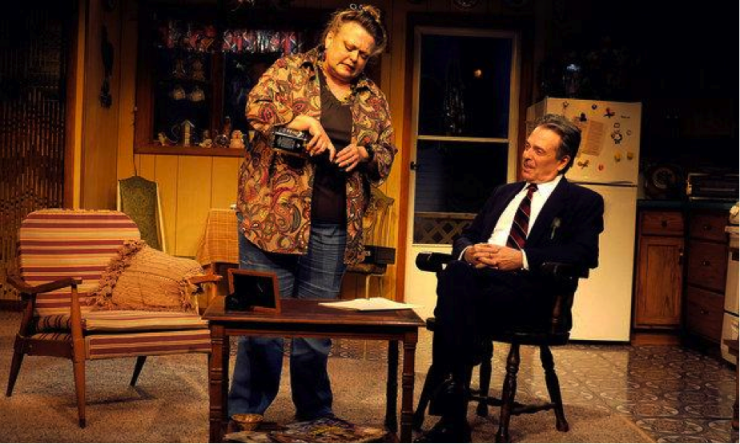 3. What’s one valuable experience you had during the rolling premieres that made a significant impact on your process?
One memorable moment that stands out for me personally was an instant I experienced in the rolling premiere process. I was sitting in the audience watching the play being performed in the third production of the NNPN Rolling World Premiere. The audience was having a good time. They were laughing and enjoying the play. And I remember one very specific personal moment I experienced for myself, as the playwright. Watching the third set of actors perform the play in the third city of the NNPN Rolling World Premiere, I remember very clearly when it suddenly hit me—that I could see it and experience it for myself—that the play would have a future life. And that happened because I was able to take part in and see three productions of my play, one after another, in different cities with different audiences, and be part of the reaction. The NNPN Rolling World Premiere program provided that experience for me. And I will always be grateful. 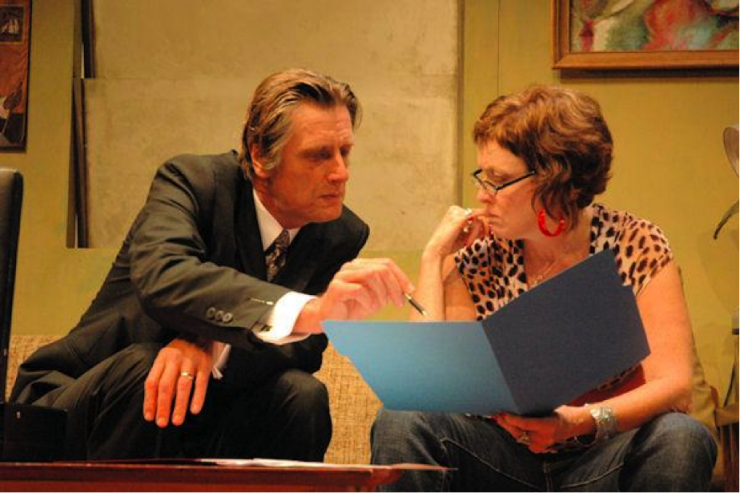 4. How did your existing relationship with NNPN (through the National Showcase and through The Fountain Theatre, an NNPN member theater) shape the path of your NNPN Rolling World Premiere?
My theater company, the Fountain Theatre in Los Angeles, has been a core member of NNPN almost from the very beginning. So my relationship with NNPN has been ongoing for many years. And Bakersfield Mist turned out to be an example of the NNPN new play process successfully accomplishing what it was created to do. The play followed the standard journey through the NNPN pipeline. First, it was read at the Showcase of New Plays at Curious Theatre in Denver, Colorado, in front of a full house of NNPN members and artistic directors from all over the country.  From that reading, the script was then chosen by three NNPN theaters for productions as a Rolling World Premiere. The NNPN Rolling World Premiere opened at the Fountain Theatre in Los Angeles in 2011, and then continued at New Jersey Repertory Company in Long Branch, and Boston’s New Repertory Theatre in 2012.  It was then optioned by Sonia Friedman Productions, a commercial producer, and is now running on the West End in London starring Kathleen Turner and Ian McDiarmid. It is also now being published and will soon be produced across the United States. The script has been translated into other languages and is being produced around the world, all of it starting from a simple reading three years ago at an NNPN Showcase of New Plays in Denver. What a ride it has been, and continues to be.

And what a treat to have Bakersfield Mist here at Curious for the National Showcase Stephen, thanks for mentioning it! I know that the Denver actors who played Maude and Lionel still have a personal connection to the play - it was a treat for us.

As a playwright somewhat new to playwriting [5 years] and attempting to venture into the land of having my plays read and ultimately produced at professional theatres [I do have a play that will be presented as a staged reading at a national new play festival] I'd be interested in future installments of these interviews going into more details on the 'amount' of rewrites that the authors undertake when viewing various readings or productions. Are they making radical and major structural changes, dropping whole scenes, adding whole scenes, or are they primarily doing what I call tweaking [slightly altering the structure of a scene, editing a monologue, changing a line here and there.

In my case with 'Bakersfield Mist', the largest rewrites happened during the opening of the world premiere (naturally) at the Fountain Theatre in Los Angeles and then nearly three years later for the London opening on the West End, with continued tweaking happening in between. For the world premiere in LA, because the play was brand new, I was cutting and reshaping, rewriting lines, moving speeches, adding new lines, smoothing transitions, fleshing out characters. Much of it based on input from our two actors. Smart actors are a tremendous ally to a playwright developing a new script. For the regional productions, I mostly tweaked and massaged the script with each production. Fine tuning. An actor in one production made an important suggestion that helped clarify a monologue. That sort of thing. But then, before going into rehearsal in London, I did an entire rewrite, top to bottom. Fueled by what I learned from the regional productions and informed by dramaturgical notes I got from the London producers, director and literary team after a reading we did with the London cast. That was a major rewrite. A lot of trimming out the fat, leaning it down, removing what was unnecessary or repetitive, getting it as tight and economical as I could. I also wrote entire new speeches and added new sections of dialogue to clarify character intent. The end result from London was a tighter, cleaner script that better illuminated the need of the characters. The London script is the version of the play now being published and performed around the world. But that draft was three years in the making and evolved after dozens and dozens of rewrites over the course of several productions on two continents.

Playwright Donna Hoke writes about an opportunity that allowed her to develop a new play on its feet in advance of a world premiere.