The three-year occupation of Teatro Valle in Rome is now legendary: a spontaneous response to the failures of conventional government in supporting a venerated public theater, and the conversion of the theater into a commons by countless ordinary citizens. Now the mayor of Rome is threatening to end the occupation, evict the commoners, and privatize the management of the facility.

The showdown is a significant moment for the future of a remarkable theater commons and the capacity of local government to either sanction or suppress this alternative grassroots form of governance for a historic theater—the commons.

The turmoil in Rome started in 2011 after the city’s budget cutbacks hollowed out public services and institutions, which left many people without affordable housing. Shady speculators swarmed into the picture to snap up buildings the government was selling at rock bottom prices in order to raise money, as Donatella Della Ratta of Al Jazeera reported.

What’s a victimized public to do? Defy the law and occupy what is theirs. In Rome, former employees of the Teatro Valle, a grand public theater and former opera house, physically took over the premises in June 2011—an act of civil disobedience that became known as Teatro Valle Occupato.

The Teatro Valle Occupato declared, “We are interested in commons, mutualism, co-working and we would like to base all the actions on the quality of relationships. We believe in a world built on bottom up quality processes and we are very interested international collaborations.” 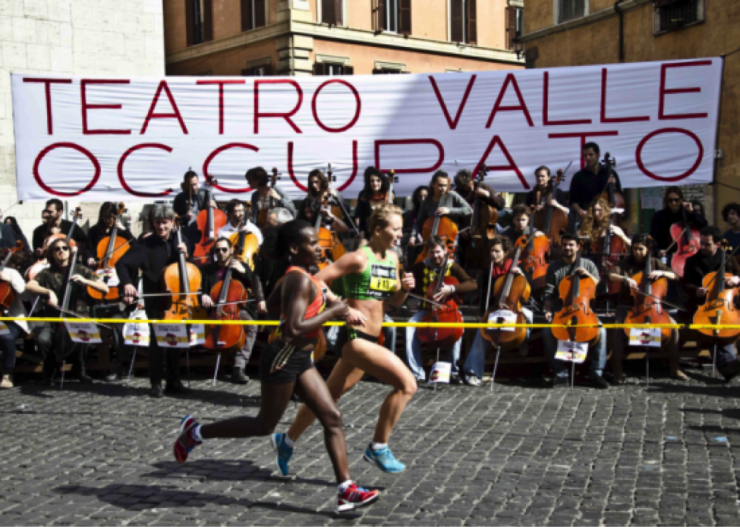 In this spirit, the occupation has sought to reinvent Italian cultural policy by hosting a variety of artistic projects, large and small, and devising new forms of arts-inspired education. It has also organized plays, performances, and festivals of independent theater, children’s workshops, and independent film showings. The commoners have demanded fair pay for workers, affordable prices for performances, transparency in financial statements, and a code of ethics for all theaters and companies. This is Della Ratta's November 2011 account of the occupation.

The Teatro Valley occupation sparked many similar citizen takeovers around the city. In one of the more notable occupations, citizens took over a government building used for motor vehicle registrations and drivers’ licensure. As Della Ratta reported:

Scup (Sport e Cultura Popolare) as the place has been renamed, was occupied, cleaned up and brought back to life by a mixed group of young activists, sport instructors, and some residents of the neighborhood. They were outraged by the lack of public spaces for leisure and sport activities in an area that has become more and more gentrified while rental prices have soared.

A young activist, Carlo, explained: “Occupying is an expression of public outrage.” The city government acknowledges there are now hundreds of occupations of both housing and closed-up buildings. Many are being converted into community centers for cultural activities or recreation for young people:

The oldest [occupations], with a clear militant orientation, have existed for decades. While some of them have been living under a permanent threat of being cleared by the police, others have been legalized and are paying a rent to the municipality, albeit within a scheme of controlled prices. Some others are just tolerated by the local authorities—whether right or left-wing oriented—in a sort of “live and let live” philosophy.

But new occupations, such as Scup or Cinema Palazzo, wish neither to be institutionalized nor to survive by being ignored or forgotten by the local government. They firmly denounce the lack of social services in town, at the same time claiming for their legitimate rights, as citizens and taxpayers, to get health assistance, child care, and infrastructure for leisure at affordable prices.

Valeria and Chiara, two students who occupied Cinema Palazzo, explained that “occupied places do not aim at offering services to the citizenry, but at showing them how knowledge can be built in a cooperative way.” This attempt at creating spaces for peer production distinguishes all the newly occupied places, aiming at establishing open workshops where people can experiment with different ways of doing politics together.

It is a new attitude towards proactive citizenship, which is in sharp contrast with the idea that political representation, obtained through the voting process, can alone defend citizens’ rights. In past years, this idea has resulted in emptying politics of any participatory meaning and turning Italian youth away from it.

Many people seem to have realized that proactive citizenship is the only way to hold politicians accountable and directly claim their “citizen rights.”  Direct citizen action to challenge speculators, absentee landlords and government privatization of the common wealth—this is a remarkable new stage in the evolution of protest. Citizens are coming to realize they don’t just need to stop privatization. They need to enter into commoning. They need active, ongoing self-governance beyond representative government.

The sentiment echoes Occupy Wall Street's occupation of Zuccotti Park. A crowd of strangers proved to be remarkably resourceful in self-organizing and managing essential functions. Commoning almost comes naturally. To be sure, there is a difference between a short-term occupation and a long-term, stable system of management. But the sting of dispossession that comes with market enclosure also focuses the mind and spirit. People are motivated to show that another way is possible. As Della Ratta writes, there is “general outrage at the greed of private interests and the weakness of public sector that sells off common wealth with an excuse of efficiency and rationalization…”

The deep irony is that occupations are, in their own way, the highest form of legality. How’s that? “By taking over places like Teatro Valle, the occupiers claim to have given them back to the citizens. Paradoxically, this would be an act against legality, yet a legitimate one, since it is carried out in order to defend rights and principles granted by the [Italian] Constitution.”

Now the mayor of Rome wants to put an end to the occupation of Teatro Valle. On July 14, the mayor summoned Italian law scholar Ugo Mattei to meet with him to negotiate a resolution. In advance of that meeting, Mattei and Salvatore Settis, President of the Advisory Board of the Louvre Museum in Paris, circulated an international petition calling on the mayor to back away from his proposal to privatize the management of the theater and to evict the commoners.

Mattei and many others not only want the mayor to allow this historic experiment in commoning to continue, but to formalize it in law. This might begin with a temporary, one-year fiduciary administration of the facility by the commoners while final arrangements for legalizing the commons are made. But the political situation remains tense and indeterminate—virtually any outcome is still possible.

well said, thanks, david; yes, the local situation seems quite fluid and any little push (including such articles) could advance a positive outcome for the "occupation" -- and while it's crucial to let the anglophone/global audience about those experiments, it's also very useful for Italian readers as well -- will re-tweet and maybe translate some excerpts :)

Intimacy and Equity: A Balancing Act

Ann James introduces the Rebuilding for the Future: A Convergence of Thought Leaders in Intimacy Practice series with this call for intimacy professionals to build a foundation of equity in the industry by interrogating available mentorship and training structures. This essay begins that work by highlighting the need for a diverse pool of training ideologies and methods; and the interview-based series that follows takes up that need by highlighting the perspectives of eight practitioners who navigate the intimacy industry in a variety of ways.

When Performance Art Is an Anti-War Instrument, Part Two

In part two of his essay, Russian theatremaker Viktor Vilisov delves deeper into the performative nature of war itself and how art can create spaces for collective remembrance and grief.