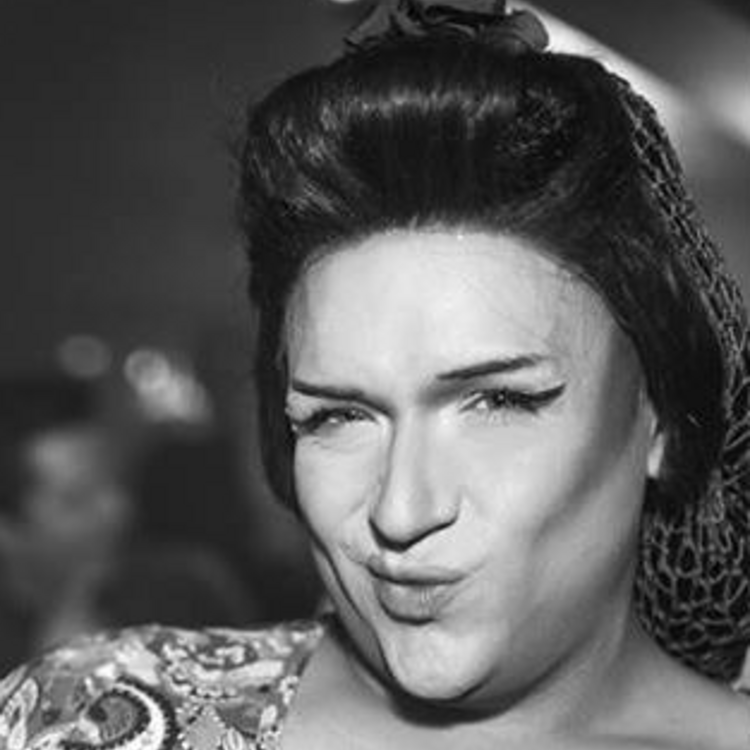 I am student in the Master of Arts in Theatre program at the University of Nebraska at Omaha. During the fall of 2016, I developed a method of documenting and translating my lived experience and ethnographic research into scholarly forms of presentation. My graduate advisor, Dr. Cindy Melby Phaneuf, encourages her students to seek opportunities to proliferate the work of women, LGBTQIAA+ individuals, people of color, and individuals of mixed ability and heritage The following will recount my research project Contemporary Ethnographic Performance Methodologies, which was funded by UNO’s Office of Research and Creative Activity via the Graduate Research and Creative Activities Grant.

I seek to contextualize myself as a unique scholar in the field of theatre arts and performance studies.

During the summer of 2010, I visited London on a Yale University international travel award. My project was an academic and performance based program on Shakespeare and his contemporaries at the London Academy of Music and Dramatic Arts. I foolishly thought that somehow I would be able to gather some knowledge and skills performing in drag, or at least playing female leads; however, my performances were called “too campy.” After class at LAMDA, I partook in a self-guided extracurricular exploration of London’s queer avant-garde nightlife culture. Through these early experiences, I began to view my research through an ethnographic lens. I began to wonder, why aren’t there spaces and events like this in Omaha? What makes it different in the UK versus the US? How can I create performance that is meaningful and impacting?

This is why I began to develop my ethnographic performance methodologies. “Ethnographic” describes the study of world creation and identity-making. “Performance methodologies” is a method of compartmentalizing the different performed sensibilities into thematic topics or media. To understand my approach, you must think of academia as a collage of contrasting disciplines. Ethnographic studies, through my lens, focuses on documenting the micro and macro level details of any given community or persons’ constructed society and the different forms of media that they use such as folklore, dance, fashion, etc. Thusly, my works seeks to bind together a catalogued understanding of inspiration, execution, and future impact. As a theatre maker, I am interested in the many aspects of production, from rehearsal techniques to minutia in costuming.

Through my ethnographic research, I reflect on the intersectionality of my many identities and a variety of different academic disciplines: performance studies, gender studies, and sexuality studies. I identify as someone on the trans spectrum, which is an inclusive way of saying how an individual experiences and or expresses their gender in a non-normative way. For example, I specifically identify as bigender. As someone who was assigned male at birth, I describe my gender presentation as being masculine to feminine. When I wake up in the morning I am male; through self-styling, fashion, and cosmetics, I present as female when it is suitable and safe.

Performance studies is incorporated into my research because of its interdisciplinary nature. I am interested in artists and scholars that produce contemporary work in fields including: nightlife performance, LGBTIAA+ culture, ethnic/heritage performance, dance composition, theatrical adaptation, sex performance, and gender performance. I am drawn to contemporary scholars dedicated to capturing the LGBTQIAA+ experience. It is important for me to reference literature in a variety of fields to lay the groundwork for this essay. I want to provide a network of access to information that doesn’t exist in Omaha, doesn’t exist in Nebraska, and doesn’t exist in the US.

During my literature review, I gravitated towards Andrea Beckman’s book The Social Construction of Sexuality and Perversion: Deconstructing Sadomasochism. I appreciated her writing from the start: “This book aims to deconstruct the social construction of ‘Sadomasochism’, revealing it to be a mystification of social reality via insights into the ‘lived realities’ of consensual ‘SM’ practitioners obtained through ethnographic research of the author.” At an early point, I acknowledged how crucial it would be for me to focus my research on investigating the terms of social construction and “lived realities.” Beckman inspires me to view myself as both a participant and researcher in the field; I must learn about these spaces and performances by attending and experiencing them.

In the book Cultural Struggles: Performance, Ethnography, Praxis, Dwight Conquergood articulates that, “in everyday communication, people reconstitute culture as they articulate or imply the premises upon which they predicate, and the value by which they assess, their own social performances as well as those of their co-actors.” Conquergood’s reference to this “everyday communication” caused me to reflect on gender presentation as a form of performance and presentation of oneself.

An example of a performance and enthographic scholar and a research interest of mine, Dr. Madison Alexander Moore engages with queer, black nightlife culture in the form of voguing and “fabulousness” and its study in London and Berlin. Our interests intersect when it comes to London club kid nightlife. During my most recent research trip to London in Fall 2016, I was able to meet with Moore at a variety of different nightlife establishments.

Our first meeting was Freedom Bar Soho, where we mused questions about nightlife and its scholarship, from where the next up-and-coming city or establishment will be located, to whomever would be the promoter or producer. Then he and I met at Dalston Superstore, a place that is a restaurant by day and discothèque by night. I categorize Moore’s ethnographic performance methodologies as focusing on avant-garde nightlife scholarship, the study of voguing as performance, nightlife and club culture’s contextualization in modern urban settings, and self-styling. In an essay titled “The Infectious Queerness of SSION” in QED: A Journal in GLBTQ Worldmaking, Moore discusses Fiona Buckland’s comment on self-styling for clubgoers and nightlife entities as “acts of bricolage—putting things together to form more than the sum of their parts, sometimes working striking juxtapositions.” This notion of bricolage as compared to self-styling is fascinating. As I reflect on my personal journey of self-styling when I was younger, and just out of university, I had to use creativity and artistry to fashion together “looks” for the evening by shopping vintage, retailoring garments, and upcycling different pieces of jewelry and accessories.

While in London one night, I attended a party called “Savage” at club Metropolis hosted by a performance group called Sink the Pink. As you can see in this image we were a vibrant crew, in certain spaces gender knows no bounds. When it comes to Metropolis’ multi-level palace of debauchery, party goers must climb the first glass staircase to the cabanas with dancing poles and metal chain curtains. The very top level was completely covered in six inches of sand from the beach, not very safe for stilettos. One of my tried and true transperformance methodologies is to carry around a hand fan, it helps accentuate my dance movements, and gives a feminine flourish while keeping cool on the dancefloor.

Our next contemporary performance scholar is Dr. Joseph Mercier, a performance artist and choreographer. I first met Mercier in the summer of 2010 at a nightlife event at Eagle London, a gay fetish bar with different nightly events in London’s Vauxhall, where there was a Wednesday night wrestling event. This particular event was quite interesting because of the contrasting experience of either watching patrons participate in the wrestling or getting in there and wrestling yourself. Meeting Mercier and learning about his background compelled me to think about the construction of masculine gender and sexuality in new and profound ways.

Mercier, like Beckman, is a scholar and performer of BDSM (bondage, dominance, and sadomasochism) and bodily practices. Mercier has several groundbreaking pieces that combine multiple performance genres. The Rite of Spring (2013) which he conceived and performed in is a modern adaptation of the 1913 score reduced to two performers physically sparring in MMA style combat. This managed to capture the blood, sweat, and tears of the production; it was only performed once, due to the grueling wear on the performers. Later Mercier brought us Diaghelev on the Beach, which deconstructs choreography and instead spits in your face with fetishized ‘rituals’ and statuesque positions. All of his pieces come out of this ethereal dream or nightmare-like state, dancers floating in planes that disturb the audience’s understanding of bodily practices and societal norms. Mercier informs his performances with athleticism, fetishization, and intimacy.

It is apparent to me that I need to document my lived experience in a way that will be resilient and fit within the scheme of academia at large… I come to this from the world of theatre, because I want to study the performative nature and narrative of human beings through participant observation.

I have used the texts of Johnny Saldaña, Ethnodrama (2005) and Ethnotheatre (2011), to create an understanding of ethnotheatre. This art form will be crucial in constructing a stage piece at the end of my research.

I write about the social construction of my gender, sexuality, and romantic orientation because of my lived experience as a bigender, masculine to feminine person. As I attend events and seek relevant research in ethnographic studies, it is apparent to me that I need to document my lived experience in a way that will be resilient and fit within the scheme of academia at large. I identify as a drag performer, but not as a drag queen, and I identify as a transperson, but not as a transwoman. I come to this from the world of theatre, because I want to study the performative nature and narrative of human beings through participant observation.

The study of Western theatre, vaudeville, cabaret, burlesque, and fashion parties all inform what audiences seek to enjoy after the sun has set. My interest in HowlRound lead me to contemporary playwright, Ariel Zetina, whose play British Honduras Fantasy has inspired me to support her work and stage a production. In Zetina’s piece she is able to bring up themes of the transgender lived experience, LGBTQIAA+ suicide, violence against transpeople, and immigrant identities via the use of magical realism.

I am excited for what the future holds. I intend to continue seeking specific opportunities to share the works of Joseph Mercier, Madison Moore, and Ariel Zetina. Thank you for allowing me to share a variety of different scholars and their work with you all.