The Caregiver’s Desire—“I want something good for you.”

In this blog series, I am articulating seven cogent alternatives to the Hero's desire--multiplying not only our sense of what desire can be but also the responses our characters can have to it. Throughout the series, I will provide character examples from existing scripts, which already hold clues to these alternative forms of desire and responses to it. I will cite examples from both stage and screen plays. In this second installment, I will examine The Caregiver's Desire.

Once in a graduate screenwriting seminar, a colleague declared, "People act for selfish reasons. There is no such thing as altruism." Sadly, this was taken as fact and met with nods. Worse, this bald assumption seems to lie at the heart of much dramatic writing—and production—for both stage and screen.

In Backwards & Forwards: A Technical Manual for Reading Plays, David Ball goes so far as to assert:

"A human being talks in order to get what he or she wants….What a character wants motivates talking…. Not everything in drama mirrors real life, but this does….Whether I want something determines whether I talk. What I want determines what I say….The baby is thirsty. He wants to drink….the tyke screeches, 'Wawa!' or 'Mama!' Thirty years later he is capable of more articulate expression….In both cases the obstacle is dealt with by talking."

Essentially, Ball is arguing that humans never mature out of meeting their own selfish desires through speaking. He claims this is true not only of our characters, but also of all human beings everywhere, no exceptions. In what other field are such outrageous claims made, unsubstantiated, and taken as fact?

The notion that every character—and every person—is acting in their own self-interest is an assumption we can't afford to leave unexamined in the theatre world. Do we really believe this about all people? All the time?

What about the mother in Ball’s example? Does she speak to get what she wants? Or does she speak to meet the desires and needs of the infant? Often, the Caregiver is considered peripheral to the story, because her will is not driving the action. Or rather, she is supporting the Hero in his getting what he wants on his own Hero's Journey.

In recent years in America, Heroes in our scripts have reflected less and less good will. As the Antihero has taken center stage in plays, films, and TV shows (e.g. Carlos Murillo’s Dark Play or Stories for Boys, American Psycho, and Mad Men), we have embraced selfish behavior as the defining characteristic of a protagonist—whether or not he seeks to save anyone in his community, as Heroes of old did in Oedipus Rex, Antigone, and Towering Inferno. This modern focus on the Anti-hero has made the contrast between the Hero’s desire and the Caregiver’s desire starker than ever. 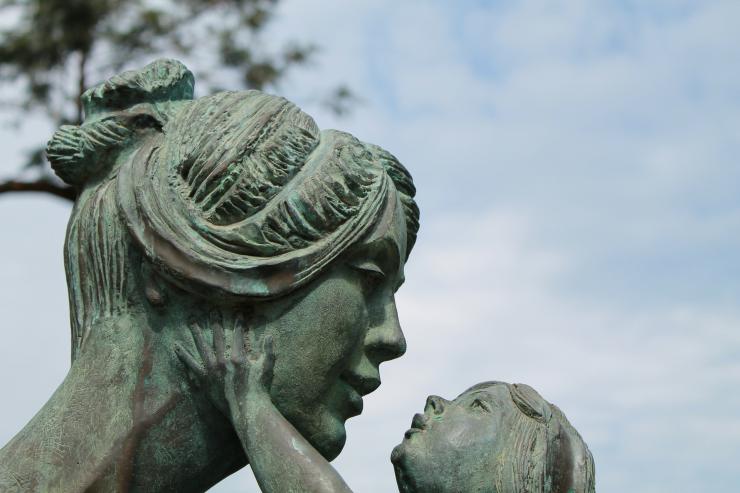 The Caregiver's desire differs fundamentally from the Hero's desire. Whereas the Hero wants something good for him/herself, the Caregiver wants something good for another. The Caregiver can act selflessly on behalf of others in order to help them get what they want. The Hero can bring back the "boon" to help his community at the end, but his own process of individuation motivates him to take the journey in the first place. Plus, everything that prepared him to make the journey was provided by a Caregiver.

In my life, I have encountered so many Caregivers willing to give their time, energy, intelligence, and warmth for the good of others. Our stories should be able to reflect their lives without turning them into Heroes, or making them peripheral to Hero's Journey stories.

To design a story with a Caregiver at its center would require an entirely different conceptualization of why those characters (and some people) act the way they do, for the good of others.

So, what clues do we find in existing scripts for the nature of the Caregiver's desire? The character Ouisa in John Guare's play Six Degrees of Separation offers an example of the Caregiver's desire in a dramatic text. She genuinely cares for Paul and connects more readily with him over the course of the play than with her own biological children. In their phone call toward the end, she urges him to turn himself in to the police, but not for selfish reasons. She wants what is best for him. Ouisa wants to help Paul, to give care to our misguided Hero. Her husband Flan has a self-centered view throughout the play, which causes Ouisa to finally tell him, "We're a terrible match."

Then, the mother in Richard Linklater's film Boyhood is an even more pronounced example of the Caregiver's desire. In her case, she devotes her entire focus to the will of her son (a Hero). Her focus on his desire is so intense that when it’s time for him to leave for college, we get the sense that she won't know what to do with herself after he is gone. For Caregivers, altruism can morph into this kind of martyrdom, in which the Caregiver relies on the Hero to have any will at all. Her wish, "I want something good for you," can be a reflection of deeper, less generous thought—"I have no idea what I want for myself." In these cases, the Hero getting what he wants is not separable from the Caregiver getting what she wants. Even though not all Caregivers are mothers, mothers may be the most prevalent Caregivers in our stories; their journeys, though fraught, are often viewed as peripheral to the Hero's.

Whether altruism exists is still very much up for debate, especially in the world outside of theatre. Assuming off-hand that altruism does not exist reveals a deep cynicism about human nature and gives us (and our characters) a convenient excuse to stay locked in our individual, selfish pursuits. To design a story with a Caregiver at its center would require an entirely different conceptualization of why those characters (and some people) act the way they do, for the good of others. The playwright, director, actor, dramaturg, and producer would all then need to see that a character can act to meet the desires of another, and that the Caregiver deserves more focus in our stories.

One quibble aside (see below), I agree with everything you say in this essay and hope that it will inspire people to write more plays (and movies) with emphasis on the Caregiver.

In fact, thanks to MeTV and such in recent years I've had the chance to re-watch some of the shows I loved growing up, and I realized that some of my favorite ones are ones where the main character isn't really the hero, but more (to use a term I heard elsewhere a while back) a "travelling angel" who makes peoples lives better. (The classic example usually given is "Pale Rider", where a mysterious traveller on horseback rides into town, helps the community overcome the major force of evil that wants to destroy their town, then rides away.)

One of my favorite shows was "The Fugitive", which while on the surface was about a man who was trying to escape the death penalty by finding the true murderer of his wife, was really about a man who every week came into a different town and by just by virtue of who is he (a very intelligent and wise Caregiver in my opinion) ends up leaving the town better than he found it.

An even more surprising example was "Banacek", which on the surface seems to be about a selfish freelance insurance investigator who has gotten rich from all the commissions he is paid by finding extremely expensive stolen items that others couldn't. But upon closer examination the best episodes are about how he enters a group of peoples lives and by the time he is finished figuring out what has happened at least one of the characters (the main character/hero of that episode) is much better off (whether or not he succeeded in finding the missing item).

For instance, in what is perhaps my favorite episode, Ann Baxter ("The Ten Commandments", et cetera) plays a fifty-ish woman who is certain that she is going to die within the year unless a cause (and cure) for her alleged family genetic weakness can be found. So she has invested her considerable wealth (millions of dollars) in a huge super-computer, which -- even though it takes up most of the inside of the well-guarded building -- is somehow stolen, leaving her with such angst that she is virtually bed-ridden and certain that she has but a month or so to live.

So Banacek (George Peppard) is called in, and after seeing what'sgoing on ends up throughout the episode making her question her assumptions that she is really so sick, and by the end, due to the events of the story [[I won't spoil exactly what happens] he makes her realize that she is fine, and doesn't need the computer or any miracle cure after all. The piece (which for the most part could really work as a play) ends with her full of zest and ready to get the most out of the rest of her life. (The writer, Peppard, and Baxter do it much better than I'm able to convey here... check it out sometime if you get a chance http://www.imdb.com/title/t... )

Postscript: The quibble I mentioned above? Despite all the hype I'm not a fan of "Boyhood", nor do I agree with the assessment that she is a caregiver and the boy is (as the title would imply) the hero. To me the story was about a woman who realized far too late that her first husand was the best, and her constant attempts to "find somebody better" (to use a phrase that over the course of my life I've heard far too many attached woman use!) simply resulted in her marrying a string of worse and worse men, finally ended up with nothing. But then to avoid that downer ending, and to justify the title, they tack on the pollyannaish ending whereby The Boy, within literally five minutes of setting foot on campus gets a great friend, whose girlfriend sets him up with a great girlfiiend, and the four of them set off to experience nature's beauty! (And am I the only one who vomited with how they set that final scene up with a bit of out-of-the-blue dialog just before it about how great computer matching of roommates is these days?!)

Hello, Neal! My apologies for not having replied to this post earlier. It didn't occur to me to check back for comments until recently, so I'm just seeing this! Thank you for the detailed examples you give; indeed, much of the challenge in writing about this will be about finding additional examples in existing scripts. I will certainly add these into the mix. And I agree with you; I hated Boyhood overall. I think it needed *much* more editing, and the best thing I could say about the mom is that she is a martyr. Your assessment of her relationship status and the way she spirals toward her own loneliness is accurate. Best, and if you write back, I will aim to check in much sooner on!