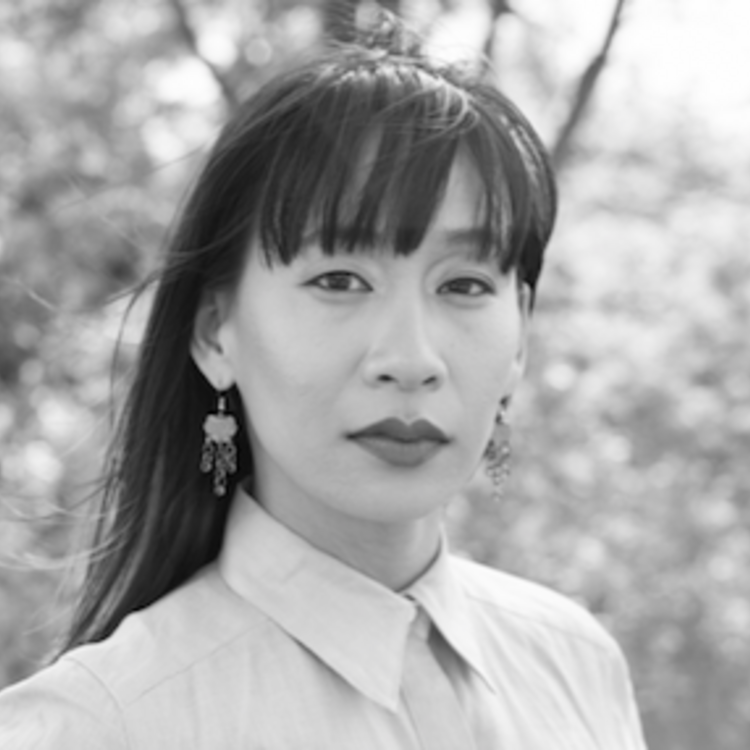 In 2014, I devised an interdisciplinary play for Brooklyn Museum about the early life of activist-artist Ai Weiwei with choreographer Jessica Chen, composer/violinist Jason Kao Hwang, beatmaker/video artist Adriel Luis, and slam poet Kit Yan. The show was presented by the education department’s Art Off the Wall series during Ai’s exhibition According to What?

In devised theatre, I see my creator-director role as one who poses questions, listens, answers, and repeats until the show forms itself. Of the process, Kit wrote:

As a performer who works in primarily slam poetry and musical theatre, the devised techniques we used were really outside of my comfort zone. At many times I didn’t know what was about to happen, what was happening, and why, but it felt really great to trust in the process of a creative director who didn’t necessarily have a desired outcome, but a vision for the journey.

I love when artists get to do something new with their craft and dig into fresh perspectives. Regarding this creative stretch, Jessica reflected, “It was amazing to be pushed to explore a new form of artistic expression. I cannot emphasize enough how much dancers hate to speak on stage. Of course I got nervous, but really the whole time I felt so at ease. I felt so safe to explore.”

Understand that the rehearsal practices of music, dance, and spoken word cultures vary greatly. For jazz in NYC, we often work within one or two rehearsals. The Seed rehearsal schedule spanned weeks. I recognize and value how this duration allowed for the full engagement of each collaborator’s imagination, essential for an interdisciplinary collaboration.

The process began with one-on-on conversations gauging each creator’s work, trajectory, and hopes for growth. We chatted about experiences topical to the show like Adriel’s curatorial knowledge of Beijing art; Kit growing up in a pro-Communist household; Jessica’s sensitivity to the 1980’s NYC AIDS crisis given its impact on the dance community; and Jason’s involvement in NYC Asian American activist art groups in the 1980’s and 1990’s. We discussed logistics and established Google Drive as our collaboration hub to share reference materials, writings, videos, sounds, and images.

Before our first rehearsal, I read over 200 pages of Ai’s blogs and interviews, extracted quotes about his early life, and labeled them by topic. Jason noted: “The early rehearsals were really workshops where we learned about each other and Ai Weiwei. The open ‘canvas’ gave each collaborator in their unique disciplines, a free path forward and into the work.”

In one early rehearsal, we had a table, a lamp, a chair, and a cup inspired by an Ai quote that identified these things as the only items necessary to create a sense of place. With a video camera recording, we spread hundreds of text research quotes on the floor. We walked the room and read quotes aloud. We re-organized the quotes on the floor based on their “emotional heat.” We ended rehearsal with a twenty-minute improvisation, free to use anything in the room, interact with each other, and vocalize quotes in any way that felt right.

Each creator was asked to write ten minute free-writes about the Cultural Revolution, being a NYC artist, and activism in the age of social media. These free-writes established emotional entry points for each creator and generated content for the show.

The creators left with designated tasks and I organized the quotes chronologically into a rough script. Jessica pulled choreographic phrases from her repertoire to illustrate voice and democracy. Kit studied Ai’s physicality and the poetry of Ai Qing, Ai Weiwei’s father. Adriel compiled an iPad sound effects bank to re-create Ai’s exterior world. Jason explored Ai’s interior world through violin improvisations using analog delay and octave pedals: “Sounds, ideas and concepts were set to script, but not notation. I listened to the inflection, tempo and timbre of each voice and movement, which pulled truly new music from me.”

Each creator was asked to write ten minute free-writes about the Cultural Revolution, being a NYC artist, and activism in the age of social media. These free-writes established emotional entry points for each creator and generated content for the show. We did a movement exploration of the stage and audience spaces at Brooklyn Museum. Adriel shared physical ideas from Ai’s artwork, which we incorporated into our improvisations. We read our free-writes and discussed identity, creativity, and freedom. We generated a rich collection of music, movement, and text phrases. When the path forward wasn’t clear, we discussed what we wanted to create, hoped to give our audience, and the points where our politics converged and diverged.

Using a technique from dance company Urban Bush Women, we organized our phrases onto color coded cards. Each card held one idea, and colors denoted idea categories (movement, sound, visual, interactive). Kit and I arranged the card order, identifying where to combine phrases and link them with the rough script.

'The most incredible outcome was truly being in conversation with a community of Asian American artists that cared deeply about the power of art and the beauty in art.'—Kit Yan

The show had its heart, yet it lacked connective tissue. To solve this, Kit wrote poems imitating Ai Qing’s style, using content from our free-writes, to provide powerful transitions between each act. Kit shared: “I [hadn’t] previously written work for the stage inspired by found and historical texts or other people’s blogs. The feeling of writing so many persona pieces was really amazing and gave me an opportunity to find something universal in many people’s stories.”

Adriel and I worked on the video component of the show with the desire to invoke setting and provide visual examples of Ai’s work and his influences. We also used creator free-writes as a foundation for video interviews that became the introductions for each act in the show. As our process developed, Jason wrote: “Because of the foundation of the early workshops, our collective sense of what worked and what didn’t work, was quite unified. Each rehearsal produced more and more clarity and very quickly, our momentum surged to create the whole.”

Each creator received a different take-away from the overall process. Kit felt: “The most incredible outcome was truly being in conversation with a community of Asian American artists that cared deeply about the power of art and the beauty in art.”

The show affirmed Jason’s belief in our eclectic path: “[It’s] a fascinating and unique theatrical work. It was like a staged, multi-dimensional documentary film with interviews and blogs of the subject, intercut with video, dance, music and poetry. [Our] democratic process produced the best of collaborations.”

For Adriel and Jessica, the show sparked new directions in their existing work. Adriel wrote: “Since The Seed, I’ve begun a new excitement in exploring art in Asia. I’ve become familiar with more transnational Asian artists, those who broke past borders or didn’t see them in the first place.”

Jessica shared: “One of the many things I take away is the idea of a free-write. The free-write is an amazing process, because you get to drop into that space for a limited amount of time and just write.”

I was most proud that the show was exciting and accessible to those who knew a great deal about Ai, and those who knew very little at all. Our organic process allowed us to place his story in the context of our own, creating an immediate connection. The devised theatre process personalized the theatrical experience, drawing from our unique experiences to transform ourselves and our audience.