I was born female. By middle school I realized I was being treated differently than the other young women. My tormentors called me an animal, an "it," a disgusting thing that couldn't have possibly come from my mother's womb. I had no gender at all. The bullying intensified after I cut out all my processed hair. One day my younger sibling informed me that his friends were saying, "Your brother wears tight pants.” Evidently, my short hair marked me as masculine, but the "tight pants" on my generous figure feminized—and therefore muddied—my gender. I could handle being read as a boy. At least that meant I was human.

I did theater in high school and undergrad. At first my college roles reflected back everything I hated about my gender—in one play I was a rape victim. During rehearsal the director asked me to lie back on a table and instructed one of the male actors to hold me down with one hand on my chest. When the director instructed me to struggle, I was supposed to be acting. My cast mate didn't use full force, but I could not escape. My stillness, silence, and surrender in that moment was assured. The stage direction rubbed up uncomfortably against my very real experience of sexual violence. I had scarcely felt more like a girl.

The same director cast me in for colored girls who have considered suicide/when the rainbow is enuf as lady in red. I immediately accused him of typecasting me. He asked me if I'd read the script all the way through. I remember the way my mouth fell open when I read to the end. My final monologue was a fight between a couple in which "there waz no air." I played crystal and beau willie simultaneously. I felt a force pass through me on certain lines. The guttural, wildly elongated "shit" beau willie let fly while he described his desire to marry crystal and her demand "what you gonna give/a broken jaw/niggah get out of here” haunt me today. I fulfilled my role so completely a male audience member approached me after a show and admitted that I scared him. Inhabiting beau willie’s mind scared me, too.

After graduate school, I gravitated towards performance art. Many questions emerged from my practice. What am I on fire to do? What gender(s) can I explore? Where is the niche for performers like me? How do I engage my entire history? Do I pursue opportunities that call for a specific gender(s)? Who is my audience? How do I market myself effectively? Will my intentions and choices determine how I am read or is that something outside my control?

I have many passions in performance. One intersection that feels urgent to me is the intersection of fatness and gender. I favor androgyny, but my body type is too fat to match the body type most people think of when they think of someone who embodies an androgynous look—a blank slate upon which almost anything may be projected. Allie Shyer has written on the tendency of fatness as a characteristic that "flattens gender expression." Shyer declares, "Every day I struggle to present my fat queer body in a way that is intentional and binary-defiant. Sometimes this means I don't get what I want, Sometimes this means I am misunderstood, sometimes this means I am put into situations that make me feel uncomfortable and challenged.” I feel similarly about presenting my fat, queer body in my performance work. My frame carries large titties, hips, ass, and thighs. If I want audiences to set aside the assumptions that often flow from that, I have to work harder as a performer. And sometimes I fail.

I entered EMERGENYC, a program of NYU's Hemispheric Institute of Performance and Politics that allows emerging artists to develop performance, shortly after I changed my name. Each of us had five minutes to craft a final performance. I secured three collaborators from my cohort. We rehearsed a few times. I kicked a couple ideas and received their fears and concerns regarding how the audience would read their relationships to privilege. Following additional dialogue I was able to encourage them to take certain risks—like standing on my back—with me.  I wore a binder and underwear. The too-small binder didn't compress much of anything. A friend pointed out that trying to bind past a certain cup size is akin to "hiding a loaf of bread under your shirt." Another more successful act of concealment entailed burying my black lacy underwear, which represented my ambivalence about my femininity, under some objects. The male collaborator then cleansed me and we did a warrior dance.

I enrolled in the Brown Girls Burlesque Broad Squad Institute to explore sexuality and disability. Here, too, students were called upon to create a night of performance. Other people had opinions about my process and how it reflected on my gender. Someone informed me, "Not to be rude...but guys don't wear garter belts—women do." I personally have encountered the expectation that my gender identity and my gender expression should "match," as well as the tendency for people to use my gender expression as shorthand for what I rightly should want or not want to explore or for my sexual attractions. I can see why people tried to draw a dotted line from my art form and specific performance choices to my gender and sexual orientation. I received a comment to the effect of "You've been doing burlesque and painting your toes, but you need to make a decision because two masculine presenting people don't go together." It made me mad and I became determined to portray my brand of sexy in all its messy glory. I set my routine to the Deftones' "Change (In the House of Flies)” because it evoked transformation for me. I had several liberating moments in the performance. I fondled myself with a hammer and simulated masturbation, licking my fingers brazenly in front of the audience. 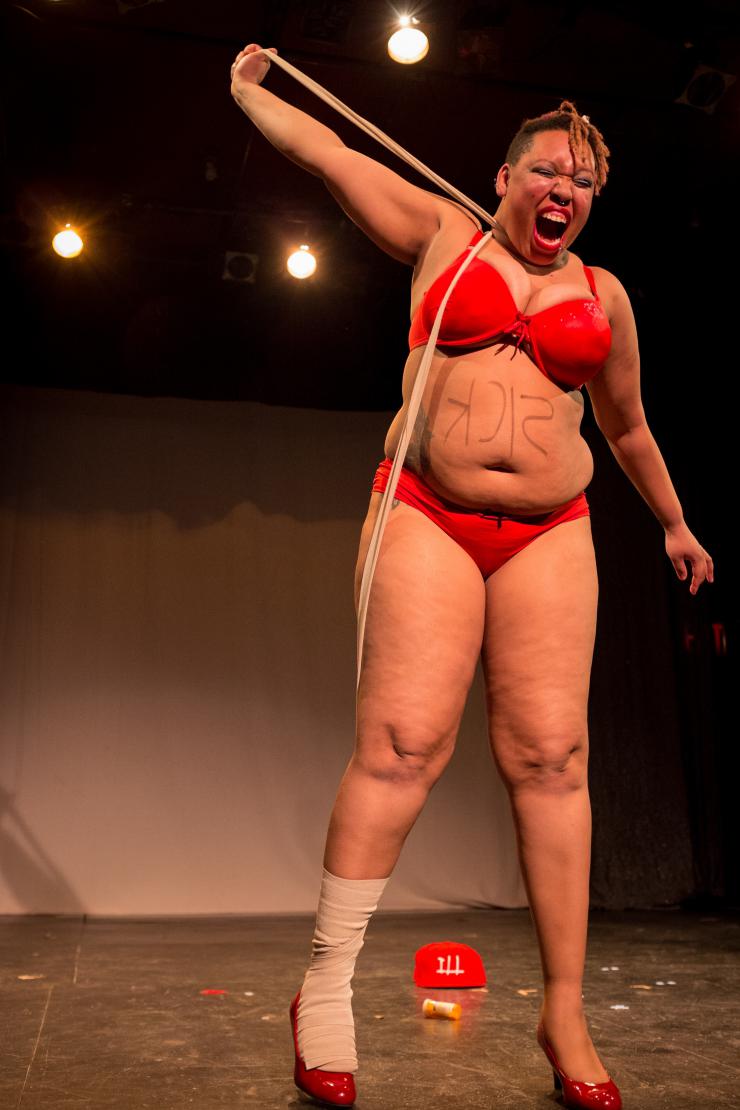 I worry about things in performance that I worry over in life. How do I relate to my body? I want to reach for the "intentional and binary-defiant" expression. Yet how do I make my expression more than the things I put on and take off my body? How do others relate to my body? As a performer, I want to expand the existing body of work on gender variance. I want my mentors and conspirators to show themselves. I want to help grow a movement to change performance culture so that nobody's body is left behind and everybody's contribution is valued.

An Interview with Kolmel WithLove

The News creates a space for queer performances to be put on a stage. Each ten minute time slot allows artists a place to experiment, explore new work, and start their conversation.