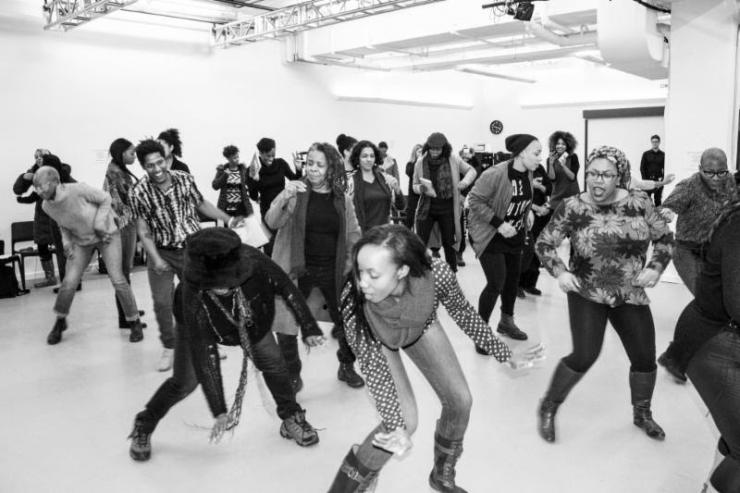 Conceived by choreographer Camille A. Brown in 2014, The Gathering serves as an open forum for intergenerational black female artists to support one another and to advocate for greater cultural equity and acknowledgement in the contemporary dance world. As trendsetters and pioneers who merit more widespread public recognition for their innovations, this evolving group of black choreographers meets annually to examine the reasons for this precedent and to embark on a mission to make their work more broadly accessible and appreciated.

The Gathering 2018 thanks its generous sponsors & partners: The Howard Gilman Foundation, Engaging Dance Audiences*, Gibney Dance, The Field, and Dance/NYC.

*Engaging Dance Audiences is administered by Dance/USA and made possible with generous funding from the Doris Duke Charitable Foundation.

By Popular Demand...Guess Who's Back?

After the success of last year's Gathering, it is with great pleasure that we welcome back our co-facilitators for The Gathering and The Gathering workshops.

Ebony Noelle Golden is an artist and cultural strategist who unflinchingly believes in the power of creativity to inspire, instigate, and incite acts of collective and self-determined emancipation. Golden stages site-specific rituals + live art productions that profoundly explore the complexities of freedom in the time of now.  She serves as the founding CEO and principal strategist at Betty's Daughter Arts Collaborative, LLC  artistic director of Body Ecology Womanist Performance Project.

Golden is currently an Artist-in-Residence at the Hemispheric Institute of Performance and Politics where she is deepening her research on creative emancipation and public performance.  Ebony's current performance project, 125th & Freedom.  Slated for a 2019 world premiere, 125th & Freedom is a processional, protest, parade comprised of ten choreopoetic rituals staged along 125th Street between the Harlem and Hudson Rivers.  The project amplifies tools and strategies for resistance and resilience that can withstand systemic oppression in a world that values "profit over people".  www.bettysdaughterarts.com

Sydnie L. Mosley is an artist-activist and educator who produces experiential dance works with her all-women company SLMDances. Through her choreographic work, the company works in communities to organize for gender and racial justice. Her evening length dances The Window Sex Project and BodyBusiness address sexual harassment in public spaces and the economics of NYC dance, respectively.

In February 2017, Sydnie was recognized by NYC Mayor Bill de Blasio and First Lady Chirlane McCray for using her talents in dance to fuel social change.Sydnie is a part of the 2017 Bessie Award winning cast of the skeleton architecture, the future of our worlds, curated by Eva Yaa Asantewaa. Other recognitions include: LMCC Creative Engagement Grant, The Field Leadership Fund, CUNY Dance Initiative, Dancing While Black Artist Fellowship, and The Performance Project @ University Settlement, Create Change Fellowship with The Laundromat Project, the Gibney Dance Institute for Community Action Training, and the inaugural Barnard Center for Research on Women Alumnae Fellow.

She earned her MFA in Dance Choreography from the University of Iowa, and earned her BA in Dance and Africana Studies from Barnard College at Columbia University. Sydnie danced with Christal Brown's INSPIRIT (2010-2013) and continues to appear as a guest artist for Brooklyn Ballet. An advocate for the field, Sydnie sits on the Advisory Committee to Dance/NYC. www.sydnielmosley.com

Deputy Director, Programs and Services at The Field

Shawn René Graham is a freelance writer and dramaturg from San Jose, California who has worked with many writers including, Dennis Allen, France-Luce Benson, Nilo Cruz, Steve Harper, Walter Mosley, Lynn Nottage, Paul Rudnick, Susan Sontag, Dominic A. Taylor, Judy Tate, and Cori Thomas. She has been a guest dramaturg at the O'Neill Playwrights Conference, the Crossroads Theatre Company's Genesis Festival, the New Professional Theatre, and African American Women's New Play Festival and on many panels including, National Endowments for the Arts/Theatre Communications Group Theatre Residency Program for Playwrights, the Massachusetts Cultural Council, Artist Grants Panel in Playwriting and the Mark Taper Forum's New Works Festival and is currently the resident dramaturg of The American Slavery Project's Unheard Voices.

She is the Literary Director for the Classical Theatre of Harlem's Future Classics Series and Playwrights' Playground, and founder of All Creative Writes, an artistic assistance service designed to provide individual artists and performing arts organizations with administrative, fundraising and writing support. Ms. Graham holds degrees from the California State University, Los Angeles and the American Repertory Theatre Institute for Advanced Theatre Training at Harvard University. She joined The Field in 2012 and lives in Bronx, NY.