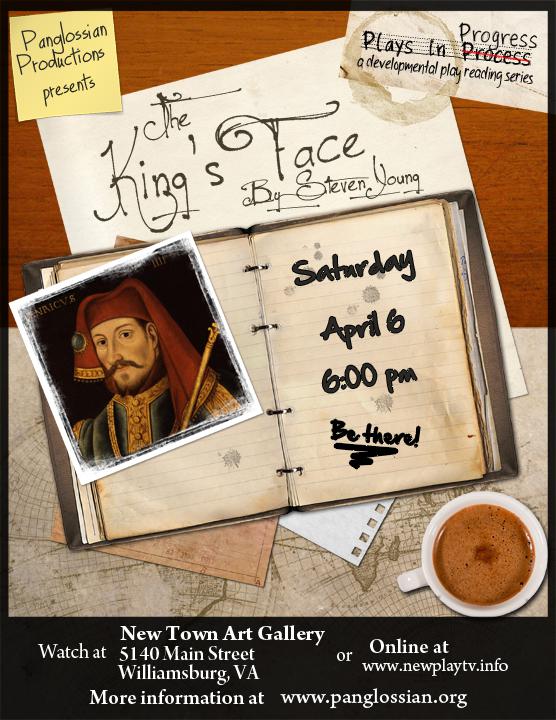 The King’s Face is loosely based on the true story of Prince Harry of Monmouth, the future King Henry V. At the Battle of Shrewsbury, the young Prince is wounded when he is struck by an arrow, the head of which becomes embedded in his skull. The best and brightest men of medicine are summoned to save the Prince’s life, but none are able to devise a way to safely remove the arrowhead. As a last resort, imprisoned surgeon Jonathan Bradmore is summoned to attend to the Prince. Fighting the constraints of archaic medical practices and having to pierce the defensive shell built by the terrified youth, the two, over the course of several days, develop a father and son relationship, examining questions of sex, religion, terrorism, war, patriotism, and what it means to lead a nation.

Steven Young's (playwright) The King’s Face was a 2013 Southwest Play Competition co-winner at Stage West in Fort Worth, Texas. At Broken Gears Project Theatre in Dallas, Young created the adaptation for the production of Strindberg’s Creditors and both directed and adapted Oedipus the King. His play The Night We Bombed Lincoln Towing was a finalist for the 2012 Method and Madness Playwriting Festival. The Wal*Mart-ians, originally produced in Chicago, was a Jerome Fellowship Finalist and was hailed by Chicago Arts and Entertainment as the Best Comedy of 2002. Steve’s play Boiling Frog was twice produced at Chicago’s Side Project Theatre. Steve was a contributing writer to Longing with Language at the 2011 Philadelphia Fringe. His script The Resurrectionists was originally performed at The Virginia Stage Company and then produced in Chicago; the windy city production was nominated for two Joseph Jefferson Citations. Cheddar Heads was a Prop Thtr National New Plays finalist in conjunction with the National New Plays Network; it received productions at the Theatre Building-Chicago and the Milwaukee School of the Arts. Young will be appearing, this month, in the one-man-show The Agony and the Ecstasy of Steve Jobs at Amphibian Stage Productions in Fort Worth. He is also directing his adaptation of The Cherry Orchard at Texas Woman’s University where he is an assistant professor of drama. Young has a certificate in novel writing from City University of London and his working novel The Anatomist was selected in the top 40 out of 2,000 entrants for the BBC show Novel Pitch.

Shelby-Allison Hibbs on Kitchen Dog Theater’s productions of Steve Yockey’s Blackberry Winter and The Thrush and the Woodpecker.