Recommended
Devising Our Future
HowlRound Theatre Commons
Most Discussed
Naming the Trope: A Deep Dive into the Harmful Uses of Disability Stereotypes in the American Theatre
Ben Raanan
Most Watched
A Conversation About the Making of Addressless
Tuesday 11 January 2022
Upcoming
Livestreaming a Convening: The Ellen Van Volkenburg Puppetry Symposium
Saturday 22 and Saturday 29 January 2022
Essay by
Tamás
Jászay
Independent Theatre in Hungary and the Czech Republic

Independence at a Cost

This is one of three posts exploring the state of independent theatre in Hungary and the Czech Republic.

“But why are they called independents when they receive money from the state so that they can perform shows in which they criticize the government?” A foreigner trying to understand independent theatre in Hungary might eventually reach this sort of conclusion. This proposition—just like other simplifying arguments—is in some respects true.

If I had to characterize contemporary cultural life in Hungary with one word, it would surely be division. In this small central European country with a population of less than ten million, life is rife with lack of understanding, lack of tolerance, and a persistent impatience that has become a part of our everyday lives. The campaign against independent theatre companies led by the right-wing government has lasted for half a decade now. Though this issue seems to be a local concern, it reflects the general situation and the mental condition of the whole country.

Independent theatre, in this context, might be a misleading term for those who are not familiar with the Central-European—or, more precisely, the Hungarian—anomalies of the system of cultural subsidies. In the 1960s and 70s, there were alternative and underground theatre companies that positioned themselves in contradiction to the official cultural politics. They did not fit into the financing system—constructed after World War II and modeled after the Soviet system—which gave preference to permanent ensembles and repertory theatres. In amateur theatre groups and university drama circles, still, emblematic figures could establish their careers. Take, for example, András Jeles and Tamás Fodor (who are still active), or Péter Halász who, after his inevitable emigration, founded the world famous Squat Theatre in New York.

In the 1980s, when the communist regime started to soften, there was less point in being against the party-state. Moreover, television became a popular pastime, and alternative theatre performances lost audiences. They needed financial support, so from 1984 on, the Soros Foundation, and from 1993 on, the National Cultural Fund of Hungary, helped to finance the production of independent theatre. Since the 1990s, the Hungarian Ministry of Culture (which always changes its name when a new government comes to power) has been issuing calls for applications from theatres and ensembles who must apply for subsidy each year. We call these groups “independent theatres.”

Independence for these theatres, therefore, is an illusion. Independent theatre and dance companies are defenseless against the changing composition of ministry boards and the decreasing budget.

The requirements for these applications get more and more rigorous, while the amount of money theatres can apply for is decreasing. Since 2010, when the right wing government came to power, the list of curators proposed by the federation of the independent theatres has been ignored, and several recommendations for funding made by the deciding juries have been ignored due to political pressure. In the meantime, private patronage of the arts has not developed in Hungary. It would have been less painful to direct independent theatres—even through the government—to procure this form of subsidy. Some of the most successful artists took part in international co-productions or joined international performance networks and this was a temporary fix, but in the long run, these options will not save the whole structure. The greatest problem is that because of the annual competition for financial support, any long-term planning or cross-company collaboration becomes virtually impossible.

Independence for these theatres, therefore, is an illusion. Independent theatre and dance companies are defenseless against the changing composition of ministry boards and the decreasing budget. At the same time, many of the Hungarian independent companies are internationally known and celebrated, and receive invitations to international theatre festivals. Among them we find Béla Pintér, who reflects on Hungarian social life with grim and coarse humor, Kornél Mundruczó, who stages images of physical and mental aggression in monumental international productions, and Csaba Horváth, who began his career as a folk dancer, but has in ensuing years, created his own complex stage language. Additionally, I have to mention Árpád Schilling, the leader of Krétakör (Chalk Circle) and Viktor Bodó, the director of Sputnik Shipping Company (Szputnyik Hajózási Társaság). The careers of these two artists took a new direction in 2015—I will touch on that later. All of these directors represent a distinct artistic aesthetic and expression and are respected both in Hungary and abroad. 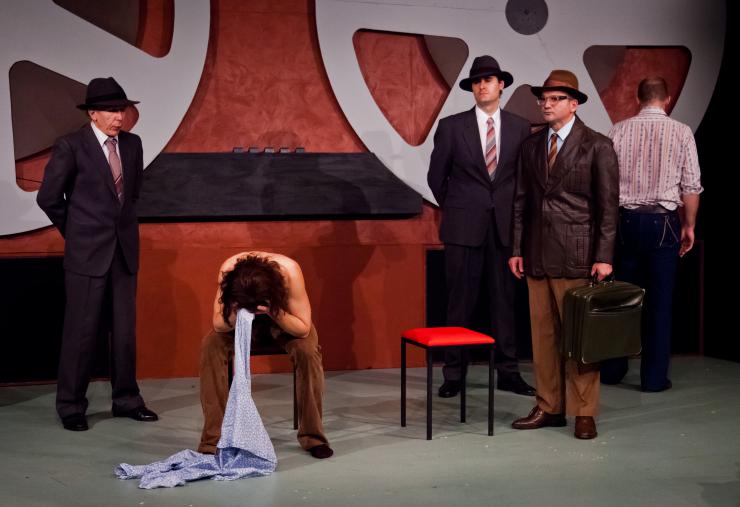 Sometimes it seems that these representatives of Hungarian theatre are more successful abroad than in their home country. Due to the lack of state support, these companies—which, directly or more symbolically, always reflect on the state’s centralizing cultural policy—cannot succeed. As Kornél Mundruczó, who finances his theatrical projects only by international co-productions, points out, his company, Proton Theatre, is only a “theoretical concept,” because they have not received any state support for years. The only institution they can rely on is Trafó - House of Contemporary Arts, which can help support them financially.  If anyone wants to attend a Béla Pintér show, for example, they must go on a six-month waiting list because the Szkéné Theatre houses 130 seats, and there are simply not enough performances to meet the audience demand.

In 2015, there was a significant change in the working of two important companies on the independent theatre scene. In recent years, Krétakör suffered indirect, but regular, political attacks. One of the government officials, for instance, claimed in public that Schilling had lost his talent. However, it was a more severe attack that the ministry grant awarded to Krétakör was, without an explanation, subsequently halved. Schilling reacted with a video performance: standing in front of the building of the ministry, he tore the letter into pieces and stated that he would never apply for a state grant again. Krétakör’s role has been pivotal, since they were exemplary in safeguarding the interests of theatre professionals, taking part in political actions in the public sphere and in the younger generations’ education around the practice of democracy. Hopefully, their work will not be terminated at this point; leveraging their international contacts to activate and expand their international network might help them survive.

However, working only in international productions might have serious consequences in the long run, as illustrated by the case of the Sputnik Shipping Company. This ensemble, due to the lack of eligible subsidy, was terminated in 2015. Although successful productions staged in German-speaking countries solved their financial problems for a short time, it was difficult to pay actors who were employed in full-time positions. Their latest shows, The Government Inspector and The Threepenny Opera, involved strong political and critical allusions in an entertaining form. Beside these two productions, they proposed a social and educational theatrical program (entitled Life Boat [Mentőcsónak]), which took on social issues such as poverty, segregation, and racism. These issues, unfortunately, do not fit neatly into the image of an economically successful country that the Hungarian state seeks to propagate.

A great number of theatre artists—especially within the younger generation—consciously avoid political theatre. I disagree with Béla Pintér who, in a public discussion, considered this cowardice. The situation is much more complex. This attitude is the result of everyday politics, which, by now, have weakened people’s innate resistance to the system, and as a result they have sought haven in their own, smaller communities.

The theatre company dollardaddy’s work, in new productions performed in Trafó, focuses on the issues of family life, individuality, and the erasure of the boundaries between audience and stage. They are experimenting with reinterpreting Scandinavian plays and adapting them to contemporary Hungarian reality. Stereo Akt (led by Martin Boross) also concentrates on the different levels of individuality. In one of their previous shows, Promenade: Fate Tourism (Promenád: Sorsturizmus), spectators sit on a bus and, observing the streets and squares, experience personal stories that transform traditionally public spaces. In another fascinating performance, Before You Die, the audience shares their bucket list of things they want to do before death with each other. It is an experimental play built on vision and free associations with very original dramaturgical tools.

Before You Die was selected into the competition program of POSZT (Pécs National Theatre Festival) this year. The decision is surprising, because lately, independent theatres have not been invited (Béla Pintér’s company was last called in 2010). On the other hand, the festival, in recent years, has become ground for more open political debate and discussion. Some of the organizers, instead of focusing on a more balanced curation of the festival, have attuned to the interest of certain political sides.

The last development related to POSZT shows that these conflicts are deeply rooted. The organizers of the festival, as usual, invited the Hungarian Theatre Critics’ Association to elect one of their members into the jury. The candidate, Judit Csáki—one of the best-known theatre critics in Hungary—was, however, rejected without explanation. The decision resulted in a protest by theatre critics: a great number of theatre journals, magazines, and other representatives of the media and Hungarian culture declared that they will not report on the events of POSZT, which is the largest theatre festival in Hungary. The demonstration is not against the artists, but in defense of theatre criticism, which must be free of actual politics. Theatre critics who take part in this protest (including myself) strongly believe that mutual solidarity is of the utmost importance, no matter if we are in the independent theatre scene or not.

Czech Republic
HowlRound TV Infrastructure Project in Central and Eastern Europe
Hungary
Most Discussed
Naming the Trope: A Deep Dive into the Harmful Uses of Disability Stereotypes in the American Theatre
Ben Raanan
Most Watched
A Conversation About the Making of Addressless
Tuesday 11 January 2022
Upcoming
Livestreaming a Convening: The Ellen Van Volkenburg Puppetry Symposium
Saturday 22 and Saturday 29 January 2022