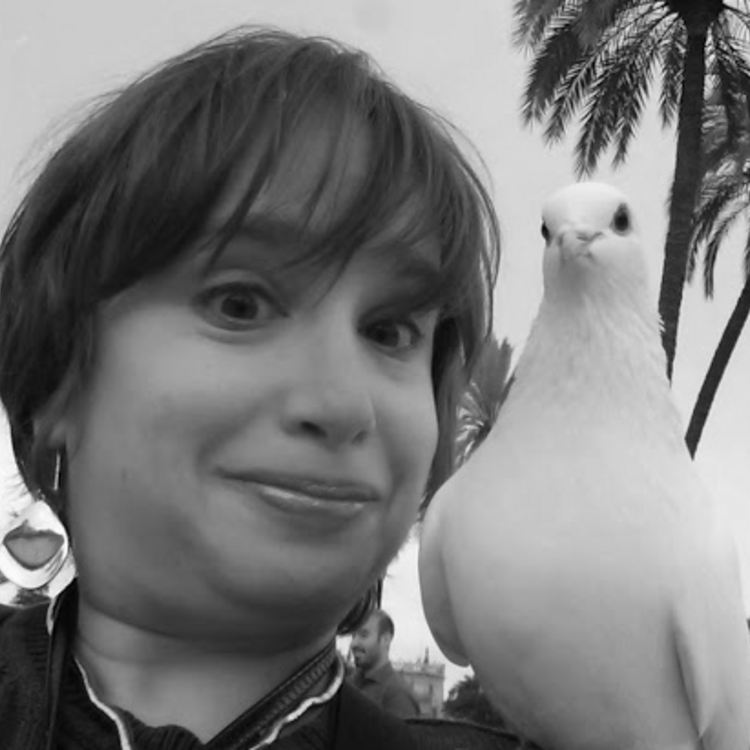 Jennifer Ashley Tepper; or, The Evolution of a Theatre Historian (and all that followed)

While there are many industry professionals who celebrate the history of theatre, few cover as many media as Jennifer Ashley Tepper does. Through both the printed word and by organizing live performances, Tepper is bringing Broadway history to new audiences every day.

Growing up in Florida, 1,239 miles away from Times Square, Tepper was forced to study Broadway from afar. “That was what made me seek out cast recordings, liner notes, books about theatre, theatre on television, regional productions, etc,” she said. “And learning about theatre in this way made me have more of a ‘historian brain’ than I might have otherwise. I was fascinated by what was going on in the present, but also by learning about all that had happened in the past.”

I have always been obsessed with the Broadway theatres themselves, because they are such a specific and exciting element in everything that happens.

At This Theatre...
As she came to appreciate the history of Broadway, Tepper began to appreciate the vital role each theatre played in the genesis of each show. “I have always been obsessed with the Broadway theatres themselves, because they are such a specific and exciting element in everything that happens,” she said.

While working on [title of show] at the Lyceum in 2008, Tepper learned about the theatre’s history and what made the venue unique. Reading the “At This Theatre” section in Playbills also fueled her interest in sharing not just the history of Broadway as a theatre district, but of celebrating each house and the shows that ran there. “No Broadway show could happen without the theatre, and yet often people don't know about each individual one—how fascinating they each are, and how much they contribute to a show's journey.”

In 2013, Tepper landed a book deal with Dress Circle Publishing to publish a theatre-by-theatre history, filled with first-person narratives from the people who worked in each house in any possible capacity—from the stars in the spotlight to the ushers, crew members, and doormen. Focusing on eight theatres per volume, The Untold Stories of Broadway would celebrate the people who made Broadway history happen, and would focus on the tales that were not commonly known within the theatre community.

With a deadline in place, Tepper started reaching out to everyone she knew, collecting stories and getting suggestions for other possible sources. Ultimately, she interviewed an estimated 200 people in order to put together the first volume of The Untold Stories of Broadway, and for each subsequent volume, she has added about twenty-five or thirty new interviews to that collection. As more people expressed interest, Tepper conducted as many as four interviews in a day, racing all over the city to collect stories, and then organizing them into a cohesive whole.

The first volume of the series was the most challenging as far as “just logistically making it happen,” Tepper said, but the second and third volumes had the most significant challenges as far as telling the best stories in the most representative way. “I started out wanting each theatre's chapter to contain as wide a range of shows as possible, to represent as wide a range of time as possible chronologically, and as many different theatrical professions as possible, etc…and as the process continued, my goals shifted to involve inclusivity of gender and race, too.” 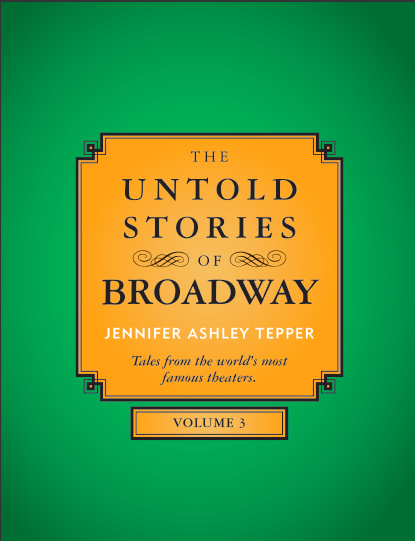 Live History
As the Director of Programming at Feinstein’s/54 Below, Tepper is responsible for bringing in the talent to the venue’s stage. Under her authority, the cabaret space has hosted reunion concerts of several musicals as well as several editions of Tepper’s If It Only Even Runs a Minute series, celebrating “forgotten” musicals of Broadway. “It's been amazing to be able to channel my love of musical theatre history into live events,” she said. “One of my main goals at 54 Below has been to give underappreciated musicals of the past a place to come back to life and be celebrated so it's been wonderful to be able to continue to do that through If It Only Even Runs a Minute and also through full concert versions of worthwhile short-lived shows from the past.”

Tepper has organized concerts celebrating Taboo, Smile, The Act, and Bright Lights Big City, and in the spring, she will putting together the concert version of a Broadway musical that hasn't been performed at all since it closed more than forty years ago. “It's been really special to be able to honor shows from the history books that may not have gotten their due the first time around, but which still deserve to be remembered.”

In an average week, Tepper estimates that Feinstein’s/54 Below hosts sixteen concerts. “Essentially, at its core, my job is a combination of coming up with ideas and making them happen, and fielding ideas from others and figuring out how to best make those happen as well,” Tepper said. “The challenge of bringing original cast members back together is mainly in putting together a creative team and environment where those people feel comfortable to return—and encouraging them to craft the performance in a way that fans and newcomers will both understand and love.”

Past, Present & Future
So how have Tepper’s simultaneous roles as historian and producer influenced one another? “There are definitely people I've been able to program at 54 Below because I've interviewed them for the book, or had them previously in Runs A Minute, and it goes in every direction—there are absolutely people who have done Runs A Minute because we've done a great interview for Untold Stories,” she said. “Theatre is great in that way because if you love working with someone on something, there are returns to that in other projects if you are lucky. I wrote a lot about Rachael Lily Rosenbloom And Don't You Ever Forget It in Volume Three, which I first became more fascinated about because of Runs A Minute. And we certainly have done things like Cry Baby in concert because I loved focusing on it for a moment at Runs a Minute and wanted to expand on that.”

As a historian, Tepper has been surprised by how differently people can perceive shows, and how subjective art can be. “So many people involved with a show might not think about it as as special as I do,” she said. When she interviewed Barry Bostwick about Soon—“a show I've always been fascinated by,”—Tepper was surprised to learn that she knew more about the show than the actor did. She had similar experiences at If It Only Even Runs a Minute when Patrick Jude came to celebrate Got Tu Go Disco or Louis St Louis and Ilene Graff came to sing from Truckload. “There's a sense of ‘you've studied this so you know as much if not more as us, who were actually involved!’ Because in reality, these short-lived shows took up such a short period of time in people's lives, so we who obsess over them and wonder about them have almost spent more time, relatively, thinking about them than some of the participants did. That's been something surprising to learn along the way.”

Over the last few decades, Tepper believes that Broadway has found a new respect for its own history in some unexpected ways. “The mentorship in our community has grown stronger in recent years,” she said. “Just thinking about the ways that the Jonathan Larson and Ed Kleban awards and grants have helped theatre writers makes me cry. Those writers are helping great things that they would have loved to be written, because of how generous they and their families have been.”

The spirit of mentorship is not limited to financial programs, of course. “It’s wonderfully common for people like Bill Finn and Craig Carnelia and Michael John LaChiusa and Stephen Schwartz and Stephen Sondheim—working writers who are so respected—to spend significant amounts of time mentoring writers, seeing new shows, giving advice that could not be given by anyone but them,” Tepper noted.

If there’s any lesson from the shows she has studied, Tepper firmly believes that the key to success lies in ‘never copying the exact thing that a hit did,’ but by following a hit’s path and holding true to a creative vision.

The Lessons of History
If there’s any lesson from the shows she has studied, Tepper firmly believes that the key to success lies in “never copying the exact thing that a hit did,” but by following a hit’s path and holding true to a creative vision. “For example, Hamilton should not inspire other musicals containing rap about historic American figures,” she said. Instead, the Pulitzer-winner’s success should—“ideally”— inspire producers to take a risk on musicals incorporating unexpected musical genres that are authentic to other new writers in stories that need to be told for a reason in that other style. “This is something that is apparent if you look at any huge hit and the ‘trend’ that came after, whether it's Hair and the ‘tribal hippie rock musicals’ that came after like Via Galactica and Dude, or a jukebox show like Mamma Mia! and the jukebox shows that came afterward,” Tepper said. “The ones that are most successful find their own inspiration in a similar way, rather than copying the hit show and changing key elements to try to mimic their success.”

By delving into theatre history, Tepper has also gained new respect and understanding for everything that goes into making a musical today. “In spending so much time studying and speaking with people about theatre from the past—how it came to be, what it meant, the story from inception to closing night—I have gained so much insight into all of the challenges that make theatre so unique,” she said. “Every time I am involved with new shows, I bring all of that to the table. I know what the writer is going through in trying to create a new Act Two opener, what the ensemble is experiencing in dealing with tech rehearsals, how the lighting designer is being challenged in trying to adapt their design for a differently shaped theatre than the show's out-of-town tryout was in, what the producers have in mind for the creative changes based on reviews they've seen so far, etc.

“Basically, in studying every show of the past, you learn so much about what might make a show improve or be better understood, or make a team come together in a more successful way. But in the end, each show is really its own crazy machine, and that's what makes it special. I do think that people with great knowledge about theatre history are an asset when it comes to making the present productions the best they can be—and that's a thing I strive to be part of.”