My #metoo theatre story is from high school. Our theatre department consisted of five women and whatever hapless guys we could convince to come play a part so that we weren’t limited to just doing Steel Magnolias over and over. The women referred to our teacher as the Dirty Old Man, or D.O.M. for short. He did everything guys like that do—touched us for too long, stood too close, talked about our bodies, stared at our breasts. But we liked making theatre, so we put up with it. None of us even thought to tell an adult what was going on, but years later I did hear he was fired when a student more woke than we were went to the principal.

Thirty years later, the zeitgeist has shifted towards condemning sexist behavior, but some people—primarily women—in the theatre are still forced to navigate harassment and abuse, almost as a prerequisite for entry. What’s worse, they are finding that even when they use the resources available to them to speak out, their abusers are often let off the hook.

How many known harassers are currently working in the American theatre? How many institutions have covered up bad behavior even when it was clearly a problem? How many are still knowingly covering it up?

To date only five men from the American theatre have been felled by #metoo. After multiple complaints against him, Lee Trull had been slated to depart the Dallas Theater Center at the end of the 2017-18 season, an announcement couched in praise by Artistic Director Kevin Moriarty for his years of invaluable contributions. Upon being named by the website Theater Jones in December of 2017, Trull’s exit was accelerated, and the pretense that he was leaving for any other reason was dropped. Gregory Boyd of the Alley Theatre in Houston, Texas was pushed into retirement, taking a large severance with him even after the Houston Chronicle detailed the allegations of his bullying and abuse of women. When the New York Times reported that playwright Israel Horovitz had been abusing women for decades at various theatres, and the Seattle Times uncovered evidence that some of his employers were complicit, Horovitz was forced to leave Gloucester Stage Company in Massachusetts, and one of his enablers resigned from Harlequin Productions. When the Times asked Long Wharf Theatre for comment on allegations against Artistic Director Gordon Edelstein, they immediately put him on leave and terminated his contract the day after the article was published.

So that’s four abusers and one enabler. However, Diep Tran’s article in American Theatre magazine, “Unmuffling the Culture of Silence,” drew upon interviews with more than a hundred people with their own #metoo stories to tell. We don’t know how many of them named the same person, but I’m guessing the stories were about more than just the four aforementioned professionals.

Word on the street is that the New York Times also solicited stories, but as of yet they have not published anything, most likely because they haven’t been able to substantiate the claims well enough to avoid a lawsuit, but also possibly because they believe their audience to be fatigued by coverage of #metoo, or because anything short of Weinstein-level debauchery simply isn’t news. (I asked the Times for comment and was told, “We do not discuss what we may or may not publish in future editions.”)

Luckily, not everyone is held back by that concern. Theater Jones, founded and run by Mark Lowry, is a tiny operation compared to an institution like the New York Times. The investigative process that the authors of the article on Lee Trull went through took more than a year, and the events set into motion by their reporting are still unfolding. They don’t even have their own lawyers, but had to rely upon pro bono help from lawyer friends to advise them about how to avoid a libel suit.

Prior to their reporting on Trull, Theater Jones mostly published reviews and interviews, but as Lowry and writers Shelby-Allison Hibbs and Katy Lemieux learned more about what had been going on at the Dallas Theater Center for years, they committed to getting the information out. In an effort to create a business model more conducive to this kind of work in the future, Lowry is in the process of changing the site from relying on advertising to being a non-profit, which will allow for different kinds of fundraising.

In the absence of more reporting like Lowry’s, some people have taken the step of naming their abusers on Facebook. Playwright Monica Byrne has refused to be silent about her past harassers. She has also called upon TCG to publish the names they gathered in the course of researching “Unmuffling the Culture of Silence.” (Their response can be read here. Her powerful response to that response is here.) But individuals can be sued for defamation just as easily as institutions, and they are less likely to have lawyers and funding for a legal battle. 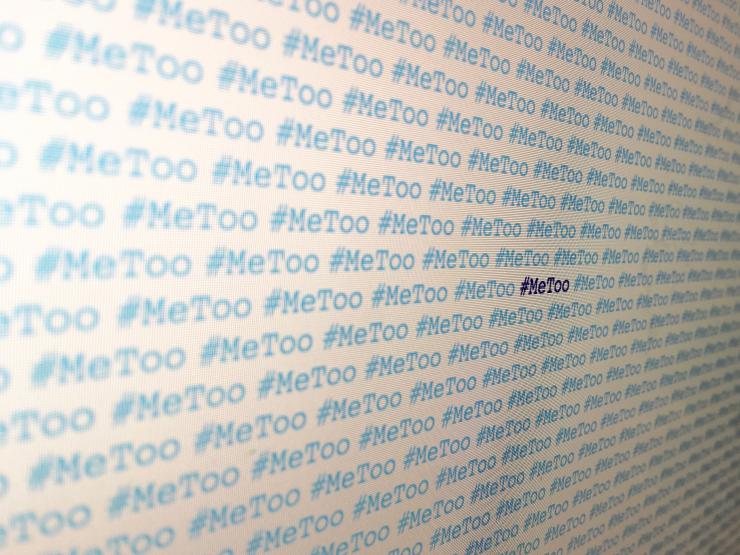 Naming names also has professional consequences for folks—especially women, who already face discrimination—in our field, especially when we do it without institutional backing. We are labeled troublemakers for speaking out, and our “activism,” which is really just an insistence on prioritizing our own safety, tends to become what we are known for more than our art. We shouldn’t have to choose between maintaining good professional relationships and not being abused, yet somehow even when we are believed, we are thereafter viewed as a problem.

And, as the stories mentioned above show, lodging a complaint, whether through the press or a Human Resources Department, is often an ineffective way to deal with the problem. Horovitz was first outed in 1993 by the Boston Phoenix, and was allowed to continue abusing people until 2017. Multiple complaints were made to human resources about Trull, but if not for the Theater Jones article, he would have left with a stellar reference. The Alley rewarding its most toxic abuser with a hefty payout serves as a reminder that institutions continue to value their mythic “male artistic geniuses” over their other employees. Many women are essentially asked to accept that harassment is just part of the job, and to content ourselves with warning others not to be alone with this guy, not to go to the bar with that one, and definitely not to accept a ride home from that one.

While #metoo has brought attention to resources such as Bravely, a third party human resources consultancy, the theatre business is a strange beast that few outside of its walls can successfully parse. More data on the scope of the problem is obviously needed. How many known harassers are currently working in the American theatre? How many people are currently in danger of being abused by them? How many institutions have covered up bad behavior even when it was clearly a problem? How many are still knowingly covering it up? How many people know what’s being done, where, and by whom and are simply refusing to act?

Moreover, whose responsibility is it to gather this information and share it? Unfortunately, telling #metoo stories is often traumatizing, and the more times the same stories are solicited, the less faith we have that anything will change. The New York Times may never run their article. TCG may never choose to devote their resources to investigative reporting of the scale that is needed, and they may never be willing to implicate their member institutions.

To prevent harassment and abuse, the powerful would have to fire—not retire—abusers, refuse to work with and recommend abusers, impose social as well as professional consequences on abusers, and publicly stand by victims.

Yes, we can keep up the whisper network, writing names on figurative bathroom walls for the next person to see in hopes that they can navigate the danger. We can go through Human Resources, or the stage manager, or a union—again—and see if it works this time. We can choose not to work at places known for their toxicity, if we can afford to turn down work. But all of these are simply ways of responding to harassment and abuse after it has already happened. None are preventative.

Prevention would require the active participation of the powerful, who would need to do more than tell the disempowered where to take their complaints. Imagine if Gloucester Stage had gotten rid of Israel Horovitz in 1993. Imagine if, instead of handing Gregory Boyd a massive check on the way out the door, the Alley had publicly apologized to the people he spent decades abusing. Imagine if, instead of quietly firing alleged abuser Raphael Martin, Soho Rep had publicly endorsed Monica Byrne’s choice to speak out. Imagine if, instead of simply releasing Lee Trull from his contract early, Dallas Theater Center had retracted the praise they issued just three months prior and stated unequivocally that none of his contributions were worth what he did to his victims. How many victim’s lives and careers would be changed? How many abusers would learn that they can no longer get away with what they do?

To prevent harassment and abuse, the powerful would have to fire—not retire—abusers, refuse to work with and recommend abusers, impose social as well as professional consequences on abusers, and publicly stand by victims. To prevent abuse, the powerful will have to tell one another who the abusers are just as often as survivors tell each other.

Thanks for this Holly. I would also add that Jeremy Menekseoglu, a playwright and artistic director for Dream Theatre Company in Chicago, was forced to shut down his company after numerous women revealed their heinous treatment from him.http://www.clydefitchreport...

And of course the reporting in the Chicago Reader and the work from Not In Our House that helped bring down Profiles.

And more of the same as reported by the Memphis Flyer about Jackie Nichols, founder of Playhouse on the Square. Thank you Holly for your story.

Thanks for sharing; I had missed that one. Thanks to the Memphis Flyer for reporting. Theaters need to hold these guys accountable publicly and let everyone know that such behavior will no longer be tolerated. Otherwise the message is that you can still get away with it. It will take a lot to change the culture at places like POTS, and so far it doesn't appear that leaders are interested in doing that work.

Further, we need to connect the ways this culture of complicity is reflected in the programming at American theatres. Plays that are overtly “feminist” are NOT welcome. Female playwrights are under-produced, and undersupported.

The negative economic impact on theatre artists either underemployed by abusers, or employed only if you stay silent and endure abuse is real. People suffering from PTSD (effecting more survivors of sexual abuse than soldiers annually) struggle to get and hold a job. Hostile workplaces harm productivity. Artists who’ve had their work ripped to shreds or character assailed by abusers struggle to regain the confidence to work in the theatre again. We lose great theatre talents when harassers are left unpunished, and responsibilty left unclaimed.

It costs us: financially, culturally, creatively.

Thanks, Holly. This is an important launching, and a recognition that much about the treatment of women in theatre needs to be looked at with new eyes.

Lydia Milman Schmidt, founder of the advocacy group Parents in Chicago Theatre, looks at the progressive policies Rivendell Theatre Ensemble has in place when it comes to working with parent artists on production.