Growing up on the west coast, the Humana Festival at Actors Theatre of Louisville always felt a million miles away. Somewhere beyond the horizon in the land of fried chicken and American horse racing was a hot bed of new work that drew audiences and theater practitioners from around the world. When I was told that I would be making my inaugural trip to Louisville for the festival I was filled with the kind of nervous excitement that only comes from the complete unknown. To preserve this sacred and blissful ignorance, I did very little preparation before going and just allowed myself to be thrown into it completely blind. 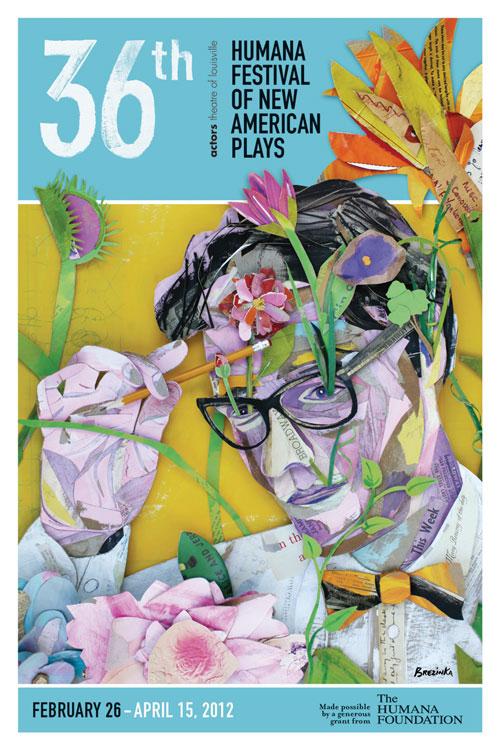 What an insane experience.

Three days, seven productions, one panel, and countless handshakes later I am certain that if I had known what I was getting into I would have had some kind of Diane-Keaton-character meltdown. Yet it all felt casual and pleasant as it happened. Don’t get me wrong, that amount of stimulation in that amount of time was completely draining, but in a strangely beautiful way.

Somehow while writing this reflection, the Humana in my mind became a kind of Woodstock new play love-in of lovely people and awesome productions. In a lot of ways that is true.

After getting off the plane, David Dower told us that the person picking us up from the airport would probably have a sign. Being picked up from the airport with a sign—check that off the bucket list. The excitement of the sign was quickly overshadowed by the first of many interactions with the exceptional team of people that make the Humana festival happen. It is so apparent that each individual staff member, apprentice, and volunteer supports and believes in the mission of the festival and is genuinely excited to be a part of it. The amount of activity in the weekend is awe inspiring to partake in, but must be herculean to produce. My dabbling in producing convenings this year definitely amplified my appreciation for how well the weekend was run; an event this size would be impossible without the team being of one mind.

An amazing and essential part of this mind is the group of apprentices at ATL. Not only did they perform their collection of food related scenes, Oh, Gastronomy!, they were also running the shows and served as crew for the constant change over of the three spaces. Each time I entered a space it was completely different than what I had seen before. In the case of the Bingham Theater, the group had to transform the space four times in three days. When they were not busy making the festival tick, they were as energetic and welcoming as the rest of the staff.

The organization and the people that flock to it share one focus point: new plays. Seeing so many fully realized productions felt like an answer to something. After so much conversation lately about submission policies, I couldn’t help but imagine what these plays would look like on the page. Could Lisa Kron’s customer service induced panic attack in her own Veri**on Play or the complex rhythms, beats, and rhymes of the human mix machine in Idris Goodwin’s How We Got On be properly communicated on the page? In fact, in the shuttle heading back to the airport, representatives from different theaters referenced scripts to see how these great theatrical moments were documented in text. It clearly was not the same. The festival is a carefully curated collection of new American plays for theater artists and audiences to wander through and enjoy. This is was my first time experiencing not only Humana but a festival of this size and it really made clear the importance of scouting new works.

Surprisingly, despite the amount of time spent sitting in a theater, it doesn’t feel like that was my entire weekend. There was a beautiful fluidity of people from various organizations that operate in various roles. This feeling was strengthened by the collegial bond formed from moving as a group from theater to theater. Every time the house lights went up there was a whole new aspect to add to continued conversations or inspire new ones. The lack of title or hierarchy leveled the playing field to people who could enjoy each other and celebrate their mutual love of theater.

Somehow while writing this reflection, the Humana in my mind became a kind of Woodstock new play love-in of lovely people and awesome productions. In a lot of ways that is true. I hope to go to many more where I will reignite with past connections and connect with more new play enthusiasts.

Happy for you, Kevin!

Dani Snyder-Young writes about the intentional diversity she witnessed in five of the 2014 Humana Festival productions.