Recommended
Devising Our Future
HowlRound Theatre Commons
Most Discussed
Designing Collaboration: In Search of a Taxonomy of Collaborative Methods
Emily McConnell
Most Watched
The Gathering from the CrossCurrents Festival
Wednesday 4 May to Saturday 7 May 2022
Upcoming
Livestreaming a Conversation: #DeafWoke with John Autry II
Friday 20 May 2022
Essay by
Garret Jon
Groenveld

Long Distance Affair, a PopUP Theatrics international collaboration between playwrights, directors, and actors worldwide, is a project conceived by Ana Margineanu, developed with Tamilla Woodard, and produced by Molly Morris. It is being presented at the 2013 Edinburgh Fringe. This is part two of a three-part series on the process behind making Long Distance Affair.

In February, I was delighted to take part in Long Distance Affair at the Gershwin Hotel. 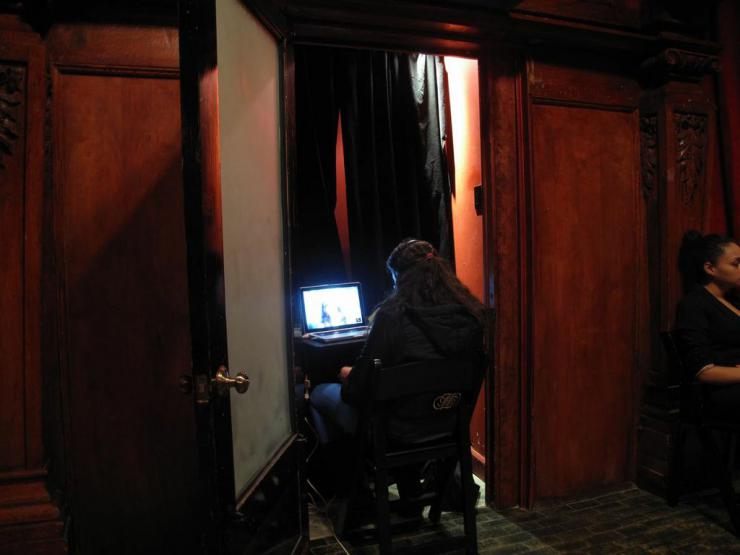 I was asked to participate by Ana Margineanu and Tamilla Woodward who I met through The Internationalists. The show was produced by their spin off company, PopUP Theatrics. The basic premise is that I was to collaborate with a director and an actor, each in different locations, to write a ten-minute piece. The piece, along with other teams’ pieces, would be watched at a computer via Skype.

The actor I collaborated with was the fantastic Eric Robertson, who lives in Edinburgh, Scotland. It was lovely to get to meet him via Skype. When we started, I had no idea what I was going to write. I was open to the process and hoped in our conversation would provide inspiration. Through the wonders of Skype, I got to meet Eric’s lovely wife and his young kids, to tour his home and see where he would perform. Through our conversation, I got a hint of an idea, and it was very helpful to have his voice in my ear.

As an audience member I’m often a bit uncomfortable if I’m required to participate too much—I feel like I don’t know my lines and that makes me anxious. My goal was to write a piece where the audience could participate to the extent they desired.

Though I was excited about the participatory nature of Long Distance Affair, I also recognized that as an audience member I’m often a bit uncomfortable if I’m required to participate too much—I feel like I don’t know my lines and that makes me anxious. My goal was to write a piece where the audience could participate to the extent they desired. I’ve seen a few different pieces and so far, each team has addressed this design challenge in their own way. 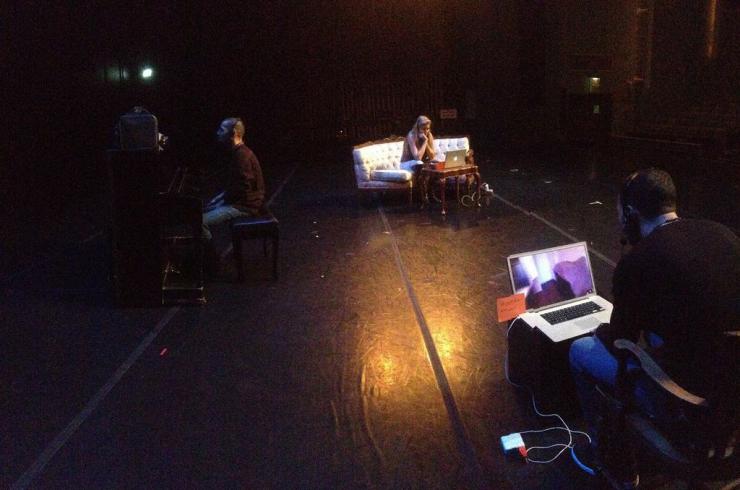 I wanted to try to play off of the international aspect of this project and ended up writing a hybrid spy-love story called Press the Button. The audience member was cast as one of Eric’s former partners in crime. I threw in a lot of locations, and played with a romantic backstory. I also used the reality that the show would take place in Eric’s apartment in the middle of the night to my advantage. Tamilla and Eric found innovative uses for the Skype camera—the piece was running short, so they ended up writing some of the text on Post-it's, which were then filmed in a particular way. This creative solution worked beautifully, and got the piece to the length it needed.

When the audience departed from Long Distance Affair, they were asked to write a postcard to one of the characters they interacted with. I was fascinated by the postcards the audience wrote to Eric—a few of them said, "I will push the button." For the most part, it just went to show that the audience had fallen in love with Eric.

When Tamilla asked me if they could remount Press the Button at the Edinburgh Fringe, of course I said yes. It quickly became clear that rewrites would be necessary. The original version was written for an audience in New York, in February. This time, Press the Button would be performed during the day, by an actor in audience’s same city.

I changed every New York location to a San Francisco location. The San Francisco locations are not world famous landmarks, just places I’ve had to go recently or in my neighborhood. I’m a firm believer in write what you know, with the idea that it being personal to me would make it personal for Eric’s character in the piece.

I was delighted to watch a recent rehearsal. The most interesting thing about the process is that the Skype camera acts like a proscenium. It’s not film, because it happens in the moment, and it changes with each audience member, however, we can frame the image the audience sees. And with the daylight, we can shift the light in the room, making it almost filmic. If it works out, we’re going to try to shift from a desktop to a tablet device, which would be able to change the view even more. I didn’t know where Eric’s house was located and he has a spectacular view, so hopefully we can take advantage of the flexibility of this technology and, when appropriate, let the audience witness the view.

Cross-cultural Exchange and Cultural Mobility
Digital Media and Technology
New Play Development
Playwriting
Process
Most Discussed
Designing Collaboration: In Search of a Taxonomy of Collaborative Methods
Emily McConnell
Most Watched
The Gathering from the CrossCurrents Festival
Wednesday 4 May to Saturday 7 May 2022
Upcoming
Livestreaming a Conversation: #DeafWoke with John Autry II
Friday 20 May 2022