If you ask any of my close friends, they’ll tell you that I’m averse to Shakespeare and have been for years. I've shot off my mouth about it often and at top volume. How are these supposedly canonical texts relevant to young people of color? And who decided that we should all have to read the work of this one old, dead, white guy, anyway? For many, many people, these are the only plays they're ever exposed to, and covered in their thick layer of figurative dust, they fail to entice. This is the introduction to theater that they get?

I’m willing to admit that my relationship to Shakespeare is, well, more complicated than I like to let on. I went to one of those high schools—you probably know the kind—they force their students to read Shakespeare every year without fail, usually with an associated trial to endure. My sophomore year of high school we were required to memorize and then write out an entire speech from Julius Caesar. But really...why? We might’ve known the words to Antony’s famous speech, but that didn’t mean that we made any use of them.

Growing up, I was that kid in class—the one who poked you with a pen while you gazed at the board, the one who reported to school dressed in full costume, the one covering the margins of notebooks with doodles and poems. In short, I was the weirdo—and the brainiac.

My behavior then (and, yes, sometimes now), my strange and restless nature, was part and parcel of my queerness. In middle school, my antics found an easy home in the drama club. At least there my tendency to put on characters could be put to good use, and I was accepted if not well understood.

As it is for many other people, middle school was a time of struggle for me, of strange new experiences and feelings of alienation, of knowing myself to be different, but trying to go along with the crowd. And just like millions of other pubescent youths, I watched Baz Luhrmann’s Romeo + Juliet when it came out in 1996 because it was the thing to do.

Imagine, if you will, a slumber party. A group of tweens huddles around a television in the carpeted family room of a two-story house. Most of them stare, mouths slightly open, entranced by leading man Leonardo DiCaprio. Caught up in his twenty-something good looks, they have found what they’re looking for.

But not all of them. Not me. I could appreciate Romeo’s brooding stares, but in truth I was secretly excited and frightened by Harold Perrineau’s Mercutio. The moment he appeared on screen, showing up to the Capulet ball in a platinum afro wig, silver bustier, miniskirt, and chunky heels, I felt a strange resonance. The disco beats of Kym Mazelle’s cover of “Young Hearts Run Free” bumping, I was enthralled by his ruby red lipstick, fabulous false lashes, and meticulously groomed facial hair. Back then, I didn't completely understand why, but this early glimpse of queerness was, for me, the only time Romeo and Juliet really hit home.

Fast-forward a bit to college. During my freshman year as an English major at the University of Texas at Austin, I was required to take at least one Shakespeare course, and I was absolutely dreading it. I was passionate about African American and Chicano literature. Craving discourse that resonated with me and reflected a bit of my experience in the world, I signed up for pretty much any course in the department that wasn't considered classical. But there was no getting around this requirement, so I decided to try Shakespeare at Winedale, by far the most enticing of my options.

In this course, taught by James “Doc” Ayres, we would stage a production of The Taming of the Shrew at Winedale Historical Center. After joining the class, all of us read the play and auditioned. Then we waited. Back then I was still living my life as a woman, and I was the only black person in my class. Which role would I be cast in? I already knew that my chances of being cast as either of the sisters, Kate or Bianca, were pretty slim. I was pretty, but I wasn't slight of build. And I was still black.

When the list was finally posted, I'd been cast as Baptista—the father of Kate and Bianca. I think Doc decided that it would be easy enough to change the pronouns in the play from he to she, and in so doing, he could find an appropriate place for me. 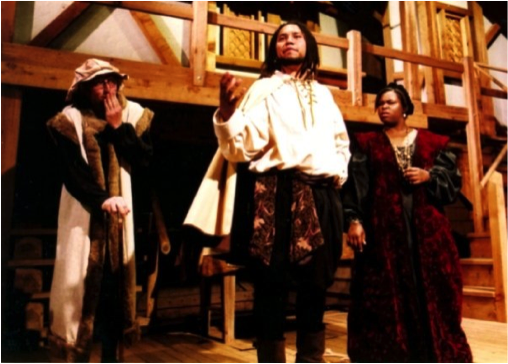 Caption: (Left to Right) Tom Whiteside as Grumio, Benjamin Rodriguez as Petruchio, and Azure D. Osborne-Lee as Baptista in The Taming of the Shrew.

In my Shakespearean debut, I experienced what would later in life become all too familiar as a gender nonconforming and transperson. Some of my classmates understood what was being asked of them—that they were to imagine me, someone they perceived as female, as the powerful leader of a family, someone who they originally imagined as male. Others couldn’t quite cope and tripped over pronouns up until right before we opened. They couldn’t let go of what they had originally understood to be true and imagine the world as somehow different, despite my standing large and in charge before them.

To this day I consider this production to have been one of the highlights of my acting career. I appreciated the chance to find myself placed just a little bit unconventionally in a space that I feared had no room for a person like me.

Years later, I moved away to New York City, but returned to Austin after receiving an offer I couldn’t refuse; Susan Gayle Todd cast me as the eponymous lead of her play Sycorax, an original prequel to The Tempest. Sycorax recounted the life of the allegedly malevolent witch who became the mother of Caliban. 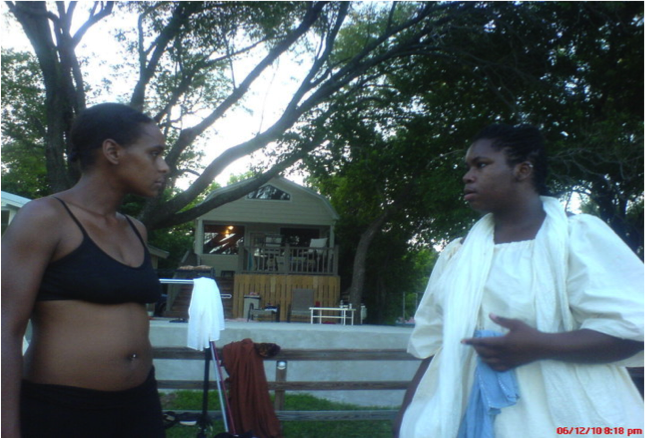 was the same one I realized that my gender wasn't binary. As I struggled with what this new understanding of myself would mean for my life, I also wrestled with embodying both Caliban and Sycorax, as the play called for. Sycorax was a whopping three acts long, bookended by both a prologue and an epilogue. I was on stage for almost the entire show and had a short time to memorize all my lines and blocking. It was a long, difficult summer for many reasons, but I closed the show secure in the knowledge that I had successfully embodied two dynamic characters in a single show, one male and one female, expressing, at least for a couple of hours at a time, recognizable gender fluidity. And that, I think, was just what I needed at the time.

And so this is why I’m willing to tell you that despite my knee-jerk aversion to William Shakespeare’s work, I believe that it has something to offer—an opportunity to inject something, an unexpected and vital new concept, and a place to create representation where there has been none. I believe that if people must—and it seems they must—continue to assign and produce Shakespeare’s plays over and over again, that space needs to be made for difference, however that different might manifest. Canonization, in my opinion, isn’t a fixed state. It’s got to include relevance.

I've never understood why they teach Shakespeare in high school with all the more relevant theatre in the world. And when a school does do a "contemporary" play it's some tired text that's over 50 years old, and I think that's mainly because more recent plays all contain adult language, and older plays don't. To top things off, most student's only exposure to theatre is in an English class, where the play is treated as literature and not something to be performed and brought to life. You end up with a bunch of kids who think theatre is dead and irrelevant to them.

Thank you for this beautiful share. I too, as a young person of color, wasn't having it for ole Billy boy back in my high school days. I am now, perhaps, his biggest ambassador and found tremendous resonance in your statement, "I believe that if people must—and it seems they must—continue to assign and produce Shakespeare’s plays over and over again, that space needs to be made for difference, however that different might manifest. Canonization, in my opinion, isn’t a fixed state. It’s got to include relevance."