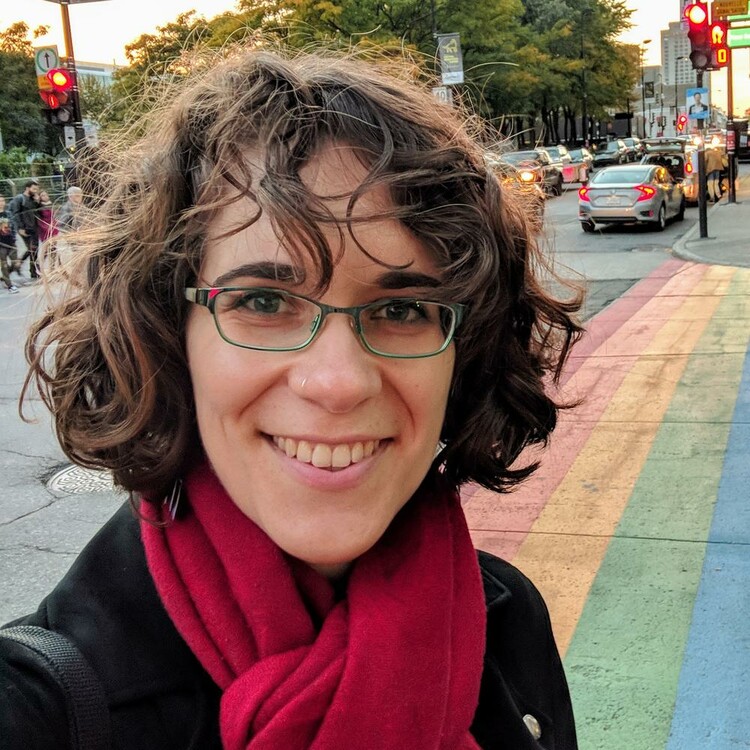 With the theatre industry’s recent interest in casting trans actors, Jenet Le Lacheur—a transfeminine Brit who earned recognition, before coming out, in the West End production of Harry Potter and the Cursed Child—has already performed in the two roles they’ve always wanted to star in. Even better: the roles were with directors capable and responsive enough to make the most of Le Lacheur’s talents and expertise as a genderqueer performer.

Before starring as Hamlet in Daniel Winder’s dystopian production of the Shakespeare play with Iris Theatre at St. Paul’s Church in London, Le Lacheur appeared as the Royal Shakespeare Company’s first known trans Juliet in Robin Norton-Hale’s Redefining Juliet, which then toured to the Barbican Theatre. While Redefining Juliet was an expressly remixed, remediated, and redefined show about Shakespeare’s tragic heroine, the fact that Winder’s Hamlet was nonbinary and transfeminine was largely subtextual—a subtle but important thread running through the production. 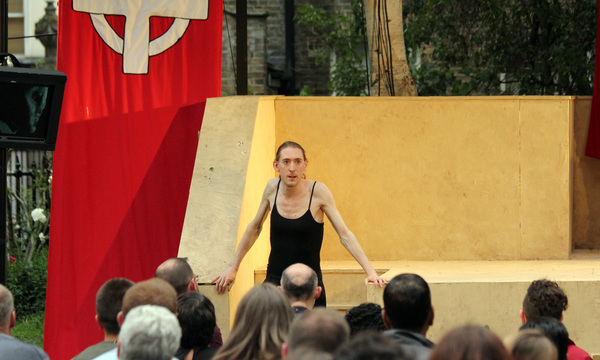 Going into the production—somehow my first time seeing Hamlet—I had no idea what to expect, other than that it would be a promenade performance through the gardens and sanctuary of St. Paul’s Church in Covent Garden. In fact, it was only through an internet search to find the show’s location that I got the slightest impression it might do anything with gender. The advertising and extensive program notes did not mention the show’s unique angle. The production itself did little prescriptive self-reflection on Hamlet’s gender (which transphobic critics, whom Le Lacheur chastised on Twitter, reacted to with confusion). It’s a queer actor’s—and audience’s—dream: to be treated as unremarkable; to have one’s experiences represented as they are without patronizing repackaging for unfamiliar audiences.

The absence of instructive context was, for Le Lacheur, intentional. “In this production, I don’t really think about Hamlet’s gender at all,” they say in an interview with me. Le Lacheur describes their character as “so engaged with the problem” of fulfilling the command to kill Claudius (Vinta Morgan) that Hamlet’s struggle as a semi-closeted trans person is “completely incidental” to the plot. “It’s no secret that I’m using a hell of a lot of myself in this Hamlet,” they say, “and I don’t really think about my gender [on a] moment-to-moment, day-to-day basis.” This effect is achieved by Winder with very few gendered alterations to the text. In place of delivering didactic commentary on gender, Winder illuminates new parts of Shakespeare’s longest play while resolving some of its most enduring interpretive problems.

It’s a queer actor’s—and audience’s—dream: to be treated as unremarkable; to have one’s experiences represented as they are without patronizing repackaging for unfamiliar audiences.

The production is set in a fascist England that is both vintage and near-future in its aesthetic; truly “the time is out of joint.” Feminine characters, including Gertrude (Clare Bloomer), Ophelia (Jenny Horsthuis), a gender-bent Polonius (Paula James), and—when they return to England in act five—Hamlet, are all cloaked and sometimes cowled, perhaps a nod to The Handmaid’s Tale. Flat-screen televisions line the gardens in the churchyard promenade and are embedded in the artificial hedges of the church steps. Often they show state propaganda that reinforces Claudius’s claim to Old Hamlet’s throne, but sometimes they reveal surveillance footage: when the Ghost appears, it prowls through the audience at the same time as it haunts the screens; Ophelia springs an unwanted kiss on Hamlet in her closet; Hamlet tunes in to see Claudius and Polonius listening from behind the church doors when Ophelia tries to return Hamlet’s love notes. The screens also later project Hamlet’s video missives from Fortinbras’ frontlines to Horatio (Harold Addo), as well as Hamlet’s taunting message to Claudius, teasing their return to England. What characters see and what they refuse to see becomes a major driving force in the play. “All of the characters are constantly surveilling Hamlet,” Le Lacheur says, noting that claims about Hamlet’s melancholia “all come from characters who don’t know Hamlet, don’t know what they’re going through, and are trying to downplay their madness.” 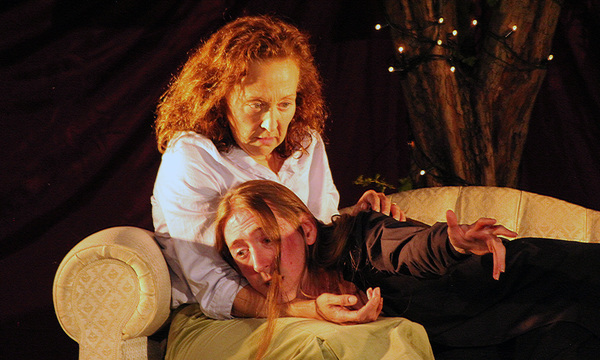 Hamlet as character and Le Lacheur as actor dominate the play, but a trans Hamlet, and an electric cast, compel the audience to see the other characters in a new light through how they relate to Hamlet. Throughout the course of the play, says Le Lacheur, “there are so many moments where Hamlet gets misgendered, that it’s like a shorthand for [their] relationship” with the character who misgenders them. As their university friend, only Horatio really knows Hamlet: he correctly genders Hamlet when it’s only the two of them, they share intimate embraces and near kisses, and it’s around only Horatio who Hamlet initially feels at ease to shed their oversized jacket and expose their feminine clothing. By contrast, Rosencrantz and Guildenstern’s failure to recognize Hamlet’s gender identity further underscores that those formerly close to them cannot see them for who they have become.

Hamlet is caught performing the trappings of masculinity for those to whom they are not out—that is, their family, the court, and their old friends. Hamlet’s reluctance to be out full-time and their vacillation around carrying out the murder of Claudius both originate in their “internalized roadblocks” about their father, as Le Lacheur describes them. Those roadblocks come partially from the dramaturgical decision to portray Old Hamlet as not just a fascist tyrant but also a domestic abuser. Audiences experience the manipulative control of Hamlet’s late father when, during Hamlet’s first encounter with the ghost, Hamlet compulsively mirrors the same choreography as their father, who then grips his child’s head and speaks his lines through them. The influence of the ghost of Old Hamlet lingers like a bruise on the performance: Hamlet’s fawning behavior towards the memory of their father and their idealization of his toxic cis masculinity, Hamlet’s despairing intonation of “I must be cruel in order to be kind” to their mother after killing Polonius; even Hamlet’s anxious tic of clutching of their forearm, especially when they speak of their father.

Hamlet is caught performing the trappings of masculinity for those to whom they are not out—that is, their family, the court, and their old friends.

Moments of internalized misogyny are presented—Hamlet speaking “frailty, thy name is woman” rings as self-criticism, and them uttering, in defeat, “why, what an ass am I” as they remove the stiletto heels they had so joyously donned to dance with the tragedians. And there is a moment of desperate survivors’ solidarity, when Hamlet and their mother exchange a knowing look of despair after Claudius demands that Gertrude not drink the poisoned wine.

“They never got to come out to their father,” Le Lacheur says of this production’s Hamlet. “I think they imagine that if they had, because [they thought] their father was this unimpeachably perfect person, [their father] would have been totally cool with it. [But he] totally wouldn’t [have been].” A lifetime of carefully calculated self-preservation from gendered violence and humiliation is metonymously contained in Hamlet’s stack of love notes that Ophelia returns. They are written on scraps of paper in bold primary colors, which La Lacheur says they chose to signify Hamlet’s imitation of how they think a man should act. The notes might express real love for Ophelia, Le Lacheur says, but “the way that they’re said, and the way that they look, comes from a place of a trans girl going, ‘What do boys do? I’ll do that, and then no one will bother me about any trans thing.’” 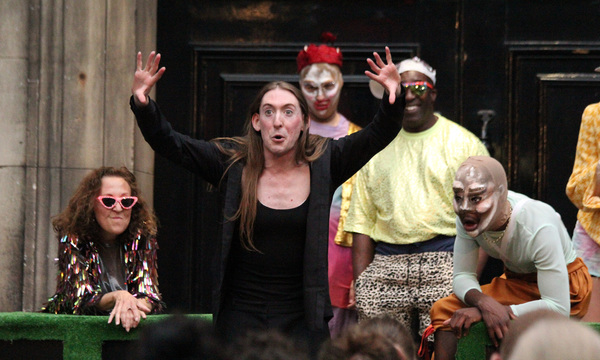 Hamlet never tries to force recognition of their gender in words, and other characters’ unwillingness to acknowledge their queerness—even when Hamlet vogues with Horatio and the tragedians, samples from Paris Is Burning playing on the screens—results in a tragic deadlock. In spite of Hamlet’s fiery energy and commitment to acting “mad in craft,” their agency is undermined by their lack of allies. During the duel with Laertes (Joe Parker), “there’s a moment where Horatio calls me my lady,” Le Lacheur says, “which I had not spotted until about halfway through the run, and I just started going shhh.” Their gender is something they cannot discuss with those they grew up with. Only Horatio is on their side, forswearing his loyalty to the king, bidding Hamlet “good night, sweet love,” and promising to tell Hamlet’s story rightly—perhaps, implicitly, to gender them rightly in the aftermath. But Horatio, as well, is killed before he can finish the story, and Hamlet’s agency is curtailed entirely.