Out of Sight, Not Out of Mind—Hearing the Voices of the Future | HowlRound Theatre Commons Skip to main content

Out of Sight, Not Out of Mind—Hearing the Voices of the Future

This week on HowlRound, we are exploring Theatre in the Age of Climate Change. How does our work reflect on, and respond to, the challenges brought on by a warming climate? How can we participate in the global conversation about what the future should look like, and do so in a way that is both inspiring and artistically rewarding? I met Norwegian composer Marte Røyeng in Oslo after reading an article in The Foreigner about her company’s work with school children, using musical theatre to explore issues of sustainability. Subsequently, I discovered Marte’s own beautiful and haunting climate change songs. —Chantal Bilodeau

When I was little and heard the legend of the Pied Piper of Hamelin, I imagined hearing ghosts—muted wailing from hidden voices. I wondered about the children lured away by the Pied Piper into the depths of a mountain: Wouldn’t they still be alive, only out of sight? Who would care for them?

It’s an unsettling story. It ends with an entire town’s children disappearing. Their parents refuse to pay the Piper for ridding the town of rats, and for this they receive the worst possible punishment—sons and daughters are taken away in the night, never to return.

Hardly a nice ending for a family musical.

But it is a great story for a family musical addressing sustainability. By taking away the children, the Pied Piper essentially robs the town of its entire future.

In the spring of 2012, the Oslo-based group Scenelusa Productions premiered a brand new musical, Rottefangeren (The Rat Catcher). It explores how a community responds to difficult changes, eventually overcomes greed, and realizes what’s truly valuable.

The Project
Six months earlier, Scenelusa Productions—which consists of Mari Andersen, Anna Stenersen, and me—was taken aback by the number of young people turning up to audition. We selected a group with as much diversity as possible in terms of age (ranging from seven to fifteen), stage experience (many having none), culture, and background.

An athletic girl played a poor boy called Limper, the greedy and manipulative mayor was portrayed by a teenage girl with an arresting voice, and the enigmatic Pied Piper was played by a boy with an air of patient determination. The rest of the ensemble embodied the eclectic “townspeople,” with different quirks and qualities. 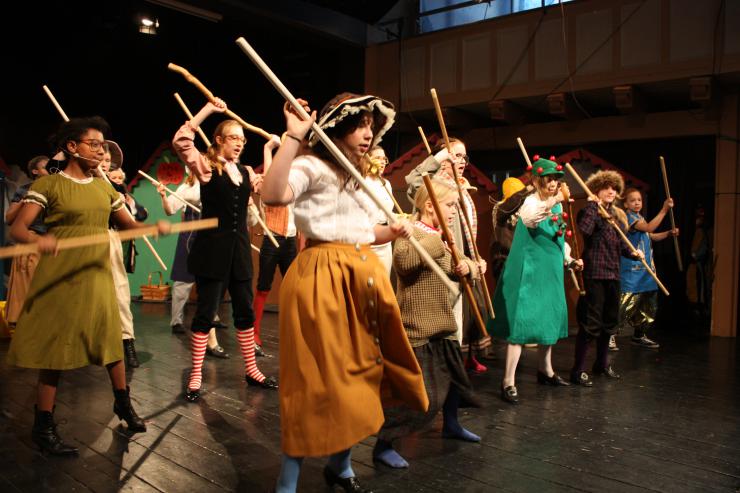 In a sense, the group formed a “town” in real life too, creating an overlap between the message of the play and the social goals of the project. Each person was an important part of something bigger, with the responsibility of making rehearsals a safe place to grow and develop.

So here they were, forty young kids and teenagers with their own experiences, values, and moral views coloring their perception of what they were doing. They were to perform a musical about the nature of poverty, envy, secrecy, and greed. Handing out the script, we wondered if the message inside it would resonate with them at all.

So here they were, forty young kids and teenagers with their own experiences, values, and moral views coloring their perception of what they were doing. They were to perform a musical about the nature of poverty, envy, secrecy, and greed. Handing out the script, we wondered if the message inside it would resonate with them at all.

The whole idea of building a sustainable world would have to come through them, on their own terms, as young people growing up in a country where most of their peers have plenty, and where poverty, climate change, or any other dark global issue is not exactly visible inside the frame of their daily lives. What would strike a chord in them?

Outsiders and Insiders
In the musical, we see how the rat problem—a furry natural disaster—not only disrupts the well-ordered town life, but also reveals a cemented mindset among its people. The townspeople do not generously invite others into their community. Borders are drawn and strangers are treated differently. Even inside their community, there are outsiders—the town’s poor people. The calculating mayor fears the Pied Piper’s magic flute, and fosters an ungenerous atmosphere. Ridiculing the idea of magic, he makes sure that people distrust the stranger instead of questioning his own lack of solutions.

Limper is an outsider. He knows he has less and wonders why it matters. Limper’s story questions why having is considered the norm, and not having earns you a different treatment. 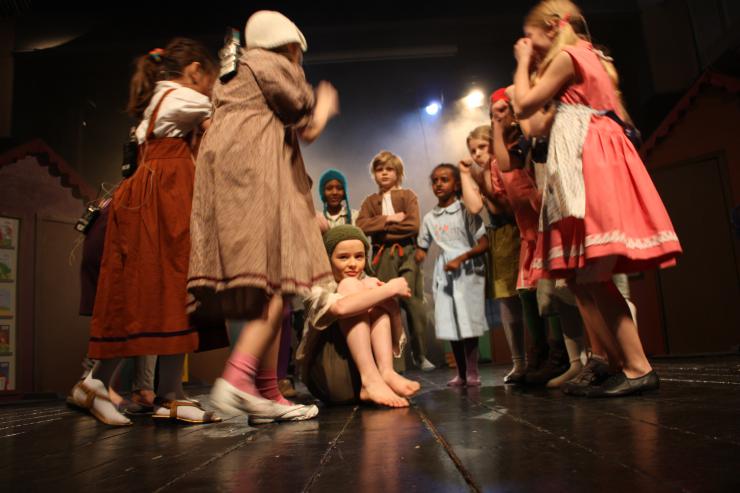 In one scene, the kids gang up on Limper and bully him because of his bad leg, singing over sharp-edged chords that there’s “no need to try/you’ll never make the climb anyway.” They push, kick, punch, and bring him down. Audience members commented that it was difficult to watch—almost real. There was a similar reaction to the scene where the townspeople rally to hunt down the Pied Piper, waving sticks in the air, promising to hit hard. This, along with a later scene when parents are mourning the lost children, seemed to clearly engage our audience.

Against the gloomy backdrop of climate change, young people have every reason to be angry or sad. It seems crucial to invite youth to engage with their world, to react openly by creating something powerful for others to witness.

Limper sings: “You have a spark inside you/waiting to show itself.” Everyone has the potential to matter. It’s a message we can’t tell young people enough—and with the musical, we wanted them not just to hear it, but to feel it.

Who’s on the inside?/Who is part of “we?”/ Where is the border—is it a line around our homes? Or is it wider like ripples on the water? Does this “we” get to shut the rest of the world out? Because where does that leave us in the end?

There’s a need for those who can dig deeply to find the root of the problem.

Limper and the Pied Piper show the town that the solution is not simply to get rid of rats, but to become more generous. For their future to be sustainable, people will need to look further than their doorstep. They have to consider the voices of the invisible, counting those who are far away and out of sight.

Limper’s morality makes him set out to rescue the other children, regardless of how badly they treated him. They are part of his world, and so what hurts them hurts him too. 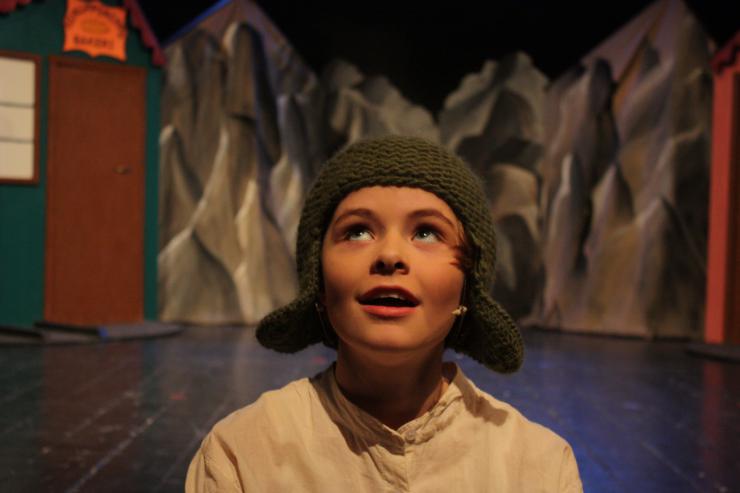 The musical does get a nice, happy ending. The Pied Piper returns the children when the town finally realizes what matters most.

But for the young people on stage, what was important about all of this? What holds value to them, in their reality?

My guess: To have someone pay attention. And listen.

All photos by Ilan Kelman

On Hauling Water: Outdoor Theatre as Re-Enchantment amidst Climate Crisis

Theatre artist Elle Thoni shares their experience working on the outdoor theatre production of a futuristic musical, Queen B, and challenges institutional ideas on how and where theatre can take place.

The Factory of the Future
Zoe
Svendsen
Essay

The Factory of the Future

A Collaborative Project for Imagining Otherwise

Zoë Svendsen discusses working with fellow theatremakers to build and present imagined realities of London and Oslo in post-capitalist and post-fossil-fuel cultures.

The Rise of Climate Refugees in This Sinking Island

Maximilian Kempf discusses climate change theatre through the lens of the Anthropoligists’ show This Sinking Island.