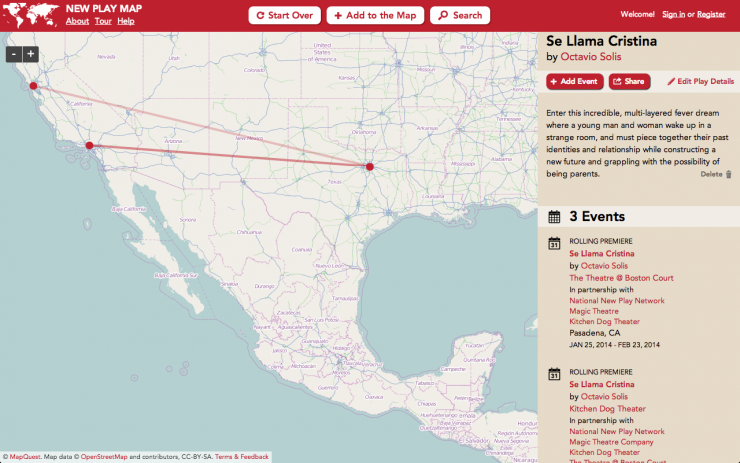 1.  How did the different communities (creative team, location, audience) influence the development of Se Llama Cristina?
Since Se Llama Cristina was commissioned and developed for a time at the Denver Center (DCPA), which didn’t produce it in the end, there was an opportunity to observe how each of the three National New Play Network (NNPN) theaters affected the play.

Each theater company responded differently to the work, and the work accordingly responded back. In San Francisco, the Magic Theatre’s Loretta Greco and I had already forged a happy relationship over each other’s work, and so it was easy to collaborate on Se Llama Cristina. Here, the emphasis was on the missing baby; everything the actors did revolved around the absence of their baby. I attribute this to the director’s own experience with her daughter and the complications that inevitably arise between parenthood and art, which was something I had experienced as well. But she also drew out some of the terrible baggage that my characters carry into their new roles as parents.

At Kitchen Dog Theater, there was an approach of freewheeling fun that infused the work. The company was not daunted by the shifts in time and place; in fact, they saw it as their chance to open up into new forms of staging. They delivered some amazing visual imagery through the use of shadows and video projections, and they served the work beautifully. I made some revisions in the play, but the director mainly trusted what was already on the page and chose to play with the perimeters set down by my text.

The third production at The Theatre @ Boston Court was so astonishingly different, so unique in its approach, and so ultimately more daring, that I wondered if they were really doing my play! Robert Castro, trained in Anne Bogart’s viewpoints, Butoh Dance Theatre, and Eastern spiritual sensibilities, brought all these elements to bear on my play, which he clearly saw functioning as a struggle for enlightenment and completeness. I gave Mr. Castro my full trust as he explored and created the gestural language that would establish the basis for staging the play. The result was a barebones, starkly beautiful installation drama that contained within it the text and narrative structure of my play, viscerally and beautifully acted by the company. It was a design bonanza, too, with stunning work by Gronk, John Zalewski, Ben Zamora, and Victoria Petrovich.

2.  Did you re-write after the first premiere? Second?
The revisions I made for the Magic Theatre production came as a result of at least three readings conducted over the prior year. Once rehearsals for the production began in earnest, the dramaturgical imperative wasn’t so imperative, and if I made changes they were minor. But when the opportunity arose to move the work for a week to another venue, Loretta suggested we try making some big cuts for that presentation. We presented a performance that was significantly shorter than the play we opened with. I learned from that experience and determined that I should restore the missing text for the next production, though with some of the cuts in place.

At Kitchen Dog Theater we proceeded with the sense that the work was more or less finished, but I made adjustments all along the way during that first week of rehearsal. The nature of the cuts or edits were largely poetic, crafting the language more specifically to the new conditions. It was clear to me that the director Christie Vela and this company knew the soul of the piece, and I left them to complete it.

By the time I arrived at The Theatre @ Boston Court, I assumed the work was done. But during our table work, we discovered some curious anomalies that I’d missed before in the prior productions, schisms having to do with my re-ordering of the events of the play in time. The nature of the gestural work also seemed to give me permission to deepen some of the moments a bit further, and I added some text which shed light on the characterizations. But even so, on some of the amendments, Mr. Castro asked me to pull back. He thought they were unnecessary, and I ultimately agreed.

3.  What’s one valuable experience you had during the National New Play Network Rolling World Premieres that made a significant impact on your process?
The final production with Robert Castro called on all my energies to trust the experiments that were being conducted on behalf of my play. I thought I’d been daring enough in my text by using theatrical language and modified tropes which fucked with linear rational narrative, but it was difficult to extend the same courtesy, the same right to be daring, to the company of players and artists working in the room. I could sense some of the actors feeling my resistance, so I determined to dispel any doubt immediately. Yes, I had to acknowledge it at first, even to my director, but then I ejected it from the room and embraced the process wholeheartedly, which energized the actors and made them commit as well.

4.  Se Llama Cristina was originally commissioned and workshopped by the Denver Center (DCPA), but premiered in California and Texas with National New Play Network (NNPN). How did starting from a separate commission influence the NNPN Rolling World Premiere?
On the face of it, starting from a separate commission had zero influence on the rolling premiere. But thinking again on it, I realize that it was at a reading at the DCPA that dramaturg and literary manager Shirley Fishman first heard Se Llama Cristina. She became a huge advocate for the work, and she exhorted Loretta Greco to produce the play at the Magic Theatre.

Also, Juliette Carrillo had directed and developed the play with me at DCPA while we were at Steamboat Springs. When Loretta Greco at the Magic Theatre chose to helm the production in San Francisco, a decision I welcomed and championed, I endeavored to find another opportunity for Juliette to direct the work as well. That’s when Loretta stepped in and suggested working with NNPN and Boston Court. This led to a reading of Se Llama Cristina directed by Juliette Carrillo at Boston Court.

As for the DCPA, they had trusted me enough to ask me for another work after Lydia. And after the initial reading in which we worked on the script, they gave me a further workshop in Steamboat Springs, where the more or less present form of the play took shape. And though the play I wrote for them was not really suited to their stages (even I can admit this), they have supported me throughout its development and remain eager to see where it goes.