Agnes Under the Big Top 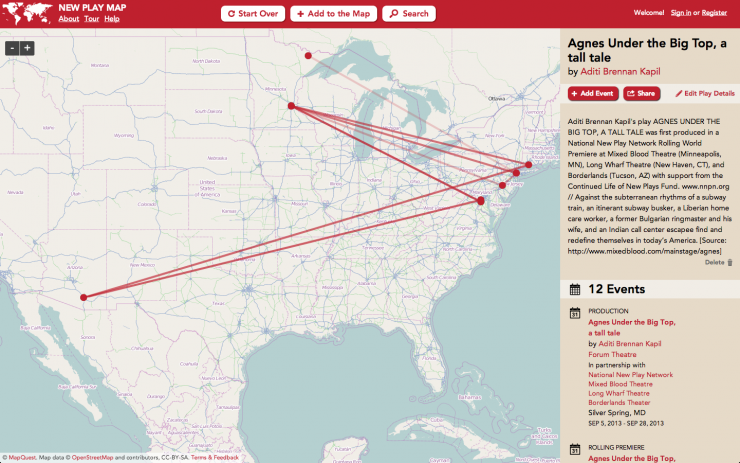 (Click on the image above to view the interactive new play journey of Agnes Under the Big Top.)

1. How did the different communities (creative team, location, audience) influence the development of Agnes Under the Big Top?
Mixed Blood (production 1) and Long Wharf (production 2) began rehearsals a day apart, so that was an unusual case. I directed the Mixed Blood production, and Eric Ting directed the Long Wharf production. Originally Eric was slated to direct both, but that became impossible with the scheduling overlap. It was really interesting, though; our spaces were so different, and with a play that has so much visual metaphor built into it—just the fact that the Mixed Blood production was alley-style, and the Long Wharf production was proscenium, resulted in drastically different productions. Which I loved. Also I had left the character of the Busker in the play intentionally open to interpretation, and that casting choice in every production has really affected the tone and the reality of the play.

Seeing the two versions back to back was an amazing lesson in the elasticity of the script, and also an amazing lesson in how one can build flexibility into a script. With this particular play, I very much wanted to leave room for the director's vision to finish the arc of the metaphor, and in Eric I had a director with a visual imagination far larger than mine. As we passed the script, the images, the ideas, back and forth, we found ways to let air into the script to make room for that kind of creativity, and even once we were both in rehearsals, I felt very protective of his freedom to venture outside of the text in that inspired way that he does.

So Eric's production, which was the proscenium production, had this inspired world on a train platform reality going on, with the Busker as a beat-boxing ghost in the subway creating all the train sounds, and lives passing back and forth like sliding doors, where the central conceit is that we're all on a platform. It was this staging conceit that resulted in probably the most extreme act of letting air and elasticity into the play—I wrote an alternate ending for the Long Wharf production because in their visual reality, it made no sense for the subway driver to deliver the final monologue from the top of the train. It's a slight variation on the ending we used at Mixed Blood, but a completely valid and right one for what was going on at Long Wharf, and both ending options have ended up in the published version. I really feel that the same way that the Busker will change the tone in each production, the staging metaphor is open to interpretation, and it was important to me to make room for that in future productions as well.

2. Did you re-write after the first premiere? Second?
I rewrote during rehearsals for the first premiere, a lot, and I shared all rewrites with the second premiere. The deal was that at a certain point, production #2 had the veto right on any rewrites, but they never exercised it. In one instance, after production #1 had opened and they still had two weeks of rehearsal to go on production #2, we actually adapted a scene rewrite to a combination of new scene and old scene because the actress was too far down a path with the old version to re-direct, and I ended up liking the combo version better, and that's what's in the printed edition. I did rewrites during those last couple of weeks of production #2, as well. And I think I did a sort of script-cleaning before production #3 to solidify all I'd learned in #1 & #2, but most of the rewriting I think was during actual rehearsals.

3. What’s one valuable experience you had during the rolling premieres that made a significant impact on your process?
I think just seeing two such completely different productions of the same play was a huge moment for me. It's something I couldn't have imagined, that it was possible to do it so completely differently and have it be so beautiful both ways. When you only have one shot at getting a play up and communicating it to people, it's easy to get precious and want to get it exactly right, exactly the way you picture it. But the way our process happened, I had the Mixed Blood production that in every way was exactly what I imagined, allowing me to test-drive my script in all the ways I needed to test-drive it, and then I got to go to Long Wharf and have my mind blown in ways I couldn't possibly have anticipated. It was pretty amazing.

4. How did the process at Long Wharf (in CT) and Borderlands (in AZ) contrast with Mixed Blood (MN), where you are in residence?
Well, I directed the Mixed Blood production and not the other two. I was there more. It was in my hometown, with audiences I've performed for, written for, directed for, for years. And with actors and designers I knew and handpicked. I've premiered almost every play I've ever written at Mixed Blood; it's inherently a different experience. It's home and family, with all that entails, both good and challenging.

As a beginning playwright, this interview is so inspiring. I keep thinking that I have to write this perfect full length before even submitting to conferences. This reminds me that the writing/rewriting process is far from over and that collaboration will help guide it.

Thanks for an informative & interesting interview! I saw a reading of Agnes at The Lark some time ago and would love to see how it was realized--missed it at fairly close-by Long Wharf. (I'm in NYC)