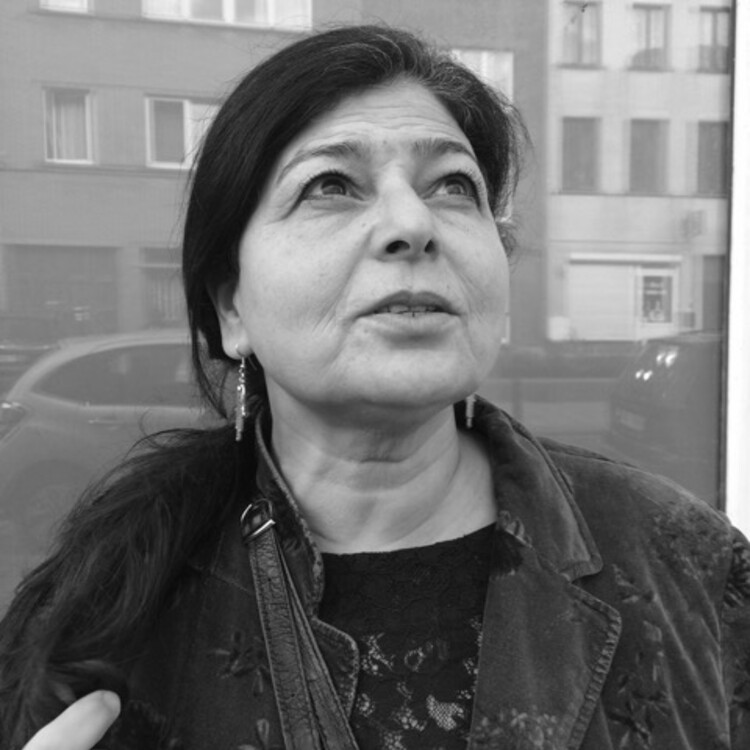 Nedjma Hadj
Benchelabi
Art in the Age of Populism

IETM, International network for contemporary performing arts, will host its Plenary Meeting in Brussels, Belgium 23 November 2017 to 26 November 2017, with a particular focus on the position of the arts in the age of populism. Populism may be considered as an ideology, a movement, or simply a style. Some may perceive it as a weapon against democracy, because it shrinks the space for plurality; some may view it as democracy's last vessel of hope, because it brings politics closer to the people. This series of articles explores how the Belgian arts sector confronts this complex phenomenon.—Elena Polivtseva, Nan van Houte, Anna Scholiers

— From “Three poems” by Abdallah Zrika

Identity, nation, violence, migration, displacement, borders, fears, anxieties... The continent of Europe is teeming with tensions and issues that are both real and fictional. And it continues to build walls that serve no purpose because they are porous, and comfort zones that are ephemeral due to rising inequalities and increasing populist discourse. Is Europe heading for political immobilism?

Paradoxically, this Europe that I’m experiencing in Brussels, Belgium enables me to share in various social and cultural initiatives that offer fine examples of solidarity among its citizens. What should we understand of each other’s everyday lives? What can we take from them? Do we see a new Europe positioning itself as part of the world, rather than acting as if it were the center of it?

I am writing today from Brussels, this city of mine that I’ve been experiencing for almost twenty years—a city among my others such as Algiers, Marrakech, and Cairo, to which I am attached and that come together in projects linking ideas and common issues. Operating out of Brussels, I’m developing artistic collaborations in projects that are building bridges and encouraging dialogue. It seems to me that in the last few years I’ve been engaged more in stitching worlds together, almost putting sutures into gaping wounds, with memories of a recent and violent past undigested by either side. And I keep thinking about our cultural projects and their ability to encourage dialogue in order to dress the wounds in a pervading context of populism that goes hand in hand with growing conservatism.

When diversity is bandied about as value being added to cultural institutions, it becomes simplistic and not very good at rendering the complexity of contemporary society in Brussels. This soothing, guilt-assuaging concept of diversity is no longer enough.

Today, after having worked in cultural institutions for many years, I’m operating more freely out of Brussels and working on projects as a performing arts curator with partners who are principally from outside the EU. An intentional double displacement that has allowed me to seize a concept of time other than the one that is valued and practiced by cultural institutions, particularly those devoted to the performing arts in Brussels (the ones I’m familiar with at least). The more intense this practice becomes, the more I realize that the value scales and concepts of time are hard to combine. Often these projects are highly relevant, developing raw and essential artistic material, even though they are being developed against a backdrop of practically non-existent funding for those outside the EU.

Today, in Brussels, this freedom is combined with vulnerability in a society where populism seems to reign, where generally speaking the agendas of institutional structures combined with the criteria for subsidies define the rules of the art and culture market. Are we coming to a cultural industry that is allowing itself to be contaminated by growing populism?

But what is populism? How should such an omnipresent term in our media and our debates be defined? Cas Mudde describes it as “an ideology that considers society to be ultimately separated into two homogeneous and antagonistic groups, ‘the pure people’ versus ‘the corrupt elite,’ and which argues that politics should be an expression of the general will of the people.”

Talking about an homogenous group of people suggests a kind of “monocolor” and would therefore be a search for a unifying ideal where all the other options have to be disciplined—punished, even. So populism is veering towards a promise of a happy ending. Even more so, these populist discourses guarantee this ideal model, allowing an/their absolute knowledge to be assumed. In fact it’s a kind of established delegation of responsibility to define absolute knowledge as being superior to existing and future knowledge. This absolute knowledge can be interpreted within this dominant culture (leitkultur or leading culture). I fear a stranglehold on a cultural vision that also has a dominant color. A dominance that often legitimizes diversity so as to limit it within an understanding associated with the discourse on identities and origins, generating too much of a feeling of community in my opinion.

When diversity is bandied about as value being added to cultural institutions, it becomes simplistic and not very good at rendering the complexity of contemporary society in Brussels. This soothing, guilt-assuaging concept of diversity is no longer enough. And in the projects being developed, few real traces remain that reflect the plurality of perceptions or effective consideration of these plural cultural conceptions.

The dominant culture is the one that is reinforced, legitimized by the funding it receives from the authorities. It is a cultural vision by a dominant class (leading culture) consisting of a succession of ill-assorted projects dispersed in tiny quantities into seasons and not up to the demands being made on them. It turns out that despite a few wonderful initiatives on the go, many are being put out of the running, outside of the dominant culture, and consequently fatally outside of funding. Being out of the picture will make way for a kind of “replacement” of roles with fantasized contents, often idealized through good intentions.

Paradoxically, this plurality of concepts exists in Brussels and can be perceived through other interpretations and collaborations. Brussels allows us to see a few formats outside the norm, but can they survive when the current dominant cultural field makes them so vulnerable?

I am not going to list these initiatives here; that is not what this article is about. It’s about questioning their vulnerabilities and perhaps taking the time together to reflect on why they are struggling. It’s about pleading for the kind of projects that are not systematically defined under the subsidy objectives being practiced in this plural Brussels. A plural that can generate from these many layers inherent in migration flows that are not exclusively the result of recent wars and conflicts in the world. This deserves to be seen from every angle, not just by adopting an approach that highlights the present experience of the new migrants and hides the layers that went before. And so perhaps by putting it in a wider context of the history of flows and displacements of peoples and individuals, we will have a better understanding of it. And we will also be able to understand it without placing ourselves outside it, but rather by positioning ourselves within it as people passing through.

Several initiatives are underway in Brussels that cover the issue of migration and social cohesion from this perspective. You often hear a desire to listen to those without a voice; there are more “words” for them. We’ve used all kinds of other words: immigrant, exile, undocumented migrant, illegal immigrant, refugee…and each refers to a time and to our anxieties. The Turkish and Moroccan immigrants who came in the 1960s and 70s are no longer top of the list as long as things are calm in the city center.

So resistance is needed to encourage the effective plurality of projects and concepts instead of a diversity that promotes identities. How should this resistance be nurtured in a context bathed in a culture of fear and the fear of being afraid? What’s the missing link in our society so that the cultural landscape is not defined exclusively by the usual suspects? Are we only good at promoting the theatre of the oppressed, workshops with refugees, and people who love what are known as disadvantaged neighborhoods? And even in these participatory projects, often called social and cultural projects, even here the artistic leader is very often also a “usual suspect,” the “bekende kunstenaar,” or well-known artist who is suited to working in the field of diversity. But why are projects involving refugees, migrants, the newly arrived, disadvantaged youngsters often put together with an artistic leader who has been established under western codes, with little effort put into identifying other potential players?

How can cultural projects be freed from established codes and allowed to create new performances and develop links between all the people passing through our society? As Achille Mbembe wrote in Le Monde,

The terms of performance will have to be reinvented in such a way that all voices are heard and actually counted. If there the principle of equality lies behind the foundation of democracy, then it has to be recognized that a certain level of social inequality endangers the very idea of democracy… In the end, passing through is the earthly human condition. Ensuring, organizing and controlling this passage through and not instructing new closures, in my opinion that is the task of democracy in the planetary era.

Populism may be considered as an ideology, a movement, or simply a style. Some may perceive it as a weapon against democracy, because it shrinks the space for plurality; some may view it as democracy's last vessel of hope, because it brings politics closer to the people. This series explores how the Belgian arts sector confronts this complex phenomenon.

Art in the Age of Populism