Towards a Commons | HowlRound Theatre Commons Skip to main content

On an afternoon in early August, forty people kicked a soccer ball across a field in central Massachusetts. 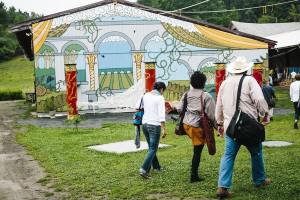 Led by Carlos Uriona of Double Edge Theatre, we kept moving in an improvised swarm as we sent the ball from one person to the next. Though this practice—part physical, intellectual, spiritual—is an element of the company's training, this afternoon a new ensemble was taking shape in those random divinations on the grass. As the ball moved from filmmakers to writers, academics to farmers, we brought to a close the inaugural meeting of The Rural Arts and Culture Working Group.

This kinetic metaphor made sense to a gathering of folks who traveled from across the country to the small town of Ashfield, the home of Double Edge Theatre. We had already witnessed the ensemble's performance of The Odyssey, their annual "summer spectacle" that tells its story across the buildings and environs of its Farm Center. Just as the tale of Odysseus is one of moving forward, however circuitously, toward a homeport, many of this Group's participants had weathered that modern Scylla and Charybdis—airports and cancelled flights—to arrive at their destination. 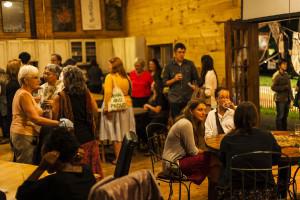 The Rural Arts and Culture Working Group was the first such meeting of its kind: an intense, three-day program of conversations, break-out sessions, and panels intended to create a sustainable effort to both share stories and provide advocacy for the diverse efforts within rural arts and culture. Our time together was made possible by Americans for the Arts, Arts and Democracy, The Bush Foundation, The Center for Rural Strategies, Greenfield Community College, The National Endowment of the Arts, and The New England Foundation for the Arts.

We began our work by starting from these shared points of belief:

Cross-cultural, interdisciplinary, and intergenerational, we convened with a faith in the power of artmaking to both express and reimagine the cultural life of rural America. As we've all seen art change the lives of individuals and communities, we also feel that it can play a profound role in shaping how rural America is represented in national policy discussions. Artists and cultural practitioners can create powerful narratives and metaphors to a host of policy concerns, from rural broadband to economic development to issues of cultural equity for the changing face of rural America.

Cross-cultural, interdisciplinary, and intergenerational, we convened with a faith in the power of artmaking to both express and reimagine the cultural life of rural America. 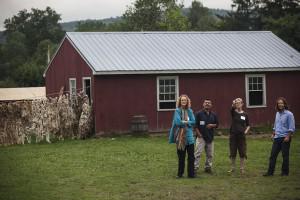 Though folks hailed from across geographies and communities and defined "rural," "arts," and "culture" differently, there was a shared sense that a new narrative of rural experience and artmaking was necessary—that new avenues for communication and partnership were essential. Many of us also shared the sense that we were doing this work not for ourselves, but for our children and grandchildren, so that when they come of age they won't have to build this kind of effort again—it will already exist as a resource, a community, and a point of inspiration.

Census figures support what's apparent across many regions of the country, that rural areas are becoming diverse at greater rates than the cities or suburbs. People of color are the future—and the future majority—of rural America. The pastoral vision of white Protestant farmers, or even overwhelming numbers of farmers themselves, is no longer the reality. In a similar disconnect, while Rural America stands as roughly 20% of the population, and 80% of its land mass, these artists are often isolated both from each other and from the possibility of creating a larger narrative.  As the moral failure of American philanthropy's 1% investment in rural America suggests, too often a seat at the table for "the rural" has been withheld. 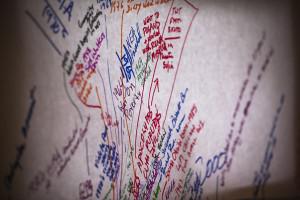 Instead, as Kelle Jolly of Carpetbag Theatre suggested, one of the first goals of this Working Group is to welcome folks to our own home tables, to carry the energy and focus that began at Double Edge into the particularities of our places, and to welcome new voices to the table. Though digital media presents an opportunity to bridge the distances between us, real human relationships must guide such technology. Beyond mission statements and white papers, this collaboration must occur with a sense of mutual understanding. And it must create more than just stimulating conversation.

In that respect, many of the conclusions and points of action for this work emerged around a metaphor also deeply connected to the mission of HowlRound—the necessity for a commons.

While the Working Group will establish a digital commons (on its website and the Rural Arts and Culture Map), further outreach and collaboration will be focused on creating documents and case studies, partnering across sectors and disciplines, and in considering how these conversations can also inform responsible policy. We are advocating for this perspective within our fields, sharing our work at regional and national arts events, and, most in keeping with the sense of the word, working to enrich our common ground with our audiences, colleagues, and home communities. 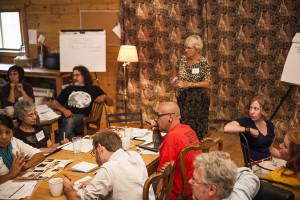 But this conception of the commons is not an idea confined solely to areas that demographers would deem "rural." Recent generations of artists further confuse such easy definitions; rural-born individuals attend MFA programs and choose to create work in urban environments, yet still proudly maintain a rural identity—these individuals are part of an unacknowledged rural diaspora. Similarly, a great many artists are picking up shop and heading for exurban communities, keen for a sense of freedom and physical space. As these groups move back and forth across these spatial borders, what constitutes "rural arts and culture" is again complicated—in very productive ways.

This notion of expanding definitions of the rural emerged in the middle day of our gathering, as Double Edge Theatre hosted an event in its Conversations series devoted to these questions. "The State of the Rural Arts: Crisis, Change and Opportunity," which was also livestreamed on #NEWPLAY TV, offered panel presentations that prompted an open exchange on many of the questions and motivations central to our gathering. One of the metaphors that we circled around was the possibility of "the contact zone," what literary critic Mary Louise Pratt calls "social spaces where cultures meet, clash, and grapple with each other." Far from the idyllic rhetoric and sentimental notions of "the simple life," Dr. Pratt's perspective more accurately describes the condition of rural America—and the great possibilities for the art that will tell its story. 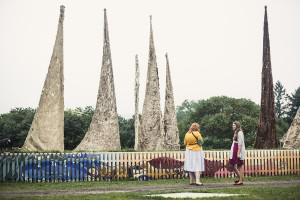 Perhaps, all along, our rural commons have also been contact zones. As this Working Group considered its path forward, actors from around the world and audience members from across America passed through the grounds and the Farm Center at Double Edge Theatre, in anticipation of the evening's performance of the Odyssey. Like the soccer ball that Carlos threw into the field, we had our metaphor—and our imperative to continue— right in front of us.

The Birth of a Climate Commons for Theatre and Performance

Lani Fu introduces the Climate Commons, an initiative that emerged from the Theatre in the Age of Climate Change convening in June 2018.

This is a very dynamic group that holds great promise for the rural arts field. Matthew Fluharty is one of several leaders that are making things happen.