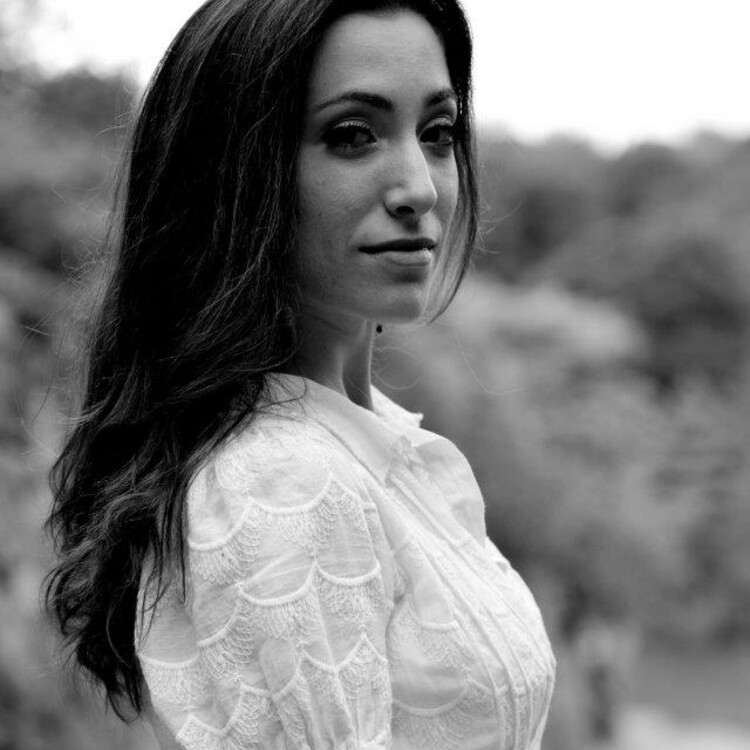 Tragedy That Heals Amid Heartbeat Laws

Yerma, or “barren” in Spanish, part of Federico García Lorca’s “rural trilogy,” depicts the title character’s descent into madness due to her inability to conceive. In a vibrant adaptation by Melinda Lopez (the Huntington's Playwright in Residence through the National Playwright Residency Program), which recently ran at the Huntington Theatre in Boston, Massachusetts, director Melia Bensussen roots the production in deference to the laws of nature so palpably present in a woman’s body and honors Yerma’s willpower even as it drives her to madness.

The Huntington’s production provided much-needed space for a predominantly female cast, led by Nadine Malouf as Yerma, to be sexual, to seek solace, to practice magic, to bleed, to sleep around, to regret, to rage, to mother, and to commune. Yerma was the barbaric yawp many of us needed, putting us in touch with our primal instincts, celebrating womanhood in all its difficulty, and ultimately punishing the patriarchy. 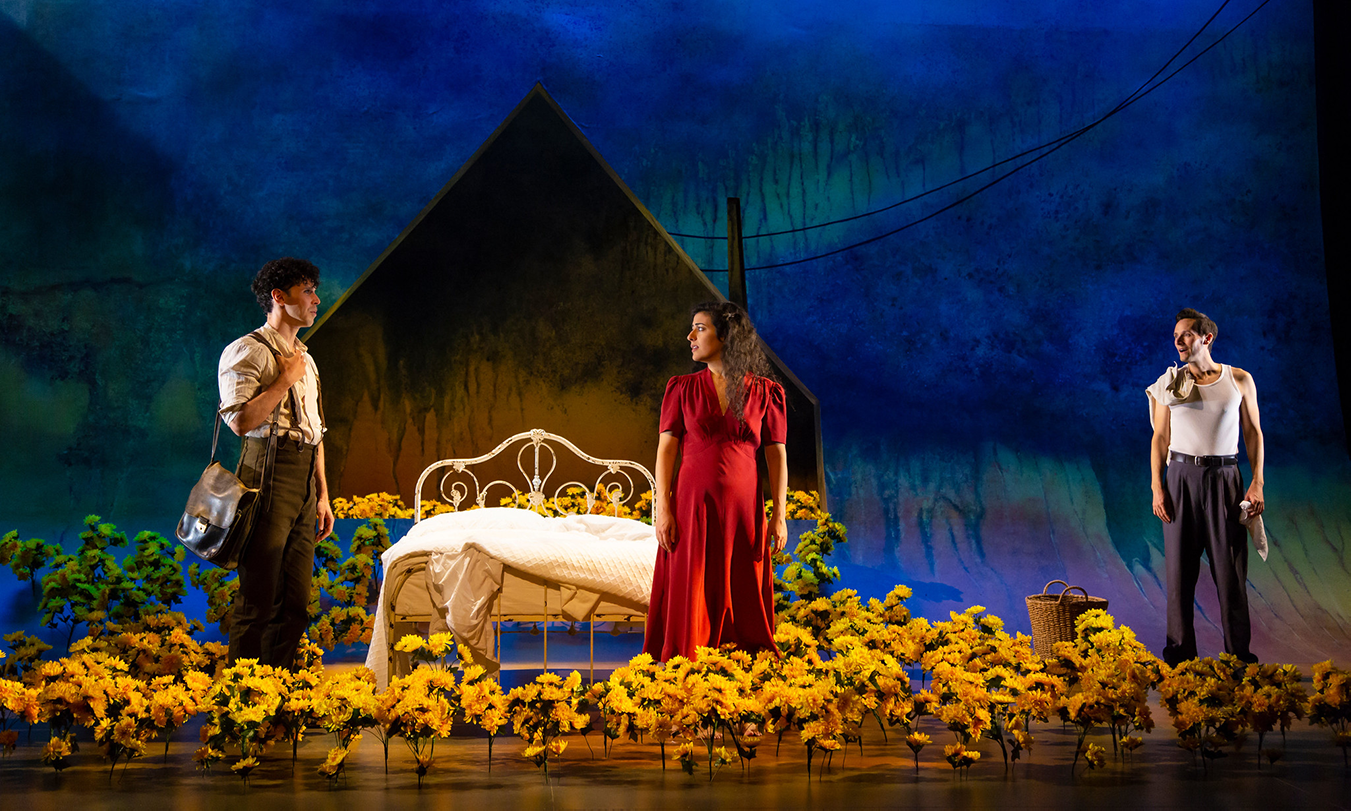 In his poetry and plays, Lorca brings our primordial nature bubbling up through florid, rhythmic layering of symbolic images. However, this rich density can cover the story and characters in a web of lace, obscuring clarity. In her adaptation, Lopez simplifies speech while maintaining the metaphor-rich verbiage of the farmland where Yerma lives (the bedsheets smell like apples, recalling harvest, love, and Eden). Some of the more symbol-laden text, too beautiful to lose, becomes song, carrying the audience through the poetry. Flamenco-inspired music by Mark Bennett, performed by Fabio Pirozzolo and Juanito Pascual, implicates the play’s Spanish origins and accesses the pulse of blood only rhythm can, intensifying the audience’s connection to the deep emotional currents of the play. In tones earthy and ethereal, villagers celebrate the harvest, make the work bearable, lull babies to sleep—even if the baby, as in Yerma’s case, does not exist. These characters are Lorca at heart, but Lopez has made them approachable.

Melia Bensussen roots the production in deference to the laws of nature so palpably present in a woman’s body.

The elemental aesthetic in Olivera Gajic’s costume design, Cameron Anderson’s set, and Brian J. Lilienthal’s lighting also help to maintain the duende of Lorca’s original work. Making the spiritual palpable connects the audience to Yerma’s story on an instinctual level. In the first scene, Yerma wears white, newly married and certain that she’s pregnant. After bleeding onto her dress, she wears red, standing out from the other women who have all born children, who complement one another in brown, green, and modest florals. The men, in unbuttoned shirtsleeves and high-belted slacks, are sweaty in the heat of work, the climate, and the possibility of sex. A pure white bed calls for Yerma and her husband to try again throughout the play; it’s where the action begins with hopeful copulation and ends in mariticide. All around the bed, bunches of yellow flowers sprout from the stage, turning it into a field the characters harvest. This may be the play’s best idea, matching Lorca’s ability to make the emotional tactile. The disappearance of the flowers mimics the growing certainty that Yerma will remain barren. Sensual invitations into Yerma’s world—from a rust-colored house reminiscent of farming tools and orange clay to a painterly sky dripping like dyed cloth and a blood-soaked dress—help us commune with her throughout her descent, which Nadine Malouf so beautifully conveys. 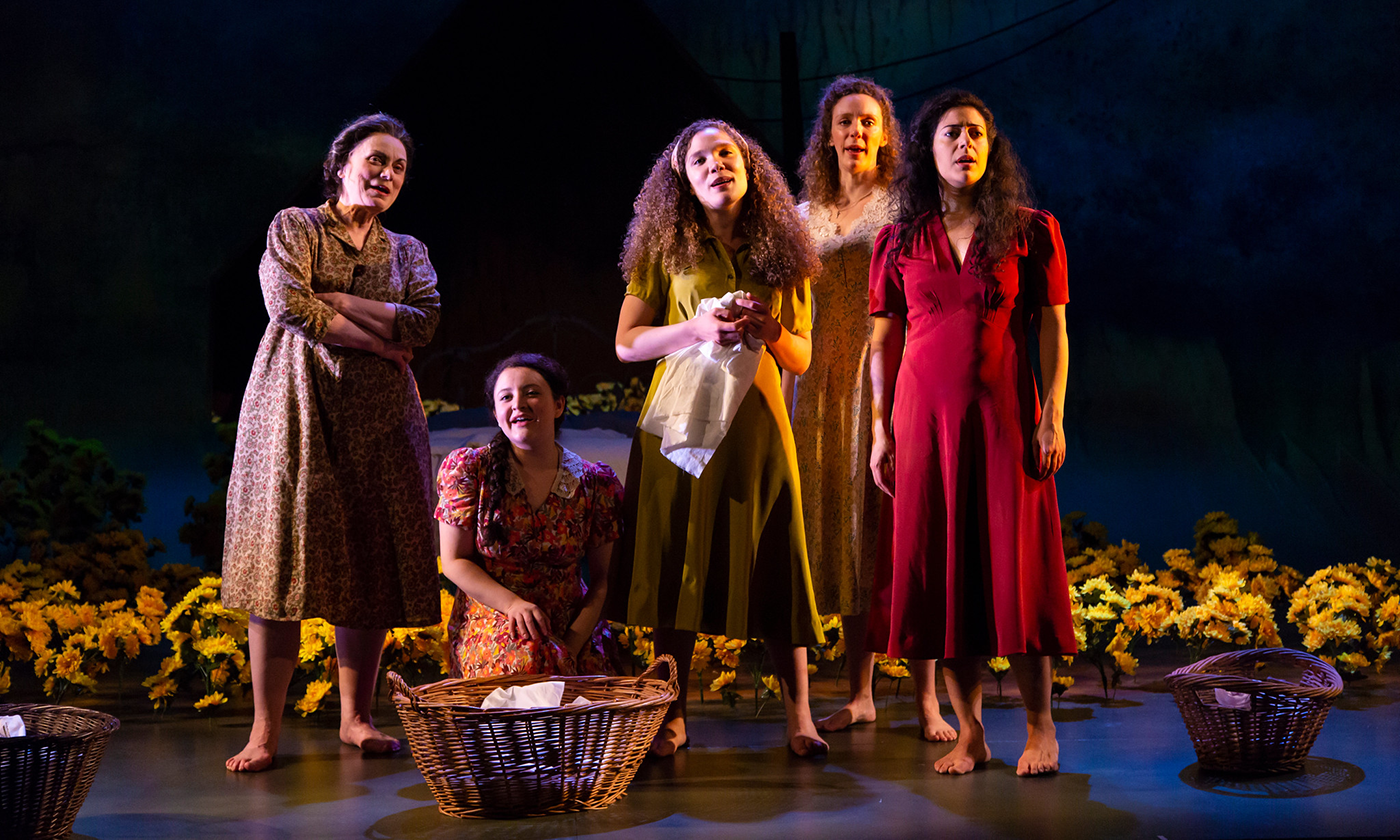 Essential to the play’s success is the audience’s relationship to the title character. While audiences of any time and place may harbor judgments about Yerma’s choices, opinions in 2019 about women’s childbearing rights vary wildly, with lawmakers insisting rape victims carry out their terms and some women viewing motherhood as trite, unimaginative, or even irresponsible. While the play was coolly received in the 1930s for challenging traditional Spanish values, today the character of Yerma could be seen as naïve or lacking in self-actualization. Malouf lends integrity and brightness to the role; I never doubted that the drive to have a child originated from Yerma’s own will. Because of this, the audience, no matter their views on motherhood, roots for her to succeed.

Without our buy-in to Yerma’s desire, we would not experience the play’s tragic arc. Through her exuberance, Malouf is able to convince us in the opening scene that Yerma may actually have a child by the end of the show. Her belief in her future motherhood infects us, and Malouf’s chemistry with Christian Barillas as Yerma’s husband Juan creates a promising domestic picture. As the narrative moves forward, we continue to empathize with her as her spark of hope darkens visibly, her feelings of guilt and doubt increase, and her sense of self erodes. Malouf’s physicality crumples inward, her eyes dim, but in flashes of desperation her face comes to life, her body is ready to spring into action if it will get her what she wants. Malouf carries Yerma’s need for a baby within her throughout the show, until she finally kills it.

The women’s own natural power, nurtured by ritual, is what takes effect.

While Yerma’s pursuit of motherhood originates from within rather than from patriarchal expectations, male-dominated society does come to oppress her through Juan’s restrictions on her freedoms. Unduly suspicious of Yerma’s close relationship with childhood friend Victor (Ernie Pruneda), Juan insists she not leave the house and assigns his ghoulish sisters to keep incessant watch. He himself refrains from sleeping with Yerma despite her pleas. Barillas, through Juan’s drunken stupor, is able to show us the heartbreak that keeps him away, unable to stand Yerma’s pursuit of a child he knows they will never have. But he provides enough tenderness that we still hope the love we saw between the husband and wife in the first scene will rekindle. 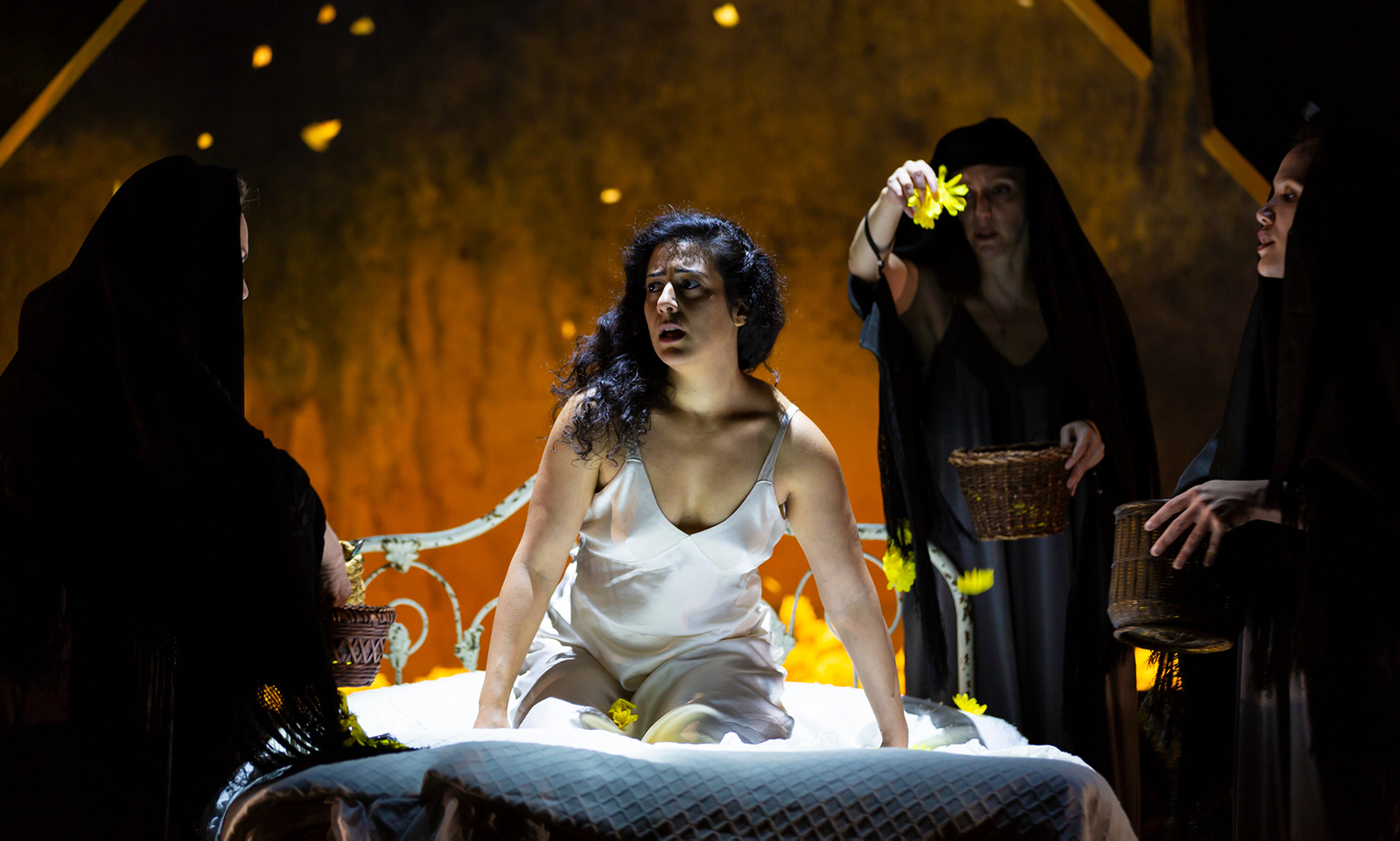 Vital to the play’s feminist bend is the cast of women in Yerma’s village who offer Yerma various choices, at times acting as support and at others treating her like an outcast. Blaming Juan for Yerma’s lack of a child, Incarnacion, an older woman played with mischief and wisdom by Alma Cuervo, attempts to set up a tryst for Yerma. Incarnacion provides refreshing frankness about women’s enjoyment of sex. Maria, Yerma’s childhood friend played by brassy Marianna Bassham, shares Yerma’s excitement about having a first child but slowly tires of motherhood’s thankless work. In a strong scene between the estranged friends towards the end of the play, both women admit to being jealous of the other’s life. All choices have their trade-offs and resulting difficulties.

She “smashes the patriarchy” in an act of inhumanity.

Marta, a neighbor with a rebellious spirit energized by Evelyn Howe, shows the most respect for Yerma’s decision-making. At first encouraging Yerma to enjoy being childless, she ultimately seeks to help Yerma in her desperation, bringing her to Dolores (played by Lopez in lieu of Jacqui Parker), a mystic who helps women gain or rid themselves of children. Significantly, Dolores reveals that she provides a placebo: the women’s own natural power, nurtured by ritual, is what takes effect when they come to see her. Juan, representing the patriarchy, charges in and stops them from summoning their intuitive magic. 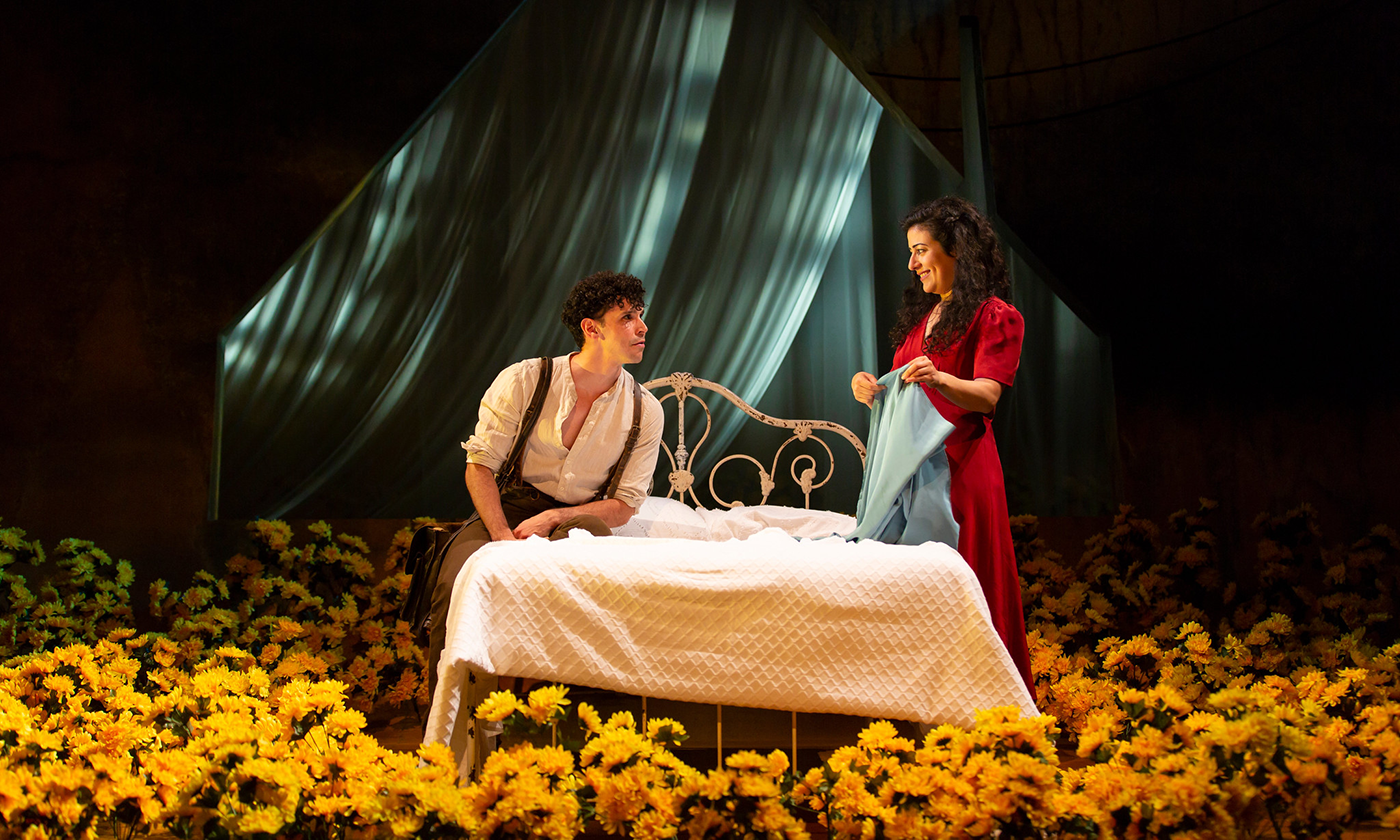 In Yerma’s ultimate transgression, there is an element of triumph amid the tragedy. Her choices have been taken away by the final act—her body will not obey her, her husband will no longer lay with her, she is not allowed outside alone, and when she seeks help from her fellow women, she is stopped by Juan. Her choice to kill her husband, and therefore her hope for a child, releases her from the torment of this desire; Yerma’s insistence on eternal fidelity, another traditional value, has been proven by this point in the play. Juan’s death sets fire to her past identity, completing her transformation from hopeful giver of life to destroyer of it. She “smashes the patriarchy” in an act of inhumanity (not the way we will do it, but a hint cathartic nonetheless). Despite our sadness at the unraveling of this woman and the horrific death of her husband, Bensusson’s direction and Lopez’s script offered healing by putting the power of a woman’s will, body, and choices onstage in complex, deeply felt ways. Yerma may not have borne a child, but the primal feminine intensity created by the artists in the Huntington’s production will live in my body and spirit for a long time.