Recommended
Devising Our Future
HowlRound Theatre Commons
Most Discussed
Designing Collaboration: In Search of a Taxonomy of Collaborative Methods
Emily McConnell
Most Watched
The Gathering from the CrossCurrents Festival
Wednesday 4 May to Saturday 7 May 2022
Upcoming
Livestreaming a Conversation: Suzan-Lori Parks' Watch Me Work
Monday 30 May 2022
Essay by
Jennifer
Wintzer

Unloose This Tied Up Justice

SHAKE 38 and the Measure4Measure Project

Shakespeare Festival St. Louis presents Shakespeare and works inspired by Shakespeare. We are in the schools, in the streets, and in the park. Our work seeks to better the community, facilitate a diverse conversation, and encourage collaboration across disciplines. Through the Festival’s community-wide program, SHAKE 38, we invite St. Louis to participate in a marathon celebration of Shakespeare’s thirty-eight plays. Since the first year in 2010, SHAKE 38 has grown from a thirty-eight-hour performance by 200 artists to an event attracting up to 2,000 artists from across the region and a variety of community partners. This year, for the first time, SHAKE 38 extended to a national audience by bringing artists together for the Measure4Measure Project.

As Director of Community Engagement and Education for Shakespeare Festival St. Louis, I have been engaged in conversations with educators about how to best support our community of young people in processing and responding to the events of Ferguson. In the fall of 2014, the Measure4Measure Project was born out of one of these conversations with Dr. Jonathan Smith, Assistant Professor of African American Studies at Saint Louis University. Dr. Smith described how many of his students were using the Occupy SLU movement to respond to Ferguson and how he was providing a platform for his students’ voices to be heard. As a poet, Dr. Smith was asking his students to write.

Fast-forward a month later to a conversation with my colleagues at MCC Theater Youth Company in New York City. MCC Youth Company is dedicated to encouraging students to discover and explore their unique artistic voices as they work together to create and perform original work. MCC’s Director of Education, Carrie Azano and Director of the Youth Company Acting Lab, Jennifer Shirley said their students had a desire for their voices to reach Ferguson. They wanted to find a way for the young people of St. Louis to hear that the young people of New York City know that their voices matter. 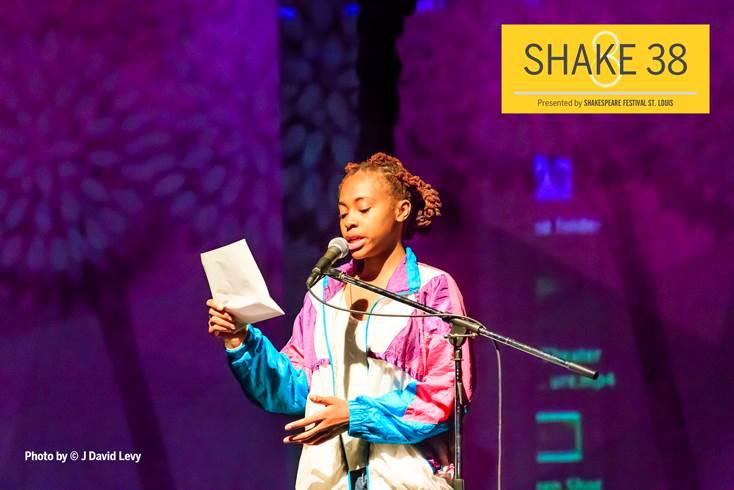 And from that moment, SHAKE 38 became a platform to facilitate conversation across the country. A call for submissions was posted by Saint Louis University for spoken word and poetry to be shared on themes of justice and equality from Shakespeare’s play Measure for Measure. The project culminated in a film, by Alec Wild. Wild weaved text from the Bard’s play alongside student poetry and select work from professional artists in the St. Louis spoken word community. The film premiered this past April on SLU’s campus as one of the many community-driven Shakespeare events in the Festival’s SHAKE 38 program. Here is what our partners had to say when asked “Why this project? Why now?”

Carrie Azano, Director of Education, MCC Theater, New York City:
One student said that they weren’t allowed to talk about Ferguson in her humanities class because it was “too inflammatory.” Another student came to my office, shaken up because she had just discovered that not everyone learns how to deal with police the way she did as a young person of color. Several could repeat their parents’ opinions, but were still formulating their own. And while they all had something to say, they didn’t have a safe space to say it.

The gap between what these young people felt and what they felt they could do was significant.  Who would listen? What impact could they have? Overseeing the Youth Company at MCC Theater, my staff and I felt a tremendous responsibility to care for their voices and to give them that time and space to examine what it meant—for them and for our society—that another young unarmed black man was shot and killed by the police.

I’m proud of the young people from MCC who spoke up, and who continue to speak up in their own communities and on stage in New York. I’m hopeful that these voices will be heard and perhaps will make an impact on someone who thinks differently.

Kimani, MCC Youth Company, New York City:
If injustice is the match that sparks revolutions, artists make sure everybody knows and cares about the fact that a revolution is taking place, and they try to get everybody on the right side of history. The students in St. Louis are near the epicenter of racial tension in this country. They can do things in the movement and be involved in ways that I can't, and I want them to realize how important that is.

Jose Olivarez, Poet-Linc Manager, Lincoln Center Education, New York City:
Zora Neale Hurston let us know that “If you are silent about your pain, they’ll kill you and say you enjoyed it.”

When Jennifer [Wintzer] reached out to me about a collaboration between young people in St. Louis and New York City responding to the themes of justice and equality, I knew that my students would be interested in participating in this exchange. This collaboration was important to us because community is a core value of our program. We were excited to get the chance to build community with writers in St. Louis. To exchange stories with each other and find out firsthand what is really going on. I like to think of this collaboration and the resulting short film not as the end, but as an invitation to join the conversation: Ferguson is everywhere in America.

Keanna, Poet-Linc Poet, Lincoln Center Education, New York City:
Starting with the Shakespeare quotes we were given the option to use, I chose "common justice." It resonated with me because I believe common should be the definition of justice. We all share a common humanity and we should all be treated accordingly. I wanted to share my work with students in STL because it’s a message I think people need to hear. It’s time for people to write their own future.

Aries, UrbArts Teen Poet, St. Louis:
After seeing the poets from New York, I realized there are a lot of young people who care about injustice in our society. There are enough of us who are willing to speak up for the change we want to see. I think it is very important that young people share their beliefs. We are the future. We're capable of making change, but it has to start with us saying what we think.

You can view both the MCC YC full student submission and the final Measure4Measure film by Alec Wild here:

Missouri
Political Theatre
Shakespeare
U.S. by State
Most Discussed
Designing Collaboration: In Search of a Taxonomy of Collaborative Methods
Emily McConnell
Most Watched
The Gathering from the CrossCurrents Festival
Wednesday 4 May to Saturday 7 May 2022
Upcoming
Livestreaming a Conversation: Suzan-Lori Parks' Watch Me Work
Monday 30 May 2022