On February 15-16, 2015 New England Foundation for the Arts’ National Theater Project, along with Alternate ROOTS and Turner World Around Productions convened the Mississippi Performing Arts Summit in Jackson, Mississippi. The Summit created an opportunity for local and national artists, presenters, and arts service organizations to discuss the crisis of cultural equity within the performing arts by focusing specifically on the arts landscape in the South. As the Summit’s producer and a ninth-generation Mississippian—I spoke about the state of the arts in Mississippi in the following address. 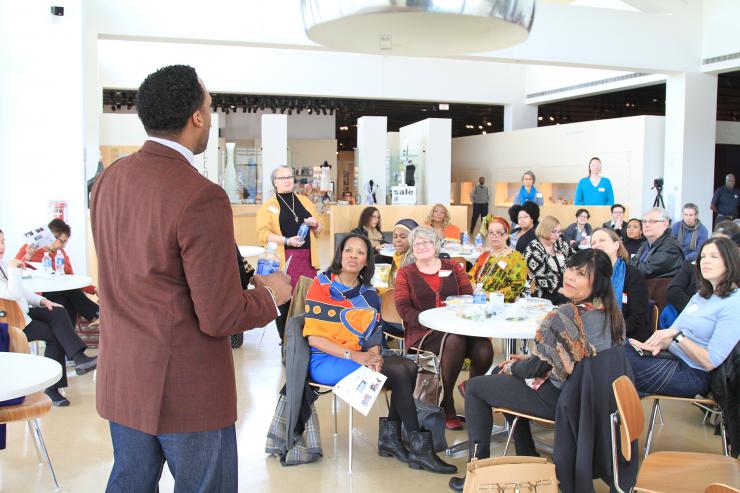 Welcome to Mississippi. The name Mississippi is Ojibwe and means Great River. The name of the state, like many of the counties and towns in it, are Native American in origin and it reminds us that we stand on occupied territory. The Choctaw People originally inhabited this particular land.

Most of the Choctaws were relocated to Oklahoma after the 1831 Treaty of Dancing Rabbit Creek, but some still remain as part of the Mississippi Band of Choctaw Indians in Neshoba County in Central Mississippi.

Mississippi, also known as the Magnolia state, is considered to be the birthplace of America’s Music and home of the Blues. American music traditions of gospel, country, jazz, and rock and roll were all invented, or heavily developed by Mississippi musicians, many of them African American, and most came from the Mississippi Delta.

We also grew a few athletes, including Walter Payton, Brett Favre, and Jerry Rice—I’ll put that offensive trio up against any three in history.

Mississippi. Just the utterance of the word conjures black and white images of state sponsored violence, extreme poverty, and a race to the bottom of national education and health statistics. But for many native Mississippians and transplants alike, the word means home. This has been the home of my family for eight generations.

Up until the 1930s African Americans were the majority population in Mississippi. But the effects of the Great Migration, which lasted from 1910-1970, saw six million blacks leave the rural south and move to the Northeast, Midwest, and West. But even after that great exodus, Mississippi still retains the highest per capita population of African Americans in the country.

Fifty years ago Jackson, Mississippi was ground zero in the fight for Civil Rights. Thousands came to Mississippi to work with the faith community to aid in the struggle for basic human dignity for all of its citizens.

It was also in that summer, a little more than fifty years ago, that Fannie Lou Hamer, Ella Baker, and Robert Moses, through the auspices of the Student Non-Violent Coordinating Committee, started the Mississippi Freedom Democratic Party. They traveled to New Jersey in 1964 and challenged the legitimacy of the all-white Democratic Party delegation.

It’s also important to note that the Free Southern Theater was born at Tougaloo College in Jackson, Mississippi out of this same movement womb the year before. It later relocated to New Orleans.

Fifty years later, Mississippi has the highest number of African American elected officials. But despite the increased participation of African Americans in the political arena, Mississippi still upholds some of the most conservative state politics in the nation. Good ol’ boy values that serve private interests at the detriment of the people.

Despite these statistics and our bottom-dwelling history, Mississippi’s governor Phil Bryant, with the backing of a majority conservative legislature, rejected the Affordable Care Act (ACA) and Medicare Expansion. The result is that since ACA began, Mississippi is one of the rare states where the amount of uninsured citizens has actually increased.

Welcome to the Bible belt.

Is it mere coincidence that Natchez, Mississippi was the site of Forks in the Road, the second largest slave trading post in the country, second only to the Port of New Orleans?

Jackson, Mississippi, a city of roughly 170,000 people, with a more than 80% African American population, has no African American producing theatre, or dance company, or consistent presenting entity in those disciplines. Private, state, and federal support for the arts is anemic. In 2014, there were no NEA awards in the entire state.

Despite these dire statistics, Mississippi continues to have one of the most vibrant artist incubation programs in the country. See, without question, the Black Church was the single most important institution during the Civil Rights era. Churches were a sanctuary, a safe space, and provided the cultural fabric for the movement. Today, the Black Church is still the most important cultural institution in the South. No other institution rivals the investment of the Church in the cultivation and nurturing of young African American artists. It is the most important non-profit arts infrastructure in our region.

I volunteered to host the National Theater Project cohort meeting because I want to see these critical dialogues happening in my community. I want to shift the conversation from one of isolation to one grounded in context by shifting the environment, with the intent to provide a glimpse of art from a slightly different cultural perspective.

In this field of art and culture it’s easy to forget that within the United States’ borders we are multiple countries. When we don’t see stories from multiple communities on our stages or in our public spaces, then it becomes easier to forget that all the world doesn’t think and look the same.

What I have come to understand is that hard work and talent are not enough to thrive in this field. There is still the issue of access, which by and large is still an issue deeply connected to white privilege and systems of oppression.

Access determines what stories get told, who gets to tell them, and where they are being told, which also determines who will get to hear them. All of this affects public perception and ultimately determines public policy. This is why cultural equity is so critically important. This is why our work is so important. Through our work we create the environment for positive social change to take root in the most important place: in each person.

I wanted to have this conversation in Mississippi because I think it is critical for us to begin to connect the lack of diversity in our cultural spaces and the lack of strong, multi-generational, diverse institutions with a history of inequity. It is not a result of less than excellent talent or inferior intelligence, it is the long-term impact of red lining and sharecropper education; it is the residual effect of police profiling and environmental racism.

I wanted to have this conversation in Mississippi because I think it is critical for us to begin to connect the lack of diversity in our cultural spaces and the lack of strong, multi-generational, diverse institutions with a history of inequity.

This is not an issue that can be fixed with a grant program or a new funding initiative. It cannot be solved with a few discipline-specific conversations on diversity. It can only be solved when a critical mass of our sector feels that this issue is important enough to shift our missions.

We shouldn’t still be trying to convince our peers that there are problems; it detracts from our ability to strategize solutions to fix them. This work requires us to take a critical look at our sector and understand our role in changing an ecosystem. There is no way to separate the past from the present or the future. It is a continuum. We decide tomorrow by how we respond to the challenges of today.

Our work in the arts sector is on the frontline of the imagination. Whether we like it or not, we have chosen to make a career in a field that is potentially the most powerful medium of transformation. We possess the power to dream and manifest change through our work as tradition bearers and culture shapers. Let’s take this moment as a challenge to live a better history.

Truly understand! I was the associate artistic director at Alabama Shakespear Festival for three years and my story can relate to your Mississippi journey to my journey in Montgomery. And of course I was the first African-American in that position...and nothing changed. Thanks to the Artistic Director at that time who worked diligently for a change, yet nothing changed.

"This is not an issue that can be fixed with a grant program or a new funding initiative. It cannot be solved with a few discipline-specific conversations on diversity. It can only be solved when a critical mass of our sector feels that this issue is important enough to shift our missions. " I am a fellow native Mississippian, and I completely agree with you. All the funding in the world won't solve the problems that exist. People have to get on board with, and truly believe in and WANT to change. Thank you for sharing this piece.

Way to go Carlton I'm so proud of you.