Recommended
Devising Our Future
HowlRound Theatre Commons
Most Discussed
Designing Collaboration: In Search of a Taxonomy of Collaborative Methods
Emily McConnell
Most Watched
The Gathering from the CrossCurrents Festival
Wednesday 4 May to Saturday 7 May 2022
Upcoming
Livestreaming a Conversation: #DeafWoke with John Autry II
Friday 20 May 2022
Essay by
Aaron
Henne
#JewPlay: What is the Future of Jewish Theatre?

Essay by
Aaron
Henne
#JewPlay: What is the future of Jewish theater in the United States? In this series, co-curators David Winitsky, Artistic Director of New York’s Jewish Plays Project and Guy Ben-Aharon, Producing Artistic Director of Boston’s Israeli Stage, asked Jewish theater practitioners from major regions of the country what Jewish theater means to them.
What makes theater Jewish?
This strikes me as just as complex a query as, “What makes a person Jewish?” or, for that matter, “What makes theater?”
To any of these questions, some might say that an answer can be found by looking at history and the ways in which the participants identify and operate are in response to, or derived from, that which came before.
Others might say that any conclusion must be connected to a belief system and how, with what practices and in what physical spaces, the involved party (or parties) engages with said beliefs.
Still others would offer that it is all about aligning with a specific community, regardless of the complex and contradictory ways the people within it behave.
All of these seem to be viable, yet incomplete, answers. So, I must seek out a more satisfactory response, to the initial question at the very least, by examining, through my own experiences, the places where history, belief systems, and community intersect:
theatre dybbuk, the company of which I am artistic director, creates multidisciplinary performances, utilizing an ensemble based development model, which explore and investigate Jewish myths, folklore, and history.
The development process, which is largely inspired by my work with various companies—a special thanks to Central Works in Berkeley—is based upon the idea that the company members will bring a wealth of worthwhile questions to the piece, and thus make it stronger. When we gather around a table, for three to twelve months, the value and meaning of the in-process script, and any supporting research, including liturgical commentary, documentary footage and excerpts from scholarly works, is debated. (One of my favorite texts is Raphael Patai’s The Hebrew Goddess, which takes a comprehensive look at the non-linear development of monotheism and its relationship to Goddess worship.) One of the more fascinating moments occurred when a consulting scholar pointed out that the treatment of certain themes in a script, salvation and redemption, was not necessarily Jewish in nature. As a writer who lives in a society with influences that are broad and varied, this, and many other similar instances, have challenged me to question my assumptions and to take an even closer look at the ways in which sometimes unexamined influences play out in the work.
These dramaturgical meetings coincide with a series of “on-our-feet” workshops, which include explorations of all sorts of movement, including much that is ritual based. These movements are abstracted – actors “breaking” different parts of their bodies through isolation, like the breaking of the matzah during the Passover Seder—and then utilized to serve the narrative. The “breaking” action, for example, was used to heighten a sequence where characters were traveling between two worlds, bereft of security.
Much like our Talmud, the collection of Rabbinical interpretations and argument which was developed in the earliest part of the Common Era, the entire process requires that a wide variety of voices come together to question the meaning and challenge the execution of the work. We treat everything as valuable but nothing as precious, turning every aspect inside out until we reach the center of the center.
Maybe such relentless investigation, filled with conflict and debate, is what makes theater Jewish. 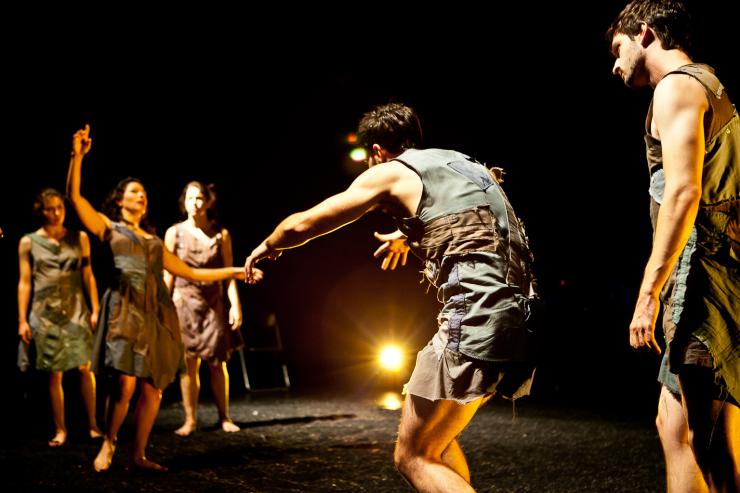 Everything theatre dybbuk presents is connected to themes and topics that are born from Judaism, culturally, historically, or spiritually. We are, however, not interested in having a conversation only with Jews. Our shows are meant to illuminate universal human experience through a Jewish lens. Our piece, “Cave...A Dance for Lilith,” investigated the evolution of world conflict by looking at Lilith folklore and Goddess mythology. This co-production with L.A. Contemporary Dance Company, which included live music and original composition, attracted those who were connected to Jewish history, those who just wanted to see some radical performance, and those with a deep interest in pre-monotheistic belief systems. The show, in both who it appealed to and in the different kinds of artists who worked on it, fulfilled, in whatever small and incomplete way, on the Jewish ideal of Tikkun Olam, repairing the world, by bringing together disparate pieces into one unified whole. 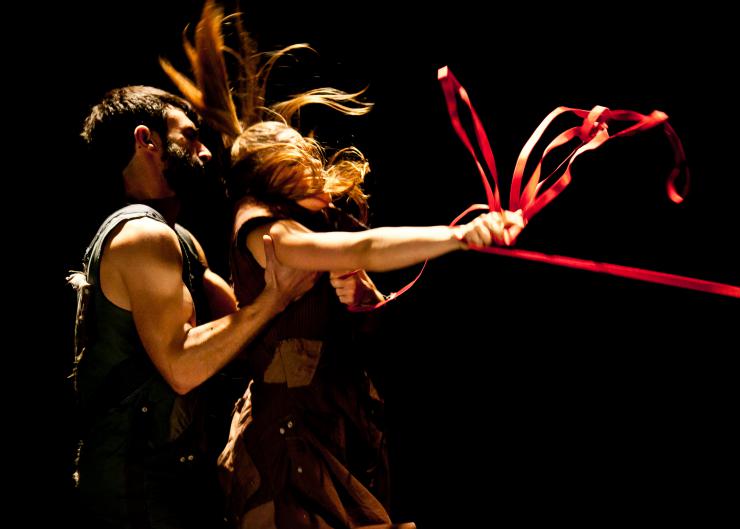 Maybe believing in the possibility of perfection, while knowing we will never fully achieve it, is what makes theater Jewish.

Over the past year, we have been privileged to be in partnership with a synagogue, Valley Beth Shalom (VBS), in Southern California and with a remarkable Rabbi, Ed Feinstein. In 2013, VBS commissioned us first to create a short piece, Vessels, to be premiered as part of a service. After that proved successful, Rabbi Feinstein asked that we develop and present a full-length work that would serve as the entire Selichot service, which occurs just prior to Rosh Hashanah, a time of great reflection and forgiveness.

With only three months to create, rehearse and premiere the work, neither a play nor a service but both, I felt pretty intimidated. Seven performers, Dramaturg Dylan Southard, Cantor Phil Baron, and Music Director Chris Hardin were collaborators and Rabbi Feinstein was our primary scholar and consultant. The task set before us demanded that certain pieces of liturgy be included and function within the experience and that congregants would have opportunities to pray.

Over the course of our meetings, I discovered that the piece would utilize the Seven Days of shiva (a mourning period) as a narrative structure. Each day would take a step from despair towards hope and the appropriate prayers would occur, based upon where in the emotional journey we were.

The rehearsal period proved challenging in that we, theater makers in an unfamiliar setting, had to keep asking these seemingly unusual questions:

“How will the congregation know its role and is it important that they do so?”

“What state do we wish to leave the congregation in?”

“Is there a call to action, an expectation that the congregation will behave in some specific way when they leave the shul, in response to our performance?”

I came to realize that these questions are just as pertinent in our more usual theatrical settings. With any production, we are “performing,” quite literally, a function, which is nothing less than to be a vessel for realization and transformation of some sort. The ways in which this occurs may differ depending on the situation, but the need to look outward at the congregation, the audience, is ever present.

Maybe turning our gaze so that it takes in the world is what makes theater Jewish.

Lastly, I serve as a board member for The Association for Jewish Theatre, an organization which functions as a catalyst for collaboration, discussion, and integration amongst makers of Jewish theater. In addition to the online means of engagement which the Association provides, we hold an annual conference at which playwrights, directors and producers from all over the world come together to share stories, swap ideas, and to ponder that very question posed at the beginning, “What makes theater Jewish?”

At this event, the answer lies in the very form that the gathering takes. All of these people, young and old, experienced and still green, with a shared desire for connection but a wide variety of opinions, come to learn together and to push each other forward by letting their own narratives and methods, their experiences, share the same space.

Aesthetics
California
Jewish Theatre
U.S. by State
Most Discussed
Designing Collaboration: In Search of a Taxonomy of Collaborative Methods
Emily McConnell
Most Watched
The Gathering from the CrossCurrents Festival
Wednesday 4 May to Saturday 7 May 2022
Upcoming
Livestreaming a Conversation: #DeafWoke with John Autry II
Friday 20 May 2022