Recommended
Devising Our Future
HowlRound Theatre Commons
Most Discussed
A Collective Call Against Critical Bias
Critical Mass
Most Watched
The Gathering from the CrossCurrents Festival
Wednesday 4 May to Saturday 7 May 2022
Upcoming
Livestreaming a Conversation: #DeafWoke with John Autry II
Friday 20 May 2022
Essay by
Bradley
Diuguid

Why Kermit the Frog is a Bad Producer

I grew up entranced by Jim Henson’s Muppets. Performing with wry but gentle humor, they pulled back the curtain to snicker at backstage life and deftly expressed all the joy, camaraderie, and frustration of working as an ensemble. Though televised, it embraced the dynamic liveness integral to puppetry, variety, and vaudeville as art forms. 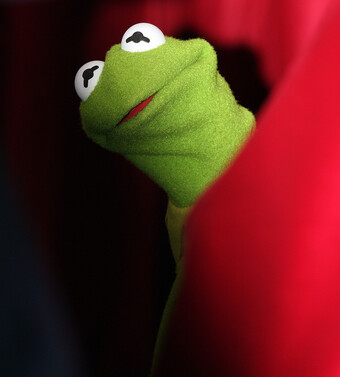 So now, looking back at the films as a young arts manager, I’m shocked to realize that Kermit the Frog—whom I love very, very much—is a pretty bad producer. Though effective in many ways, he’s largely unsuited for the entrepreneurial and managerial tasks for which he’s responsible. Moreover, after jotting down some of the reasons why, I saw an awful lot of myself in Kermit and his challenges, though on a different scale. I thought it worth exploring Kermit the Frog’s situation with a healthy sense of humor, and highlighting the lessons for our field.

All this hit me when I re-watched the most recently released film in the franchise, The Muppets (2011). Purists will point out that this movie employed a new creative set with controversial pushback from longtime Muppeteers, and arguably exists outside the “canon” that ended with Jim Henson’s death in 1990—an interesting debate that is outside the purview of this article. (And before anyone asks—no, I’m not affiliated with Disney.) We’ll primarily consider The Muppets as a case study for our purposes.

We begin with Walter, a fabricated American Muppet wonk, seeking out Kermit in hopes of raising ten million dollars to stem a hostile takeover of the desiccated Muppet Studios by oil baron Tex Richman. The Muppets, as a company and a brand, have declined in popularity after the gang disbanded, and Kermit putters around his Xanadu in Bel Air, enrobed in painful nostalgia. We’ll leave alone the fact that Kermit abandoned the company to hedge his personal wealth, because (a.) his exact wealth is unknown, and (b.) it’s unfair to expect him to sacrifice his entire savings on a business venture, especially because (c.) the company split on bad terms.

But did it really? Kermit exhibits a remarkably strong bond with his cast of friends, united by their mutual love of show business. Outside of the performers, though, Kermit clearly let his network stagnate. Think of all the celebrities, past and present, who deeply love the Muppets—many show up, apparently uninformed to the last minute, at the end during a climactic telethon fundraiser. If Kermit, also woefully out of touch with technology, was a better communicator and leveraged wealthy contacts more effectively, the process would’ve been much less stressful (though admittedly less dramatic). As it stands, it’s not clear whether he failed because old power structures have shifted (he tries to telephone President Carter), or if he’s avoiding productive follow-up because he feels powerless, intimidated, and overwhelmed.

All understandable, but which brings me to my next point—Kermit is a self-defeating nebbish in business matters. He’s always been put-upon, stressed, even introverted. That nerdiness is what makes him a great straight man, a sincere performer, and a deeply relatable personality. It certainly doesn’t preclude talent as a producer—many professionals I know fit this profile, especially the stressed part. But in The Muppets, Kermit shows very little of the grit that’s required for success in the face of adversity. Take for example his telethon pitch to the television networks. Somehow Kermit can still get in the door, but he’s just not a force in the room. He’s too easily discouraged when he’s told “no.” It’s especially puzzling because he’s so inspirational backstage, but needs his cast to lift him up outside the dressing room.

This is symptomatic of his worst fault of all—Kermit is consistently positioned as a leader without delegating responsibilities or accountability. It’s not clear whether this is by necessity or choice—whether Kermit’s head hangs heavy with the crown, as the only one even remotely willing to step up, or whether he distrusts his colleagues’ competence. Either way, for mediums as necessarily collaborative as television and live theater, Kermit is unnecessarily forced to work alone and hands-on for a staggering variety of tasks, from casting and emceeing to marketing and contract negotiation. Does he have trust issues? This structure is not only ineffective, but it also exacerbates his anxiety disorder.

This is symptomatic of his worst fault of all—Kermit is consistently positioned as a leader without delegating responsibilities or accountability.

While everything worked out well for our heroes by the end of the film, mostly due to extraordinary happenstance (Tex Richman decides to return the property to the Muppets after a convenient blow to the head during the finale), I’ve imagined some solutions that would directly address Kermit’s professional pitfalls and emotional wellbeing, and provide more long-term sustainability for the entire group.

To me, Kermit will always be a performer first. He was memorably discovered in The Muppet Movie (1979) playing “The Rainbow Connection” alone on his banjo, revived as an iconic anthem in The Muppets. He’s good, and he’s in his element. It would be a mistake and a disservice to take that away from him. Nor should he be shut out of leadership because he’s “just a performer.” He has a good eye for casting and booking, but knows how to rely on the strengths of his core ensemble of resident artists, from whom he commands enormous respect. Plus he’s tremendously recognizable and immediately associated with their brand.

In short, he’s a perfect fit for the new role of artistic director. And to help him focus on his strengths, Kermit should look to activate his colleagues’ stakes in the company to better utilize them for suitable administrative duties. In my vision, the Muppets begins to look more like a collaborative or devised theater company. Not only would they continue to generate sketches as a group of expert performers with a shared artistic vocabulary, but more members would take ownership of the company’s leadership, and thus be more proactive about its health.

Scooter, the sunny and energetic stage manager, should be promoted to producer. His people skills and systemic mindset make him a great fit—imagine the spreadsheets, the annual fundraising projections! Scooter will have a transition period to form relationships with important stakeholders, and thereafter continue to work closely with Kermit, the showrunner and face of the company.

Sam the Eagle is another obvious candidate for promotion. He doesn’t seem to enjoy performing, but I bet he’d make a dynamite major gifts officer. Put him in touch with oilman Tex Richman (I sense they have certain club memberships in common) and strike a deal to drill in an adjacent lot in exchange for a percentage, plus building renovation capital and solar panels for the theater. Great P.R. for Tex, and a strong step toward building a new board of directors for the Muppets. Miss Piggy would also make an incredible development director, if she could afford it adequate attention alongside her acting career.

They’ll probably want an outside hire to replace Scooter as stage manager, plus a consultant to maximize their fundraising efforts. They have more assets than they realize—Miss Piggy became a Vogue editor, Gonzo founded a successful manufacturing corporation, and Kermit is still based in Los Angeles. If they had drawn in their respective networks earlier in the game—perhaps at a gala party at Kermit’s Bel Air mansion with past Muppet Show hosts—they could have put some matching funds in the coffers, connected with a stronger national TV distributor, and boosted confidence early in the turnaround.

Thinking on the movie this deeply, besides being a fun (and perhaps over-analytical) exercise, inevitably made me reflect on my own career as an executive director, especially because I so closely identify with Kermit. What are my strengths and weaknesses as a leader? Am I effectively tapping into the resources around me? Am I fully utilizing the talents and interests of my colleagues, volunteers, and audiences—do I even know them as well as I should? How do I react and adapt in the face of challenges? Am I appropriately nurturing the creativity in my role? After all these years, the Muppets still have a lot to share about show business.

Careers
Economics
Organizational Models
Producing
Most Discussed
A Collective Call Against Critical Bias
Critical Mass
Most Watched
The Gathering from the CrossCurrents Festival
Wednesday 4 May to Saturday 7 May 2022
Upcoming
Livestreaming a Conversation: #DeafWoke with John Autry II
Friday 20 May 2022

Scooter is an excellent candidate for producer. Because his uncle owns the theater.

Thank you. A good laugh and all true.