All Too Often I Am Forced to Choose

A Conversation with Playwright Lydia Diamond 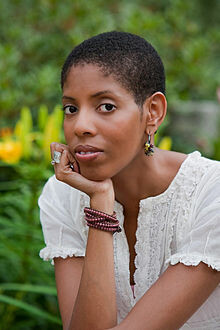 Lauren Gunderson: Do you think about gender parity when writing a new play?

Lydia Diamond: I don’t really. I take it for granted that I have a sort of built-in consciousness around gender, but I can’t say I’ve actually thought about it during the writing process. I said that, rather confessionally, to my husband and a girlfriend of mine this morning, and they responded that most of my plays contain very strong female protagonists. I’ve done that intentionally, but not actually under the moniker of gender parity.

Lauren: Are you conscious of being a woman when creating new work?

Lydia: I was really intrigued when approached to do this interview, because seldom have I been asked to talk about my work and gender. My “what I write about” sound byte includes gender: “I write about class, race, gender, and sexuality,” but I am only called upon to talk about race. It is also what I have most passionately aligned myself with. Curious. Politically, I find myself actually most readily identifying as a genderless African American. All too often I am forced to choose a piece of my marginalized (or celebrated) self. Around gender I haven’t so much claimed a space for myself—in practice maybe, but certainly not in a well-thought-through philosophical way. Interesting, and maybe a little tragic.

Lauren: Is there such a thing as genderless creativity?

Lydia: I can’t imagine, unless there are genderless writers. I’m sure that would spark a healthy debate, and may make me enemies. Certainly when I’m writing I still have a vagina. I wouldn’t wish not to…it’s a part of me, that, upon reflection, I value quite highly. (And for those who have already dismissed me as woefully apolitical, I do think my feminine identity is more complicated and nuanced than that.) It does seem worth pointing out that my vagina does not know how to use Microsoft Word or Final Draft…

Lauren: What do you think of the word “feminist”?

Lydia: Sadly, I don’t think people of my generation, and certainly the generations after (and I’m no spring chicken)—I don’t think we’ve been asked to think about it often enough. I love the word “feminist.” I have always readily identified as one, but when presented with a public arena in which to think critically about my relationship to that word, I became quite self-conscious. I suppose my definition of “feminist” would be, “for equality for women.” But surely it is more complicated than that. Pessimistically (because I’m a glass-half-empty gal, or womyn) I think it is because people of my mother’s generation fought so hard for equality, and to some degree earned it, and then my generation came along and dropped the baton. I suppose if my glass were half full I would say that in some ways my generation has been given the gift of not having to define ourselves as aggressively. But I don’t think I buy that. I think we have forgotten, and that the paradigm has become considerably more complicated.

I love the word “feminist.” I have always readily identified as one, but when presented with a public arena in which to think critically about my relationship to that word, I became quite self-conscious.

Lauren: What is something you would yell from the rooftops about women in theater, if you were a yell-from-rooftops kind of person?

Lydia: I feel I’ve seen women, women I’ve admired and thought of as role models, dismissed. Not given the credit for the import and impact of their careers. It makes me crazy.

Lauren: Do you sense gender bias in the theater?

Lydia: Sure. But bias is tricky. I suspect that not often do powerful men sit in dark, smoky rooms, conspiring to keep all of the pie to themselves and their brethren. I do think that we, women theater artists, and they, male theater artists, tend to think we’re all more progressive than we are, and so we don’t hold our industry to the same standards we vociferously proclaim should be met by other sectors. I can speak only for myself, but until recently, I would have been much more inclined to notice and critique gender discrimination in hiring practices at a temp job, or even in a faculty position, before criticizing a producing theater for the same transgressions.

Personally, of course I have experienced gender bias. But I haven’t walked through my career as aware of it as I have racial bias. Fortunately I have had a good run of it in the theater thus far. Access can insidiously distort one’s perception of reality, making it easier to get lazy and forget to notice. I try hard not to, but can’t imagine I am invulnerable to a certain level of privilege-born callousness. In truth, there’s no conjecturing to do. There is gender disparity, across all career paths. There are fewer female roles, fewer playwrights produced, fewer directors hired. It’s right there, in writing, and if you can’t find a study, do one yourself—I don’t think I over-state to say that it would fall out in a pretty predictable way.

Lauren: Is there any responsibility for women that belongs to other women in theater?

Lydia: I think all theater artists are responsible to one another, and since more than half of us are women, well, there it is. I have had doors opened for me by many women to whom I owe a great deal: Emily Mann, Martha Lavey, Molly Smith, Mara Isaacs, Alicia Keys, Nelle Nugent, Emilya Cachapero, Dr. Sandra Richards, Shirley Jo Finney, Kate Snodgrass, to name a few. Suffice to say, I know women have taken responsibility for me.

Lauren: How do you view the writer’s power to create opportunities for other female artists, or for women in general?

Lydia: If women playwrights can get productions, then I think we have the potential to have a huge impact. I’m watching my contemporaries, brilliant, vibrant women, creating roles that matter, and telling stories that matter, stories written from an unquestionably feminine place—that being a place of depth and humor and genius!

I attended the Commercial Theatre Institute's weekend intensive Producer training and was surprised that about half (give or take) were women. I expected it to be more skewed toward men. That can only mean good things for theatre in general if there are more women involved in the commercial side.

Thank you both. Very illuminating interview.

So true! Thanks for articulating that point.