The world may be dashed.
The world may be in pieces.
But to make…speak… do…
In the face of
Powerlessness
In the midst of
grief and mourning
Means that we still have faith
In the possibility of
humanity
But also in
A politics that could acknowledge
That we are all grieving and mourning

The quote above is from a galvanizing article written by Caridad Svich last year. In it, she encapsulates the feeling of juggling our desire to fight with the paralyzing knowledge that The Fight may not be enough to effect the change we dream of.

As a theatre activist, I found Caridad’s piece both motivating and gut-wrenching. I often wonder if any of the initiatives I’m running through Protest Plays Project are having an effect, but her piece reminds me that—even though I’m not creating world peace—the process of just fucking trying still matters.

I started Protest Plays Project because I wanted to create a space for socially-minded artists to meet. As a playwright, my first step was to reach out to other playwrights. What started as a gathering place soon became a place for planning action: I wanted to activate theatres and theatremakers to put all of these passionate scripts to use.

Now here we are, a little over a year later, and Protest Plays is no less ambitious. Our current goal? To put #TheatreActionGunControl plays in theatres across the nation in support of the #Enough walk-out and #MarchForOurLives march on DC and in cities around the country.

I’m hoping that theatres and theatremakers answer our call because the need is immediate, and the window is now.

'Our schools are unsafe. Our children and teachers are dying. We must make it our top priority to save these lives.'—March For Our Lives

I don’t remember where I was when I first heard about the Parkland shooting. I do remember feeling sick and angry… The tears came fast and hot and I wanted to close my ears and heart to all of it. But I couldn’t turn it off, or tune it out. It was real. It was tragic.

Mass-casualty gun violence has become a US habit. 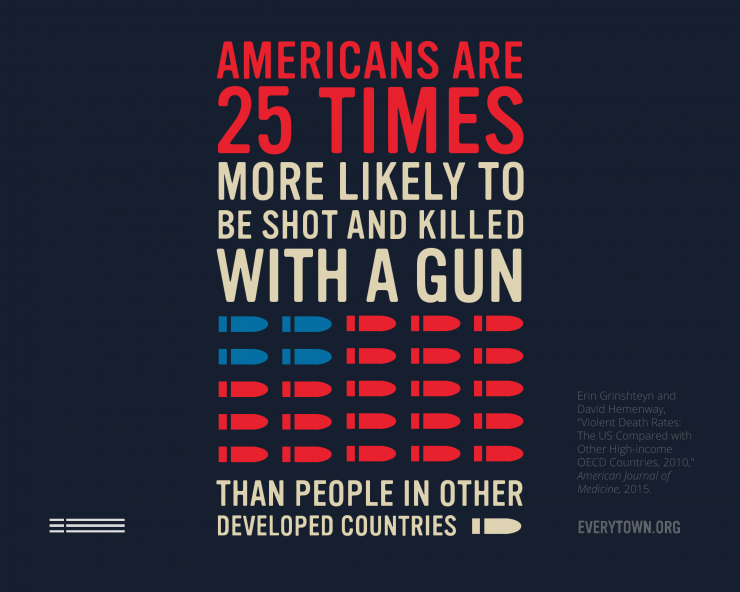 Protest Plays is hardly the first to try and organize theatrical action around gun control.

Caridad Svich assembled a collection of 24 Gun Control plays with Zac Kline and her company NoPassport in 2013. Her essays on HowlRound about this project are well worth the read.

The Every 28 Hours Plays, which solicited plays inspired by the statistic that a black person is killed by police kill every twenty-eight hours, deals with gun violence as it pertains to the Black Lives Matter movement. This nation-wide theatrical action began in 2014 and is still working towards enacting change.

I also want to mention Betsy Riot, a “neosuffragist punk patriot” collective, which has been employing theatrical protest actions in order to destroy gun culture since 2016. If you think protest plays are a bold concept, you haven’t met The Betsies.

And then there are the countless theatremakers who don’t have articles written about them, but who continue to write/devise plays about gun violence in the hopes of cultivating dialogue capable of spurring social change. 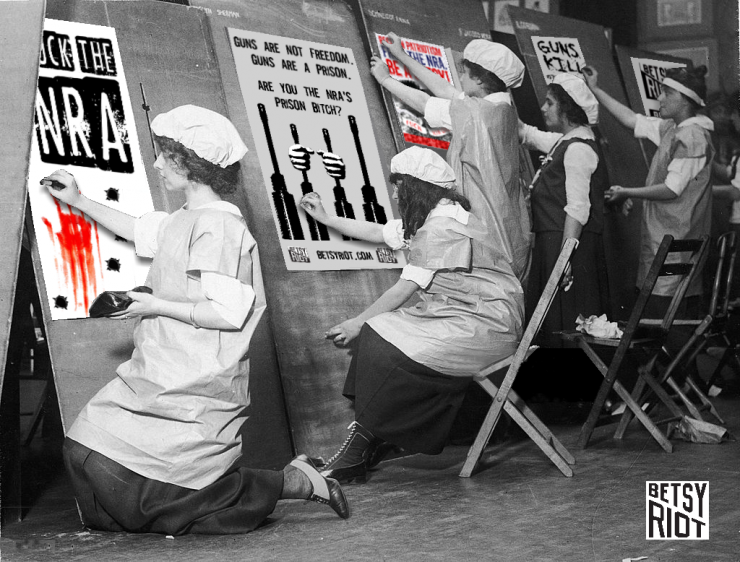 I wasn’t surprised to hear that many of the students currently inspiring our nation to take action are theatre students. In addition to the artists/groups listed above, I’ve personally worked with several playwrights and theatremakers this past year who have been putting everything they’ve got into creating opportunities for creative protest and action. Theatremakers are natural organizers and we aren’t afraid of speaking up or out.

The teenagers who survived the grotesque violence at Marjory Stoneman Douglas High School have somehow managed to wake up our gun-addicted nation. They’ve put their grief into civic action and have galvanized the nation. They lead with raw honesty and conviction. They are not afraid to stand up to Twitter trolls or trollish politicians. They are so very, very brave, and dedicated, and fierce.

We need to be fierce with them.

I’m not idealistic enough to believe one play (or fifty) will change humanity’s angrily drumming heart, but I am realistic enough to understand that a multi-pronged approach at cultivating social change is more effective than just one.

Through Protest Plays, I asked playwrights to “donate” plays about/inspired by gun violence to theatres for free, public readings in support of the #Enough Walk-out and #MarchForOurLives events. The response was incredible! Over forty playwrights sent us the New Play Exchange links to their plays. Caridad Svich and NoPassport reached out with their 24 Gun Control Plays and AFTER ORLANDO collections. Claudia Alick sent us the Every 28 Hours Plays. Playwright Rachael Carnes put out a call for playwrights to write about specific school shootings and has amassed a collection of twenty-one brand new short plays and monologues on this tragic subject. The collection is titled Playwrights Say No More School Shootings.

Simply put: We currently have over two hundred plays about/inspired by gun violence ready for theatres to put to use in supporting the #Enough and #MarchForOurlives civic actions. You can register your own #TheatreActionGunControl support event here.

I’m not idealistic enough to believe one play (or fifty) will change humanity’s angrily drumming heart, but I am realistic enough to understand that a multi-pronged approach at cultivating social change is more effective than just one.

And theatre can activate an audience. Aristotle knew it—it’s why we talk about catharsis in every theatre class ever. Whether the emotional and empathetic response of an audience is enough to get people marching…well, that’s part of what we want to find out.

#TheatreActionGunControl is an opportunity for theatres and theatremakers to put their energies into supporting these important civic waves. It’s the main reason Protest Plays exists—to encourage theatres to fulfill their roles as non-profits who serve their communities. Not just by providing helpings of laughter and opportunities to escape, but to provide forums for healthy public discourse on issues we are all now struggling to understand/fight/resolve as well.

And those who’ve been here before may feel like all the marching and walking and theatremaking in the name of gun control is akin to howling in the storm.

Maybe it always feels this way.

Maybe there are always activists and artists watching the world burn, afraid that if the flames get any higher...

So we try to put them out.

Even though we probably never will.

But maybe waging this unwinnable battle is the only thing preventing the flames from consuming us all.

The City of Brotherly Love Presents

Amelia Parenteau explores the value of bringing theatre and the humanities into the medical field through the collaboration between Philadelphia’s Lantern Theater Company and the Sidney Kimmel Medical College.

The Ground on Which We Stand

Why Do Women Climate More Than Men?
Chantal
Bilodeau
Essay

Why Do Women Climate More Than Men?

Chantal Bilodeau kicks off this week’s series on Theatre in the Age of Climate Change by suggesting that women in the arts may be our planet’s best bet for survival.

Thank you Tiffany for this important article. I for one believe in the potential for theatre to galvanize personal shifts in the minds and hearts of others. You never know how a person might be personally impacted and because of that shift not only their own response and possible involvement in issues of cultural importance, but also impact others through conversations they have with them stimulated by their own change. Several years ago I directed a production of PROOF. A friend of mine brought her teenage daughter who was to receive a scholarship for college based on her math skills. She decided to change her major because her 'friends' taunted her for being a math geek. After seeing the production my friend contacted me a week later to inform me that her daughter was so affected by the play she decided to resume her math major (the subject she loved) despite social pressure otherwise. Yes! Theatre can impact how one experiences themselves and others and thus affect how they move forward with their lives.

We never know, when our audience leaves the theatre, what they might be taking with them. Thank you for sharing your story!