Recommended
Devising Our Future
HowlRound Theatre Commons
Most Discussed
Instead of a Vision: Listening and Dialogue as the Work of a Theatre Director
Charlie Peters
Most Watched
The People’s Tribunal on Crimes of Aggression: Afghanistan Sessions
Thursday 9 September to Saturday 11 September 2021
Upcoming
Livestreaming Panel: What Does Anti-racist Producing Look Like?
Thursday 23 September 2021
Essay by
Kevin
Howard
Pedagogy Notebook

"Aquatic Thought" and Reflections on a Fornesian Playwriting Workshop

What can I say about the talented performance (and not theatre) major Kevin Howard’s piece that emerged from our one day Fornesian playwriting workshop? Wow is a great place to start. I invited Kevin to participate in this blog series because his solo piece, "Aquatic Thought" (see below) shines with the brilliance that Irene Fornés herself would have appreciated: poetic, thoughtful, imagistic and totally truthful.  When I asked Kevin why he switched from Dance and Theater to the department of Communications where Performance Studies is housed, his response may be familiar to actors who get caught up in racial casting: as a black young male, he just was not cast in enough roles. So, he decided to go solo. Take heed casting directors in college and university programs, and in the rest of the theatre world! But then again, maybe Hamilton already made that point….—Teresa Marrero, series curator

In my University of North Texas Spring 2016 Latino Theater topics class taught by Dr. Teresa Marrero, we successfully completed a one ninety-minute Fornesian workshop, something I had never heard of before. The exercise called for us to bring a blank sheet of paper. When we entered the classroom, there was a table covered in images found in magazines, books, newspapers, and online sources. Dr. Marrero instructed the class to walk around the table twice and observe the images. The second time we went around the table we were asked to pick an image that stood out to us. The image I selected was of someone leaping into a large body of water. I knew the person had not been in the water for at the time of the picture because of the massive amount of bubbles on impact. When we got back to our seats we were asked to closely observe the image we had chosen, then we were instructed to turn the image over and draw what we saw on the image onto the blank sheet of paper we brought to class; in complete silence the students began to draw.

The picture I drew was terrible. I tried to remember specific details from the drawing, but it did the drawing no justice. Our professor said it was OK whatever it looked like. After we completed the drawings, we moved onto the second half of the workshop where we were asked to do a free-writing exercise. We were instructed to look at the picture again and to further observe the image. The entire time I observed the image I wondered what drove this person to jump into a large body of water. I also tried to see this persons’ facial expression, but the face as completely blocked by bubbles.

In the free-writing part of the exercise, we were to turn the sheet of paper over to the back and write about what is going on the image. The writing could be any type of text: a script, a song, a short story, a poem. While performing the second half of the exercise we were not allowed to talk or deviate from our writing, but to vividly write any thoughts that came to our mind. Meanwhile, Dr. Marrero walked around the classroom and calmly uttered random words or phrases that we could use if we wanted. I wrote a poetic performance piece, "Aquatic Thought."

As I started writing "Aquatic Thought" I felt like I was the person in the image. I felt as if the entire world was looking at me from the outside and I had no identity because my face and half of my body were covered in bubbles; I could be virtually anyone. The concept of this piece invites and welcomes an endless number of narratives, emotions, and thoughts. I began to think of instances where my body has been in large bodies of water. We can all recall a time of being in the shower, in the tub, or under water, lost in thought. We think about life with minimal distractions. It’s just us: mind and body. The unconscious mind comes alive. When we are under water, noise is minimal, sound is unclear but present, we are unable to talk, there are hardly any distractions, time and body movements seem to slow down depending on water currents; our mind searches for acceptance; our thoughts become detailed and abundant; air is now considered a greater commodity, and water becomes a resistance.

This exercise put me under water and my thoughts were spilled onto the paper, detailed and vivid like poetry. The exercise took me into another world, a world where I could be anyone and still tell a story that wasn’t mine. I empathized, sympathized, and related to and with the figure in the image. It is difficult to fall into deep thought when one is on or above surface; but the deeper you begin to sink under the surface physically or mentally, the deeper you begin to think and the harder your mind begins to work without some sense of panic.

As a performance major, I took this opportunity to create an original piece, which I later performed in front of the class for a midterm project. The Fornesian exercise empowered and inspired me as an artist and really brought this piece to life. 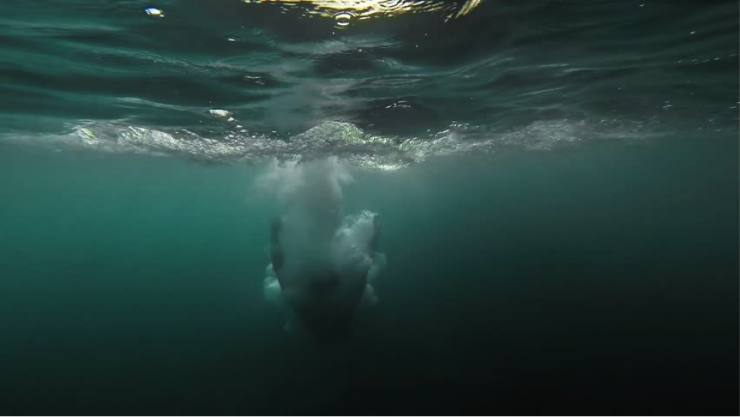 Life is like a box of-------
Hand me downs,
you learn to cope with what you get
So I search through this geometric metaphor
To only find:
Premature concealed emotions in torn gloves,
Knitted pairs of unfit parents,
and large shoes empty enough to carry echoes of aches and pains

These worlds are too small
These insecurities are too big
And this coat of pigment and pair of jeans
are covered in holes, the size of bullets

If I could just---
1….. 2….. 3…..
CLEARly we can’t go a day without getting into a fight
So yell.
I yell.
And this becomes a match to see who can give up faster.
It’s difficult raising kids by ourselves
Especially when we are kids are ourselves
And I told you, I’d never leave Hope
I’m nothing like my father
And she’s everything like her mother
And you’re still the only --
1….. 2….. 3….. CLEAR!

Life is like a box of----
Wires, chips, and batteries
Powering this complex piece of machinery
Ruled by analytics,
Numerically savvy,
I have buttons to push.
Only to be created and operated by some meticulous being
Tedious in nature,
Solving for why,
Maintaining constants,
Factoring variables,
And using expressions to complicate imaginary happiness
Now…. Breathe…. Count to 10
1……. 2…….. 3…….

CLEAR water lies beneath me in a four-sided figure..
I don’t know where I belong..
These right angles are showing me 6ft. depths
Only immortals have conquered

How did I get here?
I’m in need of air
Immediately on impact I hear and feel
The water rush into every space
I see bubbles only champagne glasses dream of
beat against my body

I hang… Someone Help
I think… I wish I can Borrow time
What’s done is done...

Water becomes warmer as I began to Chill
CLEAR

Latinx Theatre
Texas
Theatre Education, Pedagogy, and Training
U.S. by State
Most Discussed
Instead of a Vision: Listening and Dialogue as the Work of a Theatre Director
Charlie Peters
Most Watched
The People’s Tribunal on Crimes of Aggression: Afghanistan Sessions
Thursday 9 September to Saturday 11 September 2021
Upcoming
Livestreaming Panel: What Does Anti-racist Producing Look Like?
Thursday 23 September 2021

I also find the piece potent and poetic, and appreciate your sharing the process. Found it very interesting and valuable to experiment with in my own way. Also a fan of María Irene Fornés writing.

I really love this piece, Kevin! Thank you for sharing it and your process with us.