an interview with SK Kerastas and Lisa Evans

The following is an interview that took place on January 20, 2017, with SK Kerastas and Lisa Evans. These two artist/activists are leading the groundbreaking free public symposium #BreakingtheBinary which was first produced with support from California Shakespeare Theatre and Berkeley Repertory Theatre, and will take place again January 30th, 2017 at the American Repertory Theatre in Cambridge, MA. The event focuses on accessibility for trans* people working in the arts, and consists of a panel of trans-identified theatre workers, affinity break-out working groups (a trans spectrum and a cisgender working group), and a reception. Lisa, SK, and I sat down to discuss how #BreakingTheBinary came about, what barriers still exist for marginalized groups in theatre, and what some solutions to those barriers might be.—Regina V. Fields

Regina V. Fields: In your own words, what is Breaking The Binary?
Lisa Evans: When you look at many liberation movements, a lot of this work is still created on a heteronormative framework. Even in some of the work supporting trans, gender non-conforming, non-binary, genderqueer, two-spirit folks, a lot of the language is still gendered in a very binary way. Exploding the binary explores what it means to have space where everyone can show up in the ways that they are and feel supported, advocated for, and seen. #BreakingtheBinary is about looking at arts institutions (with a specific emphasis on theatrical institutions) and asking what it means to be creating radical strategies for inclusion. It’s looking beyond the traditional ways that we think of engagement, where you work with a trans* organization or have them come see the show, but about what type of access does it take for transgender, gender non-conforming, non binary, genderqueer, and two spirit folks to be able to fill up every role within an institution and be valued, and for institutions to understand the barriers of why there isn’t that representation right now.

SK Kerastas: In many cities there are amazing trans* POC identified artists in community, working in different capacities, who are separate from the arts institutions with the major funding—specifically regional theatres. What part of this event tries to do is bridge the gap between these artists and institutions. We’re trying to create pathways for trans* artists to do their work and get paid. Part of that is discussion, part of that is listening, part of that is seeing really strong work.

Exploding the binary explores what it means to have space where everyone can show up in the ways that they are and feel supported, advocated for, and seen. #BreakingtheBinary is about looking at arts institutions (with a specific emphasis on theatrical institutions) and asking what it means to be creating radical strategies for inclusion.

Regina: Across arts administrations, when striving for inclusive workspaces and audiences, the discussion often centers around not knowing how to make those connections with a marginalized community, or where to find staff and artists from those communities. You’ve both expressed a desire to bridge those gaps: how you would recommend people make these connections with folks of other perspectives besides their own?
Lisa:We cast the staged readings in the first #BreakingtheBinary largely through social media, so it was both of us knowing which trans* and queer groups online that we could engage with and post in, and not limiting ourselves to arts groups. We posted on every single Bay Area trans*- and queer-centered Facebook group and did personal reach-outs to friends, and we actually ended up having a lineup where the majority of the folks in the reading were not professional actors. You have to examine how you go out and look for people. How do you go through the process of determining both folks’ experience level and connection to the work?

SK: Yeah, a lot of it is about relationships: starting them if you don’t have them, sustaining long-term ones in mutually beneficial ways. Personal, experiential exchanges beyond marketing.

Regina: I want to talk about intersectionality. A lot of the people in leadership positions are white cis folks trying to make decisions regarding inclusivity, without taking class/gender/etc circumstances into account. As a queer POC who’s had to work their way through many unpaid internships, I know sometimes that’s not realistic. What are some of those barriers and how do they affect our field?
SK: I’ve noticed a recent push from many theatres to program work about and by trans people, which is awesome. Yay trans work! But most of the people getting those opportunities are white trans people. I would even argue that most are trans masculine-of-center. Which, again, has to do with systemic access in theatres and in society at large. And this is not to put those opportunities down. No, this is to notice where and how we are subconsciously privileging certain identities over others, so we can create avenues for folks who don’t already have this leg up to make art and work in theatre as well.

If we want to program diverse seasons that celebrate difference, the work has to go beyond representation. What ends up happening is that theatres try to check a box by putting on plays by a diverse set of artists, but there’s no one on staff who identifies that way, or at least not a quorum, which makes the decision-making not reflect the reality or identity of the folks they’re trying to represent. These folks need voices in our institutions in addition to being on our stages.

Regina: Where does that start? How can leaders take that and create action out of it?
Lisa:Something that we’ve been talking about as we’re building out these trainings is thinking about what non-exploitative partnership looks like. Have people been a part of the decision-making and art development process? It’s important to not just bring people in once you’re already rehearsing, but to actually think about what would it mean to have them provide resources, support, and opinions prior to the production’s start. Resourcing people for that time, and paying people for their emotional labor, is a big part of that.

Regina: We’ve been having this interview on Inauguration Day, and I think many felt 2016 was a rocky year in terms of how we’re making progress, and what progress will be maintained. What were some shining moments of 2016, and what advice do you think artist and activists should carry forward in 2017 to further this work?
Lisa: What’s been really exciting to me over the past couple of years has been seeing the ways artists are getting creative and challenging the medium and the mode of how we present the work. The Every 28 Hours plays, and the Defend Black Women altars built to black women, girls, and femmes: it was absolutely inspiring to see so many people take those projects and run with them across the country. Exploring how we take the practice of art outside of the institutions it’s been holed up in for the last thirty years and really contribute to liberation movements happening now is really exciting to me.

SK: I was at an action this morning where probably fifteen white, queer folks put their bodies on the line and got arrested in solidarity with a call from Black Lives Matter movements, and it’s just so inspiring to see people go there. They’re all going to be released, but I think many folks with privilege are ready to step up and to take action, but have no idea what to do. There are millions of people who are in a panic right now, looking for a place to plug in. The answer is to plug into the movements that have been doing this work for a very long time—there’s no reason to reinvent the wheel.

Regina: Where do we go from here? And what is a next step for people to get a training like this at their theatre?
SK:Take action. Begin. Get out of your comfort zone, be generous with your resources, and make sure there is a culture of difference at your decision-making table.

Lisa: Know what you don’t know. Seek out people and organizations that can support you in building a different perspective and analysis. If you’re in the Boston/Cambridge area, join us for #BreakingtheBinary on the 30th, and if you’re not, or tune in to the livestream on HowlRoundTV! You can also reach us at: 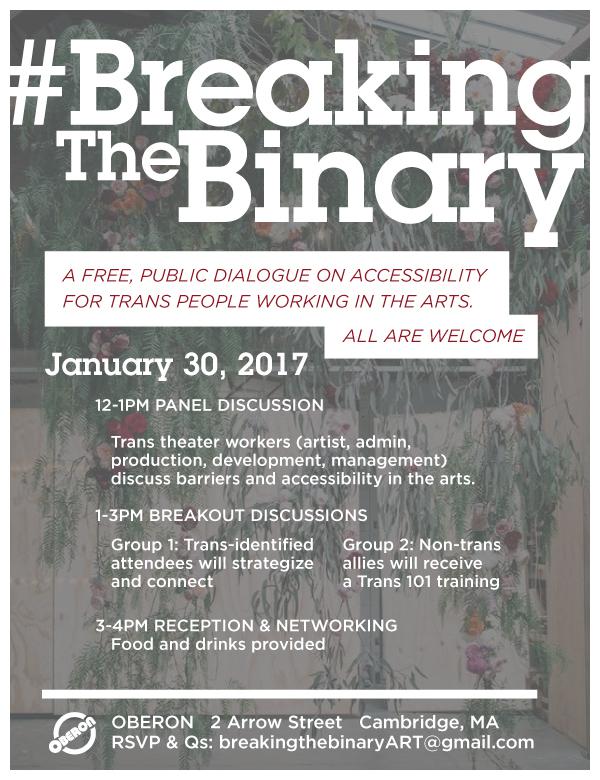 We Didn’t Have Any Role Models
Michaela
Goldhaber
Essay

Theatremaker Sloth Levine uses the casting conceit in Jaclyn Backhaus’s play Men On Boats as a jumping off point to explore gender diversity in casting.