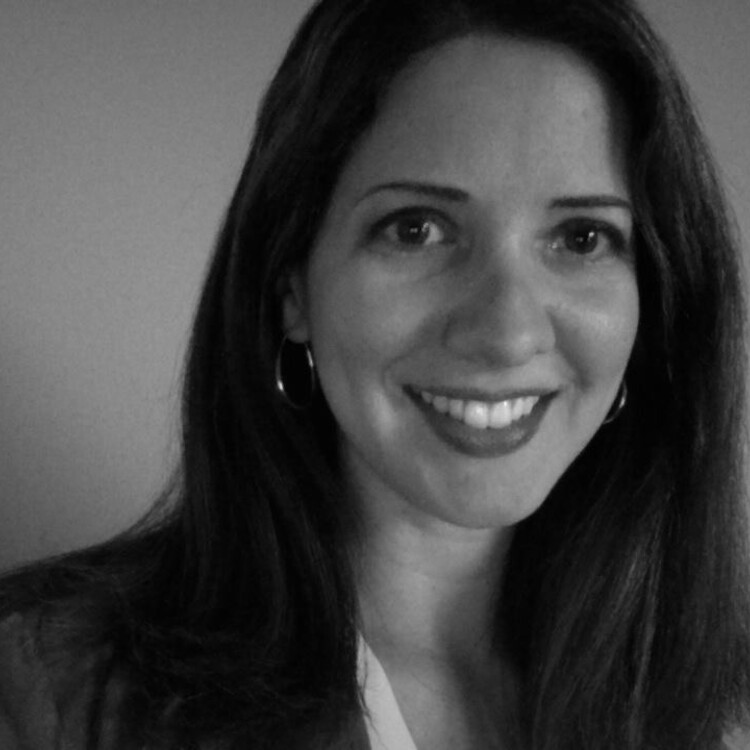 Cafecito (Coffee and chat) are interviews with comadres and compadres meant to shine a light on what small or large companies; independent artists or ensembles are doing around the country. Café Onda is an evolving publication. Sit back, take a sip, and enjoy our monthly Cafecito. This series focuses on the playwrights from the Latina/o Theatre Commons Carnaval of New Latina/o Work.

Carla Della Gatta: The breadth of your work as a theatre-maker is outstanding. You have worked as a playwright, producer, educator, literary associate, actor, and more. How do you decide which project is next?

Georgina Escobar: I know it probably sounds cliché and very Wachowski Siblings of me, but the projects really do choose me. I went to acting school in New York in 2000 and at that point, I had a teacher, Joanne Edelmann, who pushed me into the more existential part of my career. Without knowing it, she basically encouraged me to try writing more so than acting. Ever since, I have wondered about the field with an insatiable curiosity. I am obsessed with the unity of knowledge between the sciences and the humanities and that’s why I’ve thrown myself selflessly at every angle of theatremaking. As I “Alice” my way through the wonderland, I realize that whatever project is put in front of me next, is the one that I will tackle full heartedly. So, I believe fully that anything that’s put in front of me is there for a reason.

Carla: Your plays often include female characters with extraordinary and/or supernatural powers. What is the source of this inspiration, or why is it important to include them?

Georgina: Well for one I come from an extremely matriarchal family. I grew up seeing the women in my family as supernatural women. Growing up in a machismo community of cattle ranchers and mine owners and as Mexicans with Italian roots, it was still the women in the house that always raised the questions, sought the answers, and had the last word. I feel very blessed that the conversations around the table were about energies and auras, and about “that dream we had the other night and what it could mean.” In the midst of loss, my grandmother encouraged me to look for the multi-dimensionality of existence, perhaps so that I wouldn’t be swept away by grief. I have always had an overactive imagination and when I lost my mother, I had two choices: to go into the dark, somber reality, or seek solace in the creation of worlds and possibilities. I chose the latter. I think it’s important for little girls around the world to know that they can choose which women they want to become and which inner life they want to live.

I want to debunk old myths, turn them on their head, and ask questions. To me the point of exploring mitos is to ask “What if?” of the story.

Carla: Myth and folklore have figured prominently in your oeuvre, and in your most recent work, Sweep, you revisit the Adam and Eve story. What cuentos, or historical narratives do you want to attend to next?

Georgina: I’m very interested in zooësis. So animals are next. I think Aesop and Darwin are definitely next. Did you know that Darwin only wrote the phrase “survival of the fittest” twice, but mentions Love something like 100 times? Yet, what do we as a society hang on to? “Survival of the Fittest.” Hmmm…that’s not new. But I want to see that represented on stage. I want to debunk old myths, turn them on their head, and ask questions. To me the point of exploring mitos is to ask “What if?” of the story. Again, blame Joanne and Betsy Parrish for inculcating this at Stella Adler. Even if I didn’t make it out of there an actress, I took the Adler technique quite seriously. Then again, it’s only human to wonder.

Carla: What forums have had the most impact on shaping your plays and your writing process? Playwriting labs, staged readings, directing, or producing your own work?

Georgina: I like to do “Pop-Up” productions of my work because I think of the audience as Milla Jovovich from The Fifth Element! They are the missing link. I can’t really tell if something’s working if I don’t have the audience. For this reason, I like to get a group of actors and say, “OK, we have five rehearsals, two performances, and this budget—and go!” I’ve been very blessed with actors who trust me and skydive right into these huge worlds, trusting that I have a parachute for them. But to me, that’s the “play” in playwriting, right? To me the theatre is the laboratory of reason, so I’m never obsessed with the “final product.” As much as I like doing fast-and-furious mini-productions, I also want to see others take the piece and make it their own; I really am not possessive about interpretation. You never know what alchemical element another can add to your work that will turn it into literary gold. And I don’t mean money; I mean sunshine.

Carla: Do you have any rituals for your writing, such as the physical space you write in, or when you hit “go” on a project?

Georgina: Yes I do, but every play invokes a different sort of minor magic and ritual. I wrote The Circuz by starting at four AM every morning for a month and a half. However, I wrote The Ruin everywhere but at home—usually at very crowded spaces. Then, I mostly wrote Sweep in a hotel in Sleepy Hollow, NY. Yet, Wayfoot refuses to be written outside of the Eugene O’Neill Theater Center. It just varies. I think part of what excites me about writing is the relationships I create with the characters and the worlds I’m working on. They have presence, they have voices, and they tell me what their “rituals” are. I just follow.

Carla: What is the biggest change you have made in your writing process in the last ten years?

Georgina: Right now I am working on a new play, The Good Mexican, which is about the Maximilian Affair and specifically of the significant historical work that my ancestor Jesus Escobar y Armendariz did to reinstate the Mexican constitution amidst a French Invasion. It’s a piece of historical fiction that is high stakes because it’s about my family, but I’m also taking a lot of creative liberties. It’s different because I’ve never really written anything that starts to resemble real events. Of course, I’m at the early point of writing this and already I have puppetry, miniature theatre, and live-feeds written into it. I think that’s just my instinct when things get “too serious.” I learned recently from Henry Godinez that it’s important to just tell the story first. So that’s new too. I just went back and deleted all the gimmicks and I’m diving right into the story. So thank you, Henry. And thank you Lisa Portes and the LTC and Carnaval 2015 for being an invaluable part of my growth as a writer!

Love this interview! Dynamic questions and Georgina's responses make me feel at home in her head and heart. I look forward to reading more.

I agree! It's been great getting to know Georgina's work through Carnaval and this delicious cafecito. What a spectacular interview by Carla!

Thanks so much. It was a pleasure to have the opportunity to learn more about you and your work!