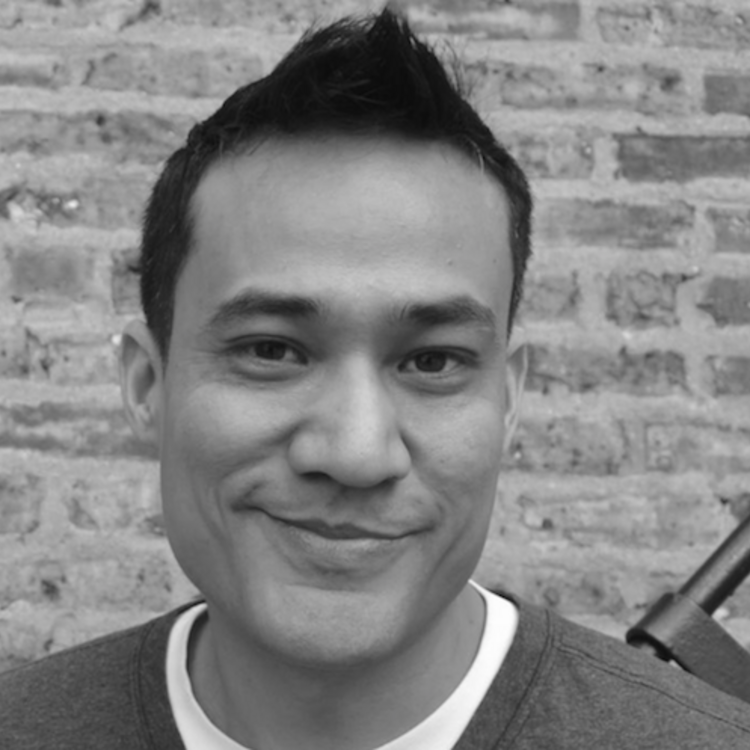 Marc David
Pinate
Getting Down with Barrio Stories

The Sacred Theatre of Barrio Stories

Director Marc David Pinate of Borderlands Theater brought together award-winning playwrights Elaine Romero, Virginia Grise, and Martín Zimmerman to write Barrio Stories and bring to life the oral histories of former residents of a demolished neighborhood in Tucson, Arizona. This three-part series documents the process from the perspectives of the playwrights, community outreach team, and director.

Months after the final performance of Barrio Stories, I continue to run into people who were affected by it. “Emilio,” a teen helping me build puppets and sets for an upcoming shadow theatre production (the latest Barrio Stories iteration), revealed that he attended Barrio Stories on a school field trip. Emilio was doing twenty-five hours of court mandated community service. I never ask the young people—often brown, soft-spoken, and courteous if not somewhat fragile— why they got assigned community service. It doesn’t matter. In the big picture, I know it’s not their fault. Two weeks and twenty hours into his commitment, this was the first time Emilio shared something with me that wasn’t an answer to a direct question—the first time he let his guard down, chuckled, and revealed things about himself of his own accord. I’m not surprised that our shared experience of Barrio Stories was what finally broke the ice. I am grateful, and a little bit more assured that this medicine—this remezcla of performance, ritual, spectacle, prayer, memory, pain, and beauty in partnership with community—does something that is particularly special and sacred.

Sacred theatre takes the spectator and performer out of the ordinary. It is more than presenting something unusual or novel, it is about radically opening up the receiver to seeing the world anew.

By sacred theatre I don’t mean the staging of bible stories or religious texts, though any subject can aspire to the sacred. Sacred theatre takes the spectator and performer out of the ordinary. It is more than presenting something unusual or novel, it is about radically opening up the receiver to seeing the world anew. As Franc Chamberlain put it in Sacred Theatre, sacred theatre is:

…opening into the fact that we are not only our everyday selves bounded (“cabined, cribb'd and confined”) by the Wittgensteinian limits of logic and language and the constructs of a psychosocial preservation-mentality. It is, most centrally and specifically, the moment at which all that flies out of the window, or perhaps becomes the window out of which we fly.

The sacred in theatre has a lot to do with affect and ritual. In their book The Affective Turn: Theorizing the Social, Patricia Clough and Jean O’Malley Halley indicate that affect is "linked to the self-feeling of being alive—that is, aliveness or vitality." Yet, Chris Healy argues in his essay that affect refers to a "certain intensity of sensual, emotional and embodied experience." Although feelings of affect can be minor, it is the strength of affect that James Thompson notes in his book is "more than the moment" which is emphasized in the literature. According to Hans Ulrich Gumbrecht in Production of Presence, affect also signals an important shift away from meaning/interpretation towards presence, a sense of being "in-the-world in a spatial and temporal way" that acknowledges "the immediate physical 'touch' of cultural objects."

For Barrio Stories, which I conceived and directed, I worked extensively with designers to create an affective force that would wash over audiences as soon as they arrived. For example, I positioned Virginia Grise’s memory fragment “Vamos a La Calle” inside of the east entrance, where the majority of spectators entered. I asked Costume Designer Avis Judd to go big with color and the style of the period. She created beautiful, deep purple 1960s style dresses for the two actors. The thirty-second scene played on an 8’x4’ riser lined with crumbling adobe walls about 18” high, conveying the excitement of a mother and daughter about to go shopping downtown, or la calle, as Mexican-Americans referred to the area. The scene looped every minute or so. Part of my inspiration for this section came from the entrance to the natural history museum in Chicago, where one’s eyes are treated to an arrestingly large T. rex skeleton as soon as you enter the museum. “Vamos a La Calle” ended in the same tableau depicted in Tucson sculptor Luis Mena’s Barrio Viejo Memorial statue of a mother and her child pointing to where the old barrio used to be.

If affect is doing its job, it makes capturing it in words extremely difficult. The confluence of these beautiful brown actresses in stunning dresses surrounded by the crumbling adobe walls, symbolic of the demolition of the old barrio was arresting. The sound design of “barrio street sounds” (guitars playing, mothers calling their children inside, and conversations in Spanish); the gorgeous blue sky and the perfect 81-degree weather, all ended with an iconic pose seeped in nostalgia and lament. The combined effect was something “more than the moment.” For Tucsonenses, the kaleidoscope of symbolism, memory, history, and aesthetics worked to inspire simultaneous feelings of joy, pain, nostalgia, recognition, validation…and a sublime, powerful, knowing “Mm hmm.”

The success of Barrio Stories was the creation of this liminal space—a space in between the present and the past; between memory and history, rejection and acceptance.

There were twelve more of these memory fragments, along with four one-act plays staged on three large “main stages.” Each stage utilized the same attention to detail and well-rounded sensory input; thus, each creating its own special moment. The Tucson Convention Center was deconstructed and reassembled in a way that brought the past into the present and re-appropriated the way space was used, including adobe walls, large paper flowers, Mexican tile work, chile roasters, comals (cast iron griddles used for making tortillas), and the sounds of accordions and guitars, children playing, and viejitos (elders) telling stories. Large elevated planters and concrete slabs became performance stages. Empty fountains, years since water flowed in them, were transformed into altars, railroad tracks, and Chinese grocery stores (which played a critical role in the barrio economy). A large open plaza became a huge dance floor where 100 plus youth spontaneously started a giant line dance.

In his seminal book From Ritual to Theatre, anthropologist Victor Turner points out that a ritual represents a process of social transformation. According to Turner, a true ritual occurs in a liminal space. Liminality represents a special kind of “in-betweeness” where the rules and other "schemata" that order and give sense to everyday life no longer apply. Creating a liminal space necessitates some kind of separation procedure that breaks you from the quotidian. I came up with the idea of going through a kind of intake booth, where attendees would receive a map and brief orientation of how to experience the event, along with opportunities to sign up on the Borderlands mailing list, or make a donation. This processing worked to build anticipation for people. The map, which was modeled after the kind of maps you get at amusement parks, signaled that you were going into a world/experience so different that you needed a map to navigate it.

The success of Barrio Stories was the creation of this liminal space—a space in between the present and the past; between memory and history, rejection and acceptance. Audiences found themselves between the modernist brutalism of the Tucson Convention Center’s architecture with its towering slabs of concrete which often stand desolate and the soft curves of short, adobe homes lined with flowerbeds and the sounds of the neighborhood with its familiar smells of burning eucalyptus leaves and fresh tortillas.

Barrio Stories was successful on many levels, but for myself, the cleansing and healing medicine we conjured was indeed a transformative sacred act. As a ritual event, space and time were transformed, suspended and shifted in a lasting way that altered how some people, including the TCC staff, viewed the space and its future possibilities as a site for community building, rather than a monument to displacement.

Thank you for your comment, Brenna. While I am sorry your family suffered so much pain.

Milta
Ortiz
Thoughts from the curator

A series discussing the collaborative and creative process of Barrio Stories.

I cried the whole time I watched this. It was the first time I truly understood what happened to my family and our culture. I went and bought the booked and learned the true history of our story. My family suffers and for so long that suffering didn't have rhyme or reason. I now understand so much more. I am angry for what we have lost, angry for how it was taken but grateful to understand. Thank you.

Thank you for your comment, Brenna. While I am sorry your family suffered so much pain. I am glad this event helped you understand your family history better, and I hope, will lead to some healing.