In August 2016, a group of Twitter users from different countries started using a new hashtag designed to bring more attention to women-identified playwrights. Modeled on the successful “#52FilmsbyWomen” social media campaign created by Women in Film (which has had as many as 10,000 participants already), each participant in #52playsbywomen volunteered to see or read one of these plays each week for a year (readings, musicals, adaptations, and short plays included), and then to tweet about it.

As someone who cares about parity in theatre, I know that raising awareness in inventive ways often yields new results.

I created this Call to Action after finishing the #52filmsbywomen initiative in 2016, and realizing how much it had enriched my life. As someone who cares about parity in theatre, I know that raising awareness in inventive ways often yields new results. Guidelines for the Call to Action, along with a list of fifty classic plays by women online accessible for free, were provided. Many participants were already signed up for the New Play Exchange, and opted to read plays there. The initiative operates on “the honor system,” with each participant responsible for self-tracking. Some responders choose to attach a program or play cover photo with their tweets.

This theatre Call to Action was given a real boost around January 2017, when the Women Arts blog generously published a New Year’s Resolution notice about it. More people joined and contributed. As 2017 came to a close, I gathered feedback from some of the active participants to reflect on the success of the project. Has it worked (or not)? How can this initiative be improved? Was it like a virtual book club for theatre lovers, or was it something more?

By the first week of November 2017, over three hundred and fifty women playwrights had been mentioned in the initiative, and over three hundred different plays listed. Active users of the #52playsbywomen hashtag have ranged from five to twenty-five weekly, and live in Canada, Finland, South Africa, the UK, and the US. In a poll online and in interviews, participants expressed strong ideas about the initiative’s purpose.

Shaun Leisher, the founder of The Punk Theatre of the Lehigh Valley, defines the mission as “to raise awareness about the gender disparity in theatre and promote the work of brilliant women in the field.” For Mildred Lewis, a playwright, and member of the Humanitas’ PLAY LA workshop, the purpose goes further: “To get audiences for those playwrights. To start a dialogue conversation about their work.”

Anna Andes, a theatre professor at Susquehanna University and a director, felt part of it worked but had hoped that deeper details could be shared: “I wish participants had been more proactive about promoting or educating in their tweets.” 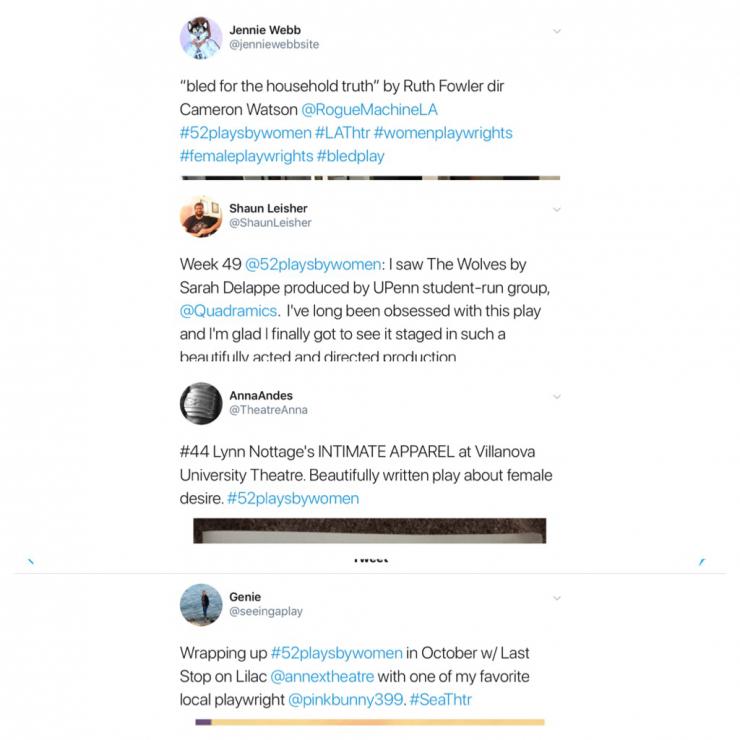 Many found it challenging to fit a play a week by a woman playwright into their lives. In November 2016, the UK-based feminist “17 Percent Blog” published a supportive post explaining why they had to bow out. Genie Sheth, a theatre enthusiast in the Puget Sound (Washington) area who aims to watch one hundred plays a year, took fourteen months to complete the initiative. During that time period, and in order to meet the fifty-two play total for this initiative, Sheth found she saw about 60 percent shows by men.

The initiative relied on self-regulation, and several users expressed regret on Twitter over falling behind the weekly target. Others, including Paula Cizmar, a playwright, librettist, and theatre professor at the University of Southern California, finished on their own: “I truly wanted to check in every week—but I would frequently get swamped with work.”

Pat Morin, a San Francisco-area therapist, writer, and the Co-Chair of the I.C.W.P. 50/50 Applause Awards, loves the initiative’s purpose, but admitted: “I did not read/view fifty-two plays. I think the number is too much to expect—a play a week? I couldn’t do it.” Hanna Åkerfelt, a playwright, writer, and translator in Finland, did not tweet each week, either, opting instead to use the hashtag whenever she did see or read a play by a woman.

There were some surprises: The hashtag was co-opted for marketing by organizations and artists, even though the guidelines suggest not to do so. Jennie Webb, playwright and-founder of the LA Female Playwrights Initiative, noticed: “In a way it irked me that people used the hashtag for their own shows, but I suppose that's unavoidable.” As the “facilitator” of the hashtag from 2016-2017, I tried to walk a line, by occasionally retweeting some of the first announcements of specific projects, because I know how many theatres desperately want help with promoting women and trans playwrights. But I didn’t want this type of tweets to slow down the momentum of committed users with weekly listings.

For some, the unity of a virtual collective mission was unanticipated and worked well. Leisher “loved all the writers I got to discover through this initiative and being connected with a community on Twitter that was also going on this journey.” Lewis “found to my delight that many more of my students, followers and colleagues than I’d realized picked up on the campaign.”

So was it a success or failure? I’d say it’s had mixed results. Participants agree there are many ways this Call to Action could and should be improved. Some think a more formal “social media pledge” as a first tweet to kick off the campaign each season would be a good change, perhaps accompanied with a catchy graphic that could be retweeted by others. Nearly everyone feels the campaign should go bigger and wider, both geographically (some hope “worldwide”) and expand to more social media platforms. But one of our goals was to help artistic theatre decision-makers find new names and plays, and I don’t think we’ve achieved that. Another participant suggested that these tweets should be brought to the attention of all artistic directors, perhaps addressed directly to them. Another idea was that maybe everyone should agree to retweet other participants for maximum amplification. Others thought the initiative should be restructured and re-titled “#26playsbywomen.”

Thank you, Laura! I have loved this project from its inception. Striving to see/read #52playsbywomen has been exhilarating and challenging! Brava!

In 2019, instead of writing a comprehensive summary at the year's end, I'll share informal stats here every other month (near the 4th weekend) about the current #52playsbywomen initiative.

I invite everyone to post here about the initiative, and especially those who are 2019 participants.
Please note: you can join this initiative at any time of the year!

Subsequent 2019 stat check-ins will be in April, June, August, October and in mid-December, 2019.

April update of the hashtag count, approximate (Feb 22 - April 25):
1) Number of participants = 25.
2) Countries of participants = 4 (Canada, England, Finland, USA)
3) Number of plays by women discussed = 139.
(Most popular this session were: The Wolves by Sarah DeLappe, The Cake by by Bekah Brunstetter and The Thanksgiving Play by Larissa FastHorse).
4) Number of women playwrights discussed = 115
*Note: Some playwrights have had several of their plays discussed.
The next #52playsbywomen update will be at the end of August.

Number of Plays by Women Discussed on the Hashtag: 259.

Number of Women Playwrights Discussed on the Hashtag:  219.

Next tally/hashtag count: at the end of August 2019.

Current stats for #52playsbywomen, from April 27 - August 26 (approximate). During this 4 month period:

3) 214 plays by women playwrights were discussed at the #52playsbywomen hashtag.

4) 219 women playwrights were discussed at the hashtag.

The final stat count for the year will be listed here on December 15, 2019. in the meantime, find us on Twitter at #52playsbywomen.

3) 195 plays by women playwrights were discussed at the #52playsbywomen hashtag.

4) 180 women playwrights were discussed at the hashtag.

A banner year for the initiative! Many people finished it; a few went well over 52 plays! Check out #52playsbywomen or @52playsbywomen for more.

For my firt season for Made in Wales (Cardiff) in 1996 I did three plays by women - Little Sister by Sian Evans, Safar by Afshan Malik and The Sea That Blazed by Christine Watkins. Part of the problem is that the history gets lost..?

Thank you Laura! You've put so much into this very valuable project. I have already suggested to one person looking for plays by women that they peruse the twitter feed on the account. It's a mini library catalogue that we can all return to again and again. Perhaps that is it's wonderful legacy.

What an interesting idea about the hashtag as a mini library or catalogue. Thank you for your contributions, Anna. I've learned so much from you this year, and am eager to follow all that you do.

And kudos to HowRound for Encuentros and its ongoing commitment to diversity in so many dimensions.

The fact that #52playsbywomen has evolved into a dialogue, marketing engine and community speaks to its power. It is doing its work in the world. Now it is up to us. We have to teach, mentor, produce, write, design, perform, promote and dramaturg with its lessons in mind. Let's tweak it and make it better, but may we never lose sight of what is and has already accomplished.

Thank you so much for all your great ideas, Mildred, and for being a part of this initiative.

Alexis Frasz and Holly Sidford of Helicon Collaborative share their findings from the most recent assessment of the National Playwright Residency Program.