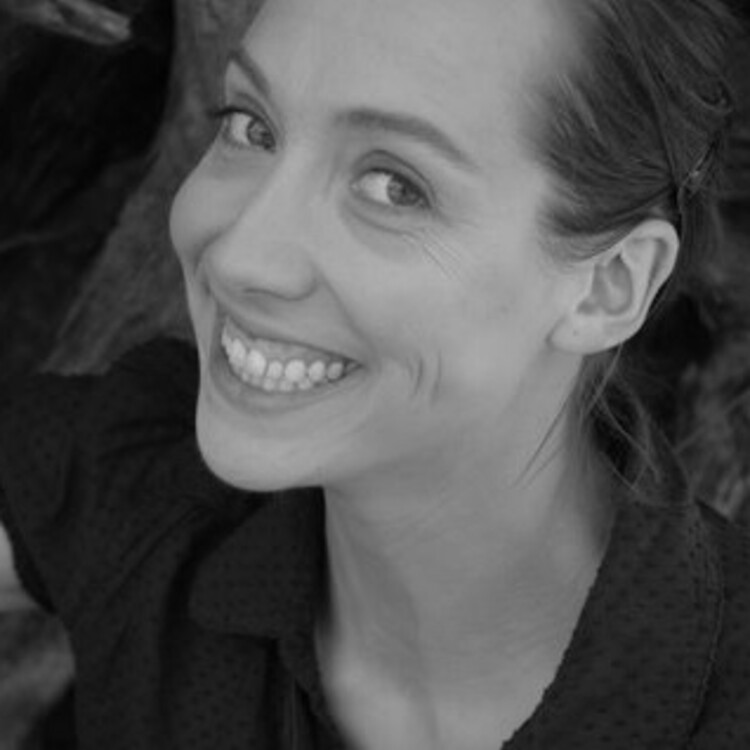 Our work at The Hinterlands in Detroit consists of three elements that are deeply entwined: creating original performances, engaging in ongoing performer training, and curating performative public events in and around our neighborhood. We work in units of time that are stretched out, requiring a perspective and commitment from collaborators that is long-term. To achieve the work of the company, it’s almost as though we work in three different ensembles running simultaneously, with some overlap of personnel.

One ensemble exists to create the performances. We do this through a research and physical training process in project phases of one or two years. Throughout the project phase, we sculpt several fully produced works of differing lengths in a multitude of contexts that provide design and performance material which culminates in a touring performance. From the conception of the work through the final performance, we strive to work with the same configuration of people—this means a one or two year commitment with subsequent touring. This ensemble shifts based on the area of research and needs of the performance. Our last piece, The Circuit, smashed the form of classic American vaudeville up against content related to contemporary subcultural dance, music, and performance. The ensemble for the work included artists who could provide unique perspective on the research: B-boy and Detroit jit dancer Haleem “Stringz” Rasul, noise artist Jon Brumit, tap dancer and uke aficionado Torri Ashford, as well as performers with a background in physical comedy. 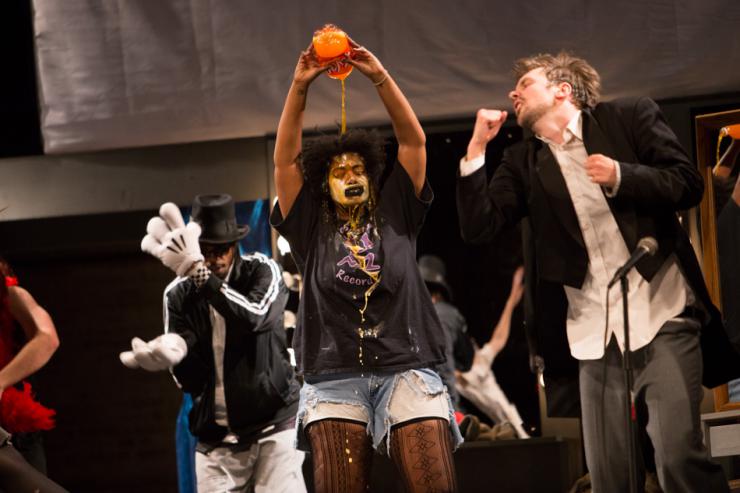 A second ensemble is our training ensemble. Almost daily, we engage in training, which includes physical and energetic explorations, both improvisational and form-based. The training may be used to create content for our work, but also to push the participants into new creative directions without an immediate connection to a specific performance. Individuals in our training ensemble may also be a part of the performance ensemble, or in a kind of internship or apprenticeship relationship with the company—or they may have their own use for the training in a discipline outside of theater. For example, we trained with filmmaker and anthropologist Julia Yezbick for half a year while she wore a camera. The relationship resulted in the short immersive documentary Into the Hinterlands. 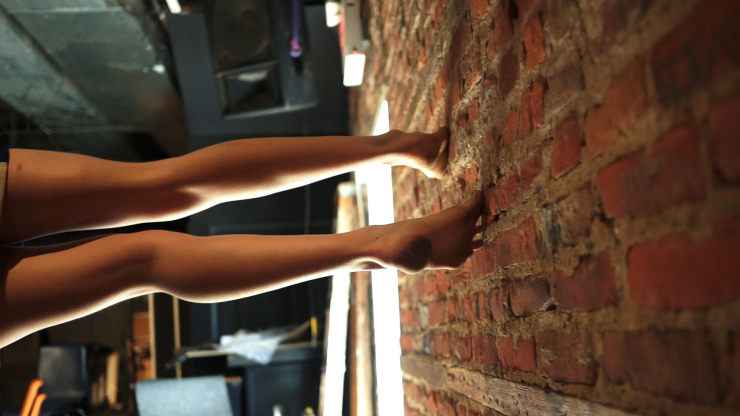 Caption: Liza Bielby in a still from Into the Hinterlands

Julia is not interested in performing herself, but she found great value in the training for her own practice.

The final ensemble within the company works in the neighborhood, managing curated events and workshops in our rehearsal/performance space, PLAY House, and in the neighborhood at large. This work is also long-term, requiring a long period of engagement from our co-administrators, as we try to sincerely respond to our neighbors and facilitate events that are truly grown from the community. Even more than our training ensemble, the work in the neighborhood allows for cross-disciplinary collaborations. Our closest collaborators in curating programming and neighborhood events is Power House Productions (PHP), an artist-run neighborhood stabilization organization run by architect and designer duo Gina Reichert and Mitch Cope. PHP has been operating in our neighborhood for five years, linking artists to vacant spaces, and helping residents (and resident-artists) to realize creative ideas that improve livability, safety, and communication in Detroit’s low-income Banglatown neighborhood. We found a place for our work within theirs: PHP designed and built PLAY House based on our proposal for a neighborhood-embedded rehearsal/performance space. They have co-written numerous grants with us for programming the venue, generously leveraging their resources in a way that fits both their organizational vision and ours. 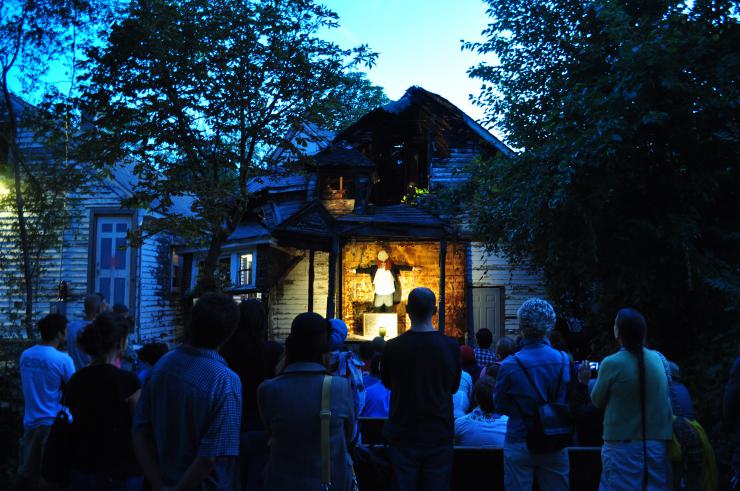 In the end, The Hinterlands is kind of like a band, with each performance and area of work being an album with a unique set of musicians. There’s cross-over: filmmaker Julia who trained with us also helped work on the renovation of our space; Haleem, who performed in The Circuit, still comes to monthly training sessions; Dave Sanders, who has performed in every piece we’ve created since we arrived in Detroit, is also a part of the training ensemble and has since moved into the neighborhood and helps manage PLAY House.

Detroit—our home base since 2010—has opened our minds to new models for collaboration and shifted our understanding of ensemble-based work. We’ve found most artists we come in contact with in the city aren’t bound to a single discipline—printmakers curate community food-based events, and trained painters build large-scale public installations. This inherent openness to working cross-disciplinarily has helped us to expand our ideas about the work of our company and the nature of our ensemble. Detroit values makers, and so it seems like everyone is making something, spearheading projects of grand scope, from independent galleries to monthly devised performance showcases to underground techno museums to a Zimbabwe cultural center run out of a living room. With everyone incredibly busy managing their own project, we’ve learned to manage our expectations of what someone can give to our project and what we can give to support someone else’s work. We’re building long-term relationships with like-minded folks in ensembles that run outside of the discipline of theater.

Our takeaway after five years is that working in ensemble is a dance in managing expectations. Working collectively carries with it the struggle of not just accepting, but desiring to work with someone for who they are and being happy to embrace the unknown. 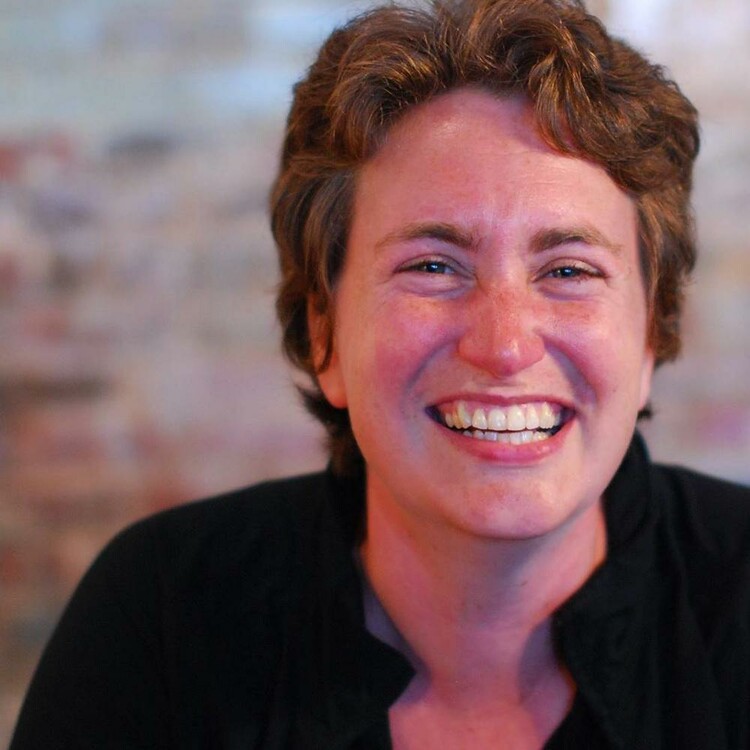 Meg
Taintor
Thoughts from the curator

This is an exciting format, and seems to me a smart choice for envisioning a new way of theater making. How do you choose your collaborators? Do they come to you with project proposals?

It depends - sometimes collaborators find us, mostly the people who come and get involved in training or neighborhood projects. For performances, it's all over the board. Sometimes we "court" someone whose work we like; sometimes we pull people in from the training group...it's always evolving. Thanks for your question!

Thanks, Liza. I'm going to be making a year-long road trip starting next summer, checking out various ways of doing theater around the country, and working with colleagues on projects. Do you ever accept volunteer theater professionals for week-long stints, stuff like that?

We haven't had that kind of situation come up before, but send us an email and let's chat!

Awesome article. I love how you describe your work in a band model, and the clarity of your framing of your three "arms" of work--and how they cross over. I'm working in an area that's got similar challenges and strengths, and we are thinking about how to make it work best, including long development periods and an understanding that most of our collaborators divide their time in a million different ways. We are interested in using local residents as well as trained artists, so new models become important. The band model helps frame it in a great way.

Can't wait to get more familiar with you guys and your work.