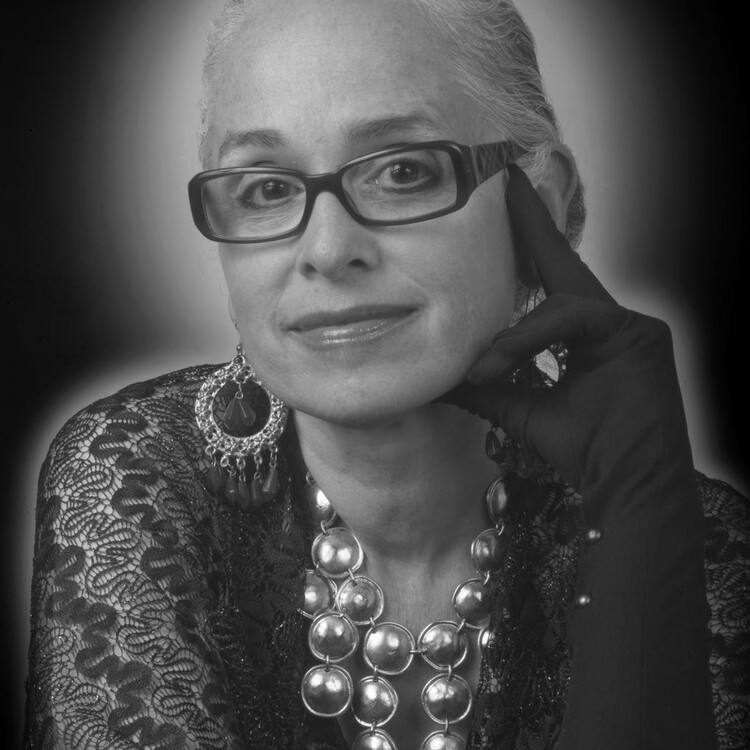 Cafecito (Coffee and chat) are interviews with comadres and compadres meant to shine a light on what small or large companies; independent artists or ensembles are doing around the country. Café Onda is an evolving publication. Sit back, take a sip, and enjoy our monthly Cafecito. This series focuses on the playwrights from the Latina/o Theatre Commons Carnaval of New Latina/o Work.

Trevor Boffone: Your piece Dancing in My Cockroach Killers was one of the most well-received productions at the LATC Encuentro last fall. How did your experience in Los Angeles inform your work when you returned to Massachusetts?

Magdalena Gómez: Thank you, Trevor. Encuentro was a diverse, multilingual, intergenerational collective embrace among people in all stages of their development as artists and thinkers. A roomful of people is always multilingual if we expand the concept of language to include nuances, regionalism, dialects, idiomatic intention, cultural and personal histories, inflections, gender, age, and slang. Many of my plays are bilingual, in Spanish and English. Encuentro affirmed my desire to write in more than one language, deepening my conviction that contextual placement both on the page and on the stage invite audiences to viscerally understand what they cannot understand linguistically. I want the audience to feel and think about my plays with their entire bodies. The audiences at Pregones and the Puerto Rican Traveling Theater (PRTT) in NYC were even more diverse, many of them non-Spanish speakers and many came back to see DIMCK a second and third time, bringing others with them—and of course, they fell in love with Pregones/PRTT.

Trevor: What can you tell me about the beginnings of Perfectamente Loca/Perfectly Insane and its journey to Carnaval?

Magdalena: Perfectamente Loca/Perfectly Insane has been writing itself in my body since early childhood. Director Daniel Jáquez has been cheering me on, organizing table readings at INTAR and doing some of the earlier dramaturgical work. Encuentro is where I learned about Carnaval. When I received the e-mail that my play had been selected and the follow-up call from Lisa Portes that left me crying and dancing all at once, I knew that I had not only found my tribe at Encuentro, but that they were also paying attention and would be greeting me at Carnaval.

The PL/PI story captures the collusion among colonialism, unquestioned traditions, and religion in creating cycles of familial violence. It deals with erased histories, social and personal horrors of abuse such as child trafficking, documents the rarely discussed pro-industrial slum of El Fanguito, and the plague of an oppressive and self-destructive perfectionism that has evolved from pleasing the Patrón in order to survive. In all commerce, including the arts, we still use the word patron. The word Loca is often ascribed to women who are unexpectedly strong and outspoken or in some way divergent from the expected gender and ethnic stereotypes. The interrogation of the etymology of words and their connotative morphing has always interested me.

Trevor: Perfectamente Loca is a deeply personal play. What have you learned about your mother and your relationship with her since beginning this process?

Magdalena: I have learned more about the circumstances that formed my mother than about our relationship. I found peace regarding our relationship decades ago. Having never seen a photographic image of my mother before she was thirty years old, I am grateful to Jack Delano and his stunning photos—the only ones I have found—that capture El Fanguito. His images brought me even more deeply into my mother’s vivid descriptions of living there. Thanks to his son, Pablo Delano, a wonderful documentary photographer in his own right, I have the option of using some of the images in production.

Trevor: How has Perfectamente Loca developed since you first conceived the piece? What challenges have you encountered?

Magdalena: The script has been informed by every person who has come in contact with the text. I am the mother and the active listeners/viewers are the tíos and tías who inform my childrearing. I am always looking and listening for the somatic engagement of the reader and audience. If there is a moment of shifting from one ass cheek to the other, then I know that’s a good place to re-visit and have the dramaturg on speed dial. The greatest challenge is time. The language and content of this play elicit a deep emotional response from the actors. This play is not a quick study. At Carnaval the actors, director, and dramaturg were deeply committed to the work. If we had to do it over, I would have insisted that we just present the first act, allowing these profoundly talented and engaged artists to delight more in the process with less focus on the product.

Trevor: Your work is highly poetic. How do you find the balance between poetry, storytelling, and performance?

Magdalena: I began my public work at age seventeen as a performance poet. My life has been and remains epic, my childhood an opera, and I am the daughter of two storytelling cultures: Boricuas y Gitanos. Add to that, I am a jazz poet who works with musicians. Poetry, storytelling, and performance—I’m a teaching artist—are part of my everyday experiences. I can’t even ride a subway without having some kind of fabulous adventure that involves all or one of these elements. Poetry, stories, and performance are everywhere, all the time; it is the pulse of interaction among all sentient beings, and if we’re paying attention, we can also be in relationship with the inanimate—but careful now, they’re fun, but no substitute for the animate.

A roomful of people is always multilingual if we expand the concept of language to include nuances, regionalism, dialects, idiomatic intention, cultural and personal histories, inflections, gender, age, and slang.

Trevor: Chicago-based Marcela Muñoz and Isaac Gómez were your director and production dramaturg respectively for the Carnaval. How did their work shape Perfectamente Loca?

Magdalena: These two artists use a whole lot more than the usual ten percent of brain power allotted the average human. In fact, I found quite a bit of that phenomenon at Carnaval and Encuentro. No, I’m not joking. They have inspired me to delve even more deeply into my mother’s story and to take even greater risks. The play we saw in rehearsal was different from the play that landed on the stage. The ferocity and intimacy, the crashing of that fourth wall, and the wildness of the three multi-talented actors—Paula Ramirez, Guadalis Del Carmen and Ana Santos—was unleashed in rehearsal like a turbulent storm. I now know how much further I can go with the text, music, dance, as well as with the unspoken moments. Marcela, Isaac, and the actors didn’t just re-shape the play, they re-shaped the playwright.

Trevor: What new perspectives will you bring to Perfectamente Loca after Carnaval?

Magdalena: PL/PI will be even more personal and naked than before. There will be more humor in the second and third acts, more playing with the S/M Burlesque elements and more spaces for the audience to breathe.

I agree with Magaly Cardona's comments regarding this being one of the best interviews with Magdalena I have ever read! Through this interview, Magdalena's responses are not only beautiful and "a performance in and of itself", as Trevor rightly acknowledges, but also begin to shed light on Magdalena's intellectual brilliance as a playwright and performance poet. In this interview, I value how Magdalena redefines and amplifies code-switching; how she describes the level of visceral engagement she seeks from actors and audience members alike; and how she models creative reciprocity, when she works with actors, who are embodying her work on stage.

As a multilingual Puerto Rican poet and independent scholar, I was fortunate enough to present a paper on her poetry, "'How I Became a Loud Puerto Rican': Magdalena Gómez's Transgressive, Womanist Performance Poetry of Resistance" at a Puerto Rican Studies Association Conference. This interview inspires me to re-dedicate time to edit that paper and to submit it for publication, mainly because academic scholarship on Magdalena Gómez as a playwright and as a poet is long overdue!

Muchísimas gracias, Trevor and Magdalena, for this timely interview. May this thought-provoking cafecito in the public eye inspire doctoral students and scholars alike in at least two academic fields: theater and poetry, to take advantage of writing and publishing articles, chapters, and dissertations/books about Magdalena! I know that I will do my part to spread the word and to encourage students and scholars alike to take advantage of the growing archive of Magdalena's work at the Dodd Research Center at the University of Connecticut, Storrs.

May the content of this interview with Magdalena Gómez inspire many more in-depth interviews, essays and long-overdue doctoral dissertations!

Muchísimas gracias, Jorge Huerta, for describing Magdalena Gómez, as I and many others experience her: "Glorious humility from one of our national treasures."

Beautifully said, Maria! I wholeheartedly agree "academic scholarship on Magdalena Gómez as a playwright and as a poet is long overdue!" and hope it will inspire others to "to take advantage of writing and publishing articles, chapters, and dissertations/books about Magdalena!"

What a rich and exciting interview. I especially love how Magdalena Gomez explodes the definition of multilingual to include all the different "Englishes" we speak and experience. She's an artist for the ages. Great piece!

This is one of the best interviews of Magdalena that I have read in quite some time. Trevor, your intuitive and insightful questions granted us an in-depth access into the inner workings of Magdalena's masterful mind. Which can only be achieved by someone who is a master in their own craft. I can only hope this will be the first of many porque...¡Este Cafecito fue hecho puro, fuerte y salio tan bien sabroso!

Excellent interview, Trevor and Magdalena. Your questions were informed by not only your love of theatre and performance but also by your own language(s). There are so many "quotable quotes" in Magdalena's responses that my head is spinning as I try to finish an article about all of the changes I have seen in Chicana/o/Latina/o theatre since 1965. (when I was 12...hee,hee) Further, Magdalena's generosity towards her exceptional (young) director and dramaturge. I love the recognition that "they din't just re-shaopethe play, they re-shaped the playwright." Glorious humility from one of our national treasures.

I'm glad you enjoyed our cafecito, @disqus_or8TyGd6Hz:disqus! Magdalena's beautiful responses are a performance in and of itself and speak to the many talents she possesses. We truly are lucky to have her!

If you enjoyed this, then you are in for a real treat with the remaining cafecitos with the Carnaval playwrights. I feel so lucky to have had a first glimpse of these before the world sees them. I can attest that these interviews represent the plurality of Latinidad in 2015 that we all witnessed in Chicago. Indeed, the future of the New American Theatre is in safe hands.