Wolves at Your Door

In 2013 I participated in Theatre Bay Area’s ATLAS program, a course that helps playwrights, actors, and directors hone career skills. As a playwright, I took the course to figure out how my work could reach a wider audience. During the training, I read an NEA report that said the top reasons audiences do not attend live theatre is the location of the venue and not having someone to go with. The problem is especially compounded for the elderly and disabled. The report focused on how underserved this population is, which suggests to me that a larger, new audience could be served if theatre came to their personal living rooms. ATLAS gave me the skills to develop a play for living rooms, market it, fund it, grow an audience for my future work, and connect me to directors. I hope this article serves as a map for others looking for new ways to bring their work to new audiences and develop their careers.

The Play
From the beginning, I knew the play had to be intimate. I envisioned actors standing a few feet from the audience and I wanted to utilize this closeness dramatically. Since my play could be performed in any home, I decided not to incorporate sets, special lighting, or complex staging. This meant that the action would take place in the audience’s imagination. Because the audience was in a sense captive, both the text and performance had to be engaging, versatile, and surprising.

I selected a play I’d been tinkering with called Wolves, which explores the themes of love and memory, and has a cast of two characters—a man and a boy. I needed to work out the play’s kinks before taking it to friends’ homes. So, I developed it over twelve weeks at Central Works’ writers group and came away with a leaner script. I cut much of the dialogue and relied on rhetorical devices to capture the audience’s attention instead. In my final draft, the protagonist begins a narrative and then alters it, makes bizarre assumptions and then mocks the audience for going along, employs innuendo, irony, rhetorical questions, commands, suggestions, and breaks expectations often in mid-thought. By playing with the spectator’s anxieties and defenses in this way, the play’s action literally happens to the audience sitting a few feet from the actor. 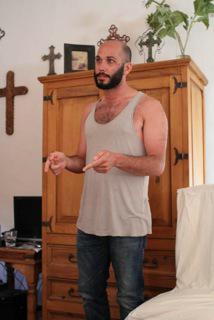 Director/Actors
I sent Wolves to competitions and theatres, but when no one bit, my ATLAS training helped me be more proactive and I followed up with the theatres that rejected me. Since a couple dozen people had actually read my play before turning me down, I contacted some directors and asked if they were interested in doing living room readings of my play. Rem Myers of Cutting Ball Theater not only said “yes,” but also talked about how the play resonated with him. I paired him with Wiley Naman Strasser, an actor whose work I had been following—I thought he had the kind of agile mind Wolves needed. Finally, I added child actor Campbell Zeigler, whose work I also admired.

I decided our initial commitment would be small and I work shopped the play with Wiley Then, we rehearsed eight hours with Rem for our first reading, which allowed us to both gauge how we worked together and the audience’s interest in the play. If we didn’t gel or the play read poorly, we would have spent only a few resources. Yet, the audience enjoyed and understood the play, and we actually liked working together; thus, we scheduled another round of rehearsals, and a reading with a new audience. We were enthusiastic about the experience and by the end of 2014, we decided to try to do an off-book, professional run.

The Production
To fund thirty hours of rehearsal and a dozen performances, I wrote a Zellerbach Grant to cover artists’ stipends. Its success was greatly aided by video taken at our readings. Early this year, we received the grant and began rehearsing in June. At this time, I contacted people who had seen the initial readings and asked if any were willing to invite ten of their friends to their home to watch a full production. Many agreed, so I selected hosts of difference ages, living in different parts of the San Francisco Bay Area. I hoped to learn how diverse audiences reacted to the performance.

I wanted to make things easy as possible for my generous hosts. So, I prepared promotional materials for them to email their guests and post on social media. I also provided refreshments for the performances. Finally, I asked permission to invite artistic staff from local theatres to the venues. I hoped Wolves could serve as a calling card—a way of starting a conversation with artistic directors and others who make decisions about commissions at local theatres. 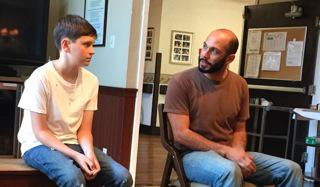 Success!
As I’m writing this blog post, we’ve had two previews and have scheduled a performance run for twelve shows, each in a completely different place for people who do not or are unable to attend theatre. Along the way, we brought Wolves to two senior living facilities and a convalescent hospital. So far, the audiences have been happy to come to the home of someone they know and they’ve settled easily into the story. The icing on the cake is that by working on Wolves I was introduced to an artistic director who has engaged me to write for his theatre.

I read an NEA report that said the top reasons audiences do not attend live theatre is the location of the venue and not having someone to go with. The problem is especially compounded for the elderly and disabled. 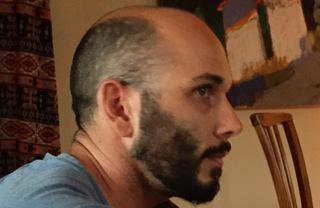 Strasser in a living room in Berkeley, CA on August 14, 2015. Photo courtesy of Paul Heller.

I’m looking forward to building on the success of Wolves and developing a wider range of in-home theatre for people who don’t go out to the theatre—maybe a bedroom farce.

Paul, congratulations on the success of this project. It was thrilling to see it in person a couple weeks ago. It's a great model for other playwrights looking to produce in nontraditional spaces.

Inspiring! Congratulations. Thank you for sharing your experience and giving us tips on how to produce in-home theater successfully, which I consider to be a valuable way to get one's work exposed as well as reaching new, often ignored audiences.