Nathan Louis Jackson is the Playwright-in-Residence at Kansas City Rep through the National Playwright Residency Program, funded by the Andrew W. Mellon Foundation. Find out more about his residency experience here, and learn about the impact of the program at large here.

Nathan Louis Jackson is the Playwright-in-Residence at Kansas City Rep through the National Playwright Residency Program, funded by the Andrew W. Mellon Foundation. Find out more about his residency experience here, and learn about the impact of the program at large here.

Nathan Louis Jackson is the playwright in residence at Kansas City Repertory Theatre (KC Rep) in Kansas City, Missouri as part of the Mellon Foundation’s Resident Playwright Program. Kyle Hatley has directed two of Nathan’s plays at the KC Rep (Broke-ology and When I Come to Die) and recently stepped down as associate artistic director to relocate to Chicago. The KC Rep has hired two new staff members: actor Jason Chanos to replace Kyle, and Marissa Wolf (former artistic director of Crowded Fire Theater in San Francisco) as a director of new works/artistic associate. Kyle will remain a leader in the residency with the title of director in residence, and he will direct Nathan’s upcoming new work Sticky Traps. I sat down with them to discuss their relationship and the state of the residency at its halfway point.

Mackenzie: How would you describe your relationship before the residency began?

Kyle: I read Broke-ology before the residency. It showed up in this packet of plays from an agency. I read it cover to cover and then immediately sent it to Eric Rosen, the artistic director and the senior staff at the Rep. Eric informed me that Nathan was from Kansas City, Kansas, and the play was being produced at the Lincoln Center Theater. It turned out that Nathan and I have a lot of friends in common—they taught me about Nathan before I even met him. We were both busy, but we would meet up and talk whenever we could, in New York or Kansas City. When I directed Broke-ology, it was important that he was involved in the casting and design process. It was one of my favorite things I have ever done.

Nathan: It was a great experience and it was the start of a strong friendship. After the play, we kept in touch and watched each other's careers grow.

Mackenzie: What were your expectations going into the residency?

Nathan: So many things were running through my head. My biggest expectation was being a daily part of a successful and vibrant creative community. I expected to influence the theater and for the theater to influence me. I was also looking forward to having the time and financial means that would allow me to focus more on my writing.

Kyle: One of the expectations I had was that his voice would influence our work in the artistic office, and also open our eyes to new perspectives. I think having a playwright in the office informs how we go about the process of creating new works and season planning. He’s out in the field, and he can introduce us to a lot of new playwrights we might not otherwise have seen and should be paying attention to. He has a very exciting perspective in terms of what theater can and should be. I also knew there were huge educational opportunities that came with the residency. He’s an astonishingly talented playwright that can talk to students in a real way, and connect to them on a human level.

Mackenzie: In what ways do you feel Nathan has been integrated into the staff at the KC Rep? How has your relationship developed?

Kyle: Nathan is so good about sitting down with anybody, whether it’s marketing, education, or season planning, and his proximity to the rest of the staff educates them about what it means to be a playwright, what the process is like—which can only help when you’re developing new work. One of the newest missions of this office is to start developing new work and to really be a home for emerging playwrights. Nathan has really helped us to get better at that.

Mackenzie: What has been the best part about having and being a playwright in residence at a major regional theater?

Kyle: I think it’s that he has such a passion for connecting with young people. He goes through our education programs, or just goes and visits schools himself. He feels such a responsibility to the community that it has deepened our mission at the KC Rep to do the same. His personal mission matches our organization’s civic mission, and he exemplifies the ideals of the Rep.

Nathan: The feeling of having a home. Normally a playwright goes from one theater to the next, never really being able to feel grounded. The best part of being a playwright in residency is being part of an artistic family.

Mackenzie: What would you say have been your biggest challenges?

Nathan: The most challenging would have to be finding the balance between writing and working. I want to have as much time as I can to write. If I'm not careful, I spend every free moment typing away at my laptop. But I know there's so many more ways to benefit the theater and the community. So I have to organize my time carefully.

Kyle: Nathan’s great, he’s game for everything. It’s just scheduling. We’re all so busy and we want to spend as much time in person as possible, but sometimes the schedules don’t align the way we’d all like.

Mackenzie: Do you have a favorite moment in the residency so far?

Nathan: There have been a lot. The opening of When I Come to Die. Going to the Humana Festival and seeing some very moving theater. But my favorite moments are just hanging out in the office and getting to know my new coworkers. 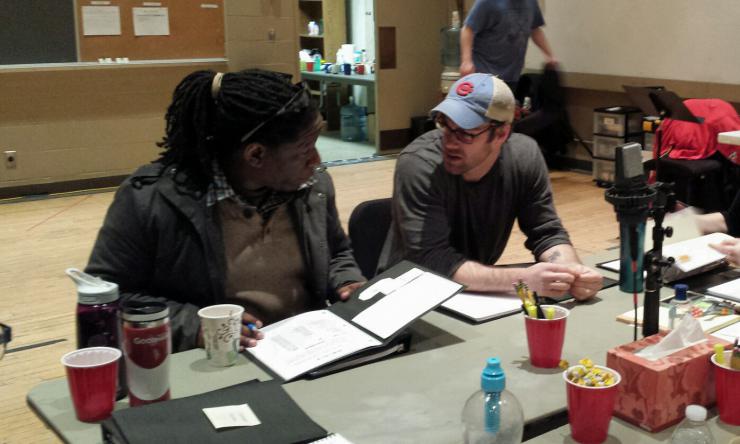 Kyle: Student matinee talkbacks with Nathan after When I Come to Die—that would have to be my favorite. Those kids just light up, and he lights up, too. It really is a moving experience to watch him connect with those kids.

Mackenzie: In what way, if any, has the residency changed your approach to your work?

Kyle: In working with any playwright on a new play, I’ve learned that communication is important, to the degree that the playwright is comfortable. It’s wonderful having Nathan in the office to be in on planning and artistic decisions, and he’s shown us what we need to change in order to be as accommodating as possible to the playwriting process. In some ways, I think Nathan has taught me to be a better director of new works.

Nathan: It has provided me with more stability, and stability has given me a routine. I've always had a problem getting into a solid routine when it comes to writing, but now I can schedule time to do my work and have a comfortable environment to do it. As my life becomes more organized, so will my writing.

Mackenzie: It seems you both—and the theater—have gained so much from this experience. What would you say to other theaters that might consider having a playwright in residence?

Nathan: Do it! We're still figuring out how I can serve the Rep and they can serve me, but I believe my being there has had a positive effect. A theater having the accessibility of a playwright is invaluable. Whether it is for season planning or new play development or just another helping hand, a playwright in a theater is a wonderful thing.

Kyle: I would say that writers are busy people, and it’s in our best interest to collaborate with their schedules and to be as upfront as possible with our expectations and deadlines. Things happen so fast, we go from project to project; the more organized you can be at the beginning, and the more communication you have, the more chance you have at success.

Mackenzie: What is the most important thing you’ve learned as a playwright in the first half of the residency?

Nathan: There is a lot of work that goes into running a theater. A lot! I have a greater appreciation for what the artistic and executive team does everyday.

Mackenzie: What are you most looking forward to accomplishing in the second half of the residency?

Nathan: Two things. Mindy McCrary, the KC Rep education director and I worked in the spring on setting up relationships with several schools in Kansas City. I'm looking forward to building on those relationships and setting up programs to help foster the creative voices of those young people. Also, I'm very excited about starting up "Bring to the Page," a monthly playwright slam that is open to the community. This will allow anyone who has a burning desire to say something an opportunity to speak.

Kyle: I’m looking forward to the first production of Sticky Traps and all subsequent productions of that play. He’s written a brilliant play, and I think people are going to want to do it all around the country. I’m so excited to be a part of the ground-zero event of this play. It’s always really cool to be close to an artist when they’ve written something great. I want to do anything in my power to help share that text with anyone and everyone. It has a huge future. I think it’s one of the best plays he’s written.

The Ground on Which We Stand