Sometimes a discussion with a panel of people telling another group about work they have done in the past can prove dismal and exhausting. I experienced an exception to this at the recent Encuentro 2014 at the Los Angeles Theatre Center. The creators of the new community theater piece El Largo Camino de Hoy from South Coast Repertory caught the eyes and ears of more than one hundred attendees. They pulled us in the same way they pulled in community participants of Santa Ana, California—participants that then invested in, created, developed, and performed El Largo Camino in their city. It wasn’t the only time that we danced and sang as a community at the Encuentro, but it was the only time we invested deep thought into how we support community members so that they, like us, feel the impulse and have the agency to dance and sing with everyone. 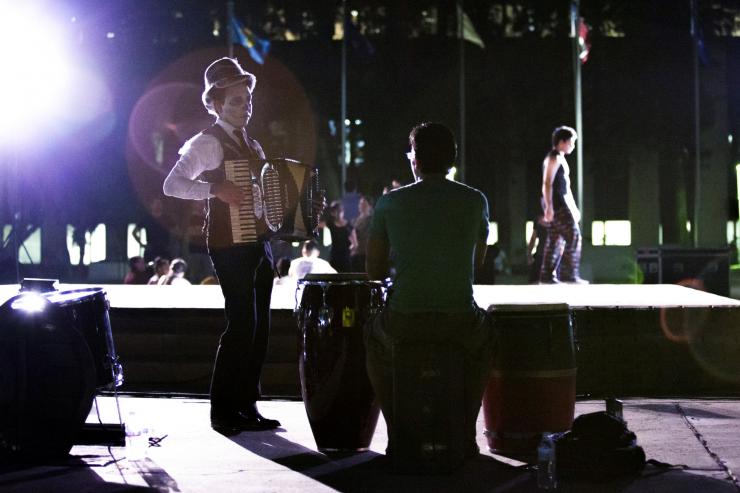 I had heard about South Coast Repertory’s Dialogues/Diálogos through previous HowlRound publications from Kelly Miller, Sara Guerrero, and Julie Marie Myatt and José Cruz González. I was excited to learn more at the Encuentro, as I knew the production had recently closed. I anticipated a reading of the play, or a dialogue about the art work that had been created and shared with the community—that would have been satisfying. My expectations were surpassed, however, and I was delighted to experience the creators’ journey as they led us in a similar experience, to understand the work as it was intended: an exciting collaboratively devised piece of theater for social change. Hearing the reflections of key players in the work proved fascinating and surprisingly touching. “It’s community-based theater on steroids,” explained playwright José Cruz González, of the $600,000 two-year project that recently ended its cycle. González went on to explain that story circles and workshops, with a total of forty-one events in the community (not including performances) yielded a play, which was in fact sixteen mini-plays presented at the Santa Ana Civic Center in the Fall of 2014. The structure works like this: The audience is guided by four lotería characters—La Muerte (Death), El Diablito (Little Devil), La Dama (Lady), and El Valiente (Brave One). Audiences then witness the story unfold in four unique ways, depending on which character is their leader. González, along with director Armando Molina and composer and lyricist Moisés Vásquez, engaged with over 1,200 Santa Ana community members in the development of the play, and ultimately ended up with over sixty cast members in the production. Furthermore, the ensemble explained that all aspects of storytelling were used to engage the creators and audiences including puppetry, dance, and music. González shared that they felt it was important for the story be told in a way that audience members did not need to understand any specific spoken language. 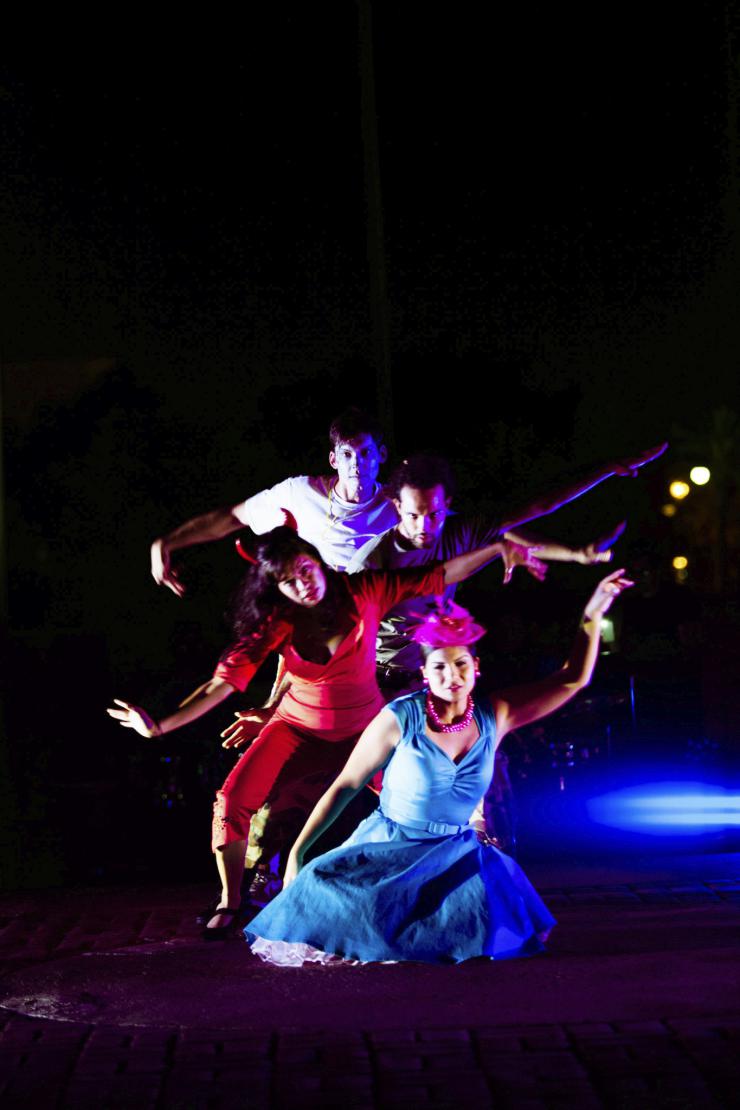 The major dramatic question of the play is: How does a community respond to tragedy? The question is raised after a car being driven by a teenager strikes a young boy named Andrés, who has no place to play. Both families are broken and forced to deal with great loss, as the teen is sentenced to twenty years in prison.

An essential voice on the panel, and clearly a vital part of the team was Moisés Vázquez, composer and community partner liaison. Moisés explained that the experience made theater accessible and demystified the art-form for the community. The participants attended free workshops and created art together. He explained that in order to engage the community in this way, the team had to re-envision how they would work, including considerations like time of day, child care, translation, and helping with basic needs to enable the participants to contribute. He noted that most participants would come to rehearsal after long days of work and in the midst of handling great family responsibility, among other challenges. He informed us that cast members were paid for their work, and everyone on the team was seen as equal, no matter their role or experience. Thus, cultural fluency and life experience were honored as highly as formal education and artistic familiarity (no one used these exact words in the presentation, but this struck me as a wonderful example of culturally responsive education, and one of the reasons that the work is so remarkable). The marketing team explained how they worked “puerta a puerta” (door-to-door), an intense grassroots model used to make sure that the community knew about the show and knew how they could engage in its creation and/or see it. Santa Ana community cast member Maria Elena Serrato explained that she felt a great deal of responsibility telling this story and representing her community. 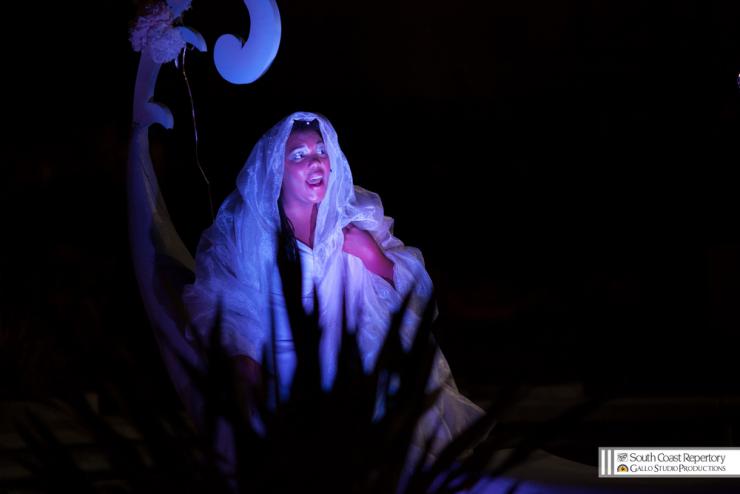 At the Encuentro presentation, in a seemingly organic manner, the panelists invited attendees to dance together. While there were steps being suggested, we were encouraged and invited to move in any way we wanted. At one point, the actor playing Andrés’ father sang us a heart-wrenching song from the play. Then, leaving Santa Ana and coming into our own Encuentro community, we sang a song taught by Moisés and Gabriel González:

We all jumped up, eager and excited to learn the song. I noticed a sense of pride within myself, building for the Santa Ana community, similar to what they must have felt singing the words written by and about their city. I noted that my fellow Encuentro-goers seemed as invested as I was in hearing more about the work. We asked questions about the structure of the project, the story of the play, assessment, and participant impact. 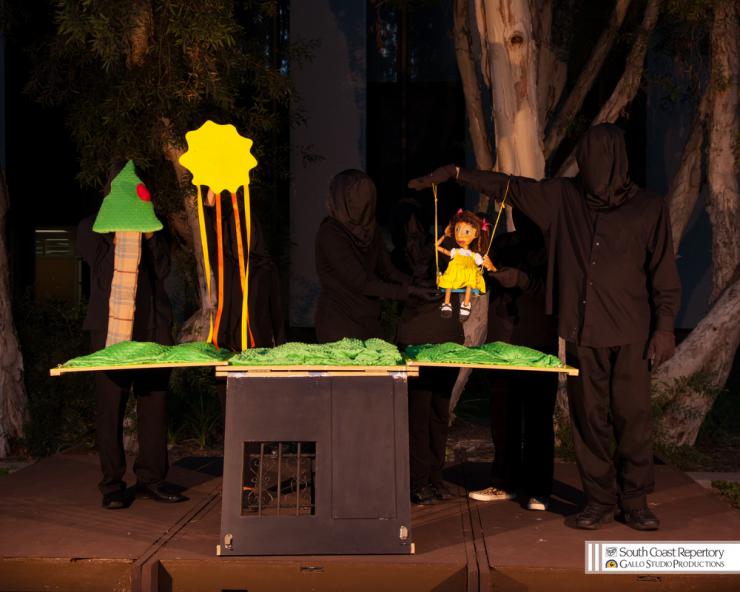 The productions that we saw on stage at the Encuentro 2014 were altogether exciting and amazing representations of Latina/o theater from theaters across the country. It was important, too, that the festival curators sought to honor the long history of Latina/o theater created specifically as art for social change; it was essential this aspect of our work was represented at the Encuentro. I wish I could have seen a full production of El Largo Camino de Hoy, but how do you do this work justice outside of its community? After all, the community of Santa Ana is the central character in this play. I think the choice of sharing how the piece works in its authentic context by talking about it and breaking down the model of how it was developed and shared with the community was great. Pulling us into it in order for us to feel how it must have felt to be a part of it was brilliant. Clearly, the tremendous investment from all of the artists and teachers is about more than the art; it is about how art serves community. In this way, the presentation brought a little bit of Santa Ana to us, and enabled us to see and feel how the work has impacted its community. This is exactly how this play and community-based theater needed to be represented. The only other authentic choice would have been to bring all of the Latino Theatre Commons to Santa Ana. Perhaps, someday.

The level of investment in this piece is so high in so many ways-it is truly astounding. I love hearing about the 'puerta-a-puerta' outreach to ensure all in the community knew of the project and the role they could play. I see this outreach as the personal invitation to the theatre and to creating art that is often lost---it invites those to the table who may see a postcard or poster and feel theatre/art is 'not for them' or who may otherwise not know about an opportunity at all.

Everyone at South Coast Repertory sends their thanks for this thoughtful coverage of ElLargo Camino de Hoy. We feel it's important to credit and thank the James Irvine Foundation, whose generous funding made this project possible from start to finish.

Roxanne. Thank you so much for sharing this. Community-engaged work like El Largo Camino de Hoy is necessary for connecting to Latino audiences and it's great that South Coast has recognized this.

Probably the most thoughtful example of community engagement and outreach that I've learned about to date. Thank you for sharing this project and process with the world, Roxanne! And to José, South Coast Rep, and the Santa Ana community-- thank you for doing the work that matters, and showing us how.

Cris Tengono talks about how, thanks to the pandemic, a virtual artistic world has begun to develop in Colombia—one of infinite possibilities and without borders, where nationalities do not matter—and shares some of the work that has come out of it.