In this series, Ben Yalom looks at aspects of devising and collaborative creation. The ensemble theatre movement has gained enormous momentum in recent years, and this series aims to note reasons for undertaking collaboration as well as best practices and common pitfalls.

“I am going to have lots of time for you all to be creative and give input. But I am also going to do my work.”

So said the director at the first cast meeting for a production by foolsFURY, the San Francisco-based ensemble of which I am co-artistic director, some years ago. The statement set off a faint alarm bell: I knew something was off, but I couldn’t put words to it. Certainly we want performers in a collaborative process to offer their best creative ideas. And certainly the director must do important work throughout. So what was the problem? Figuring it out made me think long and hard about how directing collaborative creations can differ from more traditional directing.

Instead of simply presenting my own artistic vision, I began to see my role as two-fold: presenting an overall vision, but also creating a structure in which the other artists could experiment.

In collaborative approaches, many of the familiar roles of theatre production change shape. While the exact nature of these shifts is different for every group, roles still exist. Usually someone is working as a director, others as performers, others as designers, and some or all as writers. But people may wear multiple hats, switching with varying degrees of fluidity. A critical aspect in a healthy process is that the roles are agreed upon by the group. If someone is going to have the position of director for a given show, they must have some degree of decision-making power; power which must be bestowed upon them by the rest of the group. If someone is going to work exclusively as a performer, the others need to agree that this person will not be involved in other tasks, such as research or writing. The ways power and task arrangements are decided is an interesting topic for another post. Right now, I want to look at how the nature of directing itself changes when creating collaboratively. 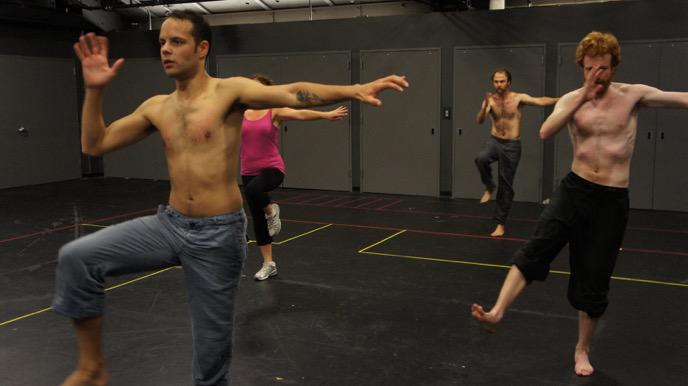 Early in my career I worked in a more traditional manner. With each show I directed, I created and maintained an overall vision, planned the bulk of the blocking, gave designers specific instructions about everything from particular pieces of music to the color schemes of costumes. This is how I had been trained, and what I understood directing to be. Several years into the life of foolsFURY we began calling ourselves a company of artists, and then an ensemble. With this came a gradual shift in my approach to directing. Instead of simply presenting my own artistic vision, I began to see my role as two-fold: presenting an overall vision, but also creating a structure in which the other artists could experiment. 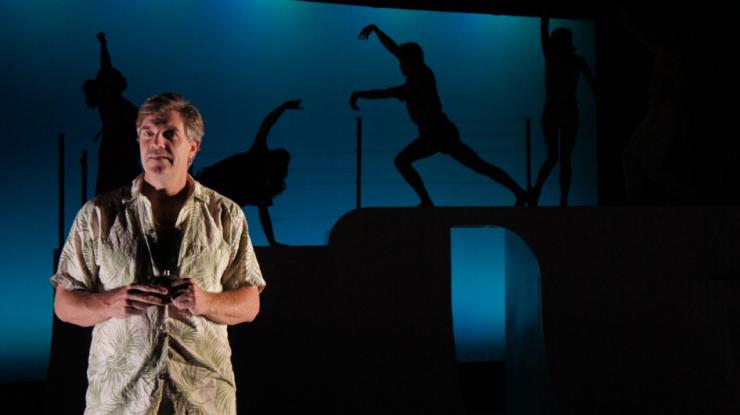 What does this mean? Through whatever tools they have, the collaborative director must create a space that encourages the greatest contribution from everyone else in the room. They must set tasks and challenges that inspire brilliant ideas and general awesomeness on the part of the other artists. They must glean the really hot ideas, hopefully a wealth of creativity beyond that of their own single perspective. And they must make selections between the offerings. At its best, this collaborative approach engages actors and designers deeply, giving them a profound sense of investment and ownership.

What does this entail for the director? It often means spending as much time and energy preparing specific tasks for the ensemble to explore as doing more familiar directing work, such as blocking and coaching actors. The tasks may be relatively simple—say, write for three minutes without stopping about your strongest childhood memory, or develop three ways of responding to a nearby explosion. Or they may be quite complex—make a three-minute movement sequence that presents your character’s main neurosis, or have each character describe what they know of the others as they sell them at auction. Finding the right task at the right time thus becomes the director’s creative challenge, and a main aspect of their work.

As a side note, when I give my cast tasks of this sort, I often borrow the marvelous idea of “coffee break directing” from Conrad Bishop of the Independent Eye: essentially giving the cast the task, and then going for a cup of coffee, or keeping oneself otherwise out of the way, while they explore. 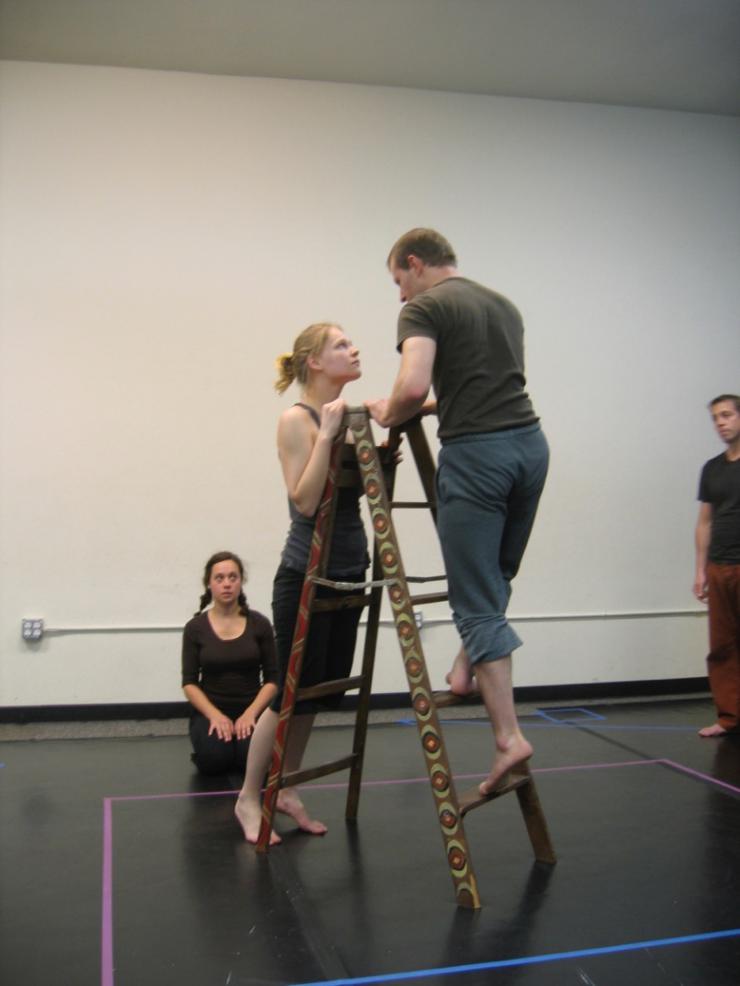 Often collaborative directing requires a great deal of trust in the process itself. For example, in 2005 foolsFURY began a project with novelist Doug Dorst. Doug and I were fascinated with Poe’s “The Tell-Tale Heart.” We didn’t know what the shape of the play to be, much less how this story fit. But we knew there was something there, and experimented for a week. We developed an abbreviated physicalization of the story, with precise, somewhat grotesque, gestural work. This was interwoven with several other stories, each with a different flow and style, and the three pieces were presented as an incubator project with our co-producer, Shotgun Players. A year later we returned to this project, curious to see how the ideas had fomented and evolved. We dropped “The Tell-Tale Heart,” along with most of the existing text, to prioritize several threads about larger contemporary societal issues. But as one does, we held onto the experience. And as we fleshed out the strange dystopian world of Monster in the Dark—a world of religious and governmental extremism (with sea creatures)—much of the gestural work found its way back into the new play, and ultimately shaped the nature of several scenes. 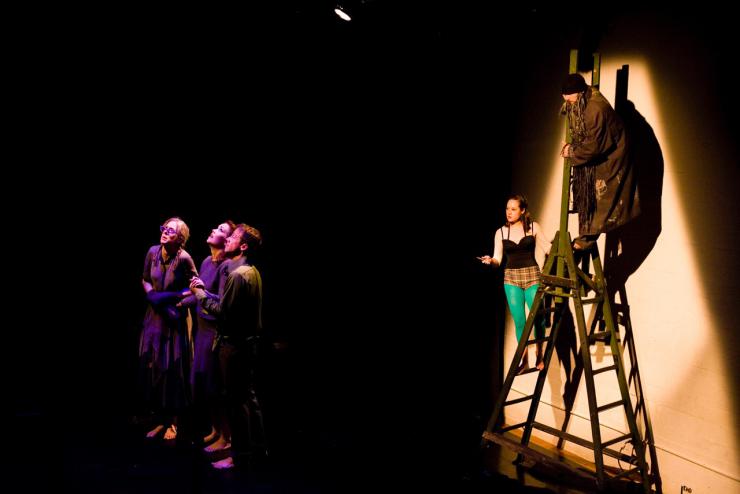 In addition to preparation and trust in the process, this work requires an unusual degree of confidence on the part of the director, for it can be both threatening and humbling to give others some control. Or to learn, as one does with the coffee break strategy, that there are times the director might get in the way more than aid the other artists!

This multi-faceted nature of ensemble directing was the crux of my discomfort in the cast meeting noted above. When the director said, “I am going to have lots of time for your creativity and give input. But I am also going to do my work,” they drew a distinction between the exploration of the actors and designers, and the real work of the director. I believe that the collaborative director’s work encompasses both, and one must pay as much attention to crafting the forum for creativity as to the more traditional directing tasks. The job is to carefully construct that creative space, then to hold the reins, helping steer the experimentation towards a vision of the overall project.

This shift is never easy. Ultimately it has made my own directing work much more interesting. Occasionally I am hired to direct a piece that must be directed in a more traditional manner. At first I am relieved, surprised at how clear the tasks are even when challenges arise. But over time I tend to get bored with my own vision, and with telling people what to do, when to cross, how to act. Then I long to get back to work with my ensemble, conceiving and implementing experiences in which actors, designers, and writers craft unexpected stories, and unforeseen beauties continually arise.

Good stuff, Judith would be happy to see more and more of this happening. Love from The Living, bb

Thank you Brad! I had the pleasure of meeting Judith last year. It's great to know (as people so often forget or take for granted) that ground we are walking on has been lovingly prepared by others before us!

I've found in working with the ensemble of an upcoming devised piece that my ensemble still appreciates brief input in the midst of our "coffee breaks." We're still only a few weeks into the process, but providing affirmation or slight guidance has helped some members break through walls that they've created. I think a major advantage of this approach is that as a director, I am coming at their work without their train of thought. Not completely knowing the direction they are heading in allows for a greater objectivity in guiding and responding to their work. Overall, I think an ensemble approach reinforces the director as facilitator and mediator, and these skills continue to serve me well even outside of ensemble driven work.

This is where I've been going too, and I think more and more directors will move towards a more open process. So many reasons for this in society as a whole, among them a push toward less hierarchical structures and a shift toward networked, associative thinking over linear modes. Regardless, the shift makes for a far more generative path than the traditional top down approach. We regularly ask performers to risk and to let go in order to make discoveries. The great confidence required for this shift in directing, as you nicely put it, is the confidence in the ensemble. It's that confidence that fuels the director's own risk of letting go. In a sense, the leader who leads least leads best, yet instead of requiring less of the director, this shift requires far more preparation, if only to let all the preparation go.

Well said! All this comes down to a selfless approach by all with the project at the center, which is an impossible task, and yet...

Devised work or not, it's a productive way to direct. I, too, structured rehearsals much more when I started out. The more I directed, the less I structured - and the more my actors contributed to the process. The funny thing is, it wasn't really my directing that was getting "better;" it was the larger contribution of my actors that was making "my" work better.

Ben, this is a window into a very rewarding creating process. A collaborative process is my only choice when working these days because the results are always empowering to every person working on a production. When directing I no longer see myself as the absolutist-autocrat providing the vision and telling all what to do, but the one guiding the flow of ideas and contributions of the actors and designers into a cohesive whole. This model has proven to be exhilarating! In fact, I can't wait to get back to rehearsal this afternoon and experience once again the energy that comes from all of my colleagues willingness to give and create.

Thanks Jose- I think "guiding the flow of ideas and contributions of the actors and designers into a cohesive whole" is an excellent way of describing this. Of course it's never all one model or another, and each process is different in terms of how much the director pushes for a certain direction, but overall this approach makes for a livelier, more engaged, and sometimes more demanding, rehearsal process.

We Didn’t Have Any Role Models
Michaela
Goldhaber
Essay

It’s Not All About Me
Chinaka
Hodge
Essay

It’s Not All About Me

Playwright Chinaka Hodge recounts her experiences producing her first play and how the collaboration process supported and enhanced the growth of her play.