Igniting a Transgender Revolution in Chicago

In the course of a couple months in the fall of 2016, a handful of plays with transgender leads and pivotal characters were staged in Chicago, Illinois. This came as a big surprise to myself, and most of my fellow trans actors, because we hadn't heard about most of them. None of the shows were cast with gender-variant actors, written by trans authors, nor created with any input from trans persons, much less those within the profession.

Now, you might think if anyone should have been resigned to this situation, it would have been me. Before transitioning, I'd lived forty-seven years as a cisgender male, steeped for over two decades in the straight-cis-mostly white sensibility at the heart of Chicago’s theatre practice. Issues of ownership and authenticity were largely trumped by the mainstream.

I'm not an academic, nor much of a theoretician. I'm pretty much a roll-up-your-sleeves-and-get-things-done person. I understand that trans artists are relatively few, and seemingly hard to find. As a result, plum theatre assignments go to ensemble members, Actors Equity Association (AEA) members, and others near the top of the professional pyramid. Since coming out as trans in 2011, I've kept my head down, resigned that our stories won't be told by those of us who lived them. Or at least, not for a long, long time to come.

That changed rapidly during the 2016 wave of appropriated and questionably-executed trans shows. I saw cis theatre artists actively misinforming audiences about my gender community. I got a little mad because all these stories had one sinister thing in common: they pushed us to the margins. Instead of acquainting theatre audiences with our humanity, they portrayed us as exotic, desperate, persecuted, and freakish.

As someone who has lived quite openly and happily as a transgender female, I worked hard to re-enter theatre as a play reader, understudy, then eventually lead actress; so, this situation simply felt unacceptable. The theatre has better options at hand and they need to be utilized.

First Response: Organizing
Through social media and personal connections, I organized discussions among local trans artists. We then mobilized to write to the companies involved, and speak up at talkbacks for their shows as much as possible. Granted, not all of us wished to openly participate for two main reasons: the fear of being labeled as "troublemaker," and not wanting to dictate artistic matters to the cis community. There is still an internal pressure to avoid asserting ourselves, and to not defend our authenticity against the mainstream.

But seven of us engaged in a Skype conversation with the director of one production. She listened with great respect to our concerns about what we saw, and what we wished we'd seen. To our great surprise, she confessed that if she could have a do-over, she'd either refuse the directing assignment, or work harder to include trans voices in the rehearsals. Furthermore, this director connected us with folks at the Goodman Theatre, suggesting they sponsor a larger discussion on theatre practices surrounding gender identity.

Moving forward, would our goals include further education, recommended practices, or proactive, ongoing advocacy? How would we accomplish this work, and involve over 200 Chicago theatre companies?

Making History in a Local Theatre Scene
Fortunately, the timing of this ask worked in our favor. The Goodman was proactively experimenting with newer works and diverse casting to connect with younger audiences. They offered their leadership, organizational resources, and networks to produce a serious discussion on gender. This discussion would not only serve their interests, but also save us some time in making our case to one theatre at a time on our own.

Goodman administrators worked with myself and other trans artists, and two prominent directors to produce an event that examines the state of gender in Chicago theatre, and the needs of local trans artists. On November 29, 2016, over 100 artistic leaders and managers convened at the Goodman to focus on trans stories on Chicago stages, and how to best tell them.

The event included a panel discussion facilitated by Megan Carney, Director of the Gender and Sexuality Center at University of Illinois at Chicago (UIC), and Artistic Associate at Rivendell Theatre Company. Several invited speakers shared their experiences of working as a trans person in theatre, and/or producing trans works. Speakers included: the writer-director team of Philip Dawkin’s Charm; myself and the director of Doug Wright’s I Am My Own Wife; the director of Darren Canady’s Transit; Artistic Director Will Davis of American Theater Company; and the cast and director of Transformation, new work created by an all trans team.

Unfortunately, lack of time did not allow us organizers to engage as much with our esteemed audience as hoped. However, written feedback afterwards indicated that a lot of learning happened in those ninety minutes, provoking new ideas and even some revised policies and practices. Folks from Steppenwolf Theatre were excited to report various changes, and even stepped forward to help Goodman staff coordinate our next steps.

Having broken the seal and getting the ball rolling, we wrestled with different issues after the event. Moving forward, would our goals include further education, recommended practices, or proactive, ongoing advocacy? How would we accomplish this work, and involve over 200 Chicago theatre companies? Though we’re still working through next steps, I'm optimistic about the enthusiasm and ideas coming forth. Real change is continuing to happen. 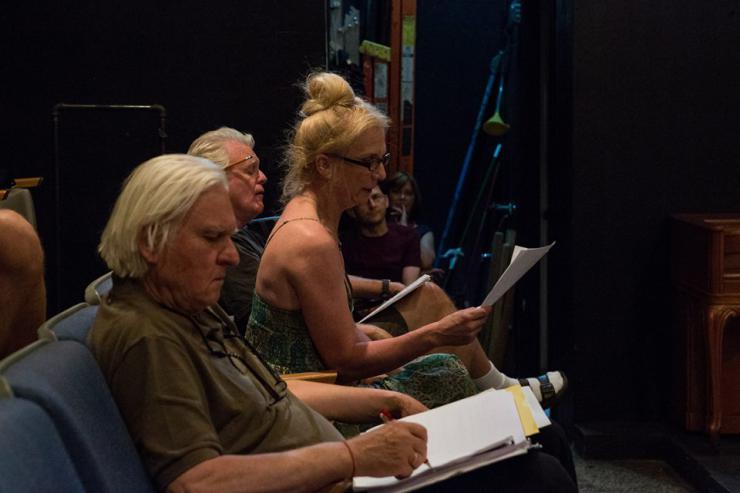 Although changing theatre culture doesn't happen overnight, I'm very encouraged. In most cases, there's a true desire to learn, work outside the box, and to enlist trans* actors, directors, writers, and designers, ensuring they operate in safe spaces.

Seeking Change in the Road Ahead
As a new company member of Pride Films and Plays, I'd noticed how even the most LGBT-focused companies struggled with similar questions of trans ownership, authenticity, and participation as mainstream companies. PFP is willing to explore this new ground, and encouraged me to launch a new playwriting competition. Our mission is to seek submissions exclusively from trans/gender-variant authors because they can better represent our trans lives, our needs, and our humanity to all audiences. The contest is called “The Great Trans* Play Contest” and it’s the first initiative of its kind in Chicago. We're casting a wide net, and fielding works from trans playwrights across the country.

Although changing theatre culture doesn't happen overnight, I'm very encouraged. In most cases, there's a true desire to learn, work outside the box, and to enlist trans* actors, directors, writers, and designers, ensuring they operate in safe spaces. I even believe Chicago will soon pool its resources with other theatre communities. I'm very curious to know, how have you sought to engage, to educate, and to demonstrate what authentic trans theatre looks like? What have your results been, so far? And how might we create a network of trans artists, and best utilize them in roles and creative positions throughout America?

We may despair about our movie and television industries, which are weighed down by a system of cis dominated privilege. But I truly believe that the theatre—more nimble, less commercial, and yes, more in touch with the country's future—can point a way forward for the entertainment industry.

We can, and we must. For trans people, it's a matter of sheer survival itself. With many theatre pieces placing trans people at the periphery of the American experience, our profession fails not only that community, but also many of our audiences. Although allies are indispensable in this effort, more trans voices need to drive such reform. So I challenge the theatre world: bring us to the table. We are ready.

To find our more information about The Great Trans Play Contest, click here. The final submission deadline is Sunday April 16.

This episode focuses on the 2022 Pulitzer Prize for Drama winner, Fat Ham by James Ijames. Leticia and Jordan discuss the recent production at the Public Theater, its conversation and diversion from Shakespeare, representations of Black queerness, and what it means to be soft as a black person.

Gender Euphoria, the Podcast, host Nicolas Shannon Savard sits down with storyteller, educator, and advocate for transgender rights, Rebecca Kling. Their conversation addresses Rebecca’s work as a solo performer-turned-activist, the importance of consent in deciding to take on the trans educator role, and her radical and hilarious approach to the post-show talkback: the Strip Q and A.