"I'm asking you to stop"

What The Qualms Ignores 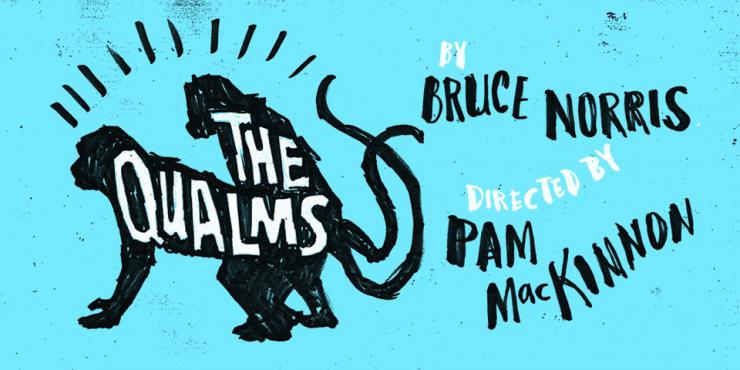 This is the pervading facade in Bruce Norris’ new play The Qualms, brought to life by director Pam MacKinnon at Playwrights Horizons. Norris, best known for penning Pulitzer Prize winner Clybourne Park, has whipped up a drama about bourgeois polyamorous couples who regularly attend house parties for the purpose of hearty discussion, mojitos, and something a little steamier. Tonight, hosts Gary (John Procaccino) and Teri (Kate Arrington) welcome an additional couple to the party, Chris (Jeremy Shamos) and Kristy (Sarah Goldberg), who are new in every way, especially to “The lifestyle.”

There is a diverse set of characters populating the play: Chris and Kristy, newlyweds; Gary and Teri, seasoned hosts; Deb and Ken, overweight, brassy woman and her black effeminate partner; Roger and Regine, veteran with a raucous sense of humor and his beautiful French woman. Todd Rosenthal’s realistic set is a delight, especially for those sitting in the first few rows—spectators who become voyeurs, practically sitting inside the house on stage. The living room’s décor is blandly tropical, reflecting a typical upper-middle-class dwelling. The O’Keeffe painting placed slyly to the side is a nice touch, as is the glass bowl of condoms hiding in plain sight. Norris' dialogue is snappy and MacKinnon's direction imbues it with a zippy charisma. At first glance, this play does a lot of things right.

But, The Qualms presents serious issues for consideration. Gary says what they do at these parties is “play,” like children do. But playing, as it turns out, gets complicated once you are no longer a child. There may be rules and time limits (there is, of course, more time allotted for threesomes) but perhaps not everything is policed that should be.

For a while, it feels like the group will just be chattering about social issues all night. Then, Roger’s wife Regine approaches Chris in an attempt to heat things up. She shows off her silk stockings and makes a few seductive quips about being “dirty.” She asks him if he wants to touch her. Of course, Chris, pinnacle of the awkwardly straight-laced white man, is unsure. She then asks if she can touch him. Before he can say a word, her hands are roaming. She makes some more coy comments about being in charge. Before we know it, she slaps his face. It’s nothing that’d bowl him over, but it’s certainly not a soft touch. She asks if he liked it. “Not really,” he says. She does it again. Without asking. Laughing, she says, “I can’t help myself,” and he responds, in a very reasonable tone, “Well, I’m asking you to stop.” Another slap. Chris then sort of loses it, and the rest of the group reacts with disdain at his disruptive behavior.

Imagine, for a moment, that the genders were switched in this situation—rather than brushing off the advance as an annoyance, there would certainly be uproar.

Imagine, for a moment, that the genders were switched in this situation—rather than brushing off the advance as an annoyance, there would certainly be uproar. And rightfully so, this is consent being ignored. And consent being ignored in a sexual situation is assault. However, instead of addressing it, Chris hides his anxiety and tells everyone else it’s nothing. Regine later apologizes, but the moment is a mere blip on the play’s radar, as if she had only spilled something on his shirt. After this, it is never referenced again.

The Qualms’ characters simultaneously claim liberation from societal conventions and reinforce age-old attitudes—like how two women together is hot and even encouraged, while two men together is not. The first even remotely sexual act in this largely sexless play happens between Teri and Kristy, and of course, their husbands don’t mind. Later, Roger asks Chris casually if he’s ever been with a guy. Chris acts as if the very notion is preposterous, and is chastised by everyone for doing so. Once Chris begins to entertain the theoretical possibility, Roger reveals with a guffaw he lied about having been with a man, and Chris is humiliated. This effectively makes male homoeroticism into a joke, but one that no one particularly takes issue with… except for Chris. There are other similar moments in the play, typically helmed by machismo-filled Roger, namely when he jokes about how sad it is he cannot copulate with a cow because it is now considered rape. Everyone titters, but Chris combats Roger, explaining that the cow actually can't consent. Everyone groans over Chris's logic, and chides him for being no fun. The thing is, Chris may be self-righteous, but he's also right.

Eventually Chris has had enough, and ostracizes himself from the rest of the group and his wife. In doing so, he says inexcusably harmful things that would make even the most out-of-touch audience member shake their head. He tells Kristy he “responded inappropriately to an unfamiliar situation,” and in many ways this is true. But I, as someone who has both attended parties of this nature and been consensually slapped in the face during sex, would say Chris’ reaction to Regine certainly was appropriate, and that this event informs his increasingly irrational behavior for the rest of the play. Seeing that these supposedly progressive and inclusive people ignored his physical boundaries, made male homosexuality into an embarrassing joke, scoffed at pacifism, and demonized every conservative inclination he possessed, I didn’t blame Chris for calling them “sad.”

It could be argued that these more insidious interactions are meant to incite a dialogue in the spectator, allowing them to reflect on their own behavior in similar situations. However, it is unclear if this was actually achieved. Charles Isherwood’s New York Times review says “Chris also doesn’t play well with others, angrily rebuffing Regine when she flirtatiously gives him a few slaps.” Other reviews don’t mention this incident in the slightest. This makes it obvious that not only did this arguably major event go unnoticed, but also seemed to be misinterpreted entirely.

But playing, as it turns out, gets complicated once you are no longer a child. There may be rules and time limits (there is, of course, more time allotted for threesomes) but perhaps not everything is policed that should be.

Because this play is written in realism, there is no chance for a peek inside Chris’ head. Nor do we get to glance in any of the house’s private rooms. We get to hear only what everyone is comfortable with saying around each other. This results in essentially the majority opinions being stated and restated, which is why it is so disappointing when these opinions turn out to be no different than what you'd expect. A play like this, featuring sexually explorative characters interacting in a place away from the public eye, provides such rich opportunity for evoking new ideas and thinking, and for telling stories rarely seen on the stage. It’s of course not necessary to only present radical ideas onstage, but when critics are reacting to The Qualms’ face-slapping scene in the same way its flawed characters are, it calls into question the thinking that the play may be (unintentionally or intentionally) perpetuating.

Once everyone has changed out of playtime attire, it’s time to get serious. One of The Qualms’ most genuinely poignant and intimate moments happens when everyone is fully clothed: a series of exchanges where each character muses on their first sexual experience, and all share in moments of quiet regret and remembrance that sex is not always fun and games. Arrington shines especially bright here with a long, tender monologue about Teri's eventful and often painful past. It’s impactful and genuinely refreshing in that she, a sexually experienced woman perceived to occasionally be an airhead, is allowed to speak uninterrupted for so long and, for once in the play, actually not judged.

Overall, The Qualms is a lot of talk amongst a shred of actual sex, and that’s fine. Talk is important. I could talk about sex for days. It’s undeniable that The Qualms raises questions on issues of sexuality, monogamy, and social norms. And sure, I laughed, I applauded, I even gasped several times—but as good a time as I had, I still found myself wishing for more.

"...when critics are reacting to The Qualms’ face-slapping scene in the same way its flawed characters are, it calls into question the thinking that the play may be (unintentionally or intentionally) perpetuating."

There are actually numerous instances in The Qualms that touch on the intersection of sex and violence, as I point out in my review http://newyorktheater.me/20...

No, I didn't specify Regine's slap, but I do talk about a passage by Ken (a character who may be Norris’ mouthpiece) who says that Americans' fear of sex is what makes us violent: “We’d prefer death,” Ken says.

I disagree with the notion that because critics failed to mention (or they misinterpreted) the specific incident in the play that Ms. Graves mentions, that Norris' intention to start a dialogue failed. The critics represent a handful of reactions out of the hundreds of audience members that saw the play. Having seen the play, I absolutely spoke with friends at length after the show about that particular incident (along with many others) in the play, and discussed how it would have played out if the genders were reversed. I don't think the play is reinforcing old age attitudes; I think Norris is presenting them in order to be picked apart and questioned and examined (as Ms. Graves does, quite well).

Yes. I just don't see that this piece sates that anything critics wrote prevents people from having a dialogue.

Island Hopping in New York City for Theatre: How Live, In-Person Theatre Is Being Reimagined as it Reemerges
Jonathan
Mandell
Essay

Island Hopping in New York City for Theatre: How Live, In-Person Theatre Is Being Reimagined as it Reemerges

Jonathan Mandell reflects on a number of live, in-person productions that have taken place in New York City over the course of summer 2021.

Can You Feel the Water Rise?
Adi
Eshman
Essay

Can You Feel the Water Rise?

Sean Anthony Chia examines the impact of a powerful story—one without spectacle—through the lens of Isaac Gomez’s the way she spoke.