One of the internationally best known Romanian theater artists, Gianina Cărbunariu (b. 1977) a playwright and a director, made her debut in 2003, with a remarkable show—Stop the tempo—that was making use of only three flash lights, telling the story of three young people caught in a burst of anarchic rebellion against the omnipresent consumerism. Until 2013, Cărbunariu worked only on the independent scene, usually staging her own plays. Cărbunariu tackles taboo subjects from a strong political perspective that have resulted in plays ranging from a  publicly unacknowledged interethnic conflict in Romania in 1990 (20/20, 2009) to the lack of social solidarity in an increasingly neoliberal national context (Solitarity, 2013). Her productions were invited to different theatre festivals such as the London International Festival of Theatre, Festival TransAmeriques (Montreal), Nitra Festival, Biennale New Plays (Wiesbaden) and New Drama (Moscow), and they have been performed on stages all over Europe.

Her texts have been translated and produced by the Royal Court Theatre in London, the Schaubühne Berlin and the Münchener Kammerspiele. Gianina Cărbunariu’s latest show, Typographic Majuscule (a co-production in the framework of the European project Parallel Lives, initiated by the Nitra Festival), is based exclusively on documents from a file of the Romanian secret police, Securitate—a surveillance file of a teenager investigated by the authorities for writing subversive slogans on walls in his small native city in the north of Romania. 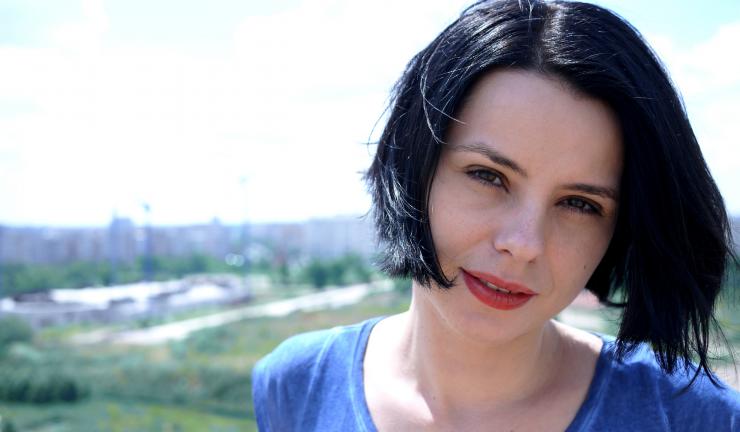 The Beginning: A Decade of Independent Theater
I studied theater directing at the National University of Theater and Cinema in Bucharest, but I was writing drama before that. When I graduated I was offered possibilities to work in several state theaters, but I didn’t like the idea. I knew the experience of colleagues a little older than me that had worked there and they were not happy experiences. As repertory theaters, they have a permanent ensemble, which, as an idea, is not a bad thing as long as the system provides (or could provide) guarantees for the creation of a team. But as long as the status of being employed in a theater becomes just a means of getting work somewhere, and the actors are busy with other projects (soap operas, commercials, etc.), one can rarely find in a state theater a team to work with. During my university years, I was able to form a team with which I worked for four years. I connected to these people, I felt we had the same concerns and not only aesthetic ones but also some similarities in the way we saw what was happening around us.

So I decided to try to do a show in one of the first independent spaces in Bucharest. And I think the decision I took then, in 2003 – 2004, was the right one. For me, at least. At that time, there weren’t many independent groups, it was not too common a practice to get you together with some people and do a show with little or no money at all. It was a pretty critical economic time. Ten years of independence have not been easy, we all made sacrifices, but I managed to do the shows I wanted to do. After 2007, things improved for some time, there were calls for funding independent projects. Grants were pretty poor but they existed. This made possible the emergence of other groups of independent artists interested in the political, in the social, artists that made very interesting projects, very unusual for the Romanian theater: Bogdan Georgescu, David Schwartz, Ana Mărgineanu Peca Ștefan—just to give a few examples. In the past two years, however, these funds for independent projects (already so precarious) are under a question mark, so that the survival of these groups is seriously threatened.

The Theater as a Canvas for Social Debate
More than in documentation, I'm interested in what I want to say. I might choose a public event that everybody knows about and give it a twist, depending on what I intend to say. It doesn’t mean I’m diverting from the subject. An example: the wall scene in Solidarity, a wall meant to segregate a community. I read an excellent magazine article about a Romanian city where the local authorities had decided to build a wall in order to isolate the Roma people. I read it with the actors, especially because it gave a lot of details. But what interested me in that scene, besides the actual incredible fact that in a Romanian city somebody had decided to build, in 2011, a wall between “white people” and “gypsies,”was the current Romanian political discourse. And I was interested in whom I was addressing too. I realized that I was speaking, just like the current political discourse, to a middle-class of which I was a part.

Many things come from documentation and from getting acquainted with a reality and I think my shows are translating this encounter with reality, between this reality and one or more forms of subjectivity.

That wall was something concrete but we are witnessing now a more perverse and deceitful political discourse, that the Romanian middle-class, with their nerves stretched to the maximum, takes it extremely easy. As for instance, when we were told that being a patriot means having more children, in order to beat the birth rate of Roma families. Such unacceptable discourse is totally acceptable to our middle class.

Midway Between Fiction and Documentary
Every show based on documentation that I've done in recent years used these documentary techniques in order to clarify, among other things, the concept of space. Many things come from documentation and from getting acquainted with a reality and I think my shows are translating this encounter with reality, between this reality and one or more forms of subjectivity (mine and of those who were taking part in the documentation). But it's fiction. I don’t think much about giving it an accurate conceptual name. Let's say that what I did until now it's a theater that plays on the boundary between reality and fiction, trying to investigate exactly this limit and inviting the public to participate in this exploration.