Recommended
Devising Our Future
HowlRound Theatre Commons
Most Discussed
Designing Collaboration: In Search of a Taxonomy of Collaborative Methods
Emily McConnell
Most Watched
The Gathering from the CrossCurrents Festival
Wednesday 4 May to Saturday 7 May 2022
Upcoming
Livestreaming a Conversation: #DeafWoke with John Autry II
Friday 20 May 2022
Essay by
Andy
Donald

Open Submissions that are Truly Open

I wonder if reading alone at my desk—or in recent years, on my Kindle while riding the train—is the best way to evaluate an unsolicited play and then decide whether it’s right for the company. My hunch is a fairly confident “probably not,” and I’m certain there must be other artistic directors who suspect this too. I am, however, charged with a long-standing artistic policy committed to the true discovery of new and unknown talent, making the unsolicited pile occasionally useful. A majority of my script coverage not only requires that I critique a play, but also attempt to get to know its writer’s potential between the words. This often feels like an impossibly tall order, partly because I’m a firm believer of the obvious—plays should be seen, not read!—and partly because I know that rejecting something after quickly reading ten pages does nothing to advance our mission of developing the imperfect, promising script by the rawest of talent.

T@9 promotes an unusual democracy that puts play development back in the hands of the artists themselves. It insists that what creates lasting works of art is feeding off of the energy of an artistic community that you can always retreat to, depend on, and never fear.

But luckily for me, I inherited a secret weapon when I took this job.

Tuesdays@9 is Naked Angels’ long-running cold reading salon—taking place weekly from Labor Day to Memorial Day—and its growing community of writers, actors, musicians, poets, comedians and novelists is an awfully talented tribe. Every Tuesday for nine fast months per season, this is the rare epicenter (on both coasts!) for all kinds of new work development, driven by artists, for fellow artists and solely benefitting the artistic process. Part of its charm over the years is the collegial, loose, and cramped atmosphere in basement theaters (equipped with full cash bars) located at Union Square in New York and in Hollywood out west. On any typical Tuesday, you’ll see famous alumni mixing with the new faces whom you haven’t heard of yet, but certainly will soon. They’re all returning home, tied together by one belief: it starts here.

Tuesdays@9 came to life on the night of the first Gulf War, when its founders—Naked Angels company members Frank Pugliese, Lili Taylor, Kenneth Lonergan and Pippin Parker—were in search of a way to discuss what was happening overseas. “The thought being that groups of people, artists or not, should come together, in a theater, face to face, with original pieces, found text, interviews, songs – anything that came close to what they were feeling and seeing,” says Pugliese. 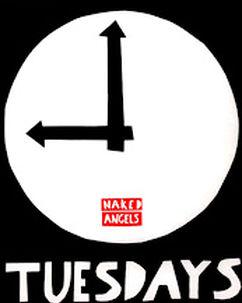 What it’s ballooned into over the last twenty plus years is a popular (and packed) open-mic for new work, serving over 200 people each week in two cities, absolutely free of charge and open to anyone who walks through the door. Writers bring in five-to-ten page samples of their works-in-progress, cast them on the spot with actors who show up, and hear their work aloud often for the first time. T@9 works best when writers come back with the next ten pages and start building full-length material right in front of you. In many cases, work first noticed at T@9 will matriculate up our own development ladder before moving on to a world premiere production, with us or elsewhere. Geoffrey Nauffts’ Next Fall, a play that started as a small idea at T@9 and eventually transferred to Broadway, is the most recent example of this particular kind of play development—kicking ass and taking names.

T@9 promotes an unusual democracy that puts play development back in the hands of the artists themselves. It insists that what creates lasting works of art is feeding off of the energy of an artistic community that you can always retreat to, depend on, and never fear. If you need it, it’ll be there for you, every Tuesday, ready to receive your latest draft, and armed with the ultimate feedback tool: an audience. And the open submission policy feels truly open—if you submit, you get a shot.

I’ve got a crush on Tuesdays@9. The surprising collaborations it forges between artists from all kinds of crazy creative backgrounds are a close second to the consistent quality of material it produces. And not only does the program discover the occasional diamonds in the rough—the desired result of any open submission policy—but I get to come in contact with this new work in performance first, meet the writers face-to-face, and most importantly, introduce them into one of the most unique and loyal families around.

We don’t have a literary manager sifting through cold submissions. We can’t afford one. But Tuesdays@9 makes me think Naked Angels already has a cooler alternative.

California
Florida
Literary Management
New Play Development
New York
U.S. by State
Most Discussed
Designing Collaboration: In Search of a Taxonomy of Collaborative Methods
Emily McConnell
Most Watched
The Gathering from the CrossCurrents Festival
Wednesday 4 May to Saturday 7 May 2022
Upcoming
Livestreaming a Conversation: #DeafWoke with John Autry II
Friday 20 May 2022

A hat tip to Craig Carlisle, who ran it for years. He opened Tuesdays with a segment encouraging audience members to plug and promote upcoming projects, creating a real sense of community. Tuesdays is a great place to see and meet NYC actors.

On the subject of community building, another model is the great Boston Theatre Marathon, an annual feast of 50 short-plays presented over one 10-hour day. Each play is staged by a different Boston theatre company, making for a real assembly of the regional theatre community.

Thanks Andy! I've been a part of several convenings in the past few months where questions about submission policies and self-producing, along with the omnipresent “how do I get my play read?” consumed hours of discussion, and you've just provided us with a simple, easily replicated model that can be activated almost anywhere by almost anyone. Ladies and gentlemen of the regional theatre, take note!

Feeding off the energy of an artistic community can certainly assist and support the creation of 'lasting works of art', I applaud that type of endeavor wholeheartedly, and other theatre companies and regional theatres would be probably surprised by the potential fruit this activity would provide them [in many different ways] if they were to launch such programs themselves. But it's not the only thing that creates lasting works of art. I think if we're honest no one really knows what the magical ingredients are for the creation of a 'lasting work of art.' I like the experience of bringing in a piece of work, 5 or 10 pages, and having it read and hearing it out loud for the first time, as well as getting feedback from others [actors, writers, and just plain audience folk]. And i have received some insight, comments, suggestions, that were indeed helpful in the continuing process and shaping of the piece. I'm also aware that an opinion is an opinion and someone elses sensibility of a piece of writing is not only based on their knowledge and skill of craft, but also personal likes and dislikes which may have little to do with the intention of the piece or even possibly the skill of the writer. I also find writers give suggestions on how they would write it [although they are usually not aware they are doing that] as if their style of writing is to be emulated. It takes a mature ego to sidestep this all too easy trap and reall LISTEN to the piece, it's rhythms, silences, style, emotional timbre, as well as words. Some actors are good at cold readings and some are lousy. Also, not having any time to rehearse there is not any time to discover the intentionality underlying the palywrights work. sometimes it's more up front and sometimes it's not that obvious. There have been times when I've heard a cold reading of my work and it's provided nothing, either because the actors were limited in their cold reading skills, or acting skills, or because they simply didn't get the rhythm or style of it, or underlying intentionality. I hear people speaking the dialogue when I'm writing a play, I hear the intention and emotional timbre, I often see how they are moving. Probably my years of experience as an actor and director allows for that process, but I would imagine a lot of playwrights have a similar process. So while us writers welcome the cafe style open mike venue, because we KNOW it has it merits, and we definitely WELCOME them, that does not mitigate the issue and fact that getting our completed plays read, the plays that have had much time being personally developed in one format or another [partial readings at writers groups, a mounting of an Act at a local community theatre, a cafe style open mike night etc] . . . getting these plays read is VERY VERY DIFFICULT. Of course everyone knows this. The solution(s)? Well I suppose that's one of many reasons for the existence of HowlRound.

I feel like I'm learning about more and more of these new play cabarets. I this would be cool to get these broadcast online from various cities all over the country on a weekly basis. It would give the national community a sense of what's being written and developed outside of their individual communities and give writers a cool record of the development of their work.