Out of Hand Theater creates innovative, interactive, intimate events. Sometimes in theaters,  but more often not. We partner with scientists, teachers, activists, business leaders, and other passionate experts in our community to create events about their work. In a climate where audiences for traditional performing arts are declining, we provide free public art to tens of thousands of people every year. In an age when digital entertainment dominates live performance, we provide interactive events that celebrate community, reinvent the relationship between audience and performer, and create moments of mass intimacy. Out of Hand was founded in 2001 by a group of Emory grads. Our goal from the start was to create immersive experiences—Events with a capital E.

We choose subjects that matter to our community, and then we partner with passionate experts to create compelling, intimate theatrical events, engaging the community around these subjects. In 2008, we got a commission from The Playwriting Center of Theater Emory to develop a new play in partnership with Frans de Waal, a world authority on primate behavior. The resulting play, Hominid, premiered in 2009. 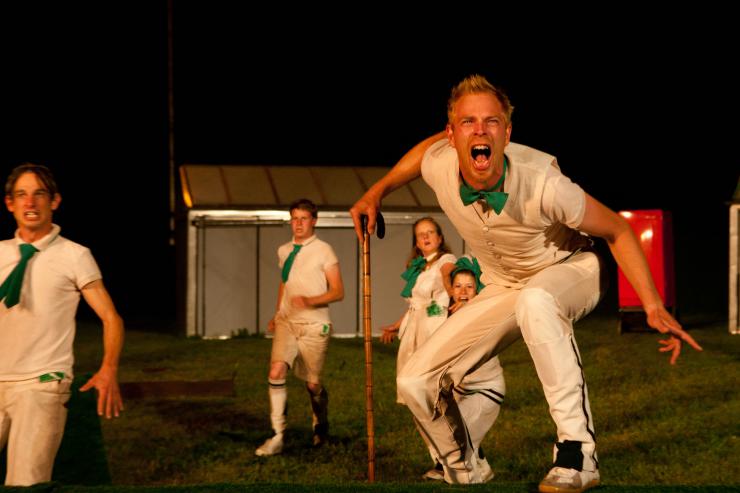 In 2010, we partnered with The Lunatics, a Dutch spectacle theater company, to tour a large-scale, outdoor version of Hominid to five cities in Europe. 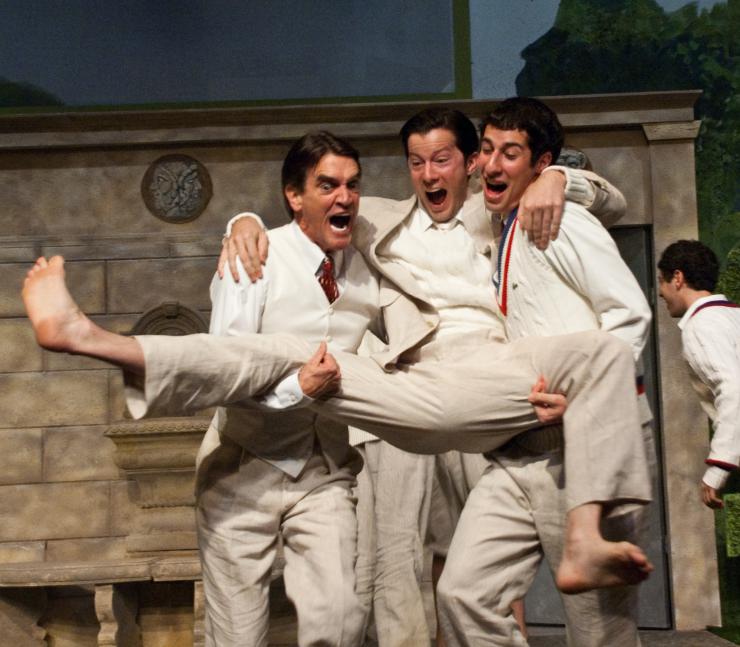 In 2010, we collaborated with the Atlanta-based Center for Chemical Evolution, an international group of scientists who study origins of life chemistry, to develop Group Intelligence, a flash-mob-inspired event where participants model molecular self-assembly on a human scale, following instructions they hear on their iPods. 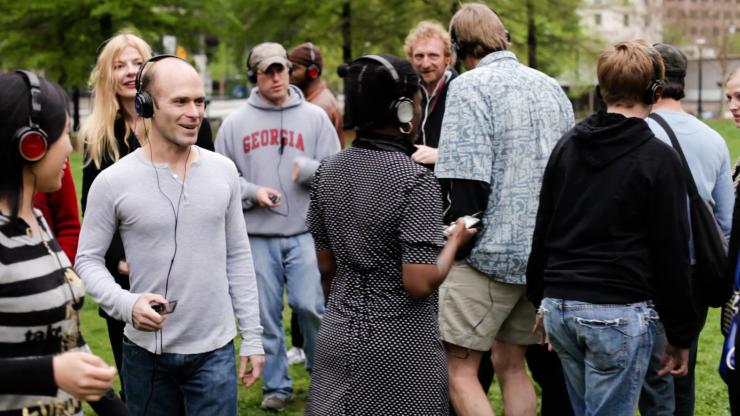 Group Intelligence has toured Europe and the US. More than 1000 high school students have already done the free classroom version this year.

Last year, we worked with our playwright in residence Steve Yockey, Emory’s Alzheimer’s Disease Research Center, and leading (Atlanta) Alzheimer’s expert Lary Walker to develop Blackberry Winter, a new play about a daughter doing her very best to shepherd her mother in safety and comfort through the memory loss and dementia associated with Alzheimer's disease. The drive behind Blackberry Winter is to engage people with Alzheimer’s disease, their families, and the community in conversation around this isolating, stigmatized, epidemic disease, which is predicted to affect one in eighty-five people globally by 2050. Blackberry Winter just got picked for the National New Play Network Showcase, and it will have a workshop reading at Orlando Shakespeare in November before premiering next fall.

We also create interactive experiences that embrace new audiences, both inside theaters and in public spaces. These include our current production of White Rabbit, Red Rabbit by Nassim Soleimanpour, a unique theatrical experience from Iran about freedom and conformity. We are producing thirty-four performances of Rabbit, half in theaters and half in private homes, with a new venue and a new performer every night, including many of Atlanta’s very best actors. Every year we produce artist Caley Vickerman’s interactive event Guerilla Haiku at The Decatur Book Festival, where we invite the public to cover the city with original poetry in sidewalk chalk. This generates over a thousand poems, which get read by tens of thousands of people. Every year we also make a new version of The Game, an urban challenge where teams race each other around the city following clues and deciphering codes. To solve the clues, players must interact with architecture, monuments, and actors in disguise. This year we are developing a new annual offering, Resurgens, a spectacular theatrical event with large-scale puppetry, for the Historic Fourth Ward Park in Atlanta. Resurgens will feature an enormous phoenix puppet by Atlanta artist Julia Hill, a band of raucous musicians dressed as Hekoya (the Thunderbird sacred clowns of the Lakota people), and kids from the neighborhood elementary school, cyclists from Atlanta’s Bicycle Coalition and Old Fourth Ward resident and business groups dressed in bird costumes. Resurgens celebrates the resurgence of The Old Fourth Ward, the place of Martin Luther King Jr.’s childhood home and The King Center, through the story of the phoenix, the symbol of Atlanta, rebirth, and renewal.

Since our founding in 2001, Out of Hand Theater has developed fifteen original pieces, eight of which have toured the US and Europe. With every project, we try to involve the audience in a new way, from flash mob to detective work to getting into a car with a stranger in The Break Up to having tea with a prostitute in a private home in Salome. We make interactive, innovative, intimate events because we are committed to making work that could not be experienced on a screen of any kind; that literally requires the live presence of the artists and audience. We can’t compete with TV, movies, and the Internet on their terms, but we have something they’ll never have: live human connection, creating moments of mass intimacy. We partner with passionate experts and community organizations because this ensures that we make work that our community wants and needs, work that is of and for our community. It also has the wonderful side effect of providing us both funding and audiences. Finally, we provide free public arts to tens of thousands of people every year to bring the performing arts to people and to places that wouldn’t have them otherwise, and to transform our public spaces into exhilarating environments that invite interaction and ignite imaginations.

Growth Through Touring and Tension

Founder, Ensemble Member, and Former Artistic Director of Lookingglass Theatre Company, David Catlin, shares how their limitless aesthetic showcases their Chicago-based artists across the country. In addition we dive into their unique shared leadership model, their growth and goals for the future, and how tension with your board members can be a good thing.

No Screens with Ariel Fristoe of Out of Hand Theater

From the Ground Up Episode #13

On this episode of the From the Ground Up Podcast, Ariel Fristoe of Out Of Hand Theatre talks about how their unique games and creation process translates from free experiences for audiences all over Atlanta to corporate training.

Playwright and producer Samantha Mueller talks to director and educator Colleen Rua about their mutual passion for immersive theatre.