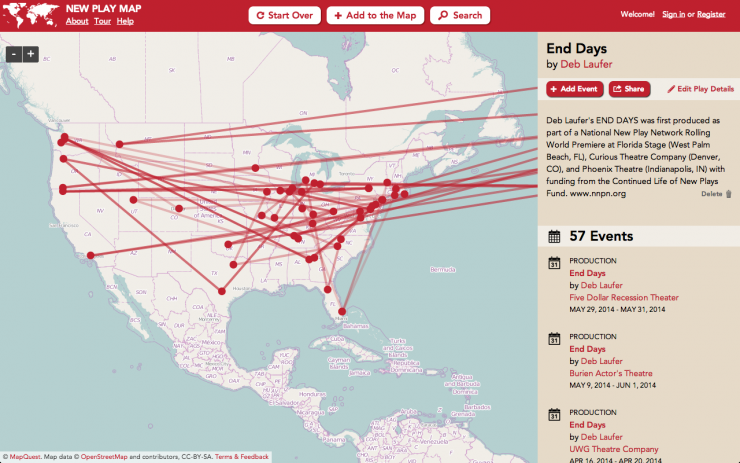 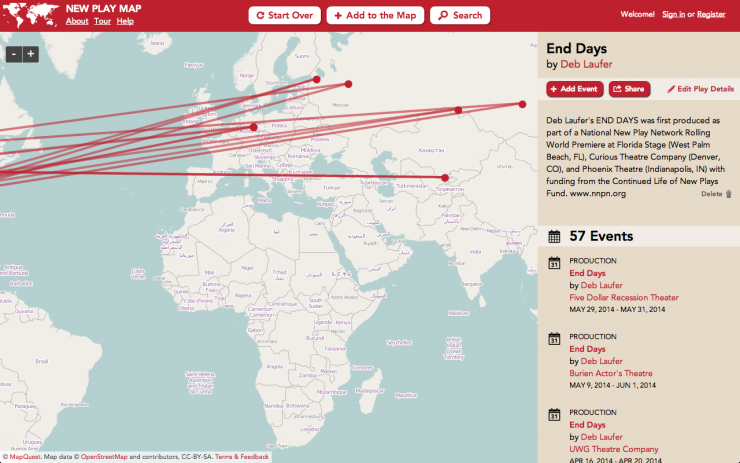 (Click on the images above to view the New Play Map journey of End Days by Deborah Zoe Laufer.)

1. How did the different communities (creative team, location, audience) influence the development of End Days?
The first few productions of End Days were radically different—the theaters themselves ranged from a 250 seat proscenium to an intimate cabaret. I loved seeing how the different venues affected that play. And of course, a play about religion and science gets a markedly different response depending on the community.

2. Did you rewrite after the first NNPN Rolling World Premiere? Second?
I did rewrite after the first premiere. But it was a play that had gone through quite a bit of development, so I'd really "found" the play and where it landed with an audience at its first premiere at Florida Stage, rewrote during those rehearsals, and then not a great deal after.

3. What’s one valuable experience you had during the NNPN Rolling World Premieres that made a significant impact on your process?
The thing that's most valuable to me in seeing several productions in close succession is that I get to find out what is inherent in the play. I was very involved in the rehearsal process of the first premiere at Florida Stage, so the production reflected a good deal of what I'd envisioned. There's great satisfaction in that, but there's so much to learn in seeing what happens when I'm not there to influence the results. The second production, without my constantly saying, "it needs to fly!" ran a half-hour longer. At first, the pace terrified me. Then, once I adjusted my expectations, I recognized that there was a very different quality to the piece when my internal clock wasn't pacing it, and there were remarkable moments that I could never have anticipated. So, my not being in the room helped me see what should actually not be clarified in the script—what should be open to interpretation. And what wasn't as clear as I thought it was, that I needed to clarify.

4. Six years later, where is the play now? When/where did the development process end—if it ended?
End Days has had over fifty productions in four countries, and there are several scheduled for this coming year. I strongly attribute its success to its NNPN Rolling World Premiere, and the stamp of approval that gives a play.

Florida Stage being in the proscenium and The Phoenix being an intimate cabaret gave me a sense of how the play shifted when it was that close and immediate. And the pace of it was radically different. But...I'd workshopped End Days at The O'Neill a month before Florida Stage so in all honesty, I didn't rewrite a great deal. I'd written thirty-four different drafts of one of the scenes before I even got to the workshop, so that play was explored. I think I needed to see how what I'd written worked. Maybe I made some small cuts. But that was it.

What I imagine the greatest impact of the NNPN Rolling World Premiere was to End Days was the buzz, publicity, approval it got before it even started. I do think it's a play with broad appeal, but I can't flatter myself that it would have had over fifty productions world-wide without that kind of launch.

I am so proud to have been in that production that launched the rolling world premiere!!! It remains near and dear to my heart. It was a wonderful experience to have Deborah there, helping us find her vision. What a tremendous benefit for a playwright. 50 productions of it now....wow!!!