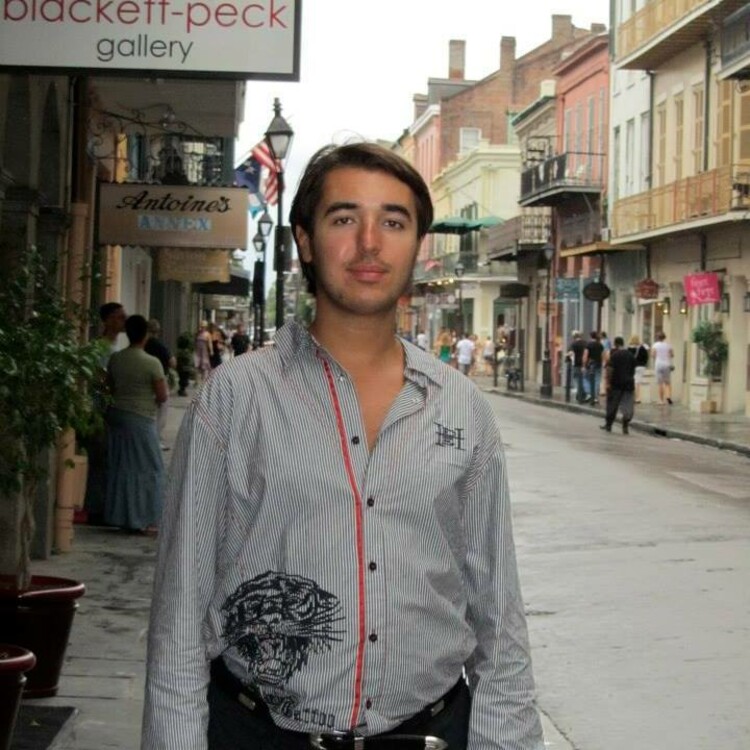 The Rise of Climate Refugees in This Sinking Island

“And the water is here now. I’m not talking some sci-fi movie. I see it. I live it. It’s tangible.” While actor Arisael Rivera delivers these powerful lines during the first half of the Anthropologists’ production of This Sinking Island, a siren sounds and actress Arden Winant’s legs become engulfed by blue fabric. The nameless characters in this scene are climate refugees, and the blue fabric, fluttering like a butterfly, represents rising sea levels. The audience members are the ones making it move, having been prompted to do so when they hear the siren sound. They mirror the government—complicit in their apathy towards climate refugees. 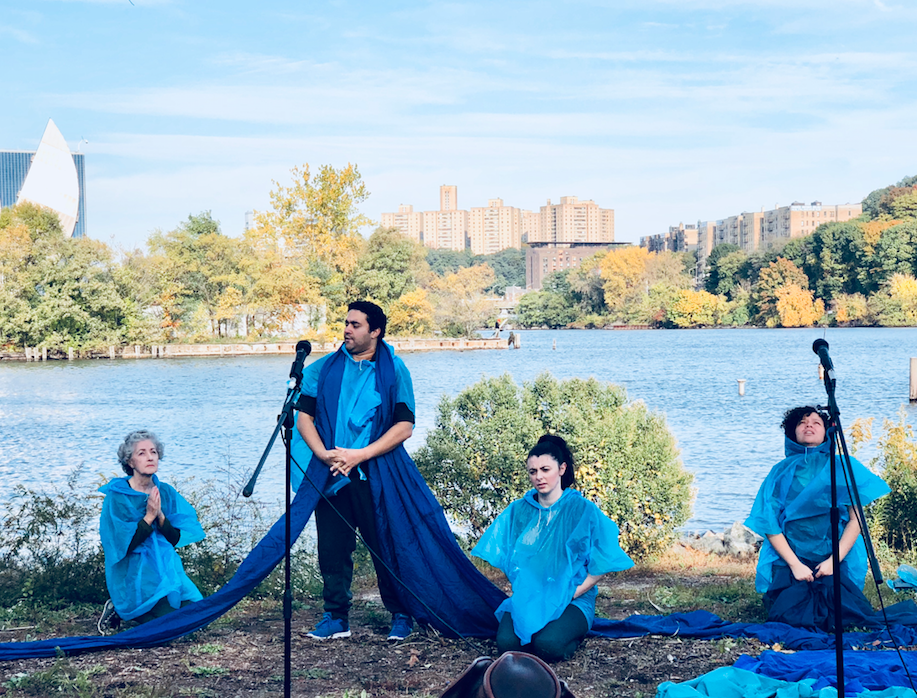 The Sherman Creek Park performance of This Sinking Island. Photo by Melissa Moschitto.

These nameless characters represent the 26.4 million people around the world who are forced to leave their homes due to floods, hurricanes, earthquakes, droughts, and other natural disasters. Despite it being 2019, international governing bodies have yet to change the terms stipulated in the 1951 Refugee Convention, which only grants refuge to asylum seekers based on racial and religious persecution or when dissident political views threaten their lives. In other words, governing bodies like the United Nations did not anticipate that global warming would create a whole new category of refugees, and the requirements have never been updated.

As an investigative devised theatre company that draws upon found texts of news stories, the Anthropologists were inspired by the testimonies of climate refugees from Puerto Rico, Fiji, Efate Islands, Staten Island, Pakistan, Ethiopia, and Syria, because they convey a universal story of hardship and longing for home. This struggle was brilliantly presented through Rivera’s powerful monologue delivered entirely in Spanish, which serves as the culmination of the first half of the production. The words came from his uncle’s hardships during Hurricane Maria in Puerto Rico in 2017.

While the first half of This Sinking Island is rooted in our contemporary present, the second half takes place in Washington Heights at an unspecified future date, when Earth is two degrees warmer than now and plastics have been banned. In order for New Yorkers to not re-experience the flooding and power outages that occurred in 2012 with Hurricane Sandy, precautions such as building green roofs that absorb water and freeboards that raise properties two feet above flood level have been put into effect. This half of the play follows a family of three sisters—Dar (also Winant), Edy (Kimberly Gomez), and Fen (Katherine O’Sullivan)—who are forced to flee their home and are planning to head to Canada.

The nameless characters in this scene are climate refugees, and the blue fabric, fluttering like a butterfly, represents rising sea levels. 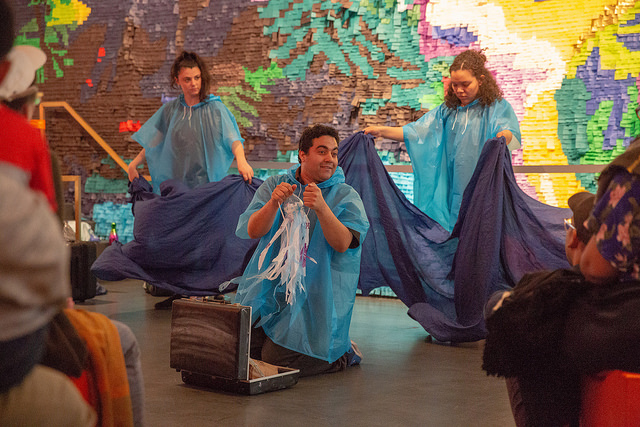 The Anthropologists unite young and old audiences through the educational lessons their shows impart. When the performers in This Sinking Island enter the stage at the 26 October performance at the YMHA and YWHA (the YMCA equivalent in the Washington Heights neighborhood in New York City), they are wearing dark-green T-shirts with different continents strewn across all of them, evoking the prehistoric supercontinent Pangea, as well as foreshadowing the migration of a refugee covered in plastic, Gully (also Rivera), who crosses paths with the Washington Heights family.

Role-playing is at the forefront of This Sinking Island. Director and playwright Melissa Moschitto was inspired by the current courtroom proceedings on the US-Mexico border, where children engage in role-playing games to mask their pain of losing their parents. This is reflected in the scene where the eldest daughter, Dar, chastises her younger sisters for masking their fear of leaving home by pretending to be mermaids. At the same time, Dar encourages them to root themselves in reality by learning the rules of border crossing and how to interact with patrol agents for when they arrive at the Canadian border. The audience also takes part in a kind of role-playing. It is at the culmination of the production, when the audience is encouraged to enter the stage and cross the blue fabric themselves, that they feel the most compassion towards the climate refugees. The transition from spectator to actor provides a kinesthetic form of empathy for the refugees by literally putting the audience in their shoes.

The Anthropologists succeed in theatricalizing their scientific research about climate refugees with help from Irina Kuraeva’s costumes and Mariah Freda’s music. Kuraeva’s designs illustrate the gravity of climate change and the importance of recycling. Young audience members with ripe imaginations were transfixed by the image of a jellyfish, which was brought to life through a plastic bottle (its body) and ripped plastic bag (its tentacles). By incorporating plastic container tops and CDs on Edy’s clothes to serve as mermaid tails, Kuraeva also conveys how the plastic epidemic affects the sea, as the material is not biodegradable. In terms of music, factual information and societal commentary was woven into original songs written by Freda; one of the song’s lyrics was: “73 percent of fish swallow plastic / because our trash has become their snack.” With this, the Anthropologists are elaborating on the traditions of Augusto Boal’s newspaper theatre, which is the first technique of Theatre of the Oppressed.

It is at the culmination of the production, when the audience is encouraged to enter the stage and cross the blue fabric themselves, that they feel the most compassion towards the climate refugees. 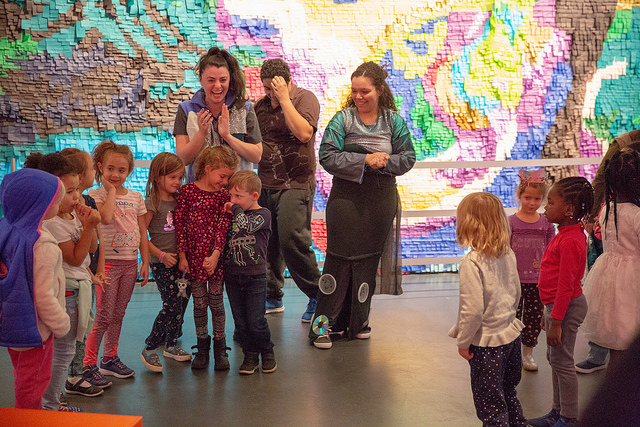 Through talkbacks and lobby displays about the effects of global warming, This Sinking Island offers solutions to global issues, transforming engaged theatregoers into vocal citizens. In one of the conversations, an audience member illustrated the link between our military industrial complex and environmental movement: America is fighting wars in the Middle East over the resource of oil, which contributes to the manufacturing of plastic, which is used in the manufacturing of weapons. Another woman explained how she made the conscious choice to avoid plastic cutlery entirely and demonstrated how to use the metal device she carried that combined a fork and spoon on opposite sides. For those in the audience unfamiliar with how to be more eco-friendly, sea shells with environmental advice—such as buying food with less plastic, using less hot water, and recycling clothes—were displayed on a map of Manhattan, helping these individuals make their own pledges before leaving the theatre. The production’s creative team also made their own low-impact pledges to protect the environment.

Since the number of climate refugees continues to rise annually and politicians continue to ponder how to incorporate climate refugees into new legislation, This Sinking Island couldn’t have been timelier. Moschitto hopes to present the show in government buildings, which would allow both the artistic creative team and policymakers to work towards solutions together. And since the rising sea levels will impact the younger generations the most, Moschitto also intends for the production to be made available to as many school groups as possible. The playful nature, brevity, and somewhat didactic approach of This Sinking Island is ideal for academic settings. And while future audience members may not share the experience of seeing the play performed in the milieu it is set in, they will be engaged in finding solutions to the environmental concerns plaguing their own communities.