Recommended
Devising Our Future
HowlRound Theatre Commons
Most Discussed
Naming the Trope: A Deep Dive into the Harmful Uses of Disability Stereotypes in the American Theatre
Ben Raanan
Most Watched
A Conversation About the Making of Addressless
Tuesday 11 January 2022
Upcoming
Livestreaming a Convening: The Ellen Van Volkenburg Puppetry Symposium
Saturday 22 and Saturday 29 January 2022
Essay by
Patrick
Gaughan
Andy
Field

An Interview with Andy Field of Forest Fringe

“Live Arts?! Isn’t that just lazy theatre?” says London drag performer Scottee, deadpan, just before his blue sequin mumu falls to the floor. Jenny Hunt, half of the performance duo Hunt & Darton, skitters in, joining Scottee on the makeshift, temporary stage: a wooden rectangle with vertical gold streamers hung as a backdrop, deliberate vaudevillian camp. Hunt, in a floral print dress and pineapple hat, tells the audience her partner can’t make it tonight. She holds a matching dress and pineapple hat in her arms and raises an eyebrow. 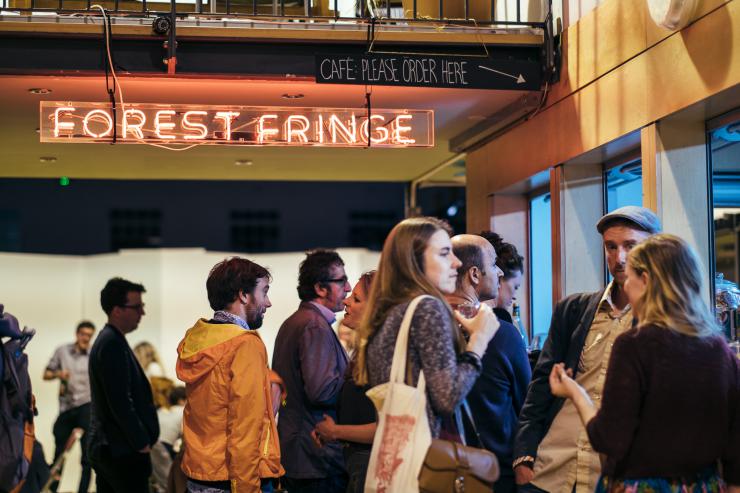 It’s the Forest Fringe opening night party at the Biscuit Factory in Leith, Scotland and I’m standing in the back with Andy Field, co-curator of this festival within a festival. Field’s two weeks of free, grassroots artist-led programming has begun, with companies such as Action Hero, Eggs Collective, and Made In China slated to perform. In its ninth year, Forest Fringe’s reputation rivals the established, commercial venues of the Edinburgh Fringe Festival across town, though its offerings are not listed in the official Fringe catalog. This steady growth has led to Field and his partners, Ira Brand and Deborah Pearson, hosting programming in New York, Beijing, and other cities around the world. Field attributes their success to investing in a core group of committed artists. So many contemporary venues, companies, and festivals vie for sustainability and longevity that breeds a dependency on box office. Forest Fringe has chosen to embrace the temporary, the irrationally unsustainable: admission is free.

Your whole enterprise seems based on a completely irrational proposition: show great work for free.

Scottee takes the mic: “Please welcome Andy Field, the Jim Broadbent of Live Arts to the stage.” Hunt extends the dress and the pineapple with a chinstrap towards us. “I don’t believe this,” says Field, and begrudgingly walks towards his costume, through a tide of applause. 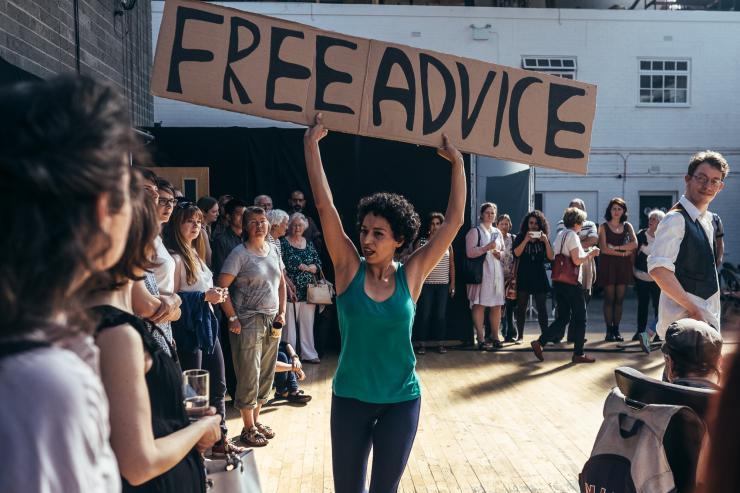 Patrick Gaughan: How is that possible? You have so much stuff lined up!

Andy: Maybe I’m not disorganized. Maybe it’s that I enjoy short-term-ism. On a day-to-day level I’m organized, but I’d be a terrible director of a big organization that needs to plan five years in advance. I’d drive it over a cliff. I’ve always liked solving problems as they arise, whereas Ira (Brand) foresees the problems that might arise and avoids them. Prevention rather than cure. I’m all about cure. But there’s much more vanity in cure than in prevention.

Patrick: Does that curing impulse relate to what you’ve seen in the larger Edinburgh Fringe Festival community?

Andy: Part of Forest Fringe in the early years was a frustration in response to some of the tangible constraints other venues placed on artists. They’re most efficient at making money for the people who run the venue. As an artist, you have fifteen minutes to load in and if you go a minute over they charge you by the minute, while the company that’s coming in stands with their arms folded. It’s divide and rule. It’s hegemony in praxis.

Patrick: That creeps into my experience as an audience member as well. For instance, Pleasance Courtyard freaks me out. I was queuing for a show and felt like I was waiting in line at Disneyland. Especially with those little characters on the totems.

Andy: As the central venues gravitate closer together, it starts to resemble that kind of oppressive, coherent environment more and more.

Andy: Your high-end, bourgeois beef tent with grass-fed sausages—it’s like a casino.

Patrick: On the other hand, your whole enterprise seems based on a completely irrational proposition: show great work for free.

Andy: There’s something positively subversive about that idea, right? A few years ago, we had this artist Lucy Ellington perform one minute manifestos. While the audience was waiting to queue to go into the main space, she picked five people to perform a one-minute manifesto about something they believed in. She timed it, and would blow a horn at you at the end. Such a pointless but beautiful thing. I wrote one called The Gift Manifesto, “a guide to radical giving,” which applies to Forest Fringe. It’s not about balance and exchange. It’s about unsustainable, improbable generosity. 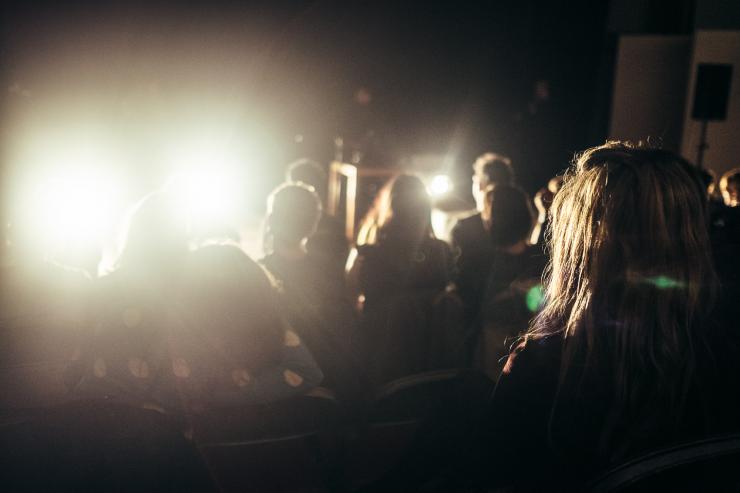 Patrick: Giving without expecting return subverts the whole capitalist showbiz structure. If an audience member pays forty pounds for a show, they demand five stars. They want to be moved and changed. A festival like this can help to alter those preconceptions, our ideas about entertainment exchange value. Is that idealistic?

Andy: Yes, but I think as we get older, there’s more savvy pragmatism that tempers that naivety and optimism. Most people who come to Edinburgh to put shows on don’t expect to make money. If they’re lucky, they break even. So there must be other value implicit in being in Edinburgh. All we’re attempting to do, and here’s the management speak version, here comes the Powerpoint—

Andy: All we’re attempting to do is minimize the costs in and out in order to ignore the financial element, in order to completely focus on building relationships and having a nice time. Too often, companies get distracted by the need to make enough money to not go home completely broke, but if you’re flyering people on the Royal Mile six hours a day, you’re not seeing other artists’ shows or talking to interesting people.

I meet with Field the afternoon before Forest Fringe opens to the public, at Out of the Blue Drill Hall, the festival’s primary home since 2012. He puts a conversation with an artist on hold to talk with me. At another point, we’re interrupted by a local carpenter who needs Field’s advice on installing a photography exhibition by Palestinian artist, Hamde Abu Rahme. Outside of the Drill Hall, many off-site performances are taking place, including a devised piece that fills a nearby warehouse basement with coal.

As Field and I walk by, co-curator Ira Brand and a group of volunteers are painting benches black in the lobby. She stops Field, her face distressed, to get his take on their progress. “They don’t need to be the very best,” he says. “They’re definitely not going to be the very best,” she replies. Field smiles. “People’s asses are going to be on them anyway, so as long as they’re mainly black, we’ll be fine.” He takes a beat and looks back to me. “There’s a lot of making through doing at Forest Fringe.” 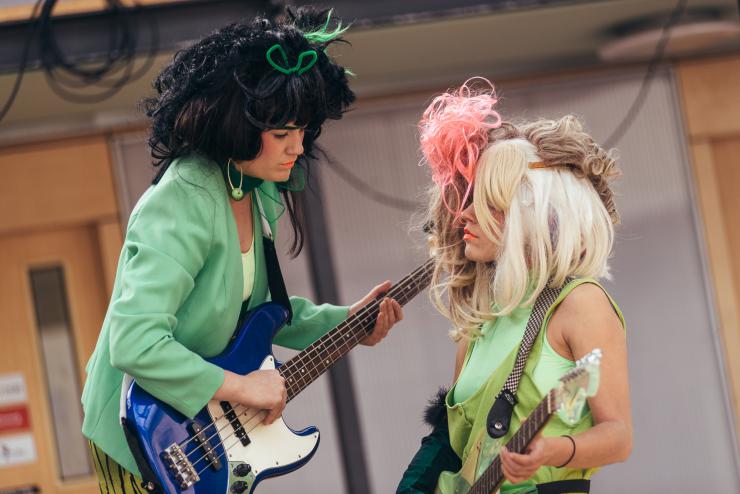 Patrick: You’ve done this for nine years, mostly with the same core group of people. It feels like you’ve built a functional community.

Andy: Forest Fringe is unusual because it’s a grassroots artists-led community that’s not defined geographically. Often, artist-led projects start with geographic proximity; a group emerges that makes use of one venue, one physical place.

Patrick: And those communities can feel like islands unto themselves. My experience in New England and New York is that many of these communities feel disparate, whereas your scene in the UK seems to be thriving with so many small companies who tour regularly. It seems like Forest Fringe is a central part of that.

Andy: In many ways, uniting the communities is the goal. So we’ve met with Brian at The Chocolate Factory in New York and been to CounterPulse in San Francisco and their equivalents in the UK, and work with an amazing company in London called ]performance s p a c e[ and a community called Residence in Bristol, but because Forest’s community convenes only for the Edinburgh Festival, its strength is its temporariness.

Patrick: Which is possible because there’s very little year-round maintenance, no central location.

Andy: Yes, and artists are not necessarily defined by their relationship to Forest Fringe. There are people who are part of Residence in Bristol who are part of Forest, and people who are independent and enormously successful in other fields, like Tim Etchells for example. Their relationship to Forest Fringe is not definitive, or consistent even, but you put the bat sign on, like in the Batman movies, and people come and it becomes what it needs to be for that given moment. What you have is a grassroots peer-to-peer community of artists that is completely geographically dispersed. When we start to put the program together for Forest Fringe, I send an email out to two hundred artists who we know in different parts of the world, and they come back and say “I’d be interested in doing this,” “There’s this project I’m working on,” whatever. And whenever we as curators need help with something, we just ask.

In many ways, uniting the communities is the goal... because Forest’s community convenes only for the Edinburgh Festival, its strength is its temporariness.

Patrick: So when you’re talking about this core two hundred artists you’ve accumulated, how many of the shows on this year’s bill are drawn from that pool?

Andy: It’s hard to say. We’re thinking more about artists and less about shows. We’ve had Action Hero put on something every year since 2008. They’ve been to Texas and Bangkok and Madrid and Athens and all these places with us. They have this enormous sense of ownership over Forest Fringe. There’s a group of about eight or nine artists who are an intrinsic part of it, whose work we make space for.

Patrick: And that loyalty keeps the tenuous system going.

Andy: And as myself and Debbie and Ira became a more intrinsic part of a community that extends far beyond Forest Fringe, a community of independent international artists who run the gamut, it’s become much more informal. There’s the danger of not wanting to be a clique, but sometimes clique-iness can create intimate, supportive environments. And no one’s earning any money, so you might as well be having a good time with friends.

Criticism
Festivals
Interviews
Organizational Models
United Kingdom
Most Discussed
Naming the Trope: A Deep Dive into the Harmful Uses of Disability Stereotypes in the American Theatre
Ben Raanan
Most Watched
A Conversation About the Making of Addressless
Tuesday 11 January 2022
Upcoming
Livestreaming a Convening: The Ellen Van Volkenburg Puppetry Symposium
Saturday 22 and Saturday 29 January 2022