One of the several ironies of Trump’s attack on Hamilton is that the musical has been praised by people left and right since the beginning—yes, Barack and Michelle Obama, but also Dick and Lynne Cheney….and indeed by the person Trump was supposedly defending, Vice President-Elect Mike Pence, who said several days after he attended that it was “an incredible production” and “a real joy to be there.” 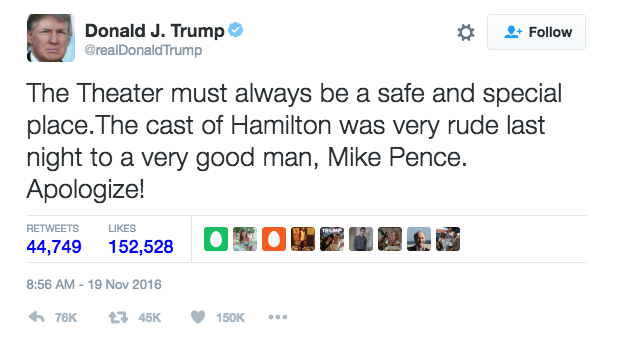 Yet, the audience at the show when Pence attended reportedly applauded loudly at George Washington’s line “Winning is easy, young man; governing is harder,” and actually gave a standing ovation when Hamilton and Lafayette said: “Immigrants, we get the job done.”

What I suspect is that it wasn’t only Pence’s attendance that altered the audience’s reaction to Hamilton; it was the election. I say this because my own perception has been altered remarkably at nearly every show I’ve attended since November 8—and I’m clearly not alone.

This began in a way on election night itself, when I saw Women of a Certain Age, the third and final play in a trilogy by Richard Nelson entitled The Gabriels: Election Year in the Life of One Family. This third play both opened, and was set, on election day 2016, with the playwright reportedly updating it that very afternoon. All three plays were set on the day they opened, and involved the Gabriel family of Rhinebeck, New York, preparing a meal, and talking about their lives and the world around them. As with Nelson’s two previous plays, the characters hardly mentioned Trump at all, his name uttered exactly once in each play. I figured the playwright had his reasons for doing this after the first two plays, even though it seemed an especially odd choice for the first play, Hungry, which was set in March shortly after Super Tuesday and the infamous Republican primary debate where Trump talked about the size of his penis. On election night, however, when I myself was so anxious about the outcome of the voting, I was no longer willing to give the playwright the benefit of the doubt; I was exasperated by the characters’ apparent indifference to what was happening that day, their conversation barely touching on the election.

The next night, in shock at the results, I saw a revival of Athol Fugard’s 1982 play about apartheid in South Africa, “Master Harold” … and the boys. It struck me that, had I seen it a few nights earlier, I might have appreciated it primarily as a well-wrought work of theatre, relegating its depiction of the brutal effects of state-approved racism to a safely distant time and place. But now the play felt more like an urgent warning.

There are shows I’ve attended since November 8 that consciously stimulate a post-election perception. Near the end of Party People, a show by UNIVERSES that is about the Black Panther Party and the Young Lords fifty years later, one former Black Panther says:

The Party was a continuation of the first slave uprising, and we are still fighting that fight! It’s my only fight. Why do you think that the FBI and the CIA unleashed their dogs of war on us. Why do you think Donald Trump is the president? This country has never wanted us to be free.

At the curtain call for Homos, or Everyone in America, a new play by Jordan Seavey that looks at a gay relationship from 2006 to 2011, the play’s co-star Michael Urie made the case that its central event of a gay bashing is suddenly more relevant. He cited a statistic by the Southern Poverty Law Center that there were some 700 “hateful incidents of harassment” within a week after the election.

It is too soon to know how, or even whether, perceptions will be permanently changed, or whether theatre will be at the vanguard of protest and resistance against the new regime.

Similarly, the musical Allegiance, about the Japanese-American internment during World War II, takes on new urgency, as its star and inspiration George Takei made clear in an essay in the Washington Post on November 18: “They interned my family. Don’t let them do it to Muslims.” (The show is no longer on Broadway but a video of it is set to be shown in movie theatres across the country on December 13.)

But there need not be anything so direct on stage to trigger an election-related response. Even the Broadway production of Natasha, Pierre and the Great Comet of 1812, which takes place in nineteenth century Russia, had unexpected reverberations, starting with the slogan on the marquee: “Are you ready to wake up?” I was more conscious than I had been in the two times I saw the musical Off-Broadway that it takes place in an authoritarian society during wartime. And there seemed an extra layer of meaning and emotion when, after Natasha breaks off her engagement to Andrey, with plans to run away with the married neer-do-well Anatole, Natasha’s cousin and best friend Sonya sings:

A couple of weeks ago, in accepting an award, Leigh Silverman, the director of the current Off-Broadway production of Sweet Charity, a frothy fifty-year-old musical about a dance hall hostess looking for love, observed that “art helps us to escape….People staggered into Sweet Charity all weekend desperate for community, catharsis, and to be lifted away from this reality.” She added: “But art has and will always be a tool for education. And revolution. And resistance. We must use our art to make our community impenetrable from what seems like inevitable attacks to come.” It is too soon to know how, or even whether, perceptions will be permanently changed, or whether theatre will be at the vanguard of protest and resistance against the new regime.

In an intriguing essay in the Globe and Mail, Russell Smith points out that previous periods of societal conflict haven’t always produced explicitly political art—or at least the protest art wasn’t what made the most difference. Rather, movements from Romanticism to surrealism to Conceptual Art, forged during anxious and oppressive times, went inward and abstract, creating new forms of art. (I’ll add absurdist theatre.)

“Is art such as this—art concerned with form, or with art itself rather than an objective world—cowardly, in the face of oppression? Is it a retreat from social responsibility?” Smith asks—and answers: “No, it isn’t. Because it isn’t, actually, apolitical: Everything is political. Avant-gardism in art makes people see the world differently and has always been associated with a dissatisfaction with conventional thinking generally.”

Theatre artists have begun to mobilize. The newly formed Broadway Advocacy Coalition, organizers of the “Broadway for Black Lives Matter” concert and conference in August, has organized a new free event for December 4 entitled “The Invitation: The American Hangover” (“Tough week? Let's get through this together!”), part of what they plan to make a monthly series.  Playwrights and artistic directors in theaters across the country have responded in American Theatre magazine (part 1 and part 2) to the question: What can theatre do? Hartford Stage Artistic Director Darko Tresnjak: “The time has come for merciless stage satire.” Playwright Amy Herzog, quoting her grandparents: “Don't mourn, organize.” Goodman Theatre Artistic Director Robert Falls, quoting Stanley Kubrick; “However vast the darkness, we must supply our own light.”

Could the Trump Effect mean that theatre will matter more to more people than it has in a long time?

In the meantime, as others have pointed out, even the most commercial, long-running shows seem packed with new meaning, and new force: Kinky Boots celebrating the queer community, Fiddler on the Roof lamenting the history of violence against a minority, On Your Feet standing up against anti-immigrant prejudice, with a monologue by immigrant Emilio Estefan ending: “This is my home. And you should look very closely at my face, because whether you know it or not… this is what an American looks like.”

And then there is Hamilton, which had already generated more publicity than any other work of theatre in a generation (with the possible exception of Spider-Man: Turn Off The Dark), before its curtain speech addressed to Pence provoked the Twitter attacks by the President-Elect. Many people weighed in—theatre people who don’t usually discuss politics; political people who don’t usually discuss theatre.

Could the Trump Effect mean that theatre will matter more to more people than it has in a long time? And will that help theatre in America resist the turn toward authoritarian repression that has been happening elsewhere in the world?

When the Playwright Has an Agenda
Jonathan
Mandell
Essay

When the Playwright Has an Agenda

Jonathan Mandell takes on two recent plays based on real events, considering productions of Ferguson and The Siege.

Jonathan Mandell runs down the recent past and present dramatization of dystopian novels on stage, including 1984, and asks whether what’s on stage is reflected in the political era that we are in now.

I hope is that theatre will be a safe space for those marganilized, as it has been. If I have to hide somewhere, I'd hide in the theatre.

To make this sound more positive: As playwright Sarah Ruhl put it last month at Lincoln Center in accepting an award," Find each other. Don’t sit in your own room. Find the common room, which is called grace, which is called a theatre." (Full transcript of her speech is up on Howlround http://howlround.com/findin...

Well put. I'd also suggest making an honest effort to understand why many life-long progressive democrats (such as Susan Sarandon) couldn't bring themselves to vote for Hillary, even if it meant Trump winning. It might inspire you to help make the best of the current situation (by, for instance, trying to get woman such as Tulsi Gabbard appointed to positions), and thereby perhaps (perhaps!) eventually make things not so bad after all.

I'm not sure what this has to do with my article, which is about the way the election has changed perceptions in theater, among theatergoers and theater artists. But in response, here is an article by Lucia Graves in the Guardian. Most pointed paragraph: "Whatever your opinions about Clinton, the most progressive Democratic platform in history was on the ballot with her; any Bernie Sanders supporter worth their salt should’ve been able to see that. If they cared about progressive policy they would have bothered to show up."https://www.theguardian.com...