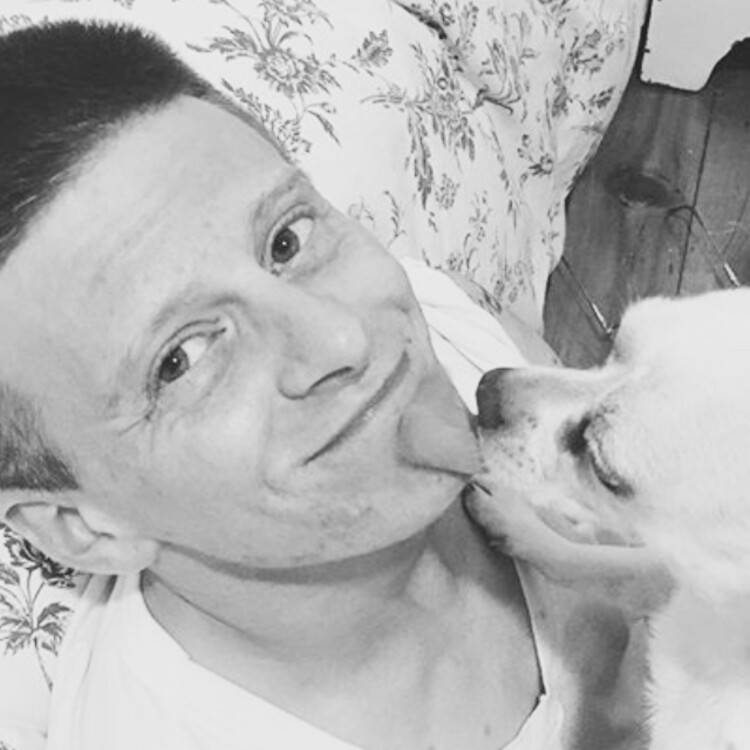 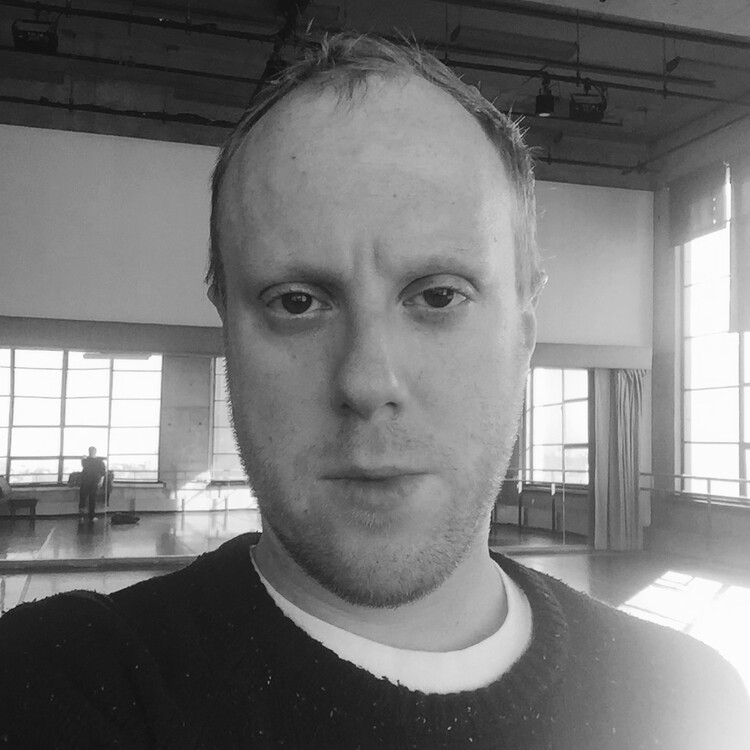 My Old Man (and Other Stories)

Collaborators Jess Barbagallo and Chris Giarmo have been creating work together for a little over ten years, since they met as students at NYU’s Experimental Theater Wing. As card-carrying queers trained in dance and devised theatre methodologies, Chris and Jess have attempted to forge an aesthetic that borrows from straight avant-garde practice and gay theatrical innovation. Here they make preparations for Jess’s new play My Old Man (and Other Stories), which opened at Dixon Place in October 2016. My Old Man… functions like a short story collection concerning two hapless roommates in a dilapidated apartment complex—Barry (Drae Campbell) and Andrea (Emily Davis)—and the lovers and friends who visit their home. This conversation highlights the practical questions of making theatre, while addressing an increased public interest in the category of “trans artist.”

Jess Barbagallo: I guess the first question I have for you is: should I paint the floor at Dixon Place?

Chris Giarmo: Maybe do some splatter painting? So the scuffs of Emily’s heels don’t visually distract.

Jess: I think there will be multiple sets of heels in the show. Which makes me wary of Pina Bausch. Also, I don’t have the luxury of design carte blanche. I get one color choice, that’s it. No creative floor patterns.

Chris: Then paint it something easy and dark. Ooh. What about navy? Also Pina Bausch doesn’t own “heels.” She does own heteronormative whimsy though, so be careful.

Now that I am more adamant about using a gender pronoun I wasn’t assigned at birth, now that I have surgically altered my body, now that I use hormones, I feel this real interest in my person, but not in my practice/s. If I’m this explorer-artist who is making life choices that not everyone in this life will make, then it seems like I should want to report my findings, right? But I’m wary.

Jess: I love you getting ruffled about heel ownership, as a drag queen. I was thinking of grey ‘cause I thought it might look good with yellow spike tape at the corners. The color palette that emerged from the photoshoot was purples and golds. Bizarre and royal.

Chris: I feel like you’re on to something with the yellow contrast. It references a kind of construction theme. I just worked on a big project at Lincoln Center and in the creative process the word “scaffolding” was thrown around a lot. They were interested in the structure of the piece being revealed and not kept secret. I think that same kind of thing has always applied to your work. I think I was saying something like this to you before, but the “magic” of your work already exists in the text, characters, play, etc. It doesn’t need magical staging or design to bring it to life, but is instead aided by practical functionality. So you’re set designing this show?

Jess: Yes. But Elliott [Jenetopulos], the lighting designer, and I haven’t explicitly talked about the separation of our roles yet. Elliott said something funny on the phone after reading the script: “I’m not a theatre scholar, so I don’t know what it all means.” I was recently reading a James Wood profile of my big inspiration, short story writer Joy Williams, in the New Yorker and he talked about why she was difficult for him. But all the reasons she seemed difficult, her obscurity primarily, are the things in her work that function like a straight shot to my heart.

Chris: Do you think that your work has gotten less “hard-hitting” over the years?

Chris: I’m interested in the small detailed answers to questions that performance can provide versus the kind of meaning of life stuff.

Jess: What is a question that you think can be answered?

Chris: I think there can be many questions both large and small that one play can deal with. When thinking of My Old Man: “Who owns narrative?” “What does a fifteen minute break mean to you?” “What’s the purpose of using your past to make other people feel things?”

Jess: These questions are really generative as directing prompts! “What does a fifteen minute break mean to you?” Like suddenly you have a situation where the actor is actively engaged in checking her watch as the task of the scene. There is a pressure to be relaxed. Breaks are like jokes.

Chris: I think the concept of a “break” is a cool place to start thinking of this whole piece. In some weird kind of abstract sci-fi way, in the end we might learn that we’ve been on a break from our lives as we’ve been watching it. I guess that’s kind of what all theatre is.

Jess: Yeah. I’m really trying to appreciate that “break” more as an audience member. Watching TV doesn’t do the trick for me.

Jess: It’s just one more thing coming across the screen. But the screen always means more work. I don’t know when this switch happened in me because I used to love TV. I used to feel like characters were my friends and I had this gift of going on a journey with them. But television characters don’t feel like my friends anymore. I wonder if it’s me or the culture.

Chris: It’s a combo. And I think it’s being an artist. Like we call our art our “work.” But I think that culture as a whole is so inundated with ways to “not-work”—media to absorb, things to consume—that we still feel like consuming them is a job.

Jess: Yes! Like looking at links to things. It’s something I don’t want to bring into the rehearsal room. No more things that someone else did that I have to copy. But I still lean into the associative rabbit hole as a generative model.

Chris: Annie-B [Parson of Big Dance Theatre] talks about the “artist” in that way in her lecture “The Virtuosity of Structure.” She talks about the artist looking at all the possible things in the world and choosing from that infinite catalog of possibilities—putting chaos in order. She calls this act of choice “the artist’s voice.”

Jess: I like that this is emerging as our illustration of what queer artists talk about. I was just saying to Rel on the phone: “We don’t just talk about being queer!” Part of this staged interview with you is my attempt to address this curiosity about my “transition”—a word I quote because it has been such a long and evolving process that one word doesn’t really encapsulate it—and how it’s affecting my relationship to the arts. Now that I am more adamant about using a gender pronoun I wasn’t assigned at birth, now that I have surgically altered my body, now that I use hormones, I feel this real interest in my person, but not in my practice/s. If I’m this explorer-artist who is making life choices that not everyone in this life will make, then it seems like I should want to report my findings, right? But I’m wary.

Chris:I think the question to ask is, “Would I even think twice about the validity of sharing my experience if I were a cis het man?”

Jess: When I was identifying as a butch woman, I felt no curiosity about my identity or experiences from mainstream heteronormative culture. This passing or crossing over gives me some kind of cultural cache I did not feel afforded before. Is it only that people are ready to listen now?

Chris: I don’t think “ready” is the right word. As trite as it sounds, “woke” seems to be more accurate. I just watched a video from Kat Blaque in which she talks about not identifying as queer at all because she’s a straight trans woman who reads as cis. The gist is labels are only semi-useful in basic conversations. But that’s the problem. That’s often how far the conversations ever get. My favorite relevant example of this is Macy Rodman’s Instagram account “caitupdate.” She uses Snapchat’s face-swap technology to put Caitlin Jenner’s face on her own and give the most boring life updates.

Jess: As we would say at my job [as a researcher at Us Weekly], “They’re just like us.”

Chris: I’ve always been creeped out by that expression, but specifically in the way it seems that people need to be told the things that we all have in common.

Jess: Now I’m just thinking about how I need to subvert any strains of naturalism in my work at all costs.

Chris: I feel like your text already does that. Naturalism isn’t your default. Which is maybe the luckiest thing about you as an artist.

Chris: You’re the Alyssa Edwards of playwriting. She’s a drag queen who’s hilarious but has no idea that she is. You’re a radical experimental artist but you think you’re writing sitcoms.

Jess: I just wonder who needs them. I don’t want to make things for the future because that doesn’t seem like a useful way to experience the present. But will I keep making these oddities, gathering these groups of people, losing money and sleep in the process, as the form that my life was always destined to take? If the experimental theatre is not sustainable then what do our contributions mean?

Chris: It’s not about the future, it’s about the present. I’m making these curtains for my house because they will make the light coming through my windows softer and peachier. You’re making this play because the way you think about the things you’ve explored in it will forever be filtered because it exists between you and your experience now. Some people will come into my house and appreciate my curtains. And some people will go to Dixon Place and appreciate your play. And that appreciation may lead to inspiration, which might lead to someone’s life changing.