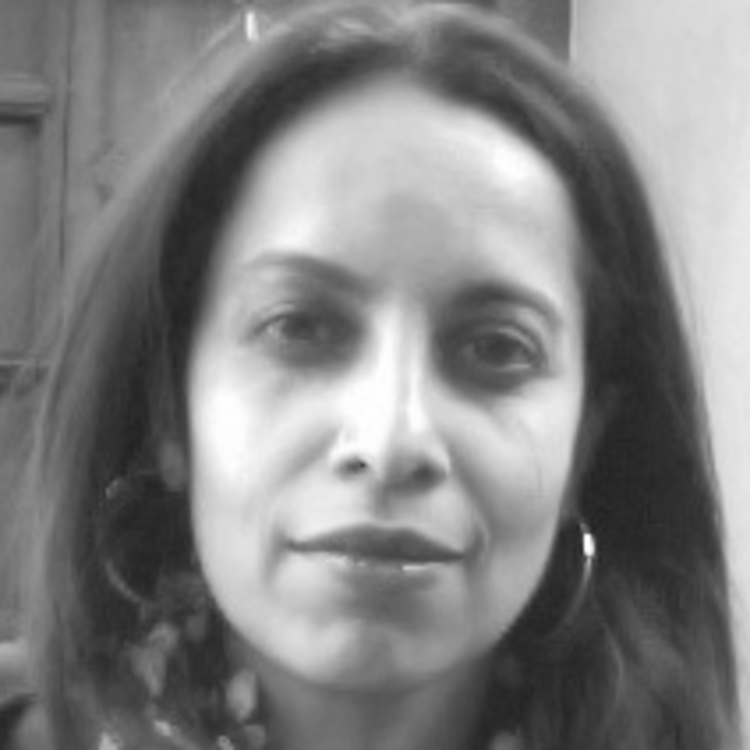 Dispatch from the Youth Theater Festival in Ramallah, Palestine—Part Two

It’s taken me some time to write about the end of Ashtar Theatre’s International Youth Festival (read Part One here). Since the final performances, three Israeli teenagers who had gone missing right when the festival started, were discovered dead; Israel blamed Hamas operatives, and a Palestinian teenager from East Jerusalem was kidnapped and killed by Israeli extremists in retaliation. All this triggered intense demonstrations by both sides, clashes between Palestinians and Israeli police for almost four days in East Jerusalem and rocket strikes between Israel and Gaza, leading to the current situation in which the death toll in Gaza is rising (as I write this it stands at 274 according to The Guardian; Ma'an News cites 298).

In a volatile, war-torn place, things change quickly and recurring issues of conflict, occupation, and survival dominate—all the more reason to have festivals like this and theaters like Ashtar that persist under such circumstances and create transformative experiences.

The final performances and the field trip we took to The Freedom Theatre in Jenin Refugee Camp linger vividly.

On The Road
We drive north through a landscape of olive trees, tapering pines, and valleys with white rock terraces. It is a beautiful day shimmering with heat, cool inside the bus. 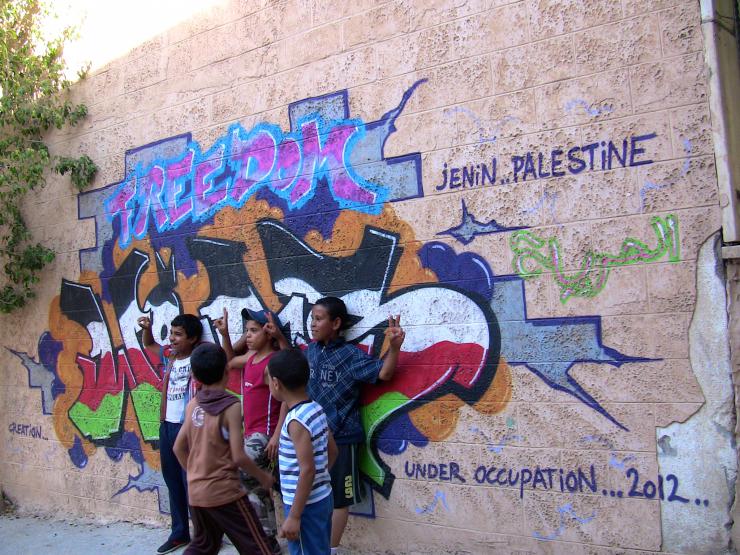 We pass Israeli settlements that you can spot from far away, clusters of red roofed houses side by side, in lines and squares. Settlements are considered illegal under international law—this explains the checkpoint towers and the presence of Israeli security forces. There is a maze of roads that give settlers direct access to their homes, but require Palestinians to take circuitous routes. We see olive colored military trucks with thick metal mesh enclosures. “To protect them from stone throwing,” says one of the Palestinian students, “the soldiers travel like this.” Every time you forget, something reminds you are in an occupied land. In the Jenin Refugee camp, you don't need reminders.

Entering the camp, the first things you see are blue signs of the United Nations Relief and Works Agency for Refugees (UNRWA). The camp is home to 16,000 refugees who lost their homes in the Nakba (as it is called here), the Catastrophe, which refers to the period following 1948, when the Arab-Israeli war displaced over 700,000 Palestinians. 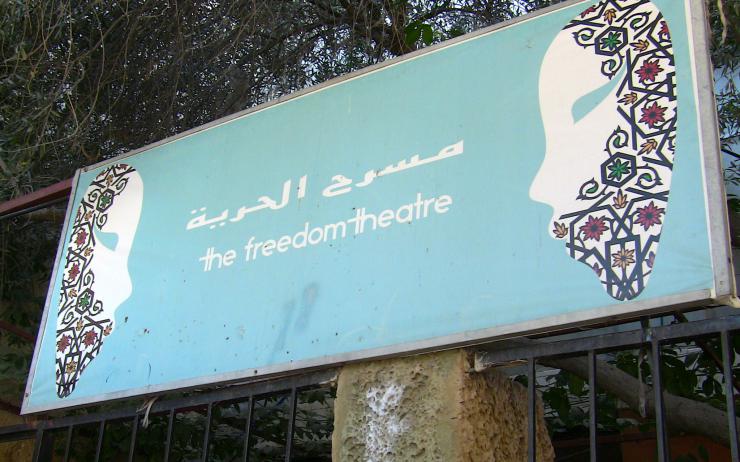 The Freedom Theatre, which is inside the camp, was founded in 2006 by Juliano Mer Khamis, building on the work begun by his mother Arna to give children a creative outlet in the late 1980s, during the First Intifada. Arna was born in Israel, married a Palestinian, and devoted her life to Jenin as documented in the film her son made about her work, Arna’s Children.

Two of the Ashtar festival participants, brothers Kamal and Salim, live in the refugee camp and work with the theater. Kamal has been helping with the children’s summer camp which started a few weeks ago—boys between the ages of nine and fourteen spend the day in storytelling, dancing, and group-building activities.

We are invited to see a performance in progress. “This play,” says the director Motaz Malhees, “is about their life and who they want to be. And they have been working on it for a few days now.” On the stage, six boys sit on desks facing away from the audience. 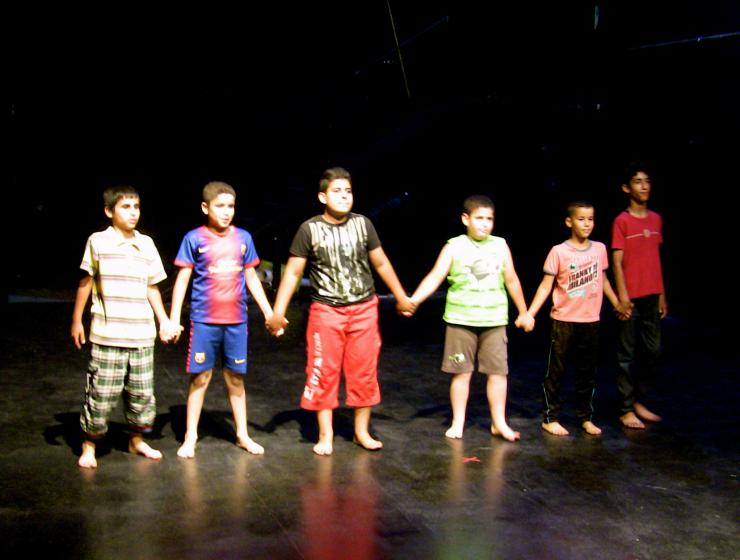 They write intently for a few seconds, rise, carry their desks to the side, run around, playing games then take  stances on different parts of the stage. They yell about the camp being attacked, run forward, mime throwing stones, huddle again, and form a line center stage.

“This is my dream,” one boy says. “I want to be a sailor and sail through the seas and challenge all the waves and everybody,” he stands on a chair and salutes. Another circles the group slowly as he talks. “I want to be a cook,” he says, “the best cook in the world, a cook who cooks all kinds of food and people will love to eat it.”

“I also have a dream,” says a third boy, “I want to become a blacksmith—a blacksmith who works with iron—and I will forge a plane and fly it all over the place.” In the end, the boys link hands and bow, shy at first and then as we clap louder, smiling.

Jenin has come to be known for its militant and cultural resistance—in April 2002 it came under siege by the Israeli Defense Force Forces and in the resulting clashes, about fifty Palestinians were killed. Young actors address this issue in the Freedom Theater promotional video that we also see. Before they started acting, they say, their dream was to die as shahids, martyrs.

“But after I started acting,” says one, “I began to consider living as a martyr, not dying as one.” 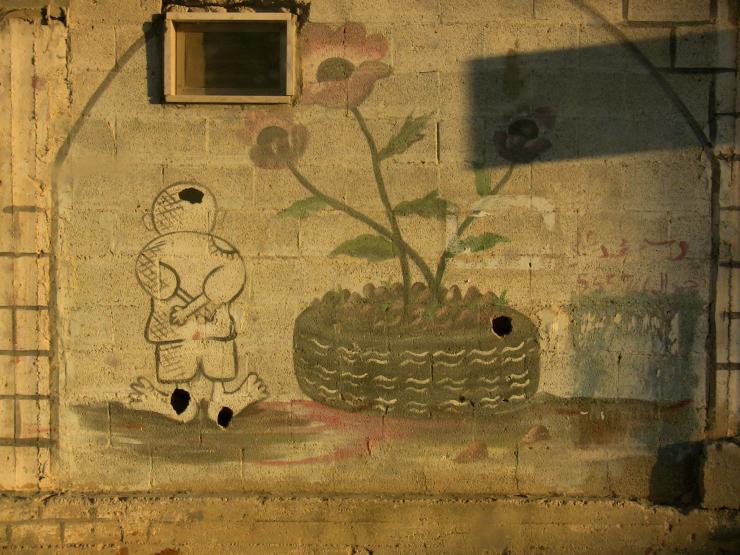 Finally Now
It’s an hour before curtain on June 28 and I’m standing, amid a steadily growing crowd, in the courtyard of Ramallah’s Ottoman Court. 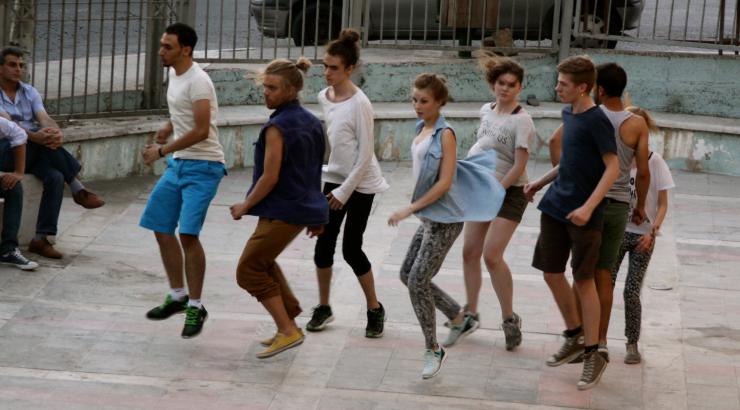 By 8pm, there are about one hundred people in the front courtyard of the Ottoman Court waiting for the festival’s final performance. The student dancers mingle with the audience, then stop abruptly and make small movements, directing the audience to one side of the courtyard, and taking their places on the other side. They begin with sudden stillness, and continue with sudden movements and fluidity, take the form of a protesting crowd, raise their arms, throw, fall back, retreat, regroup, jump, increase in power, and decrease in force.

In silence, the dancers move towards the audience, motioning them to join in, and for a few seconds, everyone is together, hands linked, stamping their feet in what looks like the traditional Palestinian dance, the dabke—when suddenly two uniformed men brusquely interrupt, take two of the dancers by the arm, and haul them up the stairs to the second floor balcony. Another actor, in the uniform of an Israeli prison guard, stands at the bottom of the stairs, guarding the entrance. The shock is palpable for a second, and then someone giggles, realizing that it is part of the performance. Everyone walks up to the second floor balcony in single file, past the guard who sometimes lets them pass easily, and sometimes not. 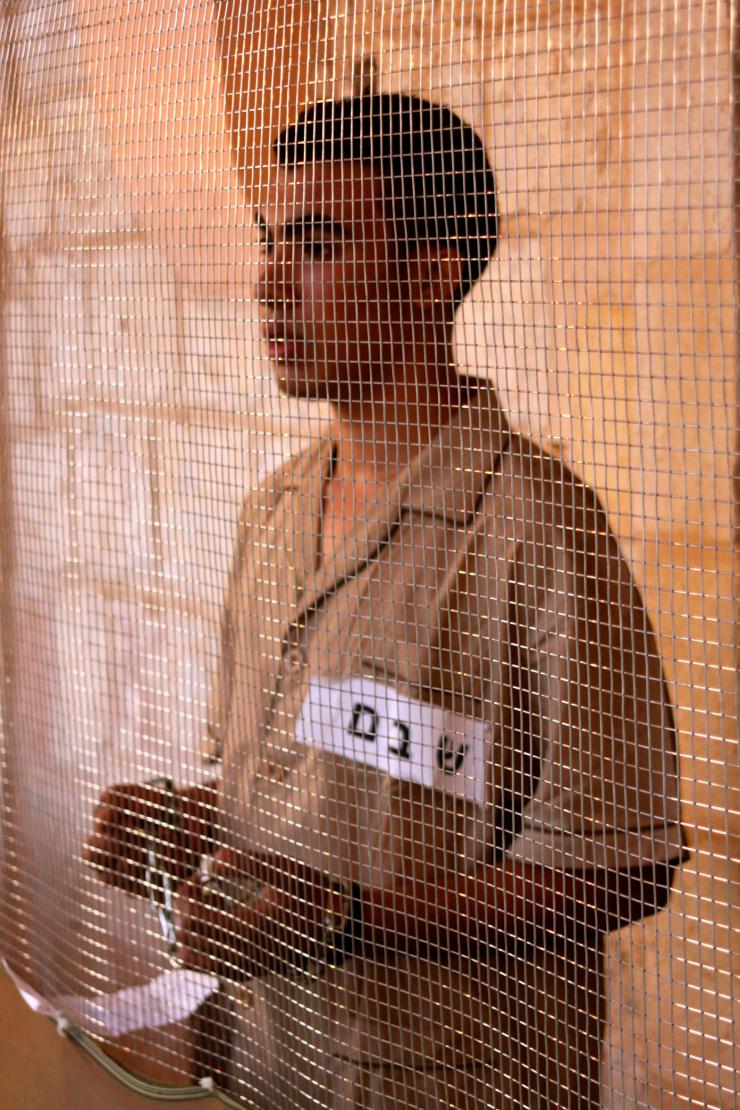 Upstairs we wait, crowding the balcony, a mixed audience—women with headscarves, children in shorts, expats, artists, international NGO workers, and government employees. The doors behind the mesh open and guards herd out three boys and one girl, dressed in loose prison garb. The prisoners begin speaking as if to relatives, their voices overlapping, asking if the demonstrations are making any difference, how things are on the outside.

A woman tells her fiancé, “Please, if you want to get married, get married. I don’t know how long I’ll be here but I’d like to see you happy.”

There are over 5,000 Palestinian detainees in Israeli prisons, some are political prisoners who have been jailed for years, while others are “administrative detainees” who can, and are, held for up to six months without Israel having to provide a reason. Every six months, their sentence can also be increased.

Abruptly, the lights go out. The prisoners are led back into the rooms. As the door shuts loudly behind them, a muezzin’s call for prayer sounds from a mosque nearby. A woman near me wipes her tears and everyone claps.

The event continues with the high farce of a Commedia dell’Arte performance and an installation piece featuring monologues about beauty, harassment and self-image. 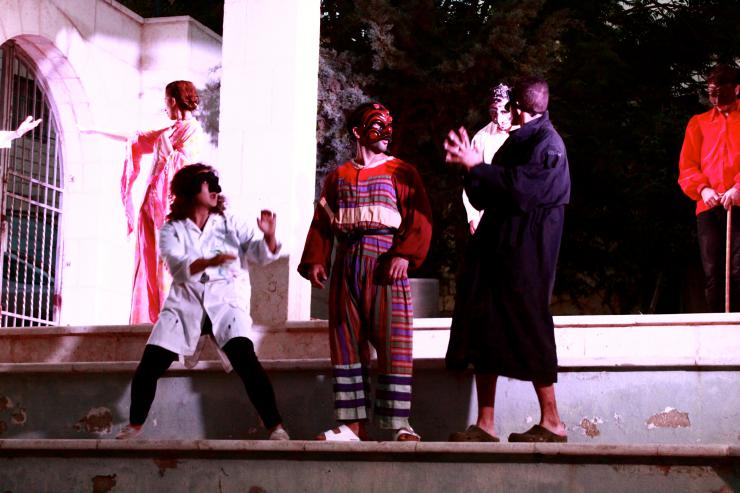 Later, when I catch up with the young coordinators of the festival, Émile André and Lamis Shalaldeh, they are still reeling. “I wasn't sure how it would turn out,” says Lamis, “but really, with this group, with what we did in ten days, it was a miracle.” “Before the festival, I would call myself very self-centered,” adds sixteen-year old Firas, “but now I feel so open. I got to know so many people, people here in Ramallah I didn't know before, not to mention Norwegians, and Germans, and Brits, and Americans.”

In a short video I put together quickly on the last day, the festival participants play around with the festival’s theme, “now has passed” with different gestures and deliveries. My favorite is the end when Waleed and George do a playful sequence in Arabic:

Please know that there are a great many of us, Jew and Gentile alike, who do not support Netanyahu's policies.

Alas, since (in addition to the republicans of course) prominent democrats such as Obama and (Hillary) Clinton and (Senator) Barbara Boxer do, and the mainstream media simply reports what they tell them to, most Americans do not understand just how unjust Netanyahu's policies are.

For instance, I doubt one in a hundred Americans realize that in five years of Hamas firing those cheap rockets at Israel, only 17 people have been killed. That hardly justifies the killing of nearly two thousand civilians (including almost five hundred children!) because there were (allegedly) rockets stored where they were living.

Furthermore, most Americans have no idea that the so-called "terror tunnels" have never been used for terrorism -- that is, killing civilians -- and have only been used to kill a handful of soldiers, as their primary purpose is to smuggle in food and other supplies to get around the unjust blockade imposed by Israel.

And, of course, most fundamentally of all, most Americans don't realize that most of residents of Gaza are refugees from areas that were taken over by Israel (in the late 40's or 1967)!

I feel certain that if most people know the basic facts of the situation they would be protesting our government supporting Netanyahu with billions of dollars in weapons and ammunition each year (including supply more ammunition recently to allow the massacre to continue). Alas, so many people think they can believe whatever the government tells them -- especially if it is someone like Obama or Clinton.

I pray you will survive. Alas, even if you do I know many others will not. I know it is of little consolation, but on behalf of a deluded society, I apologize for the United States' huge role in permitting the massacre.

I must echo the sentiments that there are a great many courageous Jews who are protesting the Apartheid-- even genocidal-- policies of "Israel" which has only gotten worse as the years have gone on.

The Constant breaking of international law by "Israel", the degrading and humiliating way that Palestinians are treated on their own land, waiting for hours at checkpoints, even ambulances waiting resulting in the deaths of Palestinian men, women and children. Women on their way being rushed to hospitals are stopped for hours, sometimes resulting in the deaths of their newborn babies.

And "Israel" gleefully keeps on demolishing homes, schools, hospitals, in its ever-increasing demand for land that is not theirs to claim. Without the Jewish state of "Israel" their would be no strife, no conflict, no hatred, no war. It is these "Israelis" that are convinced that they are somehow better than any "Race" on earth, and can simply exterminate an entire culture in their greed for land, always more land.

They build their illegal settlements on the hills, while the villages of Palestinians are cut across by a 25' high concrete wall, sometimes right across the middle of their village street. It should not be allowed to go on, and that is why the BDS movement has grown so prolifically; our voices ARE being heard around the world, and everywhere people are waking up to the dreadful situation in Palestine.

We are all Palestinian-- this is a human rights issue, and all of humanity is answerable.