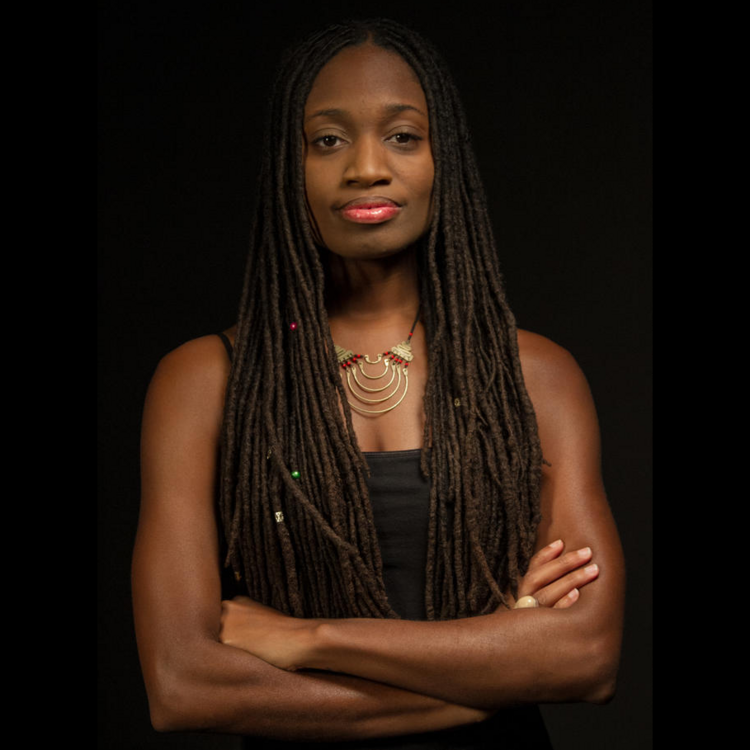 On Being a Black Playwright in the American Theatre

This article is adapted from a speech Aleshea Harris delivered at The 2020 Under the Radar Festival Professional Symposium.

So, years ago,
I am in St. Petersburg Florida
and I am seeing a play, a nostalgic piece
about the
good old days.
In the protagonist’s
good old days
there was, by his description,
an older woman
Black woman
large
with missing teeth
who loved Coca Cola
and took good care of him

Something in this young white man’s tone
there in that theatre in St. Petersburg, Florida
something about the twinkle in his eyes
as he speaks of
this woman
Black, large, lover of Coca Cola
Something about this troubles me
really gets under my skin
so far under my skin
that I separate myself from it
quietly
I slip out of skin and leave my body
and it is as much an escape as it is
an attempt to
expand the picture
take in not just the world the actor is painting onstage
but a more complete landscape
the audience
and the building, the city, its history and the bones underground, all in an effort to understand what the trouble is.

I wonder if it is sometimes best to leave the body

O, yes, I’m troubled because I know the woman being invoked.
I have seen her before
as a ceramic figurine in an antique store
as a source of comfort in Gone With the Wind
as a smiling face on the front of a bottle of syrup.
I know the function of a large Black woman who takes care of people who don’t look like her in a nostalgic piece written from a white consciousness.

I am troubled that this woman has been so rudely invoked,
her body called forth that another might speak for it,
arranged and articulated as someone else saw fit.
My reluctance to stay comfortably inside of my own body
there in that theatre
had everything to do with knowing
knowing that this invocation of another woman
Black like me
was an invocation of me as well
I was up there on that stage
I was his as he saw fit
and it was a hurting thing.

I wonder if it is sometimes best to leave the body

Lest it be invoked, spirited into a narrative or conversation or season
as a kind of comfort object, a “look what we did,” stand in for real disruption, real reflection and change.

I wonder, I wonder. 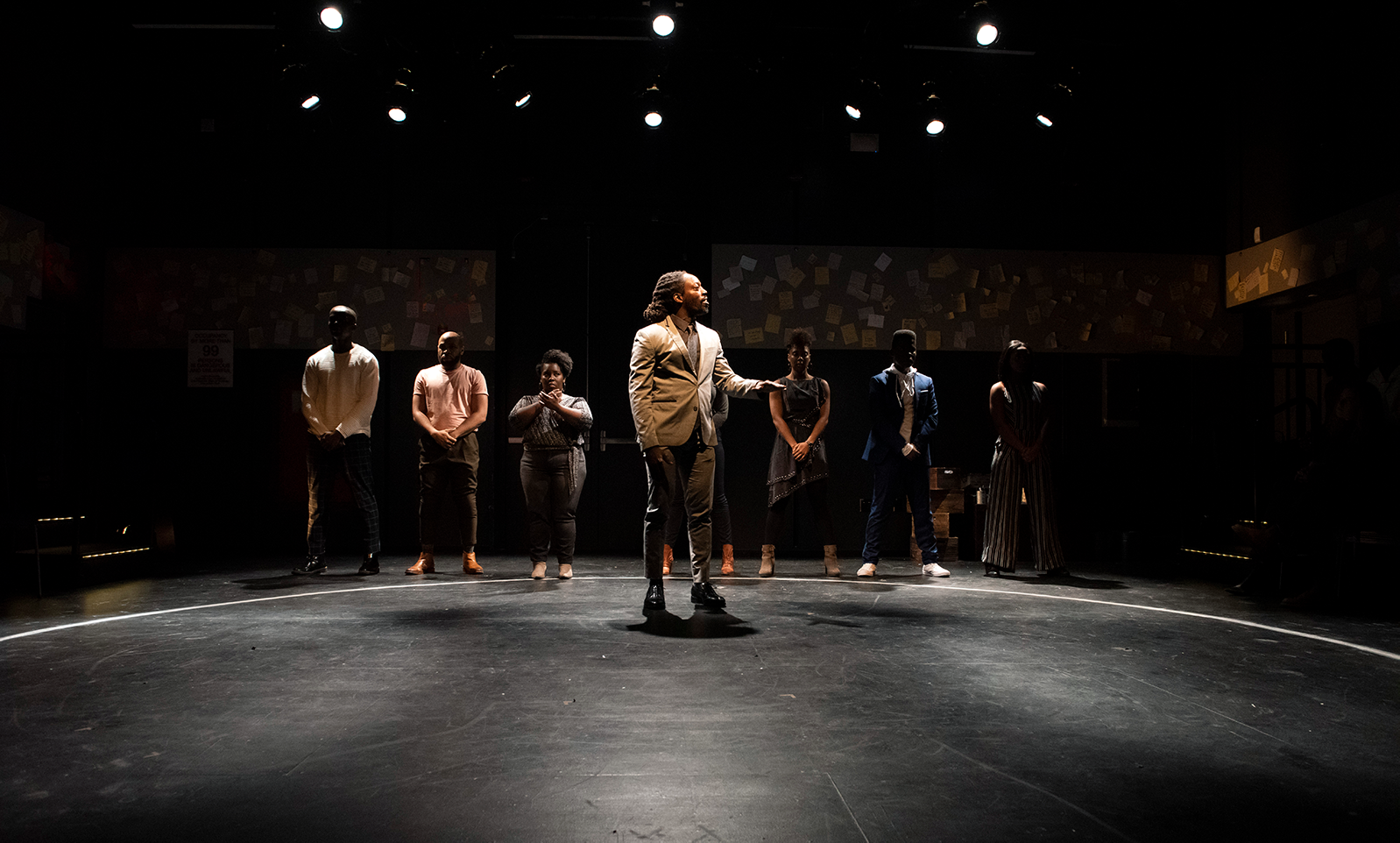 So, More recently
I am in New York City
I am watching American Utopia
David Byrne’s
truly wonderful concert theatre piece.
Byrne and company do a cover of Janelle Monae’s
“Hell You Talmbout”
a song honoring Black people who lost their lives due to anti-Blackness
And I yell the names of those killed along with the performers, “Emmett Till, Sandra Bland, Eric Garner”
I yell because I feel acknowledged,
cared for
here in my body
and it is joyous
I also yell to compensate for the other audience members who aren’t yelling, who aren’t saying anything.
The song ends and an angry white male voice finally does yell
And he says:
“What about all the cops that have been killed?”
and I blurted “shut up”
and the show moved on
but I wasn’t in my seat any more
y’all
that body
in the Hudson Theatre
In that mostly white place
in the loneliness of it
and the awkwardness of that man’s anger in response to
what felt like being cared for
That uncomfortable
outnumbered
body

I needed out of it

I yell because I feel acknowledged, cared for, here in my body and it is joyous.

To be clear
David Byrne hadn’t invoked the dead
callously
This felt like an invitation, rather than an invocation.
A call to bring the whole body on its own terms.

It is unfortunate that his invitation
caused a reaction that felt dangerous
to me,
This was ground zero
for a deeply discomfiting, powder keg of a confrontation
white people need to have with themselves.
And proximity to that, for me, wasn’t, will never be safe.
psychologically, spiritually or physically.

I am constantly
negotiating bodily presence
considering its implications
whether I’m chatting with an Artistic Director, answering questions at a Q & A or standing before a group of mostly strangers at the Under the Radar Symposium.

How to manage a fear/anger/rage-based desire to fly
the bodily coop
in a profession that I’ve come to
in order to fully occupy myself
and remind others to do the same?

How to be bravely and joyfully in this skin in this field, in this country at this time.

I know that I cannot leave this body.
I know that I don’t actually want to
my mama and my ancestors gave me a damn good body
a body which in and of itself is not the actually the problem. 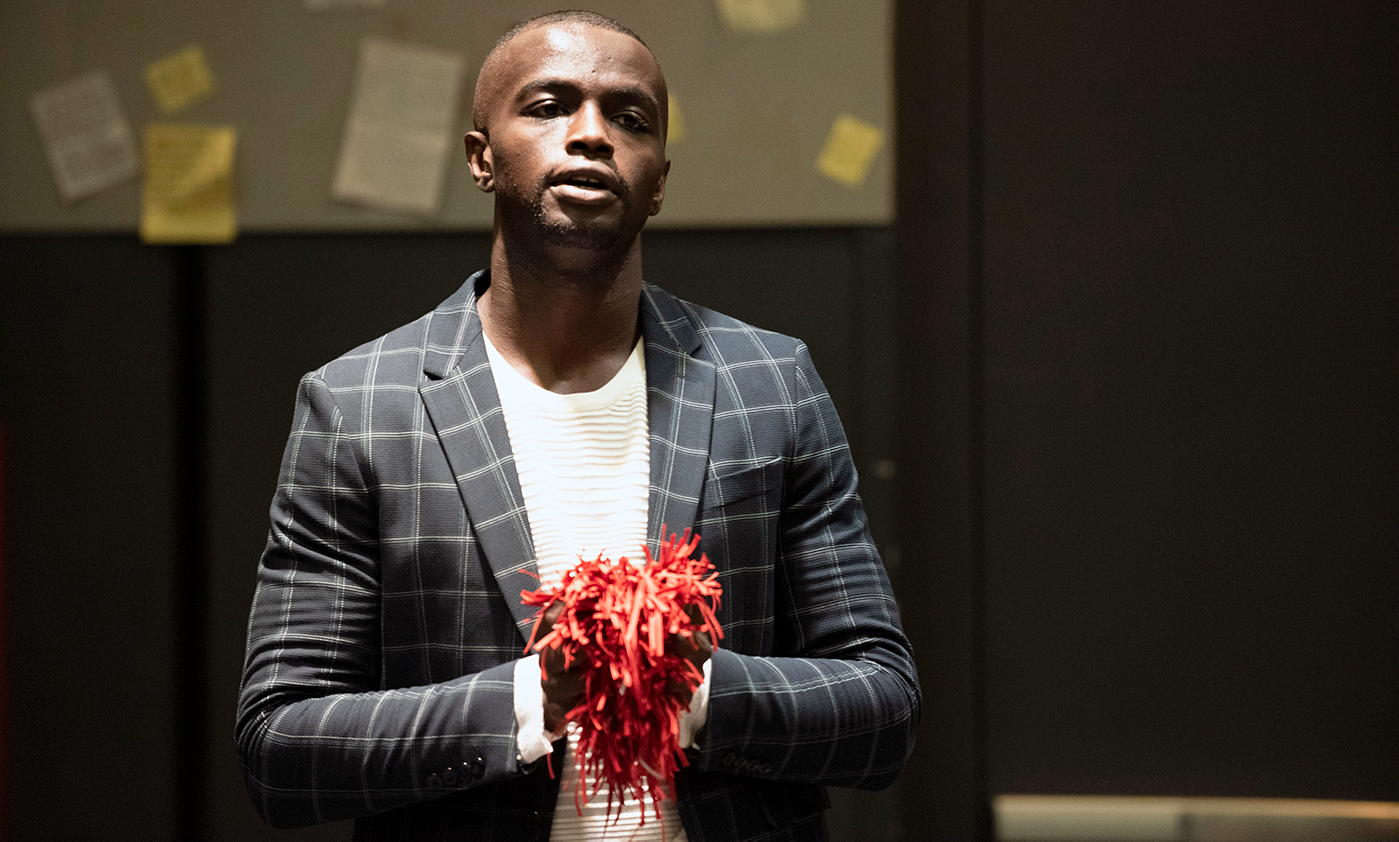 My strategy of late is to use my writing,
to bring the body along
in all of its complexities, its fears, its love and joy and rage
to nurture it
So I’d like the last words I leave you with to be a piece
entitled Red Eye about working through the challenges of staying in this body, writing through and about it, honoring it and allowing it to breathe to the edges of itself.

For those of you in possession of
a body, black
Be it the suit over your bones
or baby in or out of your belly
or in arms
or tugging at pant leg
or complaining from the back seat
Beware
Be wary
Baby is a weapon
You are a weapon-drawn
And some don’t like the way black body drinks the sun
So they dilute it
put a hole in it
or two, or three
Or enough bullets to call it
Riddle:
What’s black and polka-dotted and down but up in arms?
What’s black and polka-dotted and down but up in arms?
I’ll wait
I won’t
And don’t tell me bout a riot
When I’ve been looted since
they aimed at me in the ‘Sip
Belly ablaze when I see them, their guns on their hips
Or slowing down in their cruisers to watch me be weapon-y, I guess

I say anyone with gray hair and black skin and any love left in their hearts has earned a rocking place, a rest

They tell me we have the gift of flight
That we can ride the air home, if we want to
No one mentioned it would so often
be a redeye
a vigil
the passengers all screaming at the cost of the body bag
The bullet holes mouths screaming
with no teeth for naming the dead 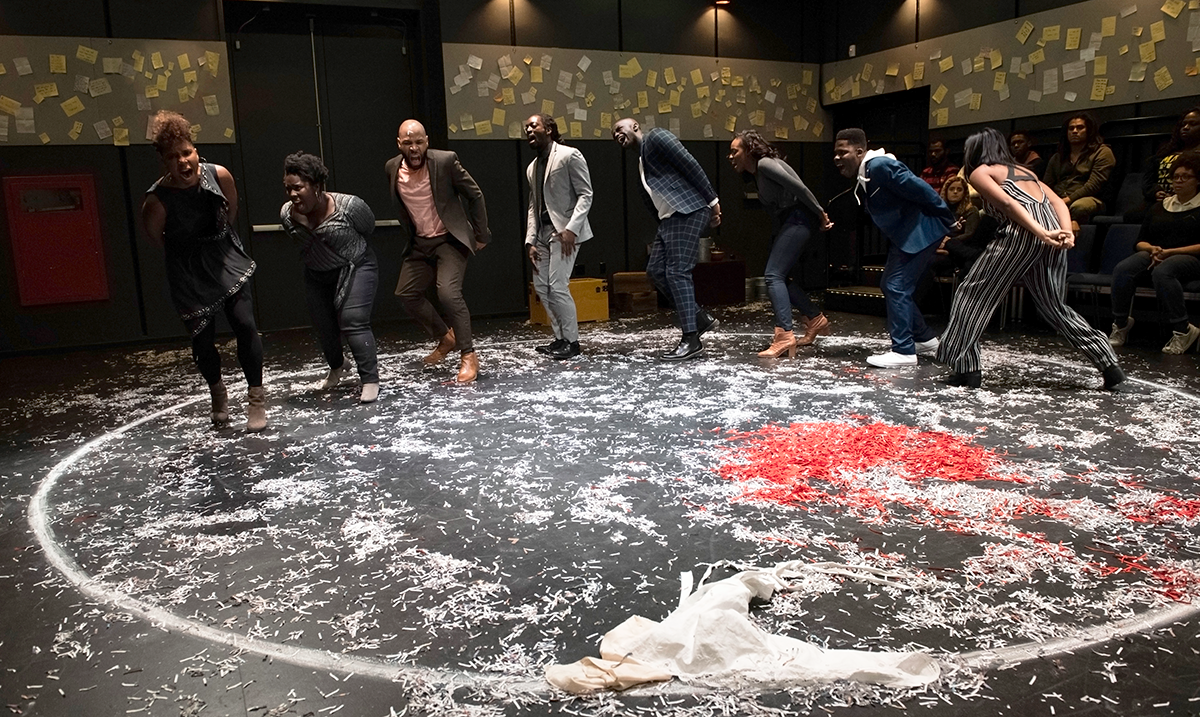 I say, do not look to the sky for an end to the storm
I say put your children to bed with a barbed nursery rhyme
I say anyone with gray hair and black skin and any love left in their hearts has earned a rocking place, a rest
I say the ones gone might be the lucky ones
I say, “What did I just say?”
I say I am tired of beating dead horses
I like horses
I say if we are weapons, we must all be on safety
There is not enough boom
There is not enough metal casing
for what we’ve been pushed to
There is not enough fist or hug or cry or slogan lullaby
what to do? what to do, what?
reach into back pocket for a slingshot or sword
but find only words
only words
the congress between sound and breath
words
one word in particular
“G-O-N-E”
Gone
the letters holding hands like Red Rover
don’t wanna let go of each other, ‘cause they know what it is:
Gone
The “G” flexing its muscles like a straight “G”, like thas what you gotta be
Got to be a thing impenetrable in the workspace, public place
Grit the teeth, grin and bear,
Giggle often, but not too often. Give ‘em their own grief
What to do? What to do, what?
Go back? Go be unborn, go be so small as to be unbeen
O
Can we say, O
like god in the corner tryna catch her breath
O,
they left him
O
in the sun like
O
like a nothing
and I’m god so
I ain’t never made
a nothing
GO N tell ‘em I said that
N-nevermind if they don’t listen
N-save your toil for your people
N-I didn’t put you here to convince them that you get to be here
Nah N Nope N we do not beg the rope
we cut it down
We gone
G.O.N.
E.
but not for easy, for the easy chair they thought you was
for the way you bit them when they sat
for the elephant in the room
for
Black is not a color, but a hue
but a thing you wake up in the morning and do
A shade for stopping the sun when it forgets
And the frat boy sons when they forget
And the old “news” when it forgets
that you can hang a thing from an unsuspecting tree
that you can polka dot its torso
that you can call its babies missiles
but you cannot undo it
not now, not never
you cannot make it gone
So we gon’ get along, not like happy
not like peace
more like there is gravel in my knees but Imma dance it out
carry the casket, plant the roses, read the plaque
me and my
black body
me in this fine suit
in this fine suit
and the words and the words and the words that come with it.

You are a beautiful soul.  You are a teacher.  You are wise beyond your years.  What wonders will you bring us next?

You are a beautiful soul.
You are a teacher.
You are wise beyond your years.
What wonders will you bring us next? I ask not to put pressure on you, but to offer humble encouragement and love.

Thank you for printing and streaming this. I have only read, but never seen, Aleshea Harris's work, and her speech and reading help illuminate what's so extraordinary about it: strength, grace, fearless clarity, brilliant sentences cleaned to the bone. How the artist can make occasion of leaving her body to assert the body. I hope everyone has a listen.

I greatly appreciate this, Todd. Thank you.